US and China Battle for Blockchain Dominance

China is winning the US in the numbers of the blockchain-related patents filed between 2014 and 2019, but who are the top patent owners in each country?

When Chinese President Xi Jinping announced strong support for blockchain technology last month, pundits suggested that China would soon overtake the United States in dominating blockchain innovations. Our patent research at the Blockchain Center of Excellence at the University of Arkansas finds that China is already winning the Intellectual Property arms race against the U.S.

We examined blockchain-related patents that were granted from January 2014 to October 2019 by China’s patent office, the National Intellectual Property Administration, or CNIPA, and the U.S. Patent and Trademark Office, or USPTO. During this period, the CNIPA awarded 2,218 blockchain patents compared to 227 by the USPTO. 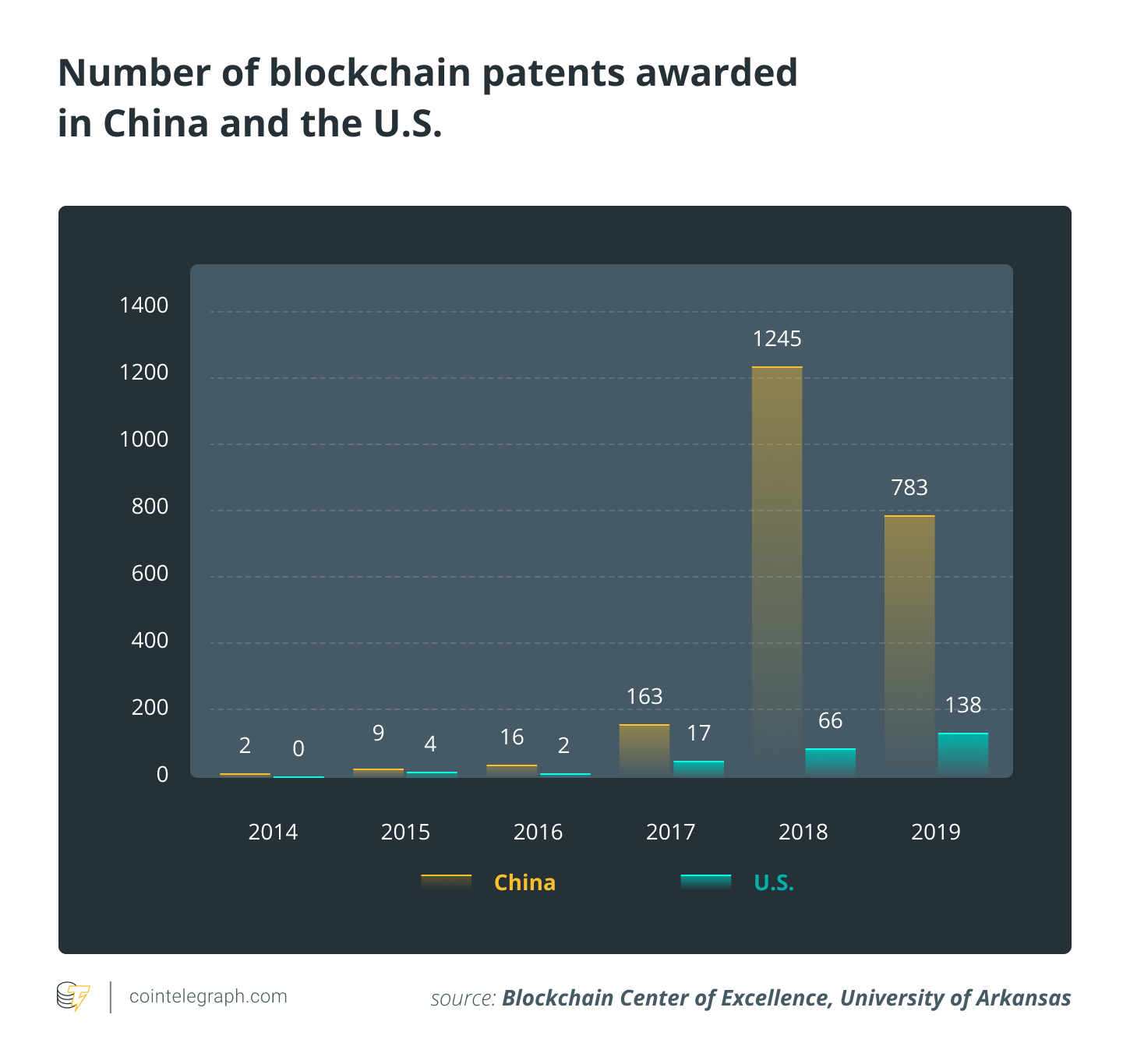 The difference in numbers between U.S. and Chinese patents is slightly misleading, as the CNIPA awarded nearly 40 blockchain-related patents to U.S.-based global companies such as Goldman Sachs, IBM, Intel, JP Morgan, Mastercard, Microsoft and Visa. In contrast, the USPTO has not awarded blockchain-related patents to any Chinese-based organizations. This pattern holds more widely, according to a study published by the Federal Reserve Bank of Saint Louis, which found that only 4.17% of 1.2 million Chinese patent applications were filed overseas in 2016, whereas 43% of 521,802 U.S. patent applications were filed overseas. Perhaps U.S. organizations worry more about protecting their IP overseas than Chinese organizations do, or perhaps this trend reflects a distrust in the patentability of the Chinese applications made overseas, as only 6.31% of the overseas patent applications filed by Chinese firms are granted.

Furthermore, the Chinese patent office expedited the patent process more quickly than the U.S., taking just six months on average from patent filing to acceptance compared to 20 months in the U.S. Several explanations for this are possible: China may have more resources devoted to patent processing, or China’s patent process might not be as rigorous as it is in the U.S. Meredith Lowry, a patent attorney for Wright Lindsey Jennings, shared in a private interview:

“Blockchain patent applications in the US patent process face additional hurdles to show the invention is patentable subject matter and more than the use of an algorithm. The bar for patentable subject isn’t as high in other countries like China.”

We also analyzed the data to determine the top categories of innovations protected by the blockchain-related patents, and the top patent owners in each country.

The IP being protected

The CNIPA and USPTO require patent applicants to use the International Patent Classification for categorizing their patent filings. Each patent typically includes multiple IPC codes. In both countries, the three most frequently occurring IPC codes for blockchain-related patents were G06, H04 and G07: 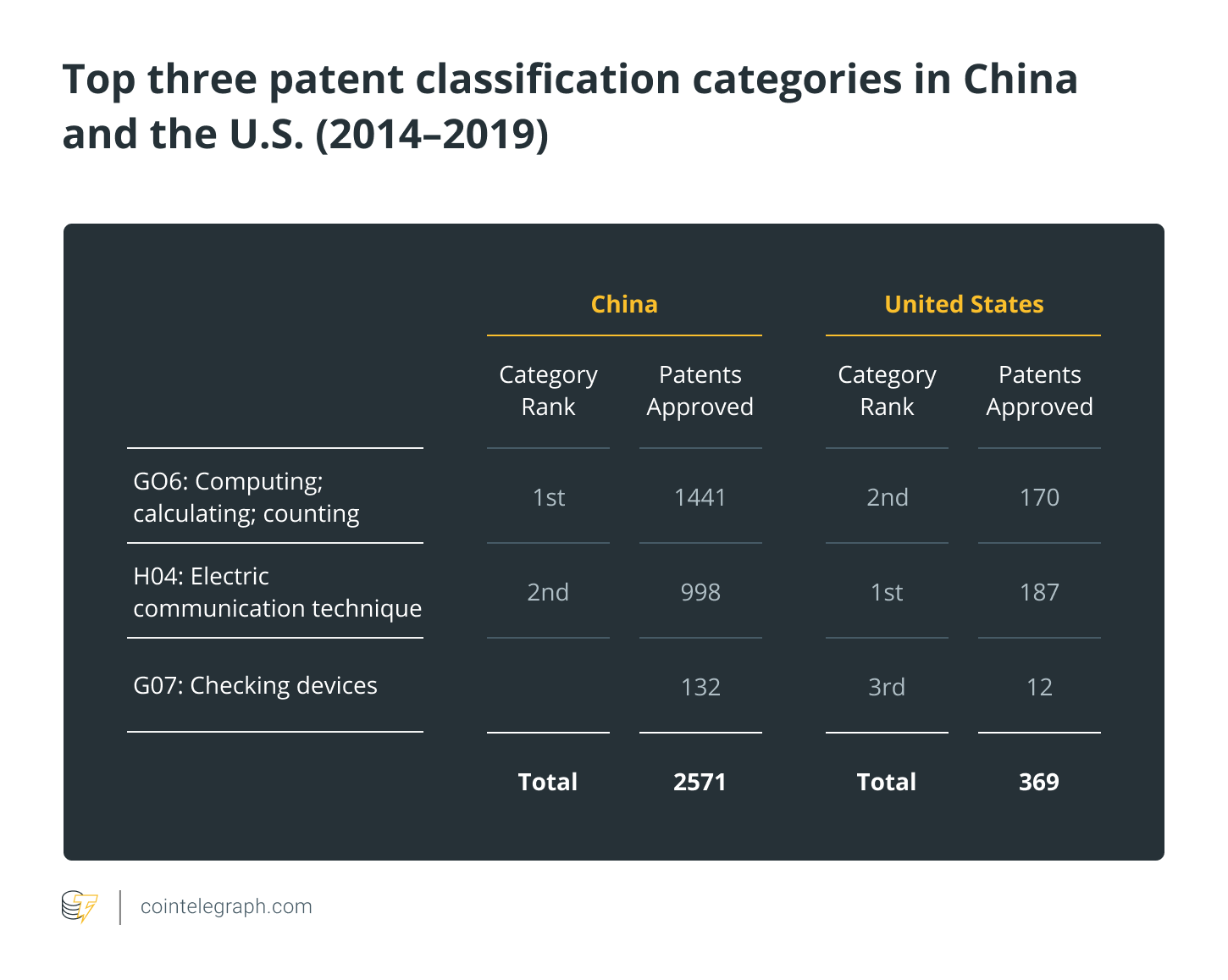 G07 (Checking-devices) — covers innovations associated with registering the receipt of cash or tokens, the handling of coins or valuables, metering tolls and fares, generating random numbers for lotteries, systems for voting, and more. 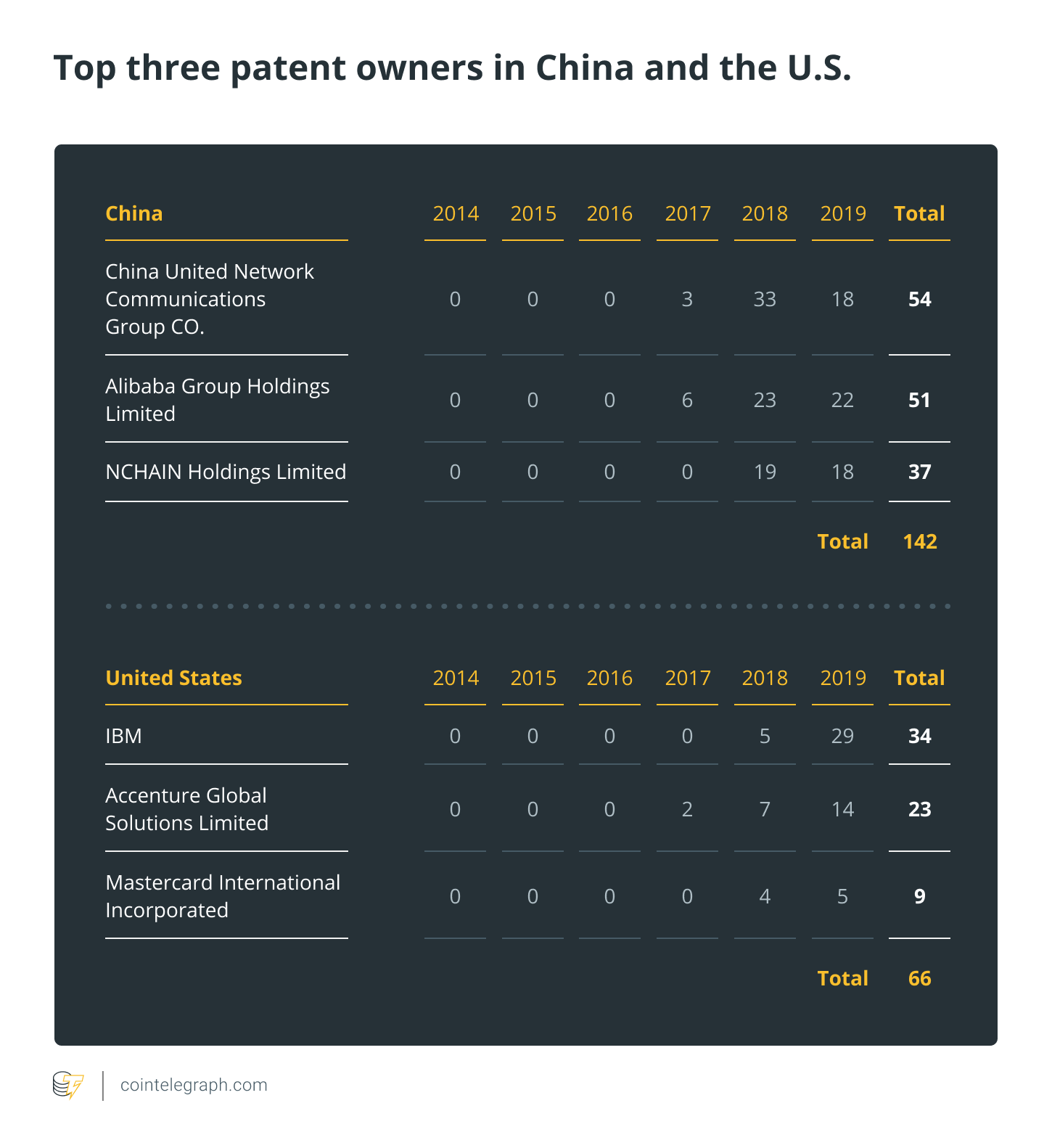 This November, China signaled that it may strengthen its IP laws. The rate of blockchain-related patent protection in the country is accelerating, with the sheer number of China’s blockchain-related patents outpacing the rate of the U.S., but contributing to these numbers are U.S. companies filing patents in multiple locations to increase their IP protection globally. Therefore, while China may appear to be accelerating beyond the U.S. in patent approvals on the surface, multiple leading global companies operate in both countries and protect their intellectual property as such.

Blockchain-related patents are just one indicator of a country’s blockchain dominance. Favorable regulations, the number of job vacancies, the prevalence and level of financial support provided to blockchain-startups, active participation in global policy-making bodies, and the number of blockchain solutions in production are other metrics being explored by the Blockchain Center of Excellence at the University of Arkansas.

Mary Lacity is a Walton professor of information systems and the director of the Blockchain Center of Excellence at the University of Arkansas.

Zach Steelman is an assistant professor of information systems at the University of Arkansas.

Jacob Yates is a graduate student in the information systems department at the University of Arkansas.

Jia Wei is a Ph.D. student in the information systems department at the University of Arkansas.

The Blockchain Center of Excellence (BCoE) is housed in the Information Systems Department of the Sam M. Walton College of Business at the University of Arkansas. The BCoE was officially launched by U.S. State Governor of Arkansas, the Honorable Asa Hutchinson, on Aug. 1, 2018. The center’s vision is to make the Sam M. Walton College of Business a premier academic leader in blockchain application research and education.