Why are Potential Forks not Accounted into the Bitcoin Futures Price

Holders of futures contracts will lose potential gains from Bitcoin forks that occurred after the contract was settled.

New Bitcoin forks became a sensitive issue after CME launched Bitcoin future contracts. Their average price does not include new offsprings as CME has no fork policy yet.

Since being created by Satoshi Nakamoto nine years ago, Bitcoin has generated polarized attitudes. Supporters trust that Bitcoin heralds a new era in human civilization, while the executives of the established financial institutions qualify it as a bubble and predict that cryptocurrencies “almost with certainty will come to a bad ending," as billionaire Berkshire Hathaway chief Warren Buffett said Jan. 10.

What are the futures for

One of the reasons why financial executives are perplexed might be that Bitcoin is a retail phenomenon and wasn’t initiated by financial hubs but was invented by a mysterious programmer that enabled the peer-to-peer transition of financial assets bypassing the institutions that monopolized this functionality for literally hundreds of years. Governments usually regulate these institutions rather heavily to prevent abuse of their status and due to this regulation, there are almost insurmountable obstacles to hold and trade Bitcoin and other cryptocurrencies that are now being traded relatively freely by retail investors. In particular institutional investors often trade not the underlying assets but just a derivative on this asset and delegate the settlements to a central authority like the clearinghouses to settle those derivatives. This kind of trade happens in the commodity space where contracts on an oil barrel are futures contracts (the shortest being for one month). These contracts are essentially what determines the oil prices and eventually the gas price we pay at the pump.

To mitigate the situation and give institutional investors access to Bitcoin asset CME introduced Bitcoin Futures contract Dec. 17, 2017. Of course, the introduction of Bitcoin futures had other goals. “That’s a very important step for Bitcoin’s history... We will regulate, make Bitcoin not wild, nor wilder. We’ll tame it into a regular type instrument of trade with rules,” Leo Melamed, chairman emeritus of CME Group said.

However, futures enable institutional investors to short Bitcoin much more efficiently and thus create an alternative for Bitcoin bears to express their view selling the futures and using this shorting Bitcoin. Also, the futures contract contains safeguards against large daily price swings. 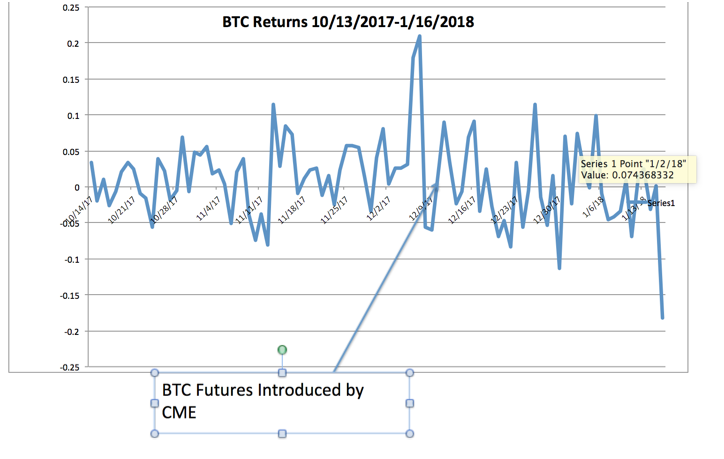 Of course, it’s still a short time since the futures were launched and it will be interesting to watch whether it will indeed tame Bitcoin volatility as some financial executives hope and will make Bitcoin more palatable as an asset to hold for banks and other financial intermediaries. Personally, I am confident that the clearinghouses are experienced enough to handle the daily Bitcoin volatility and put enough safeguards checks and balances to prevent any risk for the clearinghouse itself when they handle Bitcoin settlement issues. It does seem that the Bitcoin bears prevailed since the futures were launched.

Another interesting feature of the futures is that they are settled in cash rather than delivering actual Bitcoins. While it is natural to expect this to occur due to the effort of establishing Bitcoin wallets and trade them physically, we will see very soon that this creates some other issues that involve another feature of Bitcoin due to its nature of being essentially a software product, which are forks.

Consider for a moment a future on a stock paying a dividend or a bond. The clearinghouse settles the futures including not just its price, but also any potential dividend or any interest paying on a bond. The similar thing occurs with a stock split or a merger event during the future active trading. The clearinghouse will adjust the price of the future for a merger or a split and will settle the claim accordingly.

The fork takes place when Bitcoin code is being changed and anybody who owned Bitcoin at this particular point in time adds with another cryptocurrency which is its offspring. It is similar to a family situation when a new child is born and becomes a family member instantly.

However, the average Bitcoin price doesn’t reflect these new members of the Bitcoin family. Consider for example the two big splits of Bitcoin into BCH (Bitcoin Cash) and BTG (Bitcoin Gold) the owners of Bitcoin ended up owning these new currencies. But the Bitcoin index doesn’t incorporate the price of these two currencies into its price action. Thus, people who would buy futures will lose these potential gains that Bitcoin holders would have gained if the fork occurred when the futures contract started to trade. The same happens with a process called airdrop where a new crypto asset takes its genesis block to be a certain block in the Bitcoin Blockchain. In this case, Bitcoin holders own immediately this new coin that was airdropped to their laps.

There will be numerous Bitcoin forks in the near future. Some forks and airdrops occur during the futures launch and thus need to be accommodated in the futures contract. Note that there would be no issues like that if Bitcoin futures would be settled physically. Indeed, one would simply buy Bitcoin at the moment of the contract inception and deliver them physically to the contract buyer at the time of inception. Any airdrops or forks occurring during the futures contract would be transferred to the future buyer automatically with the physical Bitcoin.

What fork is viable

CME is aware of the issue but seems not have a well-defined policy to handle this issue. To wit, we read on the FAQ page of CME:

“CME is developing a hard fork policy for capturing cash market exposures in response to viable forks. The policy may involve cash adjustments to position holders or listing related futures that are also issued to position holders.”

It isn’t clear at all what viable fork means. The physical Bitcoin holders will enjoy these forks and it will be their decision and not of the clearinghouse, whether they like to claim these extra coins or not.

The failure of the clearinghouses to incorporate forks may lead into fiduciary conflicts once Bitcoin future holders realized that these potential forks are not accounted into the future settlement practices (as this create an unfair advantage for the Bitcoin futures and will lead to arbitrage opportunities).

The question of forks and futures may lead to unexpected developments for future Bitcoin traders. These issues underscore the unique traits of Bitcoin as a financial product and show the challenges that the regular financial institutions face on their crusade to tame and regulate Bitcoin.

Assistant Professor in Residence Department of Finance at University of Connecticut

His previous experience includes positions of head of research and senior quantitative analyst at risk and asset management corporations.

Disclaimer. The views and interpretations in this article are those of the author and do not necessarily represent the views of Cointelegraph.