A new World Economic Forum study has revealed how blockchain technology can be used to prevent corruption in public procurement.

Worldwide, governments devote an estimated $9.5 trillion each year to public procurement — an average of approximately 15% of national gross domestic product. This money goes to public goods and services such as the construction of roads and the delivery of healthcare services, but it also tends to line the pockets of corrupt government officials, corporate executives and others that are involved in the procurement process. The problem is almost universal.

Both the United Nations and the Organization for Economic Cooperation and Development estimate that between 10% to 30% of a public contract’s overall value is commonly lost to corruption. These numbers have led the World Bank to conclude that “the curtailing of procurement corruption may represent one of the most effective economic development programmes that a country can adopt.”

While the extent of procurement corruption varies from country to country, the causes are common: inadequate record-keeping, low public accountability, repeat and close interactions between the private sector and government officials, and centrally controlled processes. These combined factors create an opaque, complex, high-value process vulnerable to corruption.

A new report from the World Economic Forum titled “Exploring Blockchain Technology for Government Transparency: Blockchain-Based Public Procurement to Reduce Corruption” is the most comprehensive study of the feasibility and value of blockchain technology for public procurement and for public-sector corruption in general.

The WEF has partnered with the Office of the Inspector General of Colombia and the Inter-American Development Bank to create a public, permissionless Ethereum-based blockchain procurement system, with technical advice from experts at blockchain security firm Quantstamp and the University of California, Berkeley.

The proof-of-concept, developed by engineers at the National University of Colombia, is designed to select vendors for Colombia’s school meals program, Programa de Alimentación Escolar, which feeds low-income youth — and has become the center of various corruption scandals in recent years involving exponentially inflated prices and the non-delivery of tens of millions of meals.

The project’s goals are twofold: to identify the value of blockchain for increasing transparency and accountability in public procurement, and to accelerate similar research and experimentation worldwide.

The scale and scope of procurement corruption is not new. Countries and localities have attempted to stymie this behavior for years by codifying standards, prohibitions and formal processes, but this has often only raised the costs of corruption rather than fully deterring it. Weak rule of law or limited will on the part of politicians often stunts the efficacy of such measures.

For instance, blockchain makes it more difficult to remove records of bids and public comments or to alter bid or tender offers once submitted. This decentralizes decision-making, oversight and record-keeping; enhances transparency; and devolves power away from authorities that might be prone to corruption.

The WEF-led proof-of-concept enables vendors and tenderers to conduct the vendor bidding and evaluation processes on the Ethereum blockchain, while also allowing third parties such as journalists and citizens to monitor and flag risky activity in real time. The software includes several automated features such as minimum bidding, public comment periods and automatic “red flags” to alert the Office of the Inspector General of Colombia to potentially corrupt activity. 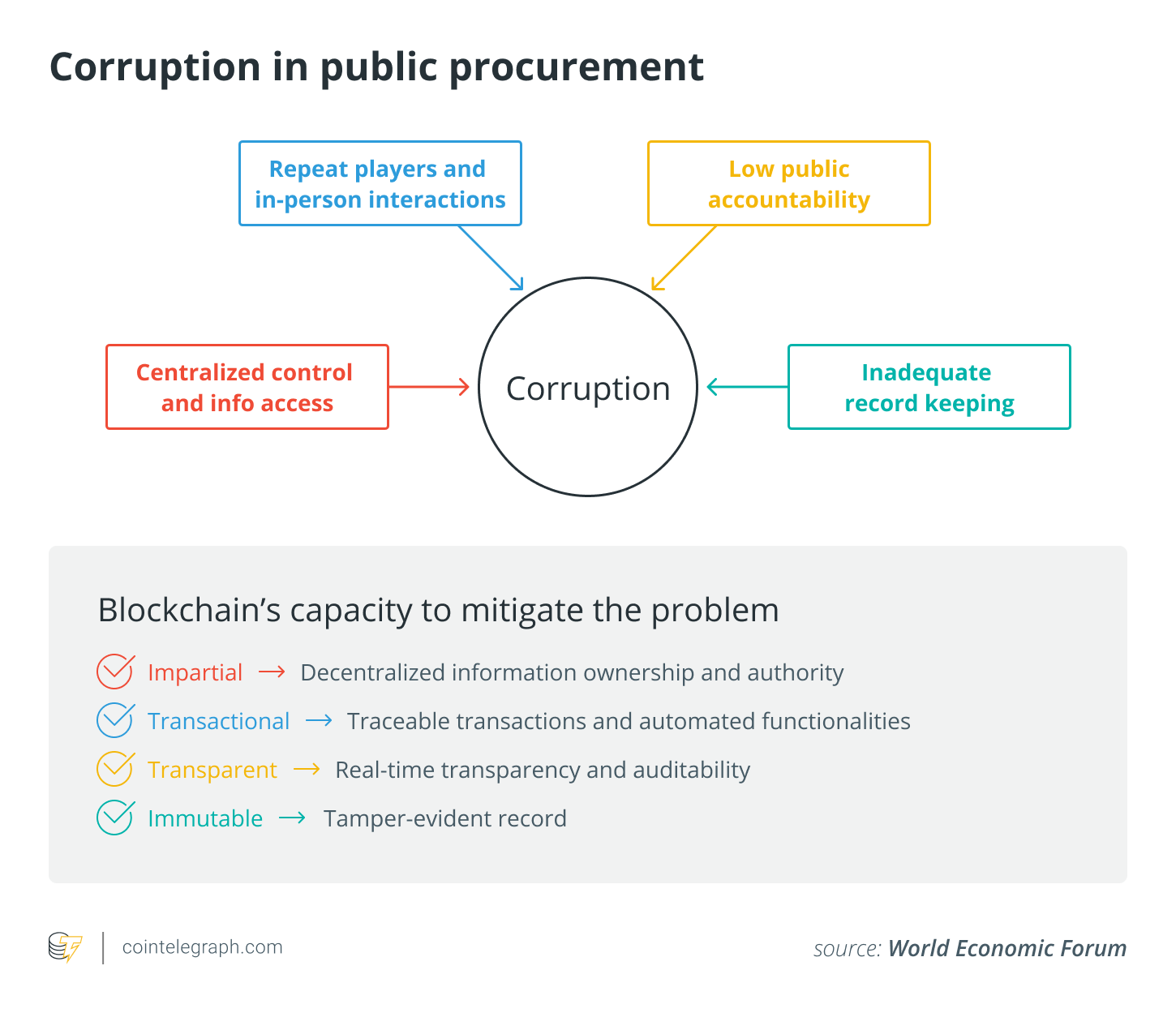 During the COVID-19 pandemic, many governments have turned to emergency direct contracting to procure necessary health services and supplies. These contracts are particularly high risk, as they are awarded very quickly in the absence of a competitive auction. Next-generation electronic procurement systems, including those developed with blockchain, can record direct-contract activity in a permanent, secure, automated manner to potentially reduce corruption risk going forward.

Blockchain’s anti-corruption potential is enhanced when paired with an engaged audience. The WEF’s report emphasizes the importance of mobilizing people to become procurement monitors. Organizations such as Partnership for Transparency Fund and Transparency International have developed models for “monitorships,” which can be adopted across the board or on a case-by-case basis.

Lessons for the future

Blockchain is not a panacea and cannot fully prevent corruption everywhere. No technology, including blockchain, can eliminate corruption risk from certain human activities that occur outside the electronic platform, such as bribery or collusion. Cultural change, informed policymaking and sustained political buy-in are essential to meaningfully reduce corruption in procurement.

Despite the benefits, there are multiple challenges with fully public and permissionless blockchain networks such as Ethereum.

The presence of cryptocurrencies can pose problems ranging from legal or regulatory roadblocks to unintentional exposure of vendors’ identities during anonymous bidding. Additionally, fully public and permissionless blockchains have limitations regarding transaction scalability, but this may be addressed by future technology developments or alternative configurations involving “private” or “hybrid” networks.

When it comes to public procurement, blockchain’s promise warrants cautious enthusiasm and thoughtful experimentation. The overarching goal of the WEF’s report is to provide hopeful yet realistic analysis of how blockchain can fill the current void in accountability and transparency in public procurement, and it offers governments a technical framework for doing so.

This article was co-authored by Ashley Lannquist and Rachel Davidson Raycraft.