Yes, Even Bitcoin HODLers Can Lose Money in the Long-Term: Here’s How

Crypto trader and on-chain analyst Philip Swift explains how blockchain data points to a new Bitcoin all-time high and how it can be used to enhance short and long-term trading strategies.

Since dropping from its 2019 high at $13,800, Bitcoin (BTC) has been in a rut which has led to the price retracing roughly 43% to $7,800. Traders would take a more conservative approach and describe the last two months of price action as consolidation which is typical after parabolic advances. With the 2020 Bitcoin halving event approaching, the ultimate question on the minds of most investors revolves around whether or not Bitcoin will reach a new all-time high on the heels of the event and more importantly, when.

While every trader has his or her own style, most keep a vigilant eye on Bitcoin charts and attempt to exploit every long and short opportunity that Bitcoin’s market cycles provide. This practice can be time-consuming, tiresome and inefficient based on one’s proficiency at trading and the ability to weather the manipulative fiascos that frequently rock the crypto market.

As the crypto market matures, new technical analysis methods are being developed and traders are also beginning to pay more attention to the on-chain data produced by blockchains. To dig deeper into this topic, Cointelegraph spoke with equities and crypto-market analyst Philip Swift. Swift is also the creator of the Golden Ratio Tool and the Bitcoin 2-Year MA Multiplier.

Cointelegraph: Philip, thanks for taking the time to sit down to have a chat about crypto trading and technical analysis. What brought you to crypto?

Philip Swift: My route into crypto was less exciting than buying drugs on Silk Road, unfortunately!  In 2016 I was looking to invest some profits from real estate investing. Traditional market investment opportunities looked awful as they were offering poor returns for reasonable amounts of risk. I also felt uncomfortable with the inevitable handing over of fees to some broker or money manager who probably wasn’t great at their job.

I then came across Bitcoin and saw it had a much more appealing risk/reward opportunity.  As I learned more about it, I could see the benefits from a social perspective too, which I thought was really interesting. So I fell down the Bitcoin rabbit hole.

CT: Why is it important to view Bitcoin’s price action on a logarithmic scale? Should this always be done in your opinion?

PS: There is real value in viewing Bitcoin’s price action on a logarithmic scale because it allows you to see two things. First, you can see the adoption curve of Bitcoin over its 10-year history as more and more people begin to use it.

Second, you can see that contrary to the popular belief that Bitcoin has only had a recent price explosion that was a bubble, Bitcoin has actually gone through three full market cycles in its 10-year history. This context is useful for helping us forecast potential price action and also for managing emotions as we enter into the next market cycle.

I definitely don’t think a logarithmic scale should always be used. Thinking in absolutes is very dangerous, particularly when it comes to trading and investing. There are times where a standard scale is very useful, particularly when trading small time frames in certain market conditions.

CT: Given the unique insight on-chain data provides, do you think traders' reliance on the investing strategies and tools used for traditional financial markets is a misapplication? Why should traders focus more on on-chain data?

PS: I think of all these different approaches like tools in my toolbox. If I want to build something brilliant, I need to have a range of tools to achieve that.

I find it strange in the world of Crypto Twitter that there are people who say they only use technical analysis (TA) or only use on-chain analysis. Why would you limit yourself when clearly these different schools of thought all have value when they are applied correctly? So I use a combination of TA, on-chain metrics, and market cycle analysis. This process has consistently worked very well for me over time.

My sense is that there are people in the space who have either learned from ‘experts’ used to operating in traditional markets like the Forex or they aspire to be the traditional type traders having watched some TV shows and movies. For these reasons, they think that Bitcoin should also be measured using traditional tools from these traditional markets.

This is way off the mark in my opinion as Bitcoin has characteristics that are very different from other asset classes, and more importantly, it is not yet an established asset class. It is going through a period of adoption. This makes it function differently to macro asset classes and established currency markets.

CT: How would you interpret the current Market Value Realized Value Z-score (MVRV-Z score) and could you explain this to a simpleton such as myself?

PS: The current MVRV Z-score is at levels we would expect at this point in the market cycle.  In my opinion, there is still plenty of upside to go before we reach the cycle high.

MVRV Z-score highlights periods where the price of Bitcoin is extremely over or under-valued relative to its historical ‘fair value’. The indicator has been able to pick Bitcoin’s major cycle highs to within two weeks!

When it enters the upper red band on the chart, this indicates that price is overvalued and most likely needs to have a major pullback on big timeframes - otherwise known as entering a bear market.

“If this decreasing Fibonacci sequence pattern continues to play out as it has done over the course of the past 9 years, then the next market cycle high will be when the price is in the area of the 350DMA x3.”

According to your indicator, this is around $19,971. Some traders say a bull market does not officially start until an asset breaks through the previous all-time high. At this price, your indicator would be showing overstretched conditions so barring a massive blow-off top, what can one forecast past the 350DMA x 3?

PS: Like any moving average, the Golden Ratio Multiplier moving average lines move with Bitcoin’s price. So as price increases, so do they. Therefore, by the time the price gets to the $20,000 area, the 350DMA x 3 will be much higher. In effect, the price will be trying to catch up with the 350DMA x 3, and it is unlikely to do that until they are both well above $70,000 this cycle in my opinion.

PS: Unlikely. The halving is still 7 months away and we are seeing a lot of accumulation happening on-chain.

I do believe this upcoming halving event will create significant buying demand for Bitcoin.  Markets are not efficient, and we are not rational players. I think the halving event hype coupled with global macro issues we are seeing play out as we head towards it will create hype for Bitcoin that will push the price up as people FOMO in.

CT: In your most recent tweet, you said that you believe that Bitcoin is currently in phase A of the Puell Multiple. Is this a multi-year measurement/cycle? 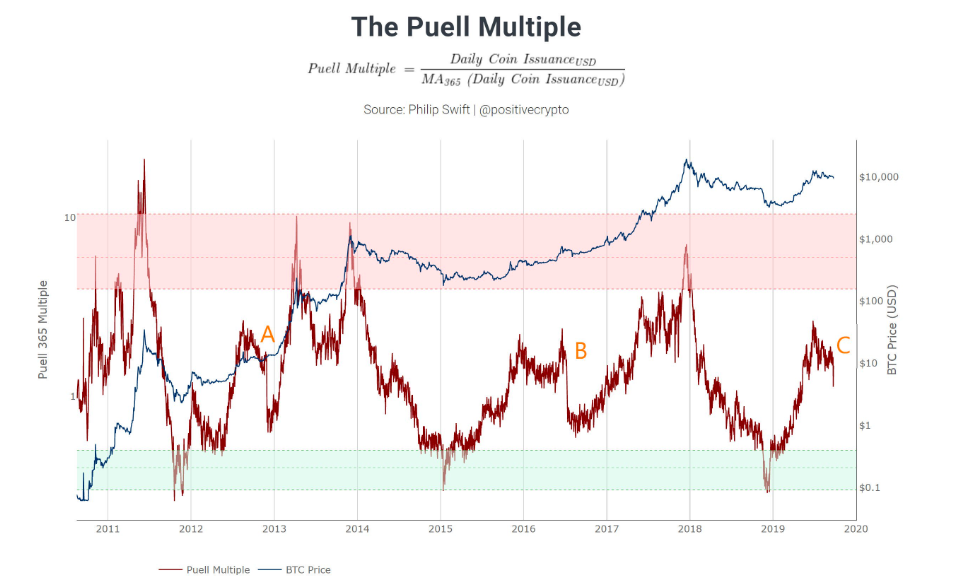 PS: Yes it is. I was highlighting how, just like the previous two major Bitcoin cycles, we have entered a period where the Puell Multiple became over-extended and had a sharp dropdown. Both of those periods were then followed by Bitcoin price action going sideways for 6-8 weeks. I am not saying that has to happen now, but it is certainly noteworthy.

CT: What else do you want to tell me? Are there any additional hot topics, statements or opinions of importance that you think the world should know?

PS: In the world of Bitcoin there seem to be two main groups of people. Hodl’ers and traders. HODL’ers think you should hold forever and constantly dollar cost average in. Traders try to grow their Bitcoin stack using leverage.

Both of these approaches have issues. HODL’ers have to endure multi-month bear markets with 80%+ drawdowns on their holdings. So it’s quite inefficient and actually poor from a risk management perspective. The vast majority of traders (over 90%) lose money in the long run so that approach is not ideal either..

I believe that there is a smarter approach for most people. Strategic investing, which requires just a basic understanding of Bitcoin’s market cycles and its economics. This can help you avoid buying towards the top and selling towards the bottom of Bitcoin’s cycles.

Over the course of Bitcoin’s history, people who have used this approach have significantly outperformed all HODLers and the vast majority of traders. 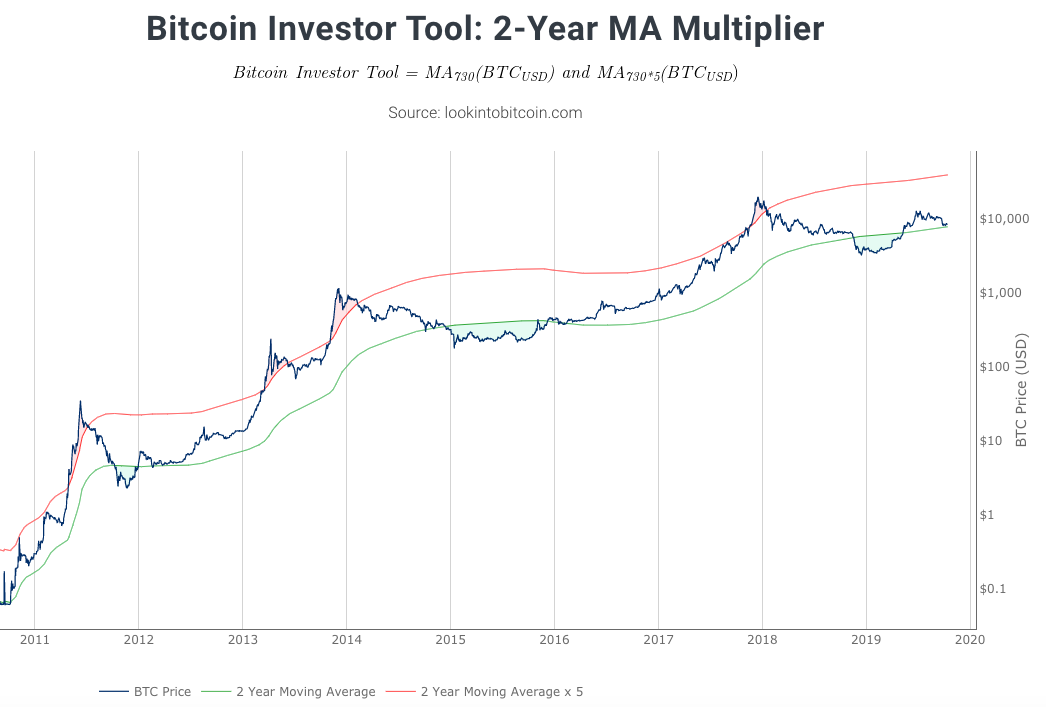 Here is a really simple chart from my site that brings this to life. If you bought Bitcoin whenever the price was under the green moving average and then gradually sold out in the red zones above the red moving average, then you would have achieved outsized returns relative to most other Bitcoin investors and traders.

PS: I swing trade crypto and also make long term investments in Bitcoin. I don’t want to spend my days stuck in front of the computer screen staring at 15-minute charts so I choose to swing trade on multi-week time frames which suits my trading style.

CT: What is the ultimate purpose of Look Into Bitcoin?

PS: I want it to help regular people (not just large institutions) invest better in Bitcoin, as I believe Bitcoin is a once in a generation opportunity that is leveling the financial playing field.

By providing free-market cycle and on-chain valuation tools for regular Bitcoin investors, it helps them see more clearly and think differently about Bitcoin prices, and ultimately supports their Bitcoin investing.