5 National Currencies That Bitcoin Is Absolutely Crushing in 2020

The price of Bitcoin has surged by 50% to 128% against global currencies since early 2020 and analysts believe the trend could continue.

Data from a pseudonymous analyst compared the performance of Bitcoin (BTC) against global currencies since the start of 2020.

The data shows that BTC has increased by anywhere between 50% to 128% against the world’s major currencies. 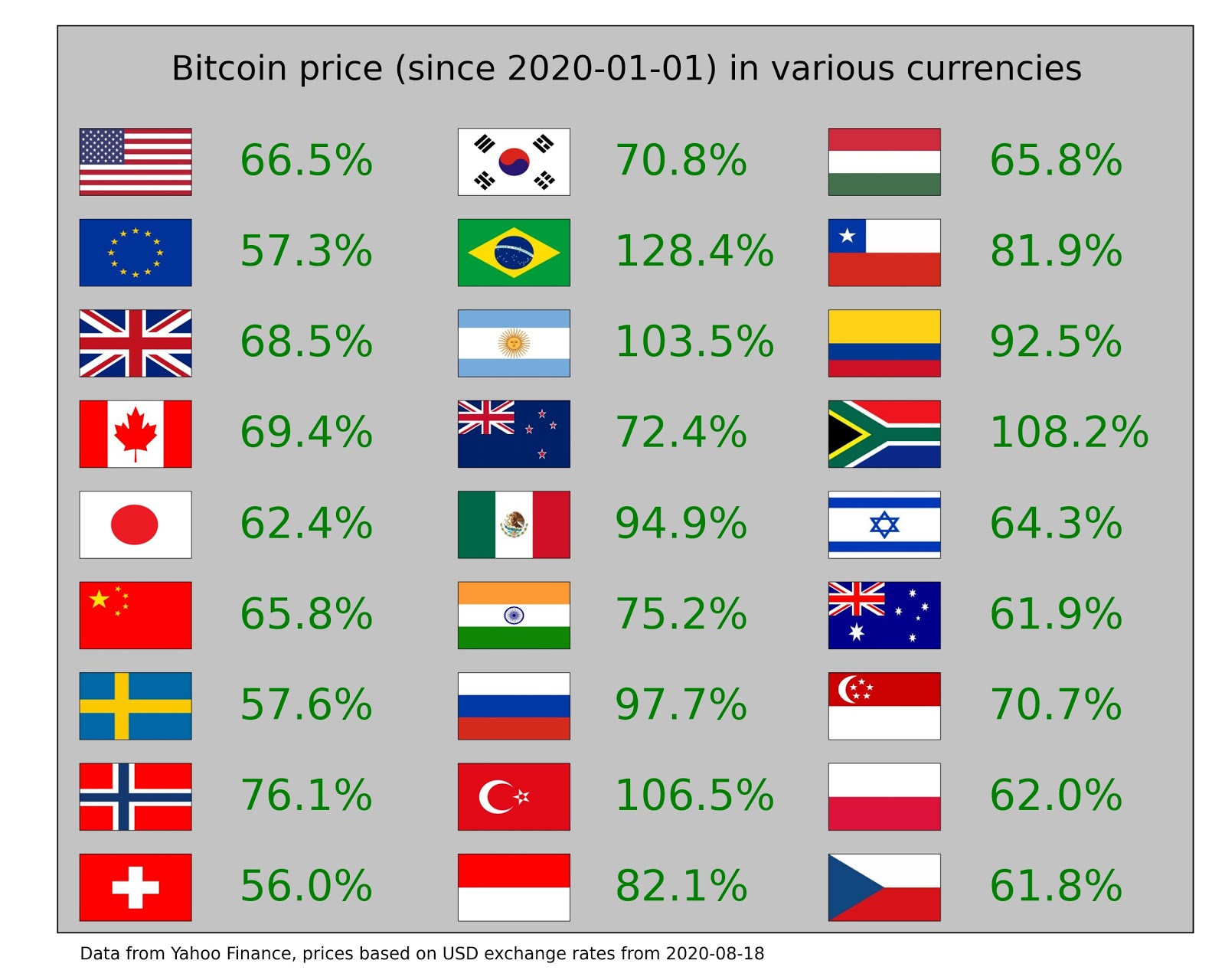 The performance of Bitcoin against various global currencies. Source: DriftwoodPalace

“Update on the bitcoin price in various currencies and on various time frames. Lets start with YTD, the price is up from 57% in the EU to 100% plus in Argentina, Brazil, SA, Russia, Turkey etc (prices are based on the official USD exchange rate and may differ in reality).”

Bitcoin has performed significantly better against devaluing currencies, often with high rates of inflation. For instance, the Argentinian peso recorded 53.9% in 2019, its highest in over 30 years.

Against the Brazilian real and the Argentinian peso, Bitcoin posted 128.4% and 103.5% gains. The digital asset also recorded a 56% to 69% gain against reserve currencies like the U.S. dollar and the euro.

The Venezuelan bolivar also declined strongly against Bitcoin amidst uncontrolled hyperinflation. The unstable nature of many economies in Latin America frequently results in new all-time highs for peer-to-peer Bitcoin transactions in Venezuela and Argentina.

Since early 2020, prominent Wall Street investors, like billionaire Paul Tudor-Jones have described Bitcoin as a potential hedge against inflation. MicroStrategy, a billion-dollar publicly listed firm in the U.S., also recently purchased $250 million worth of Bitcoin as its primary treasury asset.

Bitcoin’s strong performances against all global currencies year-to-date could strengthen the argument that BTC is evolving as a store of value.

It is also important to note that Bitcoin price dropped more than any other commodity or index in March 2020. This occurred as the price declined by 65% to $3,596 on BitMEX.

Despite this, Bitcoin has rebounded strongly, recording a yearly high at over $12,400 and posting a 244% year-to-date gain at the month’s peak. Emphasizing the strong momentum of BTC, the pseudonymous analyst added:

“Bitcoin crashed harder than any other commodity or index earlier this year. Very few indices or assets have regained those losses. Meanwhile, Bitcoin is up in all currencies from mid-February. From 6% in Sweden to 50% in Brazil and Zambia.”

Based on the positive price trend of BTC and its strong performance against reserve currencies, strategists believe Bitcoin could continue to prosper amid the current economic uncertainty.

“So where does bitcoin sit in the economic cycle? During periods of economic uncertainty and dollar weakness, Bitcoin is likely to benefit in the same way as gold. If bitcoin’s financialization continues, it will be unable to remain insulated from the financial system.”

Some analysts argue that rather than Bitcoin surging substantially in value, the value of global currencies dropped against BTC and other assets like gold.