Bitcoin price is gathering strength as its dominance rate bounced from recent lows, possibly bringing a close to the altcoin season.

As the price of Bitcoin (BTC) soared above $11,000 on Sept. 16, the altcoin market suffered mightily. Some analysts believe that profits from the extended altcoin and decentralized finance (DeFi) rally may have cycled into BTC.

After major bull cycles or the so-called “altseason”,the dominance index of Bitcoin tends to recover. When it does, it often leads BTC to outperform many altcoins in the global market. 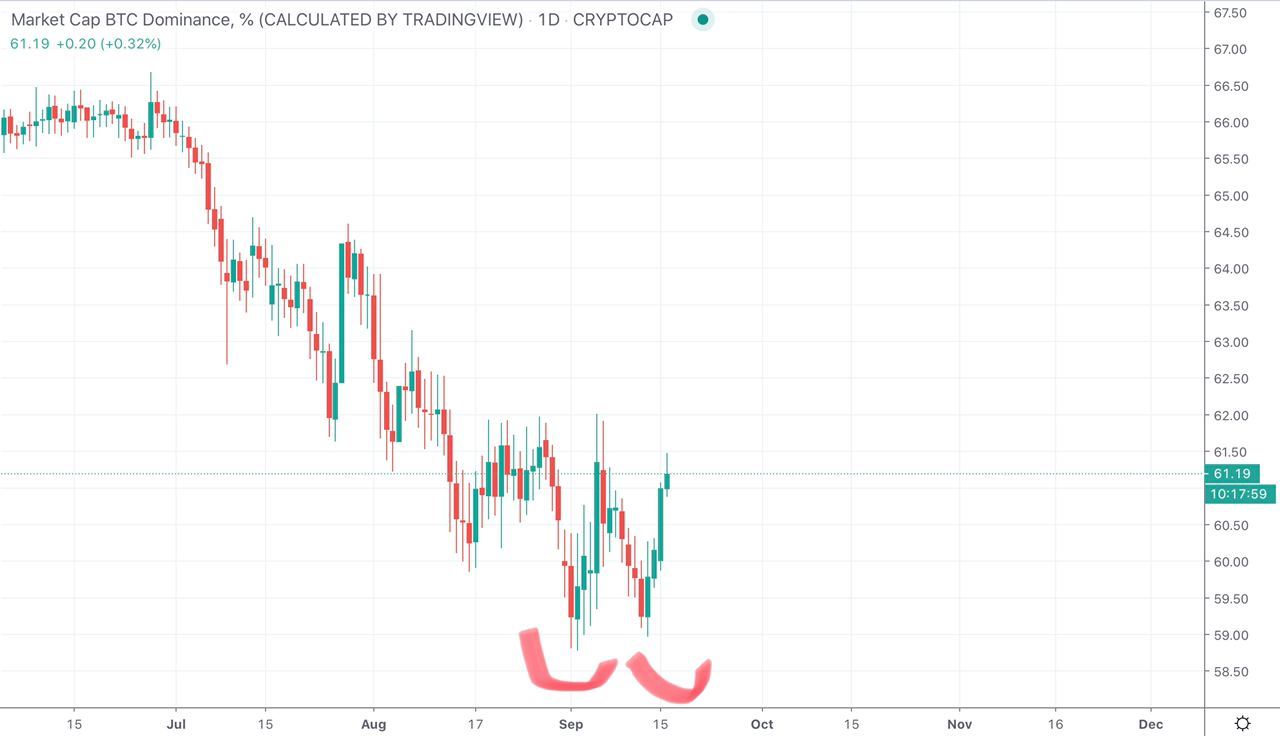 In the past two weeks, Bitcoin’s dominance has seen a double bottom, rebounding from 59% to 61%. If BTC’s dominance index continues to recover, it could cause altcoins to underperform against BTC in the near term.

Bitcoin dominance strengthened just two weeks after internet entrepreneur and podcaster Adam Curry talked about Bitcoin on the JRE podcast with Joe Rogan. While on air Curry praised BTC as a store of value and highlighted its 10-year track record as the markets’ dominant cryptocurrency.

Curry said he sold a lot of Bitcoin when it was valued at around $900. He said:

“But let me tell you, the apocalypse is coming and you're going to need a Bitcoin. At least one. I was very anti-Bitcoin until I sold a shit load of them at $900, and I could have [made a lot of money].”

Since then, Bitcoin’s price has increased to above $10,000, peaking at $20,000 in late 2017. Given its resilience throughout the past decade, Curry said that BTC is a reliable store of value.

During the podcast, Curry and Rogan briefly discussed Bitcoin and alternative cryptocurrencies that compete against it.

According to Curry, he initially denied BTC and its potential as a store of value. Eventually, as ten years passed, he said the resilience and survivability of Bitcoin changed his mind. He told Rogan:

“I got them for nothing; people just gave it to me in the beginning. I denied it, and when you look at ten years, f*ck all the altcoins and all that stuff.”

In response, Rogan asked if there is any risk in being Bitcoin remaining as the overwhelmingly dominant cryptocurrency. He asked why other cryptocurrencies cannot coexist, which would offset potential risks of manipulation.

Rogan noted that all currencies, likely referring to traditional currencies, have seen some sort of manipulation. He stated:

While Curry did not go in-depth about altcoins, he simply said the Bitcoin’s ten-year track record speaks for itself. There were major cycles where many altcoins failed throughout the past ten years, and BTC remained dominant.

Since late 2017, Bitcoin, Ethereum, and XRP have remained the top three cryptocurrencies. Apart from the three, the rest of the top 20 have frequently changed. Curry explained:

How will BTC perform in Q4?

Historically, the performance of Bitcoin in the fourth quarter has been mixed. In two of the past four years, BTC saw a major correction at the end of the year. 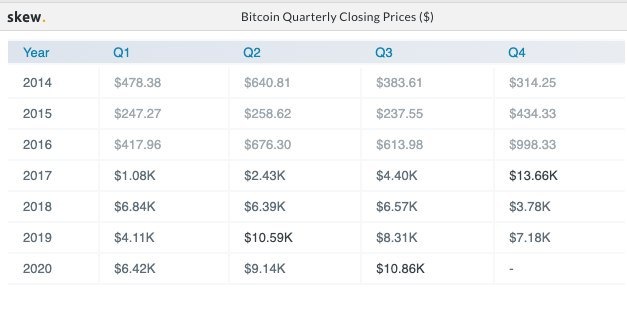 Given that the Bitcoin halving took place in May and historical data shows BTC tends to rally 15 months after a halving, it seems likely that Q4 2020 will be slow.

The general expectation amongst analysts is that the opening quarters of 2021 will see a stronger performance from Bitcoin.