The pattern of liquidations on BitMEX and historical funding rates point toward a serious short squeeze in the medium-term.

Despite the gloomy short-term price trend of Bitcoin (BTC), the pattern of liquidations on BitMEX and historical funding rates point toward a possible serious short squeeze in the medium-term.

On March 12, a huge drop in price liquidated over a billion dollars in Bitcoin long contracts, causing BTC to drop to as low as $3,600. A similar squeeze could occur against bears or shorts in the upcoming months, which may cause a strong upsurge.

The bitcoin market is now showing peak fear, wait until it subsides

Amid the coronavirus pandemic and rising jobless claims across the globe, investors are expressing fear towards the stability of all asset classes including stocks, cryptocurrencies and precious metals.

It has resulted in panic-driven selling throughout March, and while Bitcoin has rebounded since falling below $4,000, prominent technical analysts like DonAlt have identified the $4,000 to $5,000 range as a potential retest area for BTC in the short-term.

The two indicators that traders are currently observing to predict the medium-term price trend of BTC are the funding rate of BTC futures contracts and the liquidation pattern on BitMEX.

On a perpetual swap, which is a futures contract with no expiration date, a system called funding is used to balance the market. Simply put, when there are more investors shorting Bitcoin or expecting it to go down, the rate of funding turns negative. Then, shorts have to pay long contract holders a portion of their position.

For instance, as of April 16, the funding rate on BitMEX is 0.0564%. This means short contract holders have to compensate longs with 0.0564 percent of their position three times in a day. 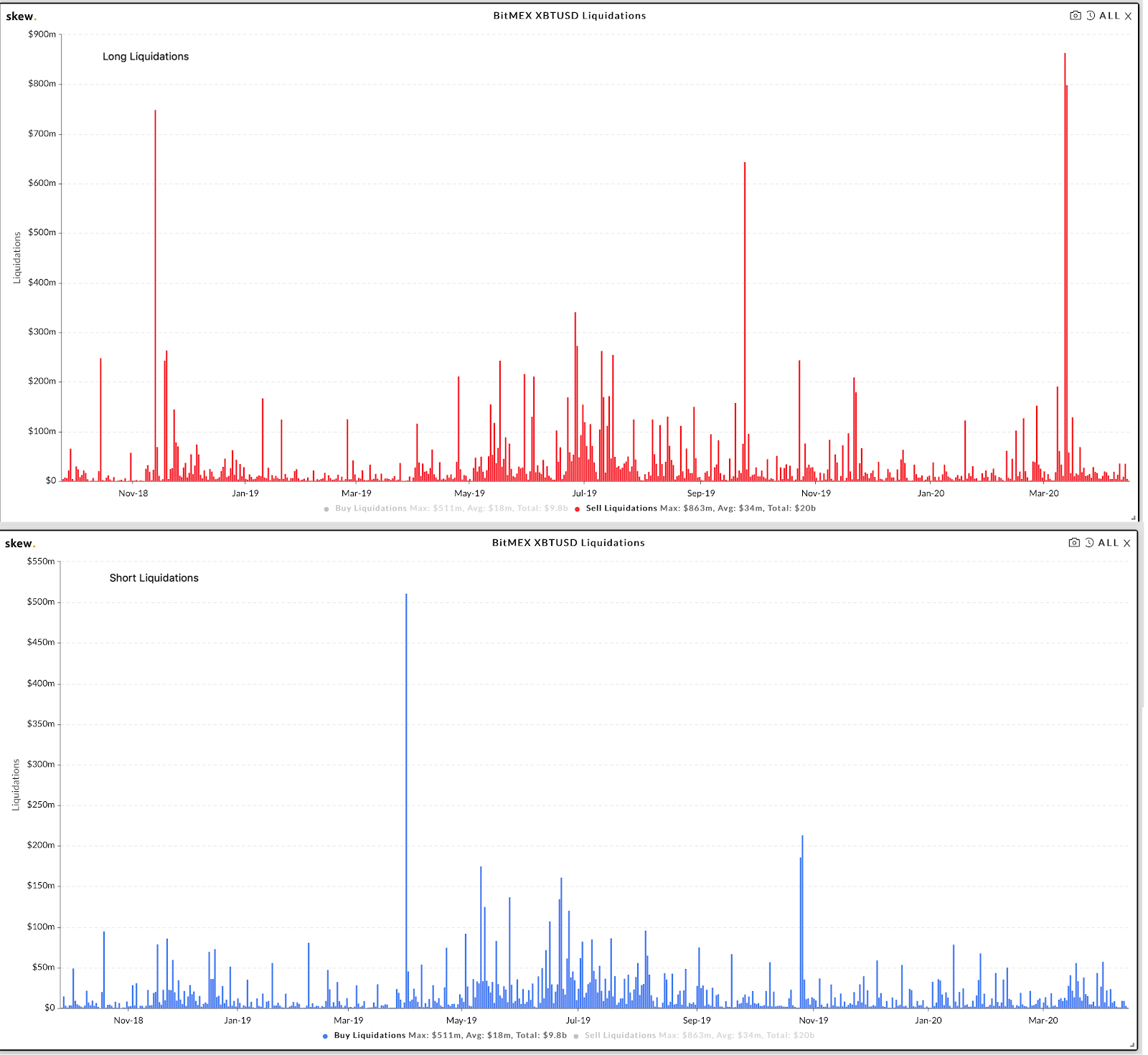 Historically, the Bitcoin price has shown that the market can remain irrational for prolonged periods of time. Even if shorts are paying longs, if the price of BTC continues to move down, bears continue to apply selling pressure on the market.

In the medium-term, however, it leaves the market vulnerable to a sudden surge up with a cascade of short contracts.

In October 2019, for example, the price of Bitcoin suddenly surged from $7,500 to $10,600 in a span of 48 hours. Dubbed the “Xi pump,” it occurred when Chinese President Xi Jinping encouraged the development of blockchain technology in China. 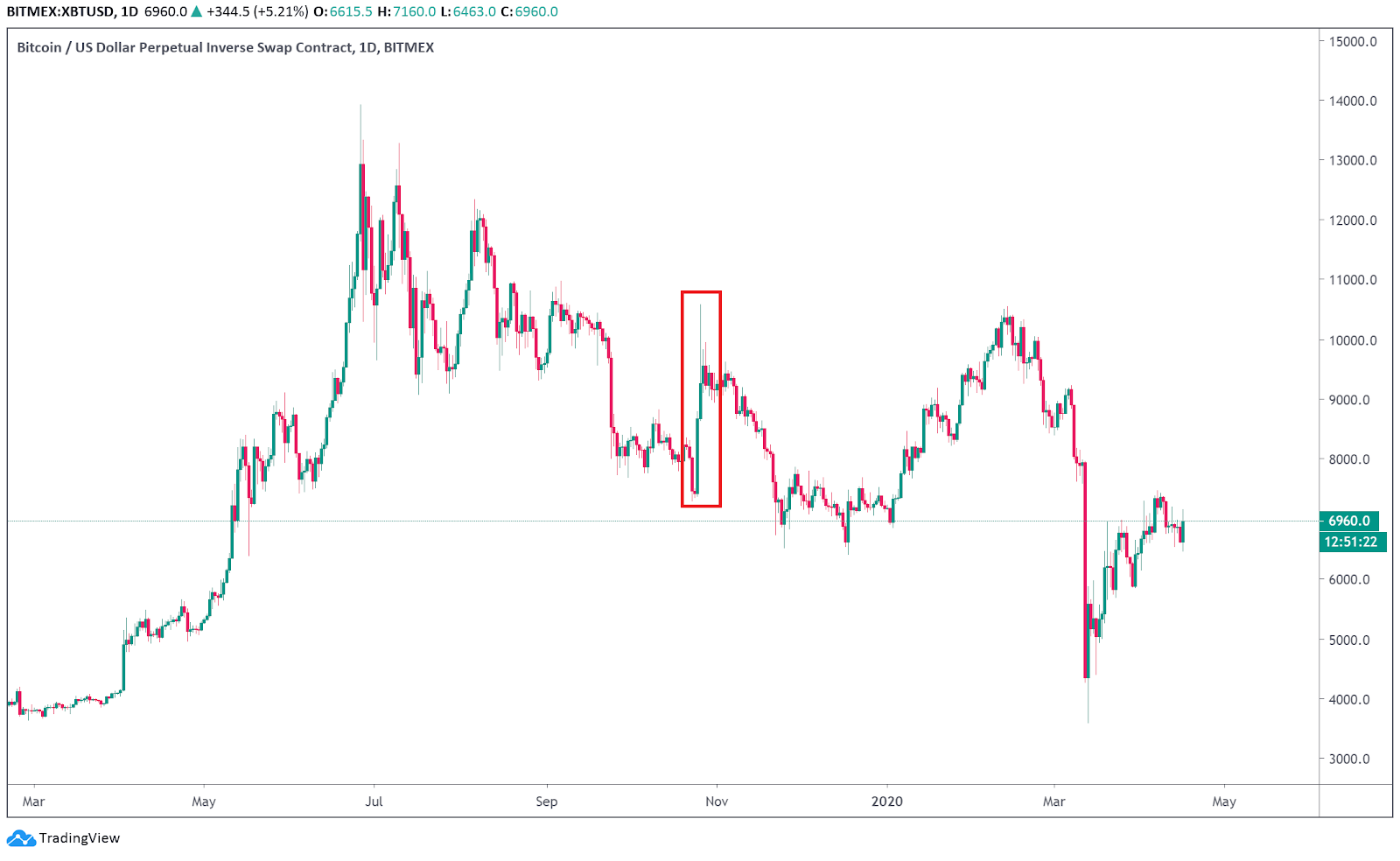 Some analysts said that the abrupt increase in price was caused by a surge of buyers in China, but data showed that it was a cascade of short contracts that caused the upsurge.

If a similar movement occurs in the next few months as funding rates continue to move to negative, there exists a strong possibility that Bitcoin price could see a quick recovery to high resistance levels.

Various data points such as the swift absorption of sell orders immediately after Bitcoin’s fall to $3,600 suggest that the bottom of BTC is in at $3,600, but it remains vulnerable to testing low support levels in the $4,000 to $5,000 range.