Bitcoin and What Happens in the Aftermath of Bubbles

This article will explore 2 questions: Has bitcoin bottomed yet? And, what does the aftermath of major bubbles bursting look like and its implications for price?

This article will explore 2 questions: Has bitcoin bottomed yet? And, what does the aftermath of major bubbles bursting look like and its implications for price?

Thursday, bitcoin had a relief rally in sympathy with most other commodities as the Swiss National Bank (SNB) de-pegged the Swiss Franc from the Euro. This was a surprise move by the SNB but was necessary as being pegged to the Euro has been killing the Franc as the Euro has been sinking against a strong dollar due to Eurozone economic malaise. A previous article written on this subject can be found here. There is a lot of speculation as to why they did this now and the prevailing sentiment is twofold: the SNB expects the European Central Bank (ECB) to launch massive QE and this will further weaken the Euro so they wanted to get ahead of the curve as the SNB has had to purchase a ton of Euros to protect the Franc and their threshold has been reached.

As a result, the Swiss Franc surged and the Euro weakened, while the USD strengthened. All commodities (gold, oil, copper, silver, bitcoin etc.) also saw a sharp rise in anticipation of QE coming.

Has bitcoin bottomed yet?

The simple answer is no, not yet.  As mentioned above, bitcoin had a relief rally yesterday in due to the SNB news in combination with an extremely oversold chart. A relief rally generally occurs in a downtrend, when buyers show up and shorts cover but it is nothing more than a countertrend move and is fleeting at best. As the chart below shows, the downtrend is still intact and yesterday on the daily chart shows a failed attempt to put in a bottom in the form of a Bullish Engulfing Pattern (see here).

As a result, there is more downside. Price discovery is a process, but its looking likely at the very least we get a retest of the 160 level, with an eye on 133, which is the Mt. Gox low as mentioned previously. Volume has picked up along with volatility, so the bottoming process continues. 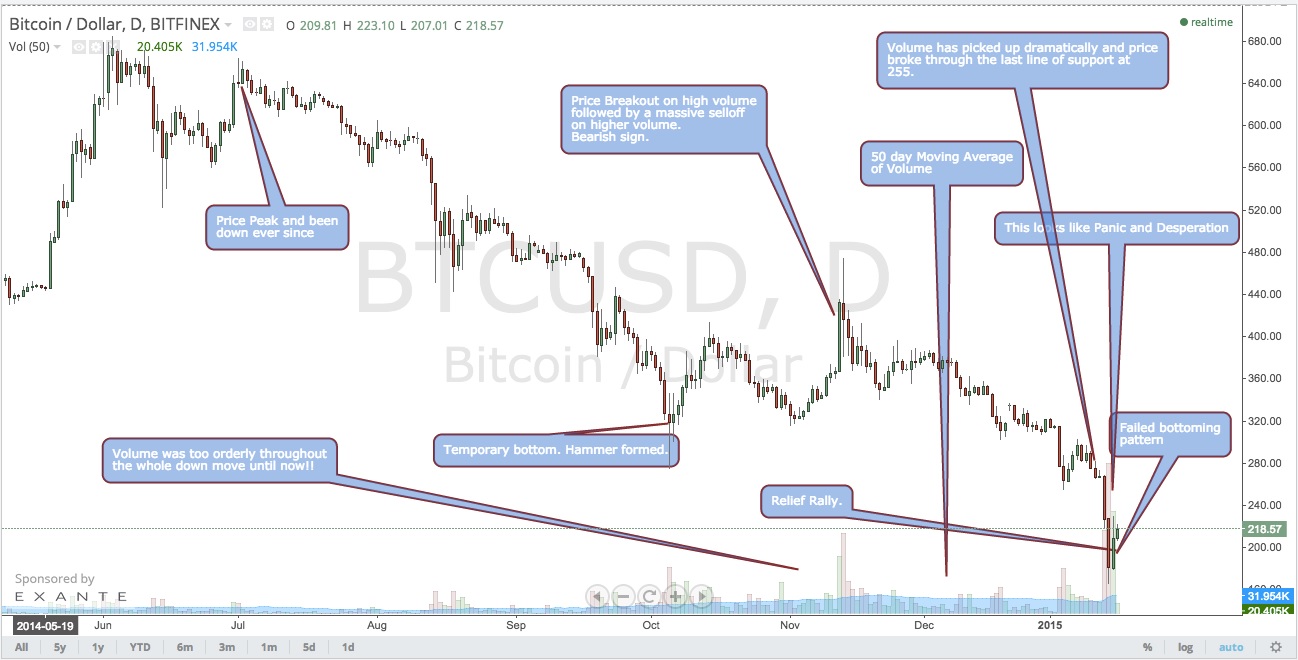 Generally, price precedes news.  With this downtrend strongly in place, one can assume whatever news comes out will be bad.  As we continue to bottom, the bad news can be assumed to be in the price and will not lead to a leg lower. In other words, it will be “priced in.”

What the news will be is anyone’s guess, but certainly something is overhanging Bitcoin. In fact, one sign of a bottom will be when bad news comes out and price doesn’t react to it or reacts in an opposite than most people expect.

What happens in the aftermath of bubbles?

The bitcoin price bubble has burst - that can not be denied. This is a major bubble that has popped as bitcoin has broke through many major support levels on its way down, and is still sinking. Below are charts of other major bubbles and unless one is visually impaired the similarities should be striking. The reason I display these charts is because the aftermath of price bubbles is similar for all of them, and bitcoin should be no different.

This is the Japanese real estate bubble: This is the Dutch East India Company:

And finally this is bitcoin: 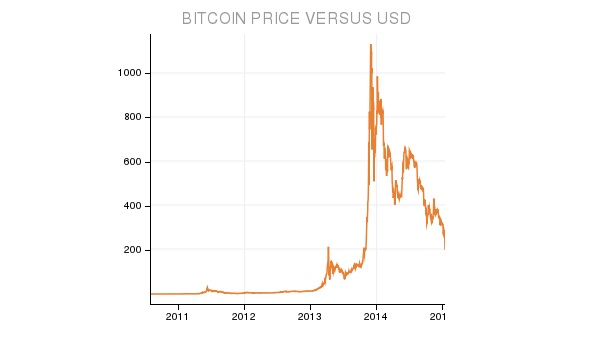 Let’s all admit that the bitcoin price bubble has popped. But what we can expect as price searches for a bottom?

For now, we can expect volatility to hold up since the bottom isn’t locked in yet.  Right now, it looks like we are seeing bottom fishing happening. This is when people are looking for a bottom without being presented of any evidence of such.  It’s a sort of front-running for a bottom in anticipation of prices going higher at some point.

Once again, bottoming is a process and takes time. History shows that as a bottom forms, volatility dies off as buying and investment interests wane.  Traders also move away from the asset as volatility dies in search of better returns elsewhere. Fundamentals start to matter and price just doesn’t begin a massive upside move.

In fact, it remains range bound for long periods of time. Within this range, I would expect to see large moves, though the price should not to go back to its highs for quite a long time. During this time, companies will continue building on the protocol with the price becoming ancillary as innovation moves forward, which in turn could lead to surges in price as well as many macro economic factors down the road.

In an interconnected global world, things change rapidly and the price is no different. This is a model based on past bubbles and could be different with bitcoin for a variety of reasons, but generally the pattern fits and I would expect a range bound price and a period of low volatility for a while once the bottom is established.

Below is a chart that shows the stages of a bubble bursting and the aftermath: