Bitcoin is on the brink of breaking a seven-month downtrend, and the president of the ECB is pushing for a central bank digital currency.

Bitcoin on the verge of breaking seven-month downtrend

It’s been another tumultuous week for the world’s biggest cryptocurrency, which is on the verge of breaking out of a long-running downtrend. Although BTC rallied to $8,400 a few days ago — which is the next resistance zone, according to analysts — prices have since retreated back to the low $8,000s. It follows speculation that geopolitical instability, fuelled by the increasing tensions between the United States and Iran, may have sparked the surge. Data from Google Trends showed that the search term “Bitcoin Iran” surged 4,450% in the seven days leading up to Jan. 8. Also this week, Fundstrat Global Advisors suggested that BTC has the potential to deliver 100% returns to investors in 2020 — and prices may rise significantly in the five months before the halving in May.

The president of the European Central Bank, Christine Lagarde, has said she supports the institution’s efforts to develop a central bank digital currency that would facilitate faster and cheaper cross-border payments. She revealed that the ECB is continuing to “assess the costs and benefits” of such an asset, as it would enable the public to continue using central bank money even when old-fashioned coins and banknotes decline. Adding a note of caution, an ECB spokesperson told Cointelegraph that “it will take a while” before its in-depth analysis on a CBDC is complete. Nations around the world are racing to launch their own digital currencies — and this week, the People’s Bank of China said work on its digital yuan is “progressing smoothly.”

A request by the U.S. Securities and Exchange Commission for Telegram to reveal its bank records has been rejected by a judge in New York. Telegram’s lawyers will undoubtedly be breathing a sigh of relief that the application has been thrown out. The SEC has been trying to find out how Telegram spent the $1.7 billion raised during its initial coin offering in 2018, but the company said the regulator’s request amounted to an “unfounded fishing expedition.” It isn’t all smooth sailing for Telegram, however, as it will still have to prove that its bank records comply with foreign data privacy laws. The messaging platform said that this review will take up to seven weeks to prepare.

The former CEO of the defunct BTC exchange Mt. Gox has kickstarted efforts to put an end to litigation that was filed by a former user of the exchange back in 2014. Mark Karpeles argues that he is entitled to summary judgment because Gregory Greene, the main plaintiff, has admitted that his initial claims were either untrue or unsupported. The defendant’s lawyers wrote: “The time has come to end this litigation in its entirety.” Greene’s lawsuit accuses Karpeles of criminal conversion and fraud, and alleges that Mt. Gox’s bank continued to accept deposits even while customers were having difficulty withdrawing their funds. Mt. Gox famously collapsed in 2014 when around 800,000 BTC — at least 700,000 of which belonged to customers — was stolen. 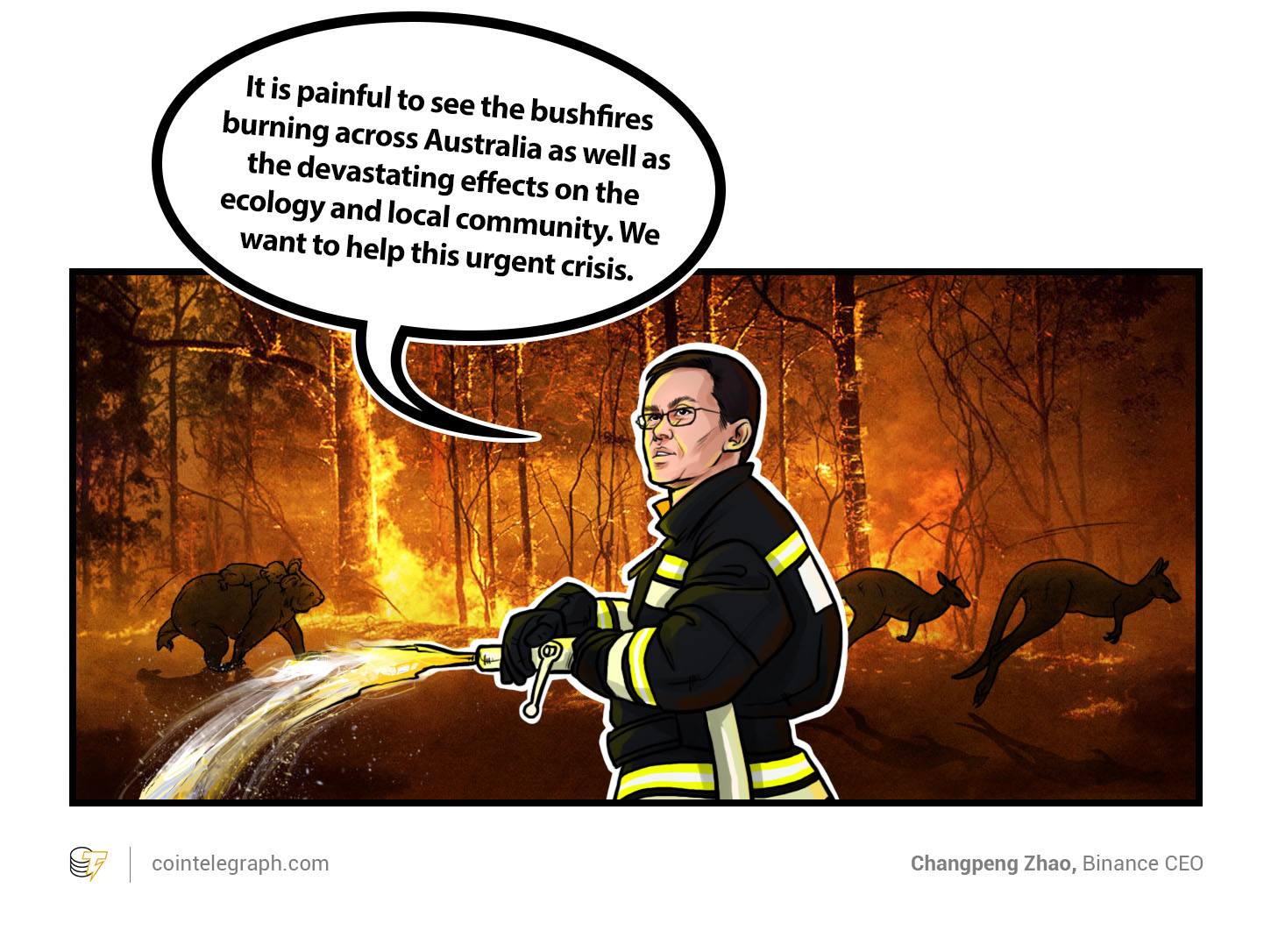 The Binance Charity Foundation is donating $1 million worth of BNB tokens to the Australia Bushfire Donations project. The pledge from the philanthropic arm of the major cryptocurrency exchange comes as the country struggles to cope with devastating fires that have killed dozens of people, destroyed thousands of homes and scorched large swathes of land. Binance CEO Changpeng Zhao has called on the whole crypto community to offer its support as the fires continue to rage. 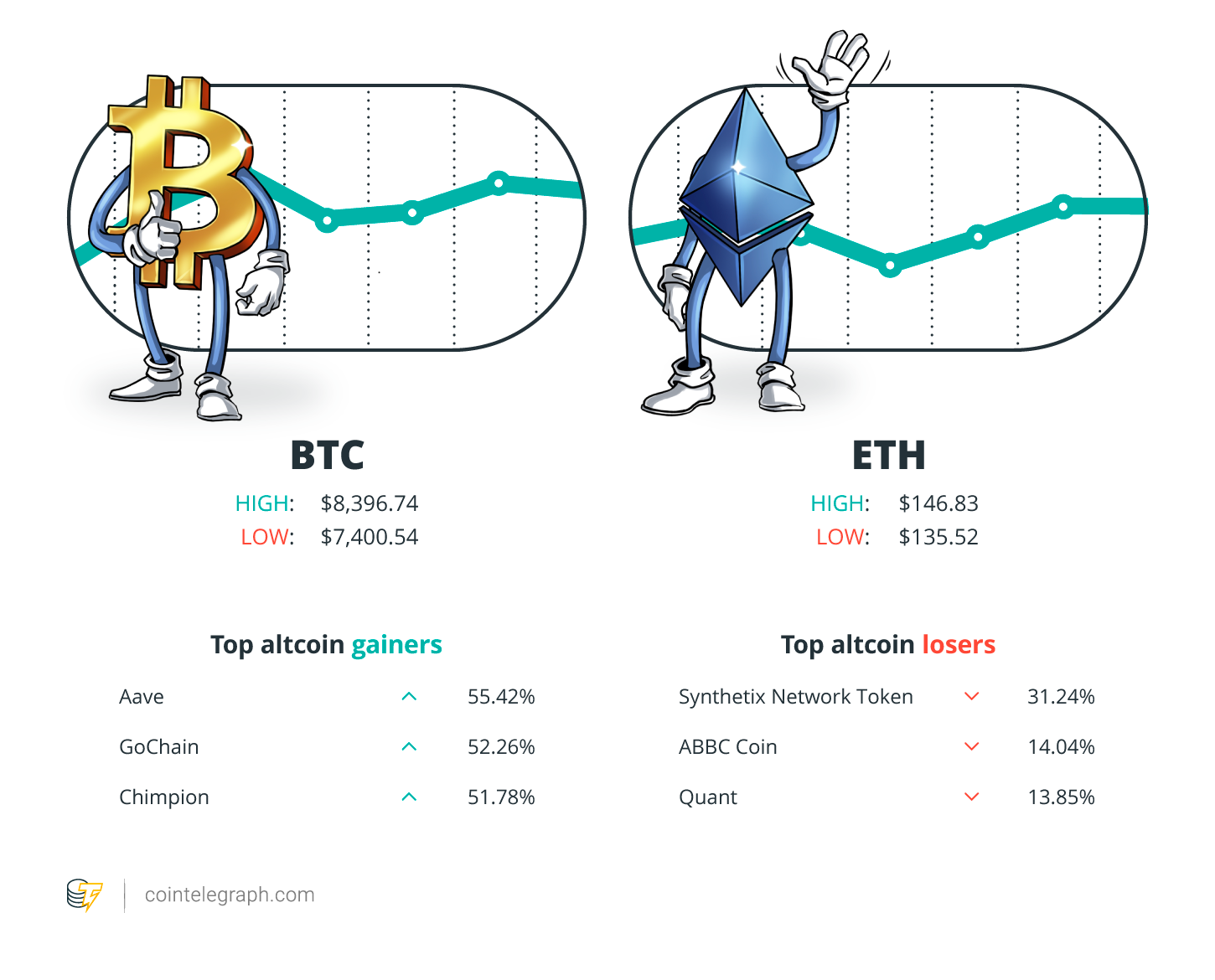 “We are working on all aspects of CBDC, with in-depth analysis of costs and benefits of such a new form of central bank money.”

“Something unforeseen that could happen could really move it [Bitcoin] faster.”

“It is painful to see the bushfires burning across Australia as well as the devastating effects on the ecology and local community. We want to help this urgent crisis.”

Sonny Singh, the chief commercial officer at BitPay, says Bitcoin will reach its highest price ever this year… with “unforeseen” events attracting new buyers. He told Bloomberg that the reasons for the rise will only become clear once a bullish surge kicks in. Singh pointed to how BTC enjoyed gains when Greece was grappling with its sovereign debt crisis in 2015, and the boost for crypto awareness that came when Facebook announced plans for its Libra stablecoin last year. His prediction is one of the more optimistic out there. While Galaxy Digital’s Mike Novogratz believes $12,000 will be achievable in 2020, veteran trader Peter Brandt thinks BTC could tumble to $5,500 in the summer.

A British financial expert has warned the public to be aware of BTC scam adverts featuring his face on Instagram. In the ad, Martin Lewis appears to be endorsing a “revolutionary Bitcoin home-based opportunity” — and it links to a rip-off version of a major news website. This comes months after Lewis successfully settled a defamation lawsuit against Facebook, the owner of Instagram, for showing similar ads. Although Facebook and Instagram had banned crypto ads at the start of 2018, it eased this policy in May 2019 — prompting dozens of fake Libra pages to flood both sites. 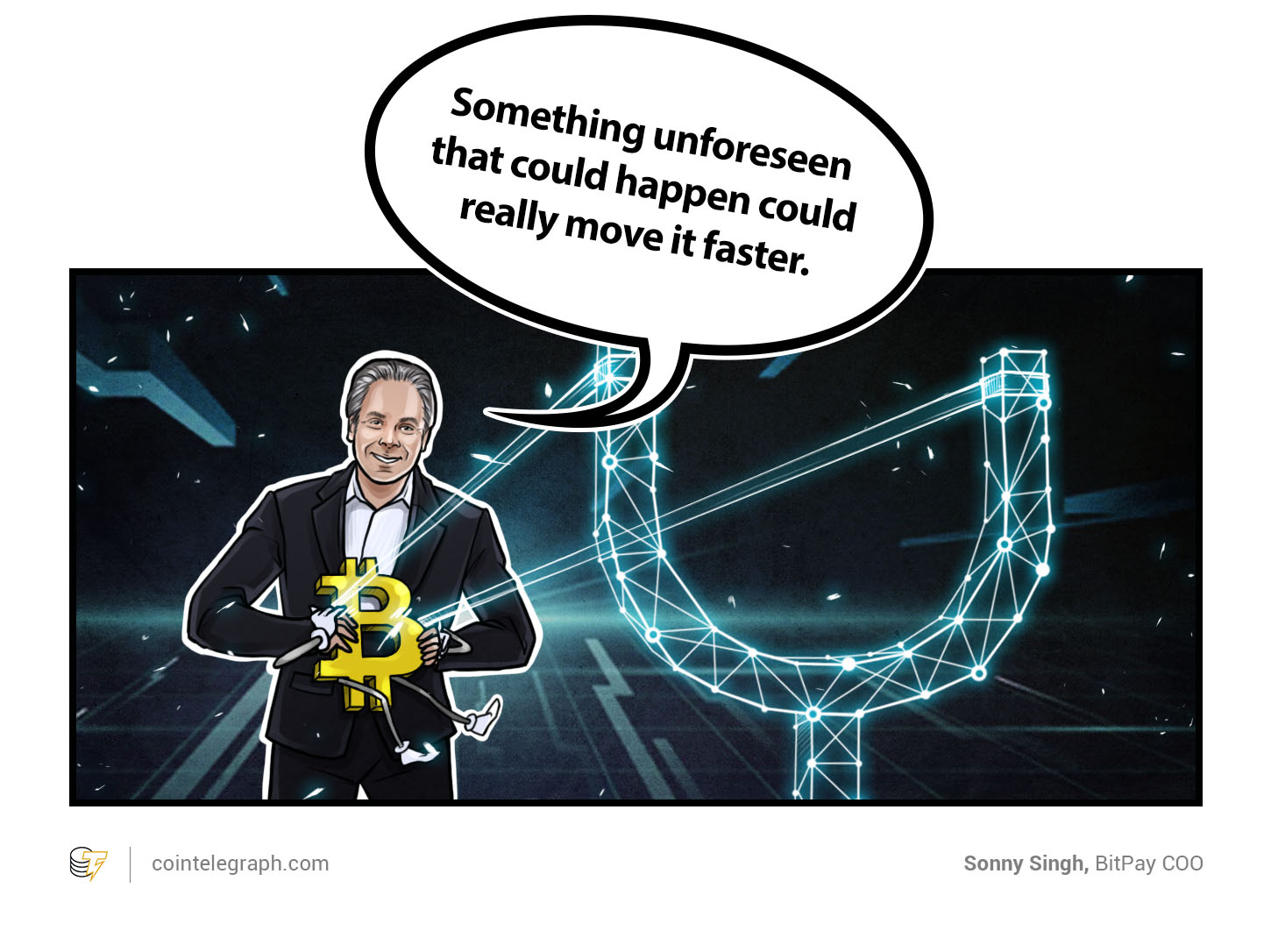 Red-faced officials at the U.S. Commodity Futures Trading Commission have said they cannot locate a man who is allegedly responsible for a crypto Ponzi scheme worth more than $140 million. Benjamin Reynolds is accused of defrauding over 1,000 investors to the tune of 22,858 BTC. The CFTC tried to serve Reynolds at the “service address” of the company that managed the scheme, but it emerged that the address didn’t actually exist. Attempts to contact him over email have also been unsuccessful.

Two directors of an alleged crypto pyramid scheme in Uganda have appeared in court to face 65 counts tied to obtaining money by false promise. Prosecutors have logged more than 4,000 complaints against Dunamiscoins, a suspected fraud that collapsed in December 2019 after almost two years in operation. It is believed that dozens of victims lost up to $38,000 investing in the scheme, which promised to deliver extraordinary returns. Earlier reports had indicated up to 10,000 people may have been affected, with total losses of more than $2.7 million. Samson Lwanga and Mary Nabunya have pleaded not guilty to the charges. 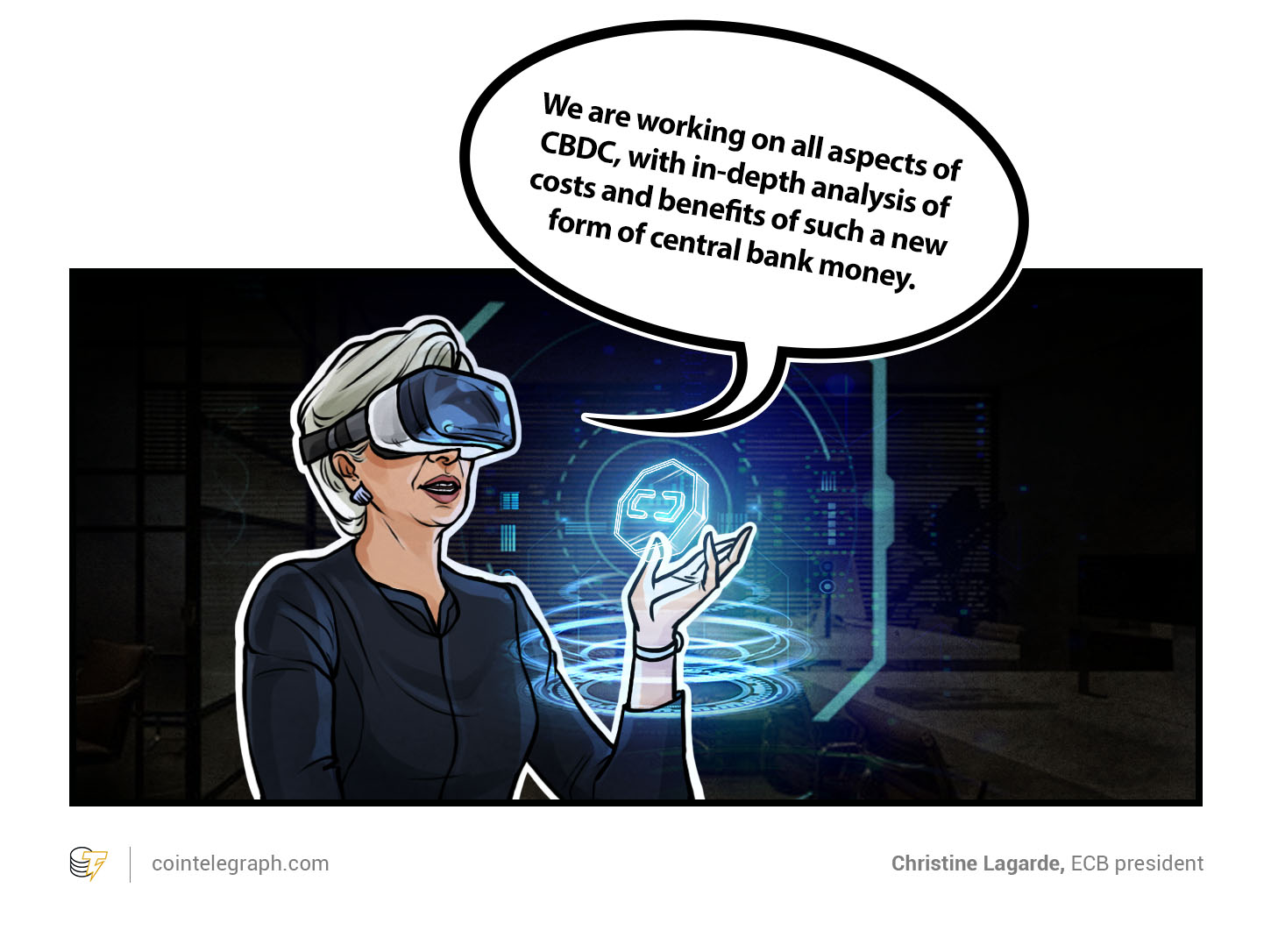 Bitcoin is becoming more valuable to Iranians amid tensions with the U.S.

Shiraz Jagati takes an in-depth look at BTC’s movements following the death of Iranian commander Qassem Soleimani, and asks whether Iranians really believe in the power of Bitcoin.

Blockchain and crypto: Will security issues finally be dealt with in 2020?

As crypto has gained popularity over the past few years, more and more security breaches have emerged. Alex Kech explores whether 2020 will see greater collaboration to prevent such incidents, or enable stolen funds to be recovered.

What happens if the U.S. loses the blockchain war?

China is seizing an opportunity to stand up to the United States and flex its muscles. But what will happen if Beijing wins the blockchain race? Paul McNeil has a look.