Bitcoin Is Becoming More Valuable to Iranians Amid Tensions With US

As tensions between Iran and the U.S. continue to escalate, more and more Iranians seem to be turning toward crypto and BTC.

Earlier this week, the world’s flagship crypto asset saw its value surge from around the $8,000 mark to just over $8,430 within an hour’s time. This latest price action came after the Iranian government decided to launch a missile attack on an Iraqi military base housing American troops.

However, it bears mentioning that Iran’s actions were prompted by United States President Donald Trump’s decision to eliminate Iranian general Qassem Soleimani — a controversial figure in the West but loved by the masses in his home country.

The overall value of Bitcoin (BTC) is now up by around 15% this year, but since President Trump recently downplayed the situation in Iran at a White House press conference — saying that the Middle Eastern power is ready to stand down — the currency’s price slid back down to under the $8,000 mark.

With that being said, a whole host of prominent figures, including Galaxy Digital’s Mike Novogratz and Digital Asset Capital Management’s Joshua Green, seem to agree with the notion that the aforementioned rally was definitely linked with the events that recently unfolded in Iraq.

Also worth exploring is the fact that Bitcoin’s price increase has followed an increase in the value of other safe-haven assets such as gold and oil. To put things into perspective, the yellow precious metal is trading close to its highest levels since March 2013. Meanwhile, the price of Brent Crude is up by 2.5% to around $70 per barrel — which could possibly be in relation to concerns over the global oil distribution being disruption because of the U.S. and Iran’s escalating military tensions.

Providing his thoughts on the matter, Mati Greenspan, the founder of QuantumEconomics.io, was quoted as saying, "The resemblance between digital gold and the physical stuff is uncanny. They've basically been moving in a very similar pattern throughout most of last year."

Do Iranians really believe in the power of Bitcoin?

With all of the news stories recently floating on the internet that claim people in Iran are scurrying to get their hands on Bitcoin, especially in the wake of the recent geopolitical tensions that have been rising in the region, Cointelegraph reached out to Hadi Nemati, an Iranian digital currency specialist and chief operating officer of Bitfolio Capital — an open-end crypto hedge fund. He pointed out the following:

“After the summer of 2019, many Iranians came to know about Bitcoin because of all the mining news and the use of electricity associated with the same which was vastly covered by various state media outlets and newspapers. Bitcoin, on a mass scale, is being seen as a speculative alternative asset and digital money.”

When asked about which section of people among the local masses are actively making use of Bitcoin the most, Nemati pointed out that a threefold categorization can be made:

In regard to why the popularity of BTC has surged so dramatically in Iran over the past 24 months, Cointelegraph reached out to Mahyar, a Tehran-based crypto miner and investor. He pointed out that since many Iranians do not possess international accounts, they are able to use Bitcoin as a means of receiving cross-border payments in a seamless, hassle-free manner. On the subject, Mahyar added:

“People send bits to a currency exchange and receive cash. Most bits also come from farms, and the dollar revenue is very important to people. I think big companies are doing their best to avoid taxation as well.”

Another reason he believes Bitcoin’s popularity has increased so much in recent years is because of the anonymity benefits that most cryptocurrencies bring to the table. Not only that: Owing to the fact that BTC can be used by anyone irrespective of their financial background, more and more people are willing to make use of this novel asset class.

On the subject of whether there currently exist any easy conversion avenues for people to liquidate their BTC holdings, Mahyar told Cointelegraph that there are a lot of folks who are willing to facilitate peer-to-peer exchanges because they believe BTC is destined for big things in the near future. Additionally, he also highlighted that more traditional routes, such as LocalBitcoins, are quite popular among the masses.

Iran’s relationship with crypto seems to be constantly evolving

Since being faced with severe economic sanctions by the U.S. government back in 1979, the value of the Iranian rial has been on a steady decline — with the downturn becoming especially blatant during the 2000s.

As a result of this, many Iranians have tried to look for novel ways in which to transfer their wealth to different stores of value, including other fiat currencies, precious metals, etc.

Related: Five Countries Where Crypto Regulation Changed the Most in 2019

Additionally, many wealthy Iranians have taken refuge in banks based across Dubai and other friendly Middle Eastern countries. However, with inflation constantly on the rise, the rial has been facing a lot of devaluation, especially after President Trump reinstated certain economic sanctions against the Islamic nation last year. 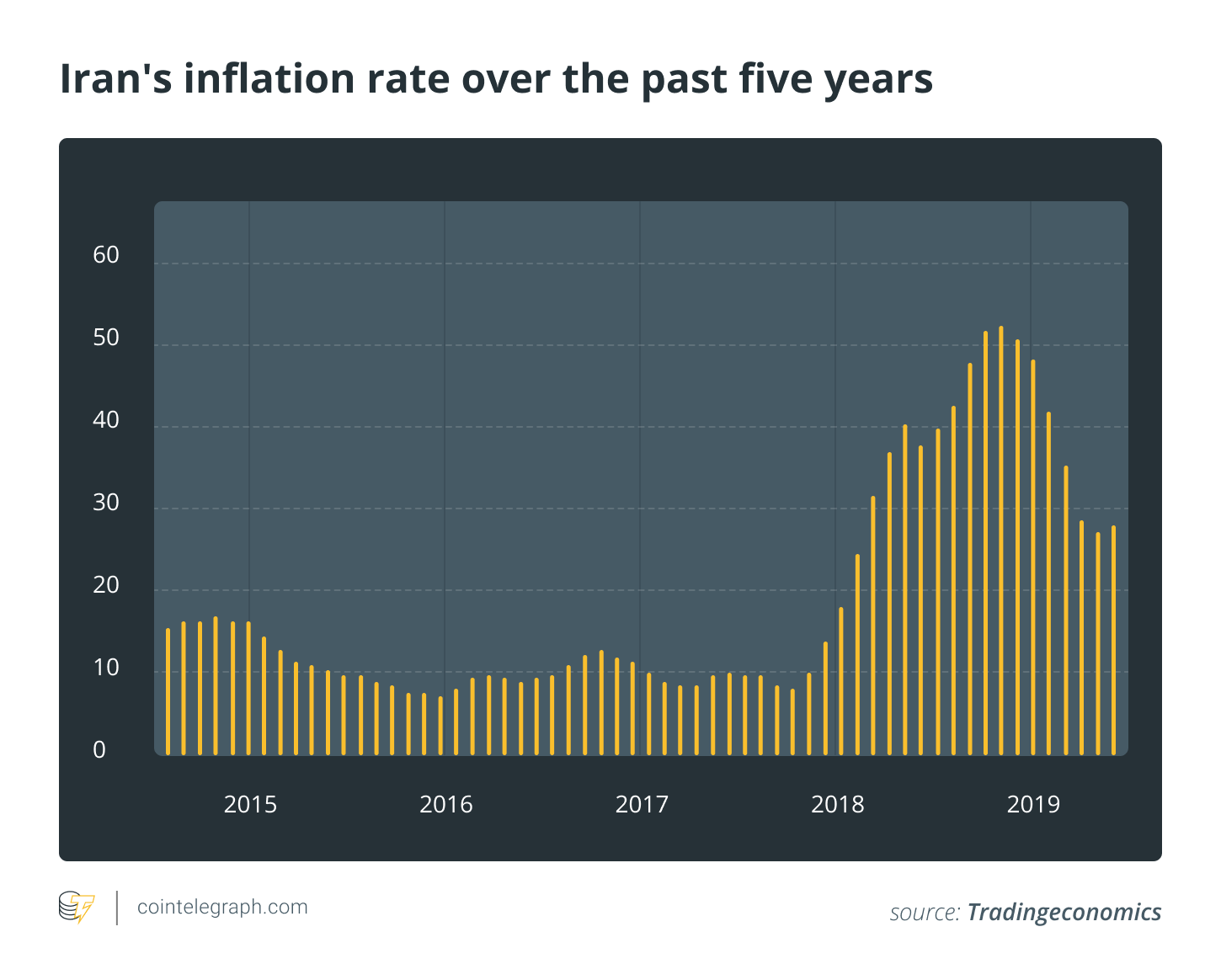 To further elaborate on this topic, Cointelegraph spoke with Jeremy Joo, the CEO of Unicoindcx and member of the Malaysian blockchain conglomerate G1. Joo frequently deals with crypto firms and startups based in and around Iran, and in his personal view, many locals who up until now did not have the means nor the volume to move their money out of the country have started to turn toward Bitcoin at a rapid pace — especially the younger generation. He added:

“The younger population started small mining operations. Electricity costs are next to nothing in Iran and in 2017, the customs were not familiar with mining machines thus many came into the country — especially S9s and other equivalents. As of late 2018, the government is finally aware of these mining machines, which has resulted in their prices going up. However, this has not deterred the masses.”

Joo also aligned with Mahyar’s stance that a number of Iranian miners and crypto holders are currently making use of LocalBitcoins as well as a host of local over-the-counter groups — that have strong overseas connections — to facilitate their crypto transactions in an off-exchange fashion.

Joo also pointed out that while there exist small pockets of crypto traders in the country, Iranians are not known for their financial market knowledge, but rather their engineering skills — which is highlighted by the fact that most of these traders are also involved in some sort of Ether- or Bitcoin-based mining activity. Joo added:

“Iranians use crypto as a store of value — very much like in Venezuela, where their currency has been rapidly devalued. Also, no merchants accept Bitcoin openly as payments in Iran and e-wallets are nonexistent.”

Political views aside, the sad reality of Iran is that since the revolution of 1979, the country has been faced with a myriad of economic sanctions as well as other destabilizing issues, such as constant currency devaluation and high inflation.

People living in countries like Iran, who face constant economic and social turmoil, are bound to turn toward cryptocurrencies at some point or another in order to safeguard their assets — especially since digital currencies cannot be controlled or manipulated by governments or any other centralized financial/banking institution.

In this regard, younger folks — especially those with international exposure — seem to be hopping onto the crypto bandwagon at an extremely fast rate, simply because crypto seems to be a better option when compared to the nation’s sovereign currency.