Most of the top 20 cryptocurrencies are reporting slight to noteworthy gains as Bitcoin breaks the $3,450 mark.

Friday, Feb. 8 — most of the top 20 cryptocurrencies are reporting slight to noteworthy gains on the day by press time, with Bitcoin (BTC) breaking the $3,450 mark again, according to Coin360 data. 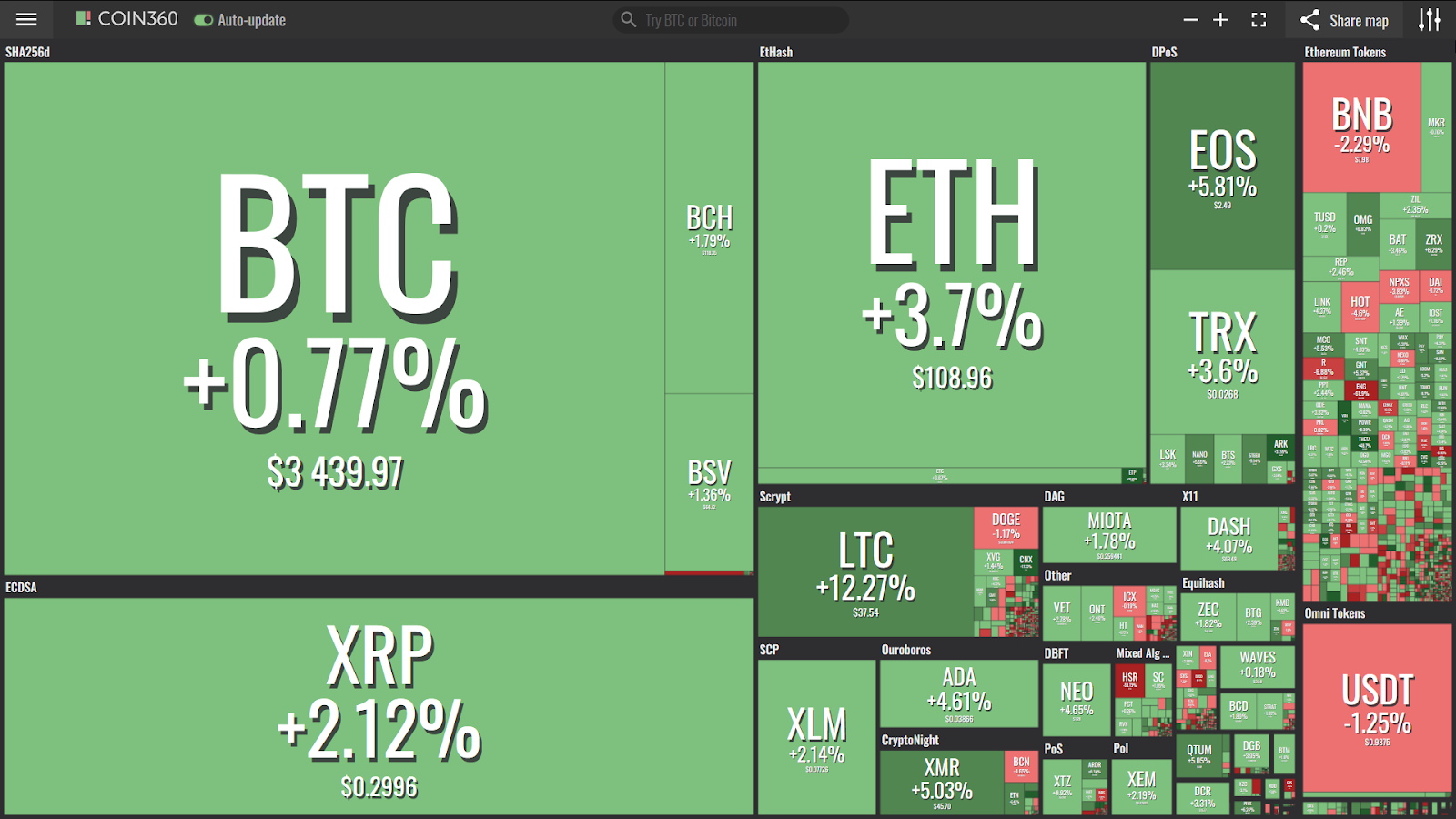 At press time, Bitcoin is up three-quarters of a percent on the day, trading at around $3,462, according to CoinMarketCap. Looking at its weekly chart, the current price is just over half of a percent lower than $3,484, the price at which Bitcoin started the week.

Top altcoin Ripple (XRP) gained over 2 percent in value in the 24 hours to press time and is currently trading at around $0.299. On its weekly chart, the current price is over 3 percent lower than $0.308, the price at which XRP started the week.

Ethereum (ETH), the second-largest altcoin by market cap, has seen its value increase by nearly four percent over the last 24 hours. At press time, ETH is trading around $109, after having started the day at $105. On the weekly chart, Ethereum’s current value is higher than $107, the coin’s price one week ago. Moreover, the current price is also nearly a percent lower than $110, the mid-week high reported on Feb. 3.

Among the top 20 cryptocurrencies, Litecoin (LTC) is experiencing the most notable growth, up nearly 17 percent. Litecoin has today taken EOS’s (EOS) place as the fourth cryptocurrency by market cap.

This major movement could be attributed to the recently announced partnership between Litecoin and Beam to implement Mimblewimble via Extension Blocks on Litecoin.

As Cointelegraph recently reported, Litecoin creater Charlie Lee has declared that he will focus on making the major cryptocurrency more fungible and private. The Mimblewimble protocol, according to the aforementioned announcement, is “designed to improve privacy and scalability.”

The stock market is seeing a minor downturn, with the S&P 500 down 0.69 percent today and Nasdaq down 0.7 percent. The CBOE Volatility Index (VIX), on the other hand, has gained 6.72 percent of its value on the day at press time.

Major oil futures and indexes are seeing mixed market movements, with WTI Crude down 0.15 percent and Brent Crude up 0.37 percent. Mars US, on the other hand, is down 1.12 percent, Opec Basket up 0.37 percent and the Canadian Crude Index down 0.36 percent, according to oilprice.com.

Today news broke that, according to a leaked interview with a commissioner, a Bitcoin exchange-traded fund (ETF) will most likely ultimately gain approval from the United States securities regulator.