Bitcoin bulls are back in control and investors are euphoric, but is it too early to celebrate?

Bitcoin price (BTC) is holding around $9,445 after some impressive growth over the last few weeks. But is this the penultimate Bitcoin bull market that has been anticipated since the bear market ripped through traders’ emotions in 2018 and 2019, or is this another false rally that will leave hodlers disappointed and confused?

Let’s take a look at the charts to find out! 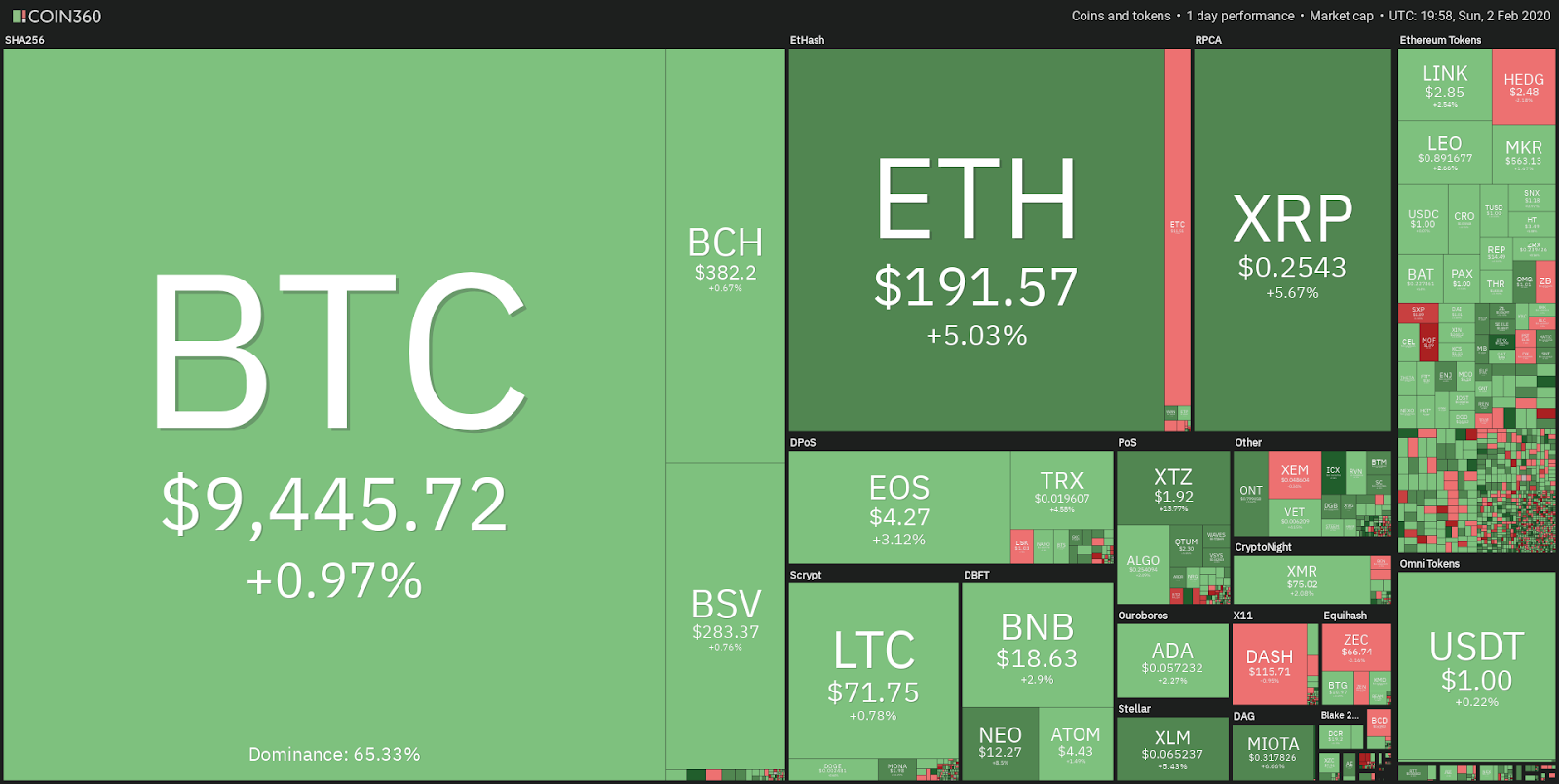 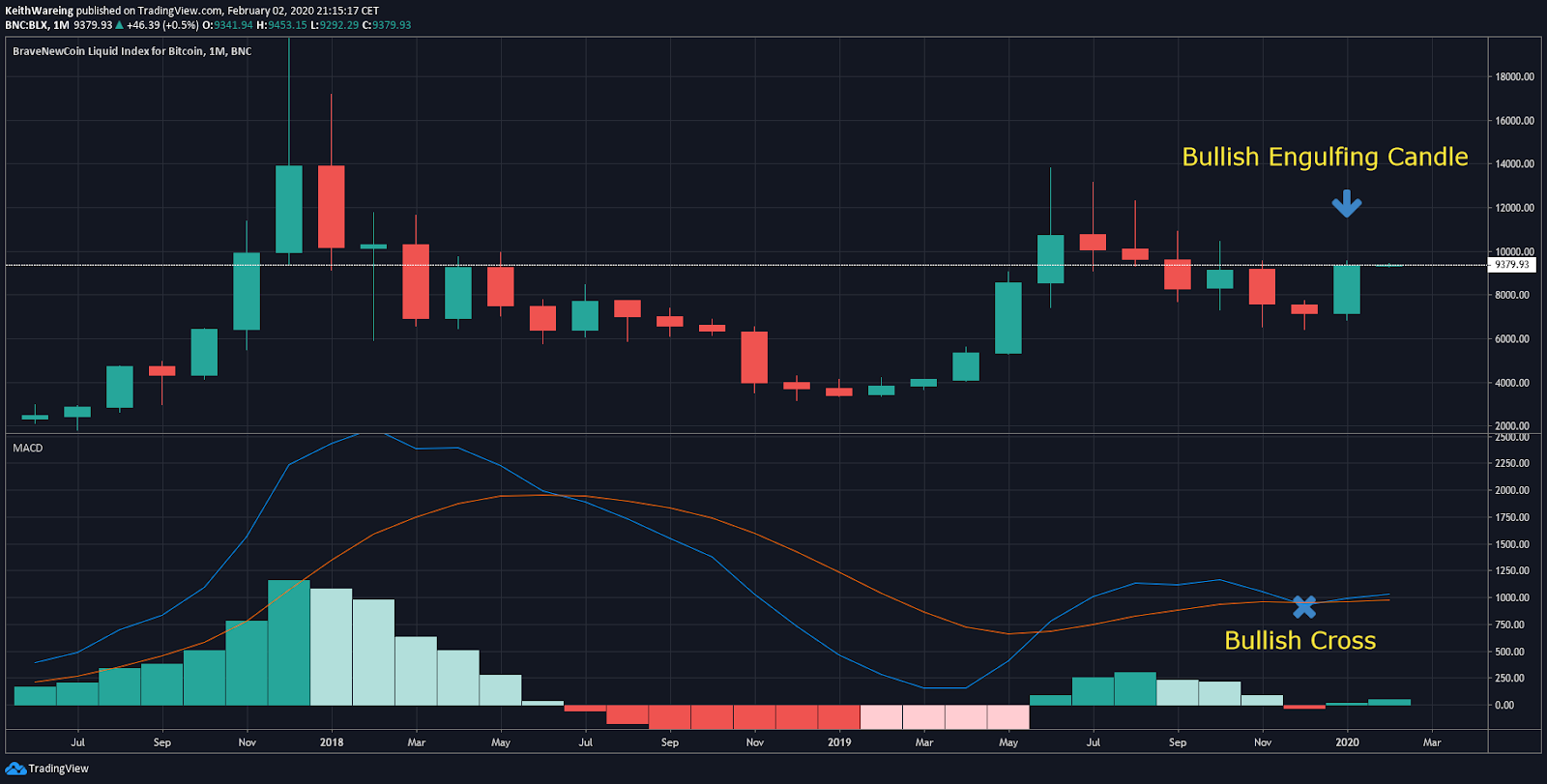 In my Jan. 12 analysis I wrote that my greatest concern was the bearish nature of the monthly chart. At the time the moving average divergence convergence (MACD) indicator was sitting on its first red candle of the MACD histogram, however, all other major time frames such as the weekly and daily were looking bullish.

Despite these concerns, I made a case that a new bull market could be ushered in, should the price hold above $8,500 over a period of around 2-3 weeks, as this would inherently change the dynamic of the charts.

Now that three weeks have passed investors are likely more exciting than disappointed. The new month started yesterday and with it came a bullish engulfing candle that has completely transformed the Bitcoin charts from somewhat bullish with some bearish possibilities to incredibly bullish. This occurrence was also followed by a noticeable shift in sentiment across social media.

So is this the bull run we’ve all been waiting for or is something less exciting responsible for the recent moves? 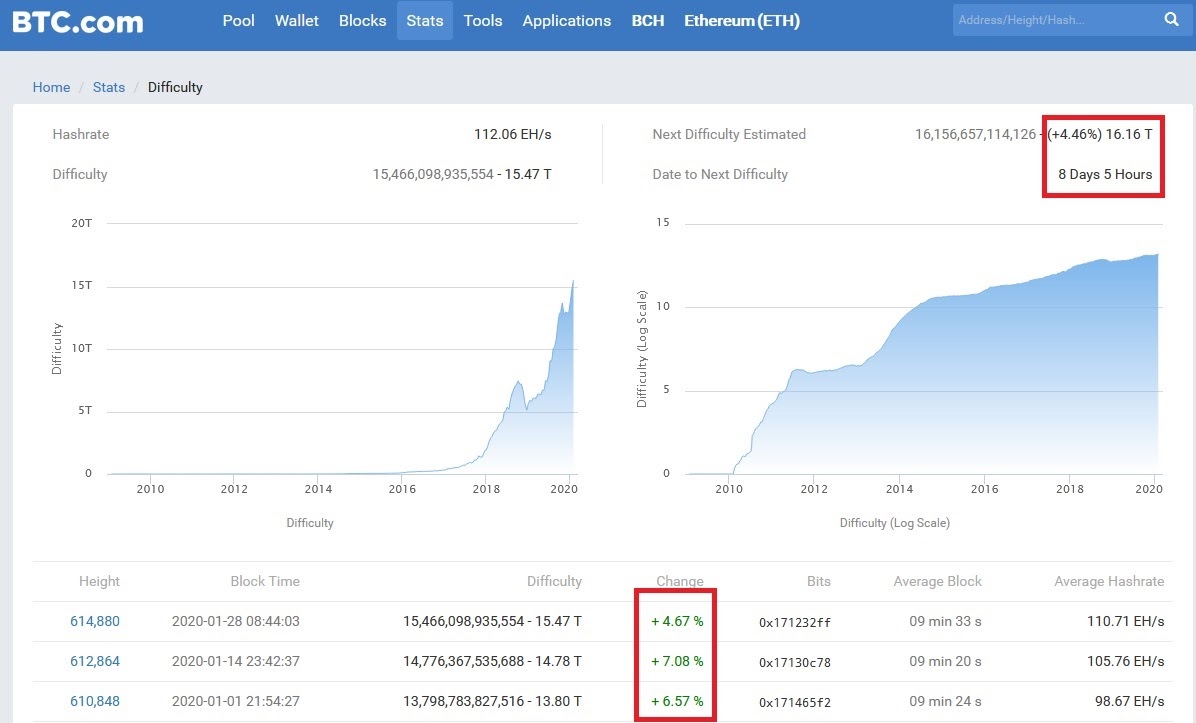 On Jan. 1 Bitcoin price was approximately $7,200, and there was an increase in mining difficulty of 6.57%. Whilst there wasn’t an immediate change, 5 days later the Bitcoin price increased by around 7% before stabilizing for 9 days, which is when we saw the 8.5% move on Jan 14.

This brings us to Jan. 28 with a modest difficulty increase of 4.67% which saw the price leap from $8,900 to $9,350, which is once again, around the same percentage increase as the mining difficulty.

Currently, there is little over a week until the next 4.46% difficulty increase, so does this mean that Bitcoin will jump another 5% bringing us ever closer to that elusive $10,000 barrier this time next week? If so, could this metric be giving us a taste of what’s to come with the upcoming halving? 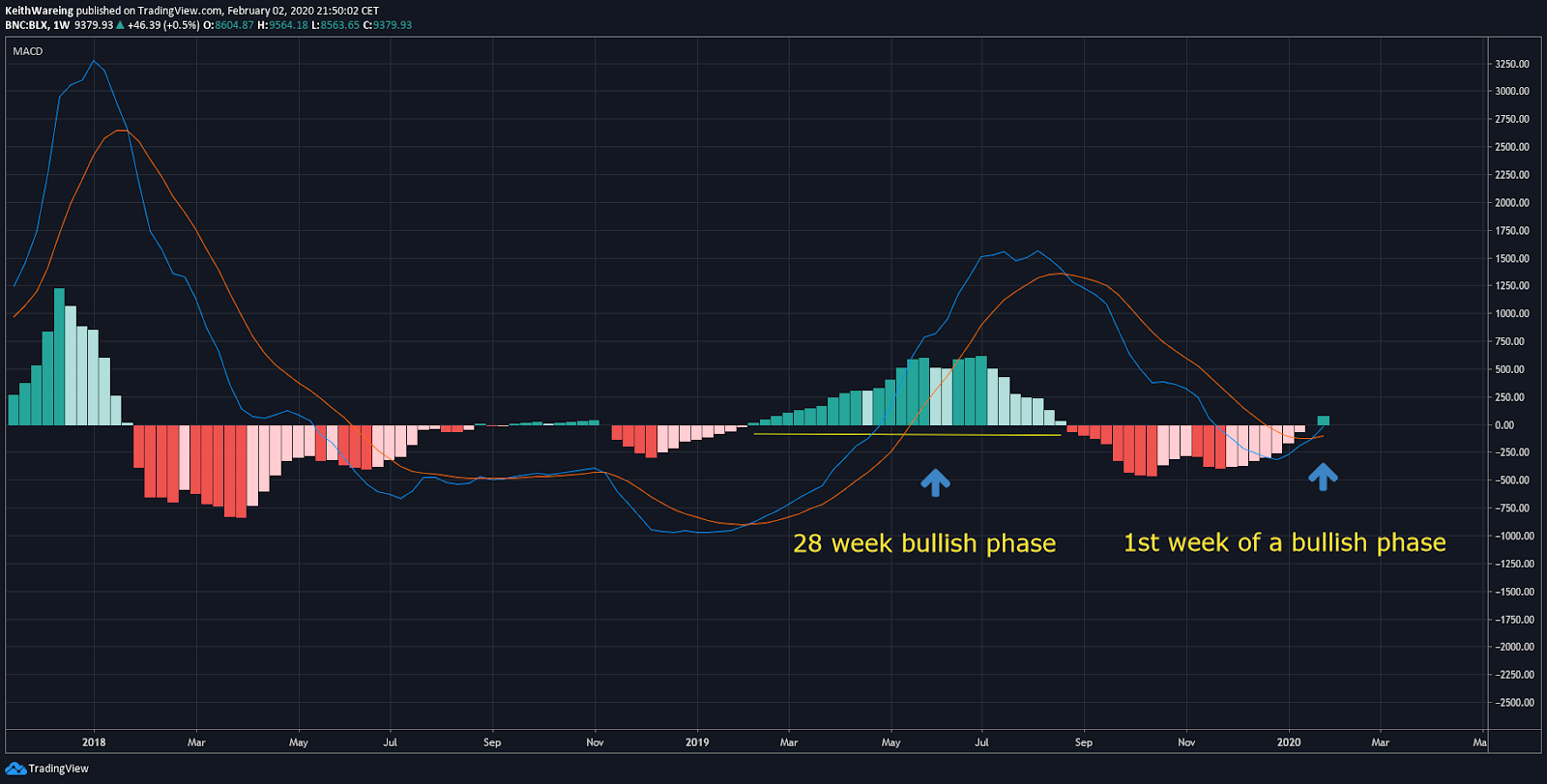 The weekly moving average divergence convergence (MACD) indicator, has always proved an accurate buy/sell indicator for Bitcoin. The last bullish phase started on Feb. 11, 2019, when the price was just $3,695.

One cannot help but be excited at the prospect of what is ahead of us, as the halving is only 14 weeks away. This is only half of the last bullish phase on the MACD so where could the price realistically go? 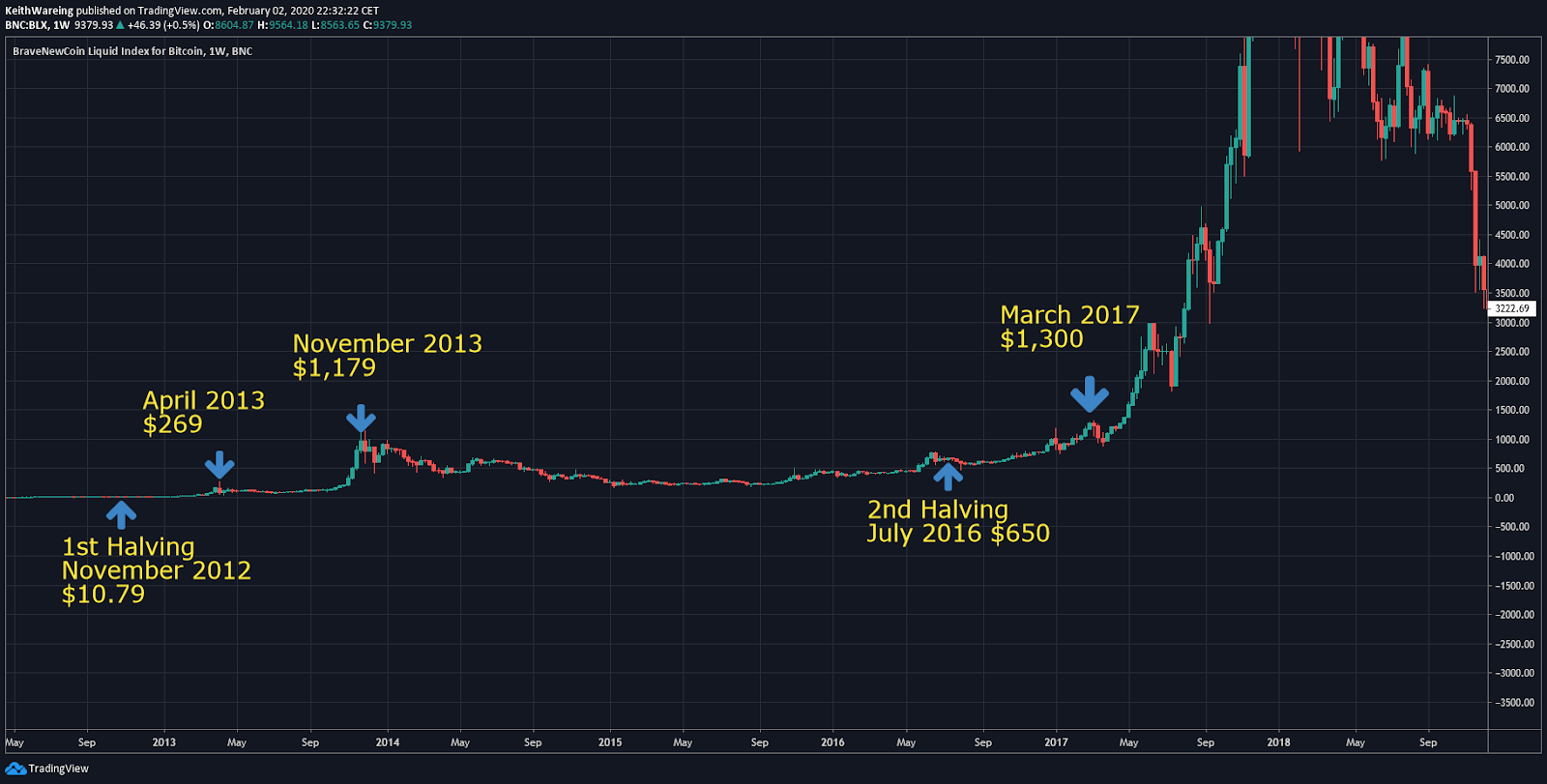 At the moment there’s a lot of misinformation being thrown around. Yesterday Cointelegraph reported that some crypto YouTubers are forecasting that Bitcoin price will rise to $100,000 in 2020.

As a crypto YouTuber myself, I find this sort of prediction embarrassing and unsubstantiated, as historically the price of Bitcoin doesn’t start to take off until between 6 months to a year after the actual halving date.

In November 2012 when the first reward halving happened, Bitcoin was trading at around $10, and the price didn’t start to gain traction until March 2013 when the price climbed to $30.

However, this wasn’t the first time Bitcoin hit $30. Bitcoin had actually between in a 2-year bear market in the run-up and beyond the halving date as the price was $31 in June 2011.

After Bitcoin reached $30 again the price did admittedly go parabolic. In April 2013 Bitcoin price reached a high of $269 before falling back to around the $130 zone until the end of October 2013 and this is the point where the price dramatically took off and reached a price of $1,176 by November 2013. However, this was 12 months after the halving date.

The last halving date was July 2016 and again the numbers aren’t that exciting. At the point of the halving itself, the price was around $650, around 45% lower than the all-time high. The price gained around 10% by December 2016 but didn’t exceed the previous all-time high until March 2017, 10 months after the actual halving date.

So with that in mind, how likely is it that Bitcoin could even reach the previous all-time high of $20,000 in 2020, let alone a figure 5 times that?  As such, it is more reasonable to expect steady growth through 2020, and possibly a parabolic move in 2021 rather. With that being said, traders need to take this market one week at a time. 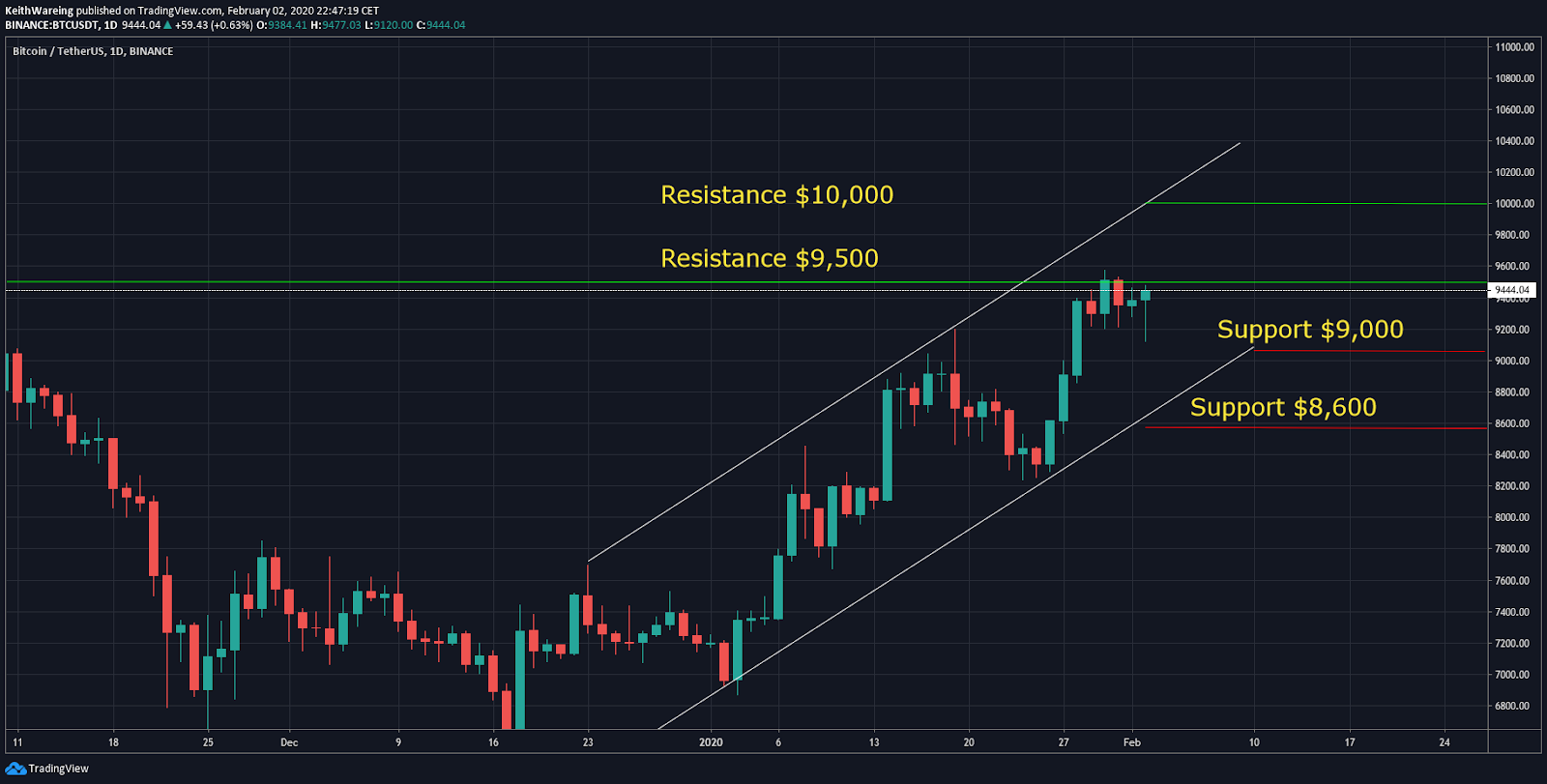 There’s some heavy overhead resistance around $9,500 and this figure seems to span back as both key support and resistance over the last 9 months. With the increase in mining difficulty in a week’s time, I expect Bitcoin will break past this pivotal point before encountering its last level of resistance at around $10,000.

Should Bitcoin breakout of this channel, I’d be looking for a meaningful move beyond $10,400 before getting too excited.

Everything looks bullish this week so should traders be worried?

At the moment, support can be found around $9,150 and $9,000 but it is worth noting that Bitcoin has had a strong bullish run over the last few weeks, therefore a pullback is to be expected at some point.

If the price were to break down below $8,600 this would be a worrying development.