Bitcoin Holding $8K as Support but What Will it Take to Break $10K?

Bulls look to regroup from a position of strength and aim to take Bitcoin price to new highs in 2020 by turning the $8,000 level into support.

Bitcoin price (BTC) closed the week at $8,180 representing an 11% gain for the week after struggling to break the resistance at $7,600 for most of November and December. The price is down around 1% on Monday but the bulls have retained the $8K handle.

Total market cap excluding Bitcoin was up 12.5% last week meaning that altcoins are starting to gain some market share from Bitcoin, which is impressive given BTC’s impressive week and counter to the general downtrend that has been in place since summer. 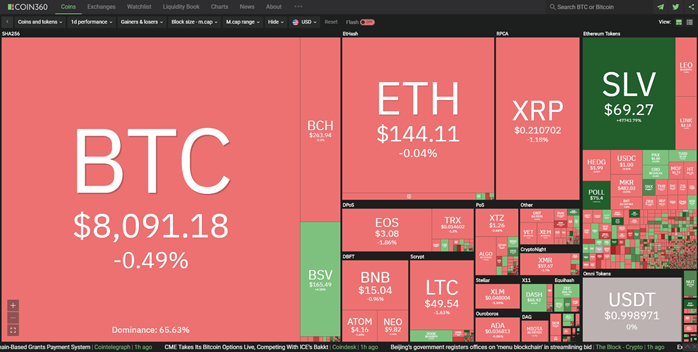 After an impressive week of gains, Bitcoin is now trading above the 50,100 and 200 weekly moving averages while staying above $8,000 on Monday, which is one of the larger areas of volume from 2019.

The bulls started the week on a positive note having broken the 7-week resistance of $7,600 and retaining the $8K level early through the week. Maintaining above $8,000 and printing higher lows will be an important task to demonstrate that the bulls have the strength to reclaim the higher trading range between $7.5K and $9.5K.

The weekly Bollinger Bands show Bitcoin hard up against the 20-week moving average. Losing this level in September was definitive in confirming the downtrend in recent months and breaking it back in March 2019 defined the following uptrend.

In both of the previous two occasions, it did little to act as resistance but it did act as initial resistance last week. Clearly, this will be important to watch in the coming weeks.

The spot volume for BTC/USD has been in decline since the climactic selloff in June 2019. It is notable that the most significant weeks of volume have all been supporting a move higher. The moving average convergence divergence indicator, or MACD, has been showing divergence on its histogram since October but requires a bullish signal cross to confirm it.

Given where the MACD is, this would most likely coincide with it crossing its zero line, which would add confluence to it being bullish. Until this occurs, however, this remains an unconfirmed signal.

The daily Bitcoin chart shows that BTC has broken both the 50 and 100-day moving averages relatively quickly over the past two weeks.

The 100-day moving average is now acting as support after Bitcoin was held up around the mid-$8,000s, which is the middle of the previous trading range that Bitcoin held through October.

Bitcoin price is currently consolidating above resistance and the most significant volume node on the visible profile visible range, or VPVR. If Bitcoin can complete bullish consolidation above $8,000, a measured move to the upside would take the price of Bitcoin to the top of the previous range at $9,500 and possibly as high as the next high volume node of $10,100.

The MACD has remained crossed bullish, trending above zero so the outlook remains positive for the bulls who need to show strength turning previous weekly resistance into support.

The 4-hour chart shows that consolidation is occurring around the $8,000 level. There is a hint of a general descending diagonal resistance in price but selloffs have been met by buying interest so far resulting in a sideways action.

Should the price of Bitcoin break down at this point, it seems likely that there would be a response around the 61.8% level of the bounce last week, which would potentially lead to a higher low between $7,800-$7,900.

Failure to find support here would lead to Bitcoin painting an Inverted Adam and Eve topping pattern, which would put downward pressure on previous support, suggesting that demand may need to be retested back at $7,000.

Looking at the CME futures, the price gap created over the weekend was filled quickly on Monday. One thing to note is the volume on the futures contract was largest during the most recent bounce backtesting the mid $7,000s. Volume overall is in decline through this period of consolidation and looks likely to be reaching a pivotal point within the next 24 hours.

The premium has now settled to around $50 above the spot price, having been as high as $180 at the highs last week, meaning the market has returned to a more modest state of contango, which is a healthier outlook.

The BitMEX funding rate is also above zero, which generally has an inverse relationship with price as a leading indicator. Despite this, it is by no means near the overheated levels seen at market tops.

The picture is fairly clear for Bitcoin. Previous horizontal resistance has been broken and the bulls need to turn this now into support. There is a debate about whether Bitcoin has broken out of its diagonal resistance so this will remain a key point of contention, which many are looking towards as a sign of a definitive change in trend.

Breaking above key moving averages, supported by a local trend change in volume, paints a positive picture. But failure to capitalize on the early 2020 gains could see the bears reclaim control and take Bitcoin to new lows.