Bitcoin Price Could Rally to $9K Before a Massive Collapse, Here’s Why

Bitcoin price could experience a relief rally as high as $9K before a bear trend resumes with the beginning of the new year.

Good news in the short term, as Bitcoin could provide some interesting upward movements to finish 2019 with a bang 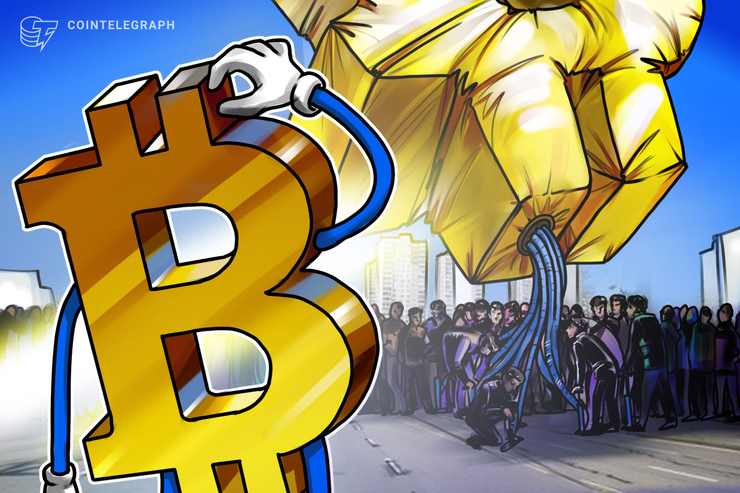 Bitcoin price (BTC) has been in a sidewards range for several weeks now, with some people on team bear calling for fresh lows in the region of $3,000 while the bulls have been calling for astronomical all-time highs soon. One thing that is apparent in the market, is that you have to take it one week at a time.

With Bitcoin currently heading towards the mid-$7,000 range, is it time to flip bullish? Or is this yet another low liquidity Sunday pump to create CME gap-filling opportunities? 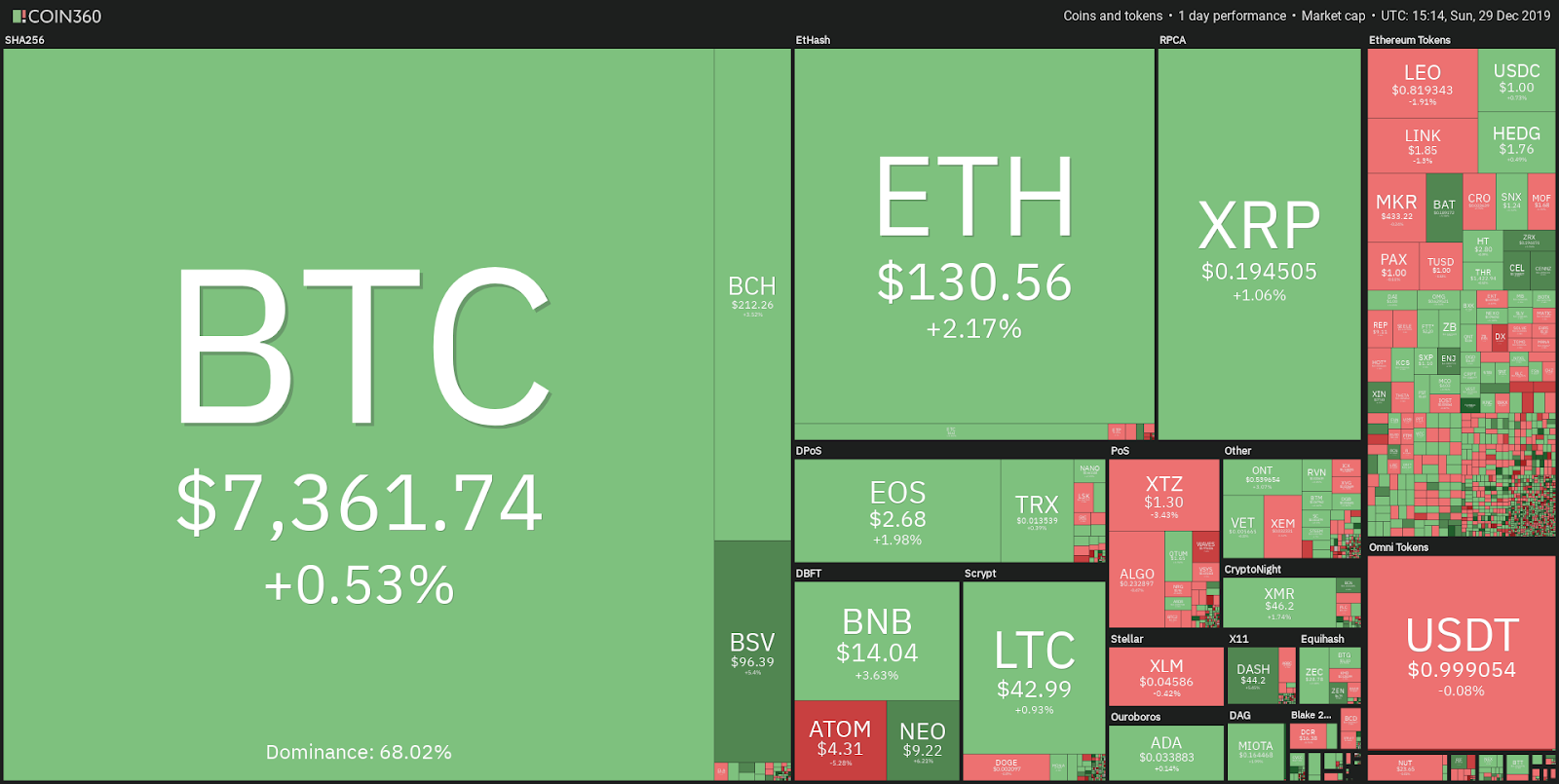 But Sir, the CME gap

Whether you are leverage trading, or simply moving your Bitcoin into a stablecoin during the dips, if you are not capitalizing on the weekly CME gap, you’re missing a trick. However, the more obvious these gap fill trades become, the more likely it is that they will soon become a thing of the past.

Next week is set to be the same, with the CME Holiday Calendar citing that trading will be closed Dec. 31 to Jan. 2, 2020. 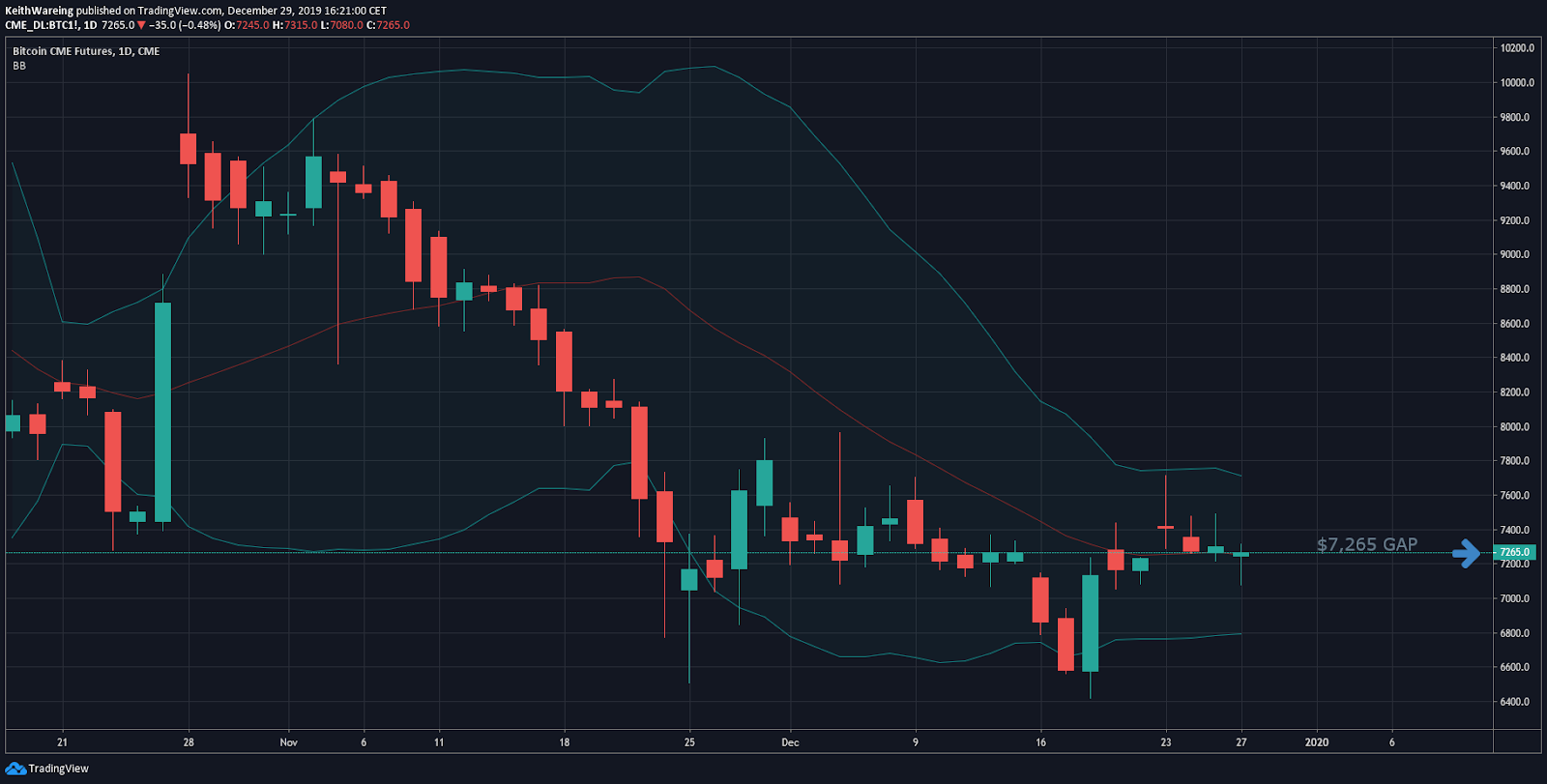 It seems that traders with greater exposure to Bitcoin are driving the price during the weekend when the volume is thinner, and then waiting on institutional traders to fill the gap the following week.

However, with institutional money taking an extra 6 days off over the holiday break, it means more thin volume periods for the price to be driven by whales in this 24/7 market.

So while the bankers may sleep, Bitcoin, in fact, does not sleep, and this could open up a window for a short-term rally before the bear cycle resumes.

The weekly MACD has started to lean bullish 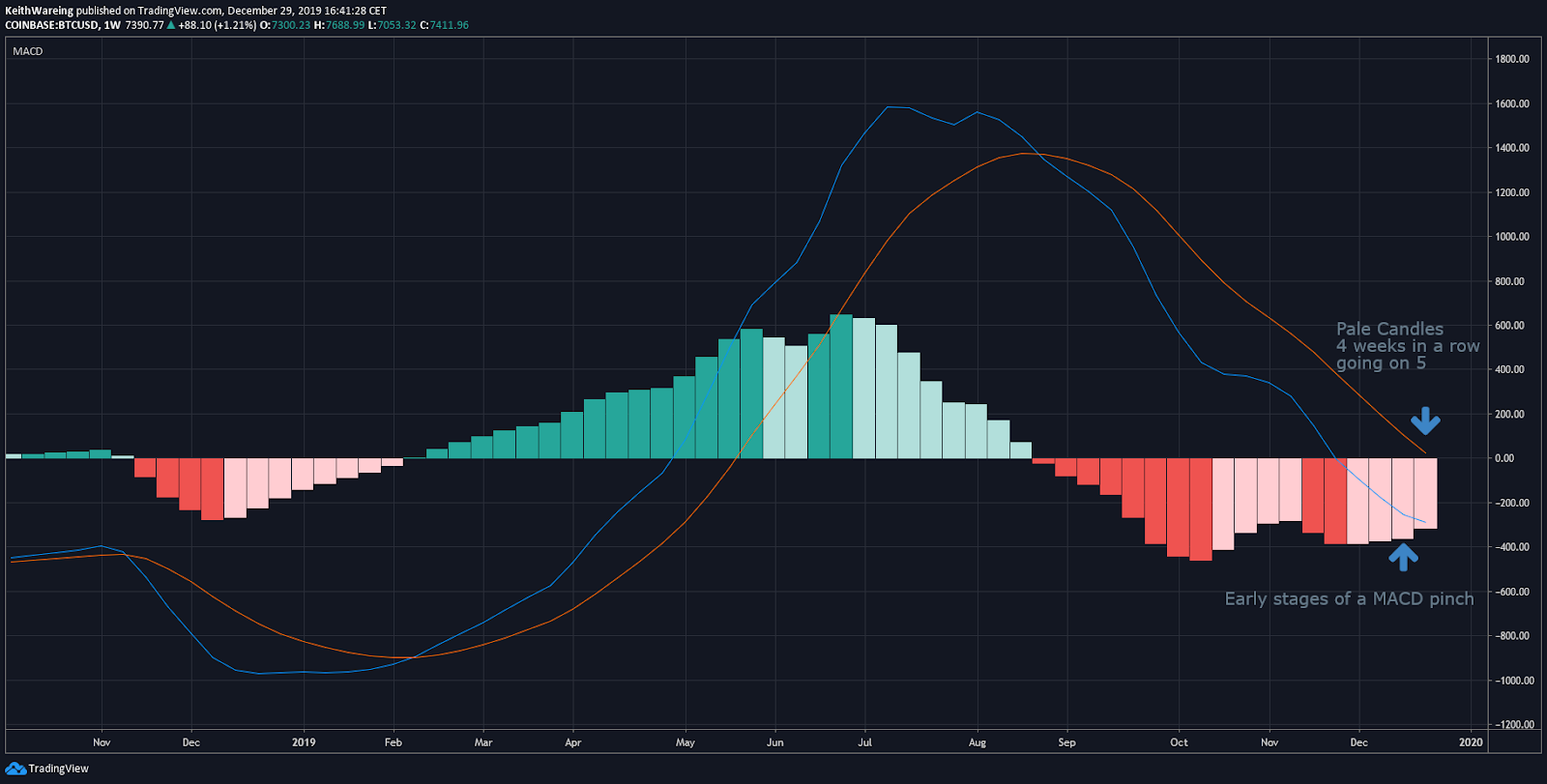 The Moving Average Convergence Divergence (MACD) indicator is showing early tell-tale signs of a bullish reversal. However, I don’t expect this to continue. As can be seen in the image above, the MACD line changed its bearish course on Dec. 16, but why?

I believe that due to a lack of institutional interest over the Christmas period, the market was easily moved upwards, which has changed the trajectory and with it, has continued to print pale pink candles, which are getting shorter by the week, usually indicating a cross into green territory. This has given some hope of a relief rally before the real pain begins for Bitcoin.

But where could we see the digital asset move? 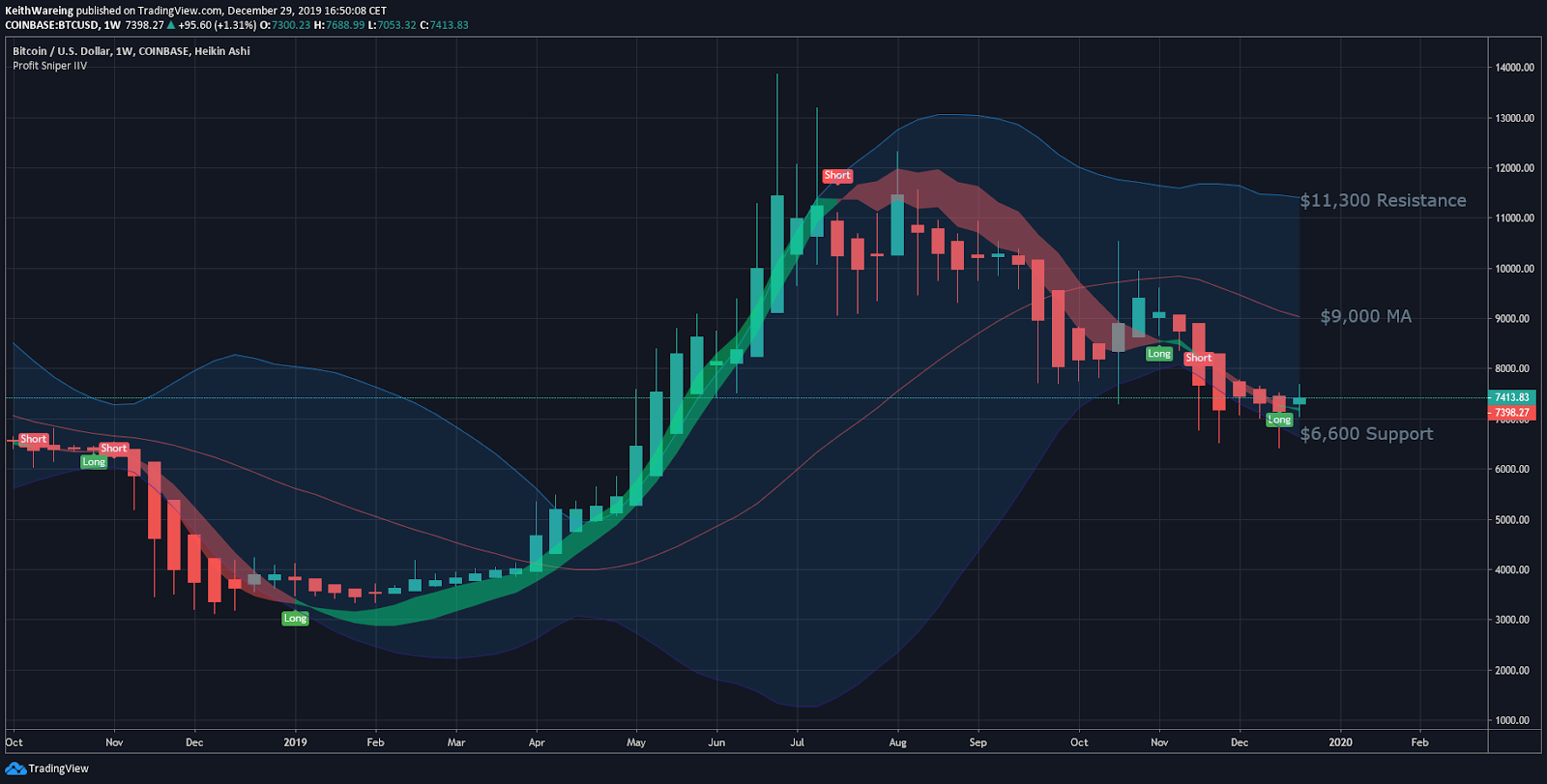 Using Bollinger Bands (BB) Indicator overlayed with my indicator that shows pivot points based on momentum, Bitcoin appears to have entered a short-term bull phase that will most likely see a rejection around the moving average of $9,000.

I believe this to be the case, as short-term low liquidity pumps falter around the moving average, as can be seen at the end of October. This is where Bitcoin price experienced an unnatural pump, which saw the digital asset climb around $2,500 in 48 hours, and despite a momentary wick above the MA, it failed to hold above this point and soon resumed its bear trend, feeding off the blood of hodlers at the bottom of the BB.

As such, with the institutional players easing up over the holiday period, it’s a perfect opportunity for the price of Bitcoin to be pushed up to around this level.

At this stage, you may be asking why I only see a short-term relief rally and not a full reversal. The reason for this lies in the Relative Strength Index (RSI) indicator. 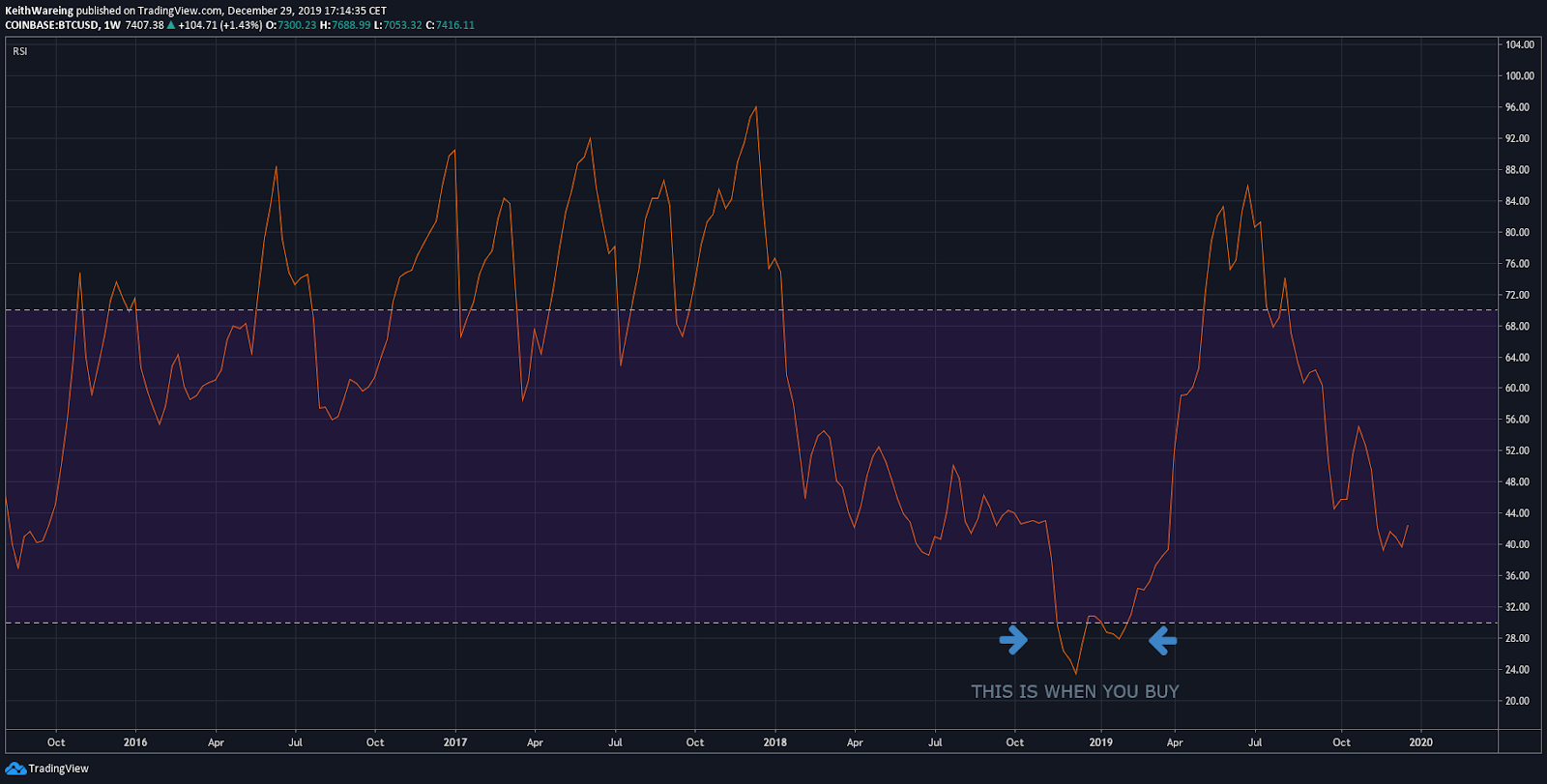 The RSI is currently very much in the middle with a reading of 42.20 on the weekly. This doesn’t signal anything to anyone, and as such, would not attract any significant money into the market. When the RSI is planted between 30 and 70, we’re simply in a ranging market where scalpers feed and hodlers bleed.

Right now, anyone with any significant cash holdings would be hesitant to go all-in on an asset at this point, whether it be Bitcoin or anything else. As such, this to me says we must first see more downside before Bitcoin becomes an attractive investment opportunity for smart money.

You only have to look at the end of 2018 and the beginning or 2019 where Bitcoin held an average price of $4,000 to see why the RSI is a valid indicator for buying Bitcoin, as buying in the oversold territory would have seen you gain over 300% on your investment throughout 2018.

The Daily RSI is Neutral 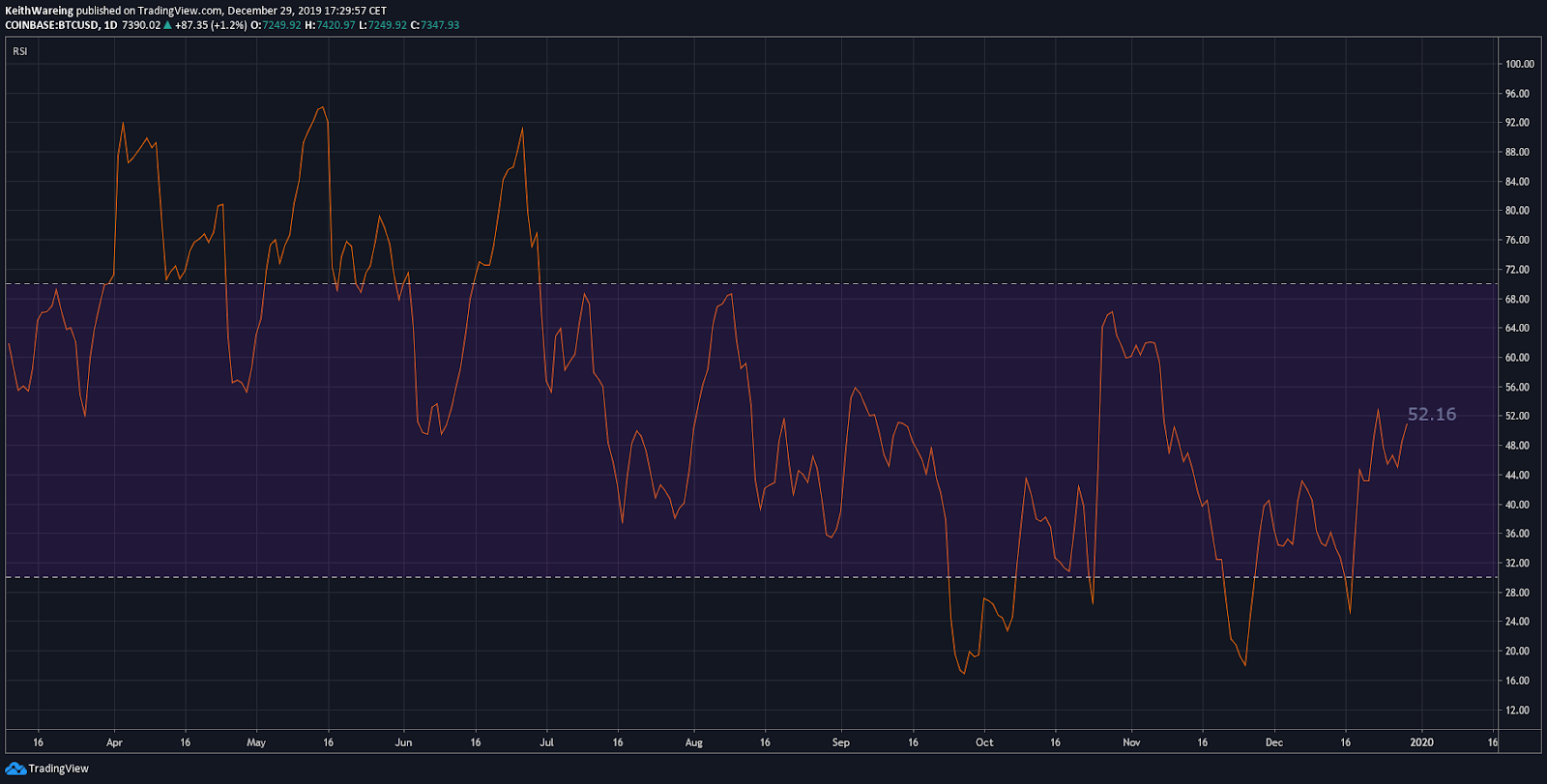 The daily RSI is also incredibly neutral, more-so than the weekly RSI. It’s currently sitting on 52.16, which again sends no buying or selling signal to investors.

A pump towards $9,000 would certainly plant this in oversold territory, which could spark a sell-off, with people trying to cover their hemorrhaging losses after FOMO-ing in at $10,000 levels earlier this year thanks to a wave of social media influencers prematurely declaring that BTC is in a bull market.

Incidentally, the monthly RSI is reading the same as the daily, so no need to look at that today. However, I will look at the monthly BB.

Bitcoin is struggling to stay above the Moving Average 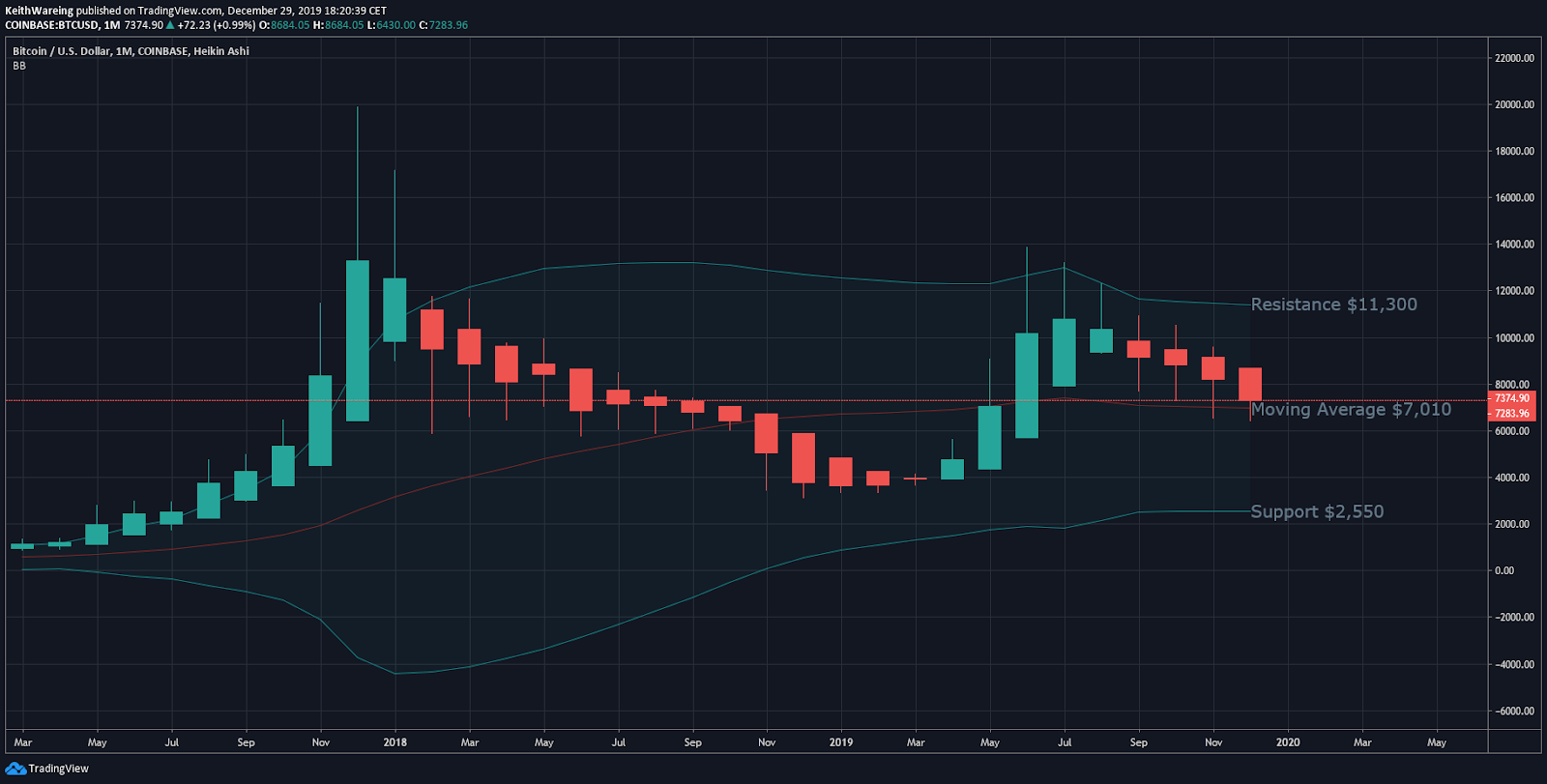 As Bitcoin continues to stay in a sidewards range, the inevitability of an extinction-level event that will cause even the die-hard Bitcoin maximalists to question why they HODL lines of code, looks more and more likely.

Having pierced through the MA two months in a row, and with the red candles getting longer by the month, it seems that Bitcoins support is only around $400 away, before