This week Bitcoin is expected to continue consolidating even as the weekly MACD is on the verge of a bull cross. Meanwhile, key indicators suggest that Ether price could explode higher.

To a new investor entering the crypto-space sights like today’s 3.5% pump to $9,141 is enough to make you giddy with excitement about the future of cryptocurrency.

But is it that impressive? After all, Bitcoin (BTC) price was $9,300 last week, which is $200 higher than it is now. So let’s take a look at some of the factors causing, and fuelling these swings.

Last week many traders were screaming for $8,885 to be filled, and even though this is becoming quite a regular thing, world-renowned Bitcoin hater, Peter Schiff took to Twitter to call for a dump in Bitcoin price. Schiff tweeted,

“It looks like the #Bitcoin pump is finally over. Get ready for the dump!”

Of course, one only has to look at the engagement Mr. Schiff receives on his anti-Bitcoin crusade to see that he gets 14 times more interaction on his crypto tweets than he does on his dreary tweets about gold.

Outside of Schiff’s ever dreary tweets, the situation seems to be improving for Bitcoin. The CME gap has been filled so what can traders expect from Bitcoin over the coming week? 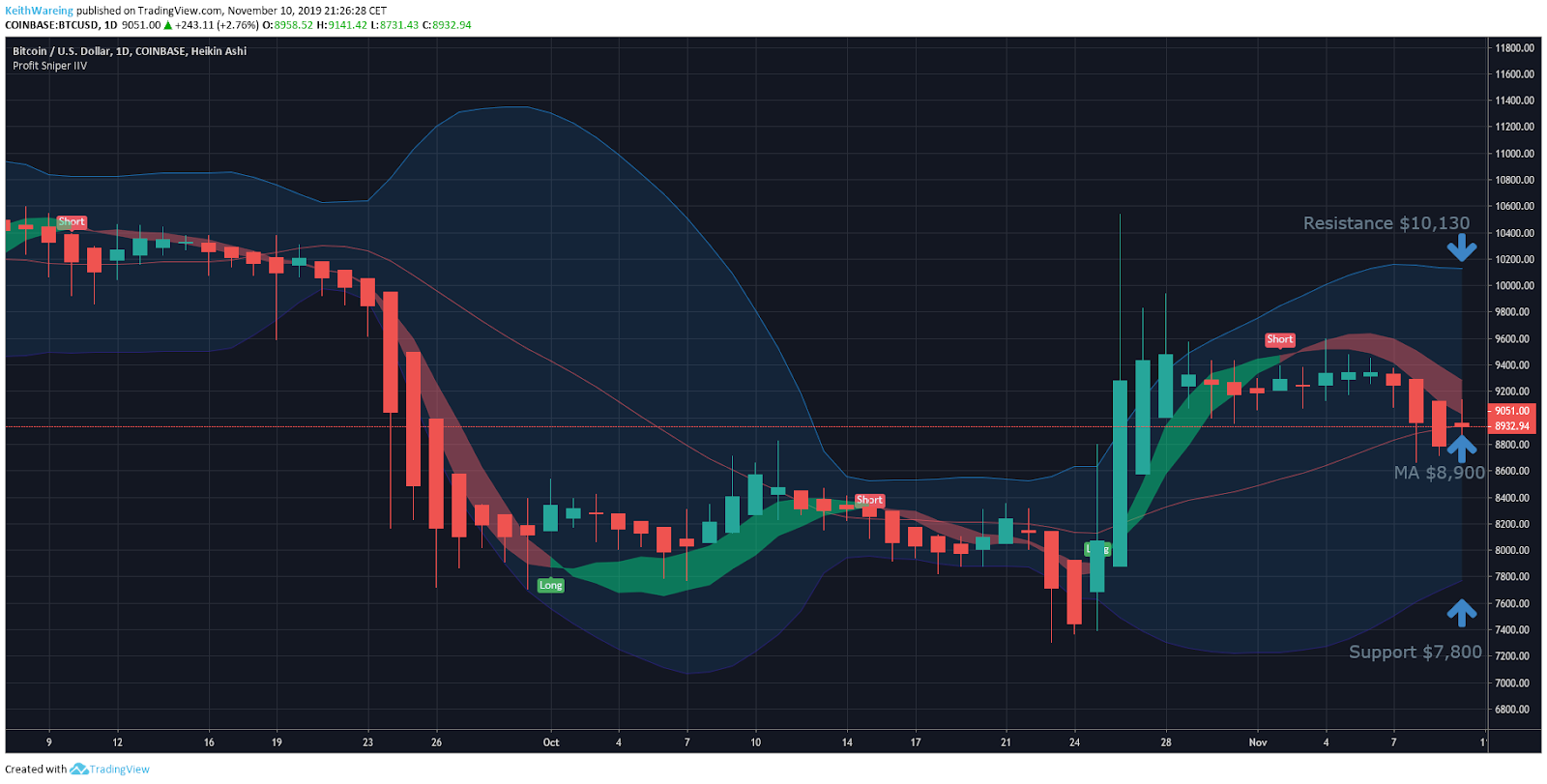 The Bollinger Bands indicator on Bitcoin’s daily chart shows that the price has been hovering around the moving average (MA) which is now near $8,900 since the CME gap was filled.

When the price is set so close to the middle of the indicator traders could be fooled into thinking the odds of falling to the support at $7,800 are equal to the odds of the price rising to the resistance of $10,130. Fortunately for the bulls, there are quite a few factors that suggest the price is more likely to rise over the next week rather than fall.

This question can be answered quite easily as one only needs to look at the trading volume of Bitcoin on weekends compared to weekdays to see that the volume is much thinner on Saturdays and Sundays compared to the working week.

As such, it would be entirely plausible to consider that as the markets open across the world on Monday, trading volume for Bitcoin will increase, and this would be a key factor in driving the price. But forecasting volume alone, cannot guarantee an increase in price, so to find more reason for this, one must also take a look at a couple of proven indicators to better gauge the next move. 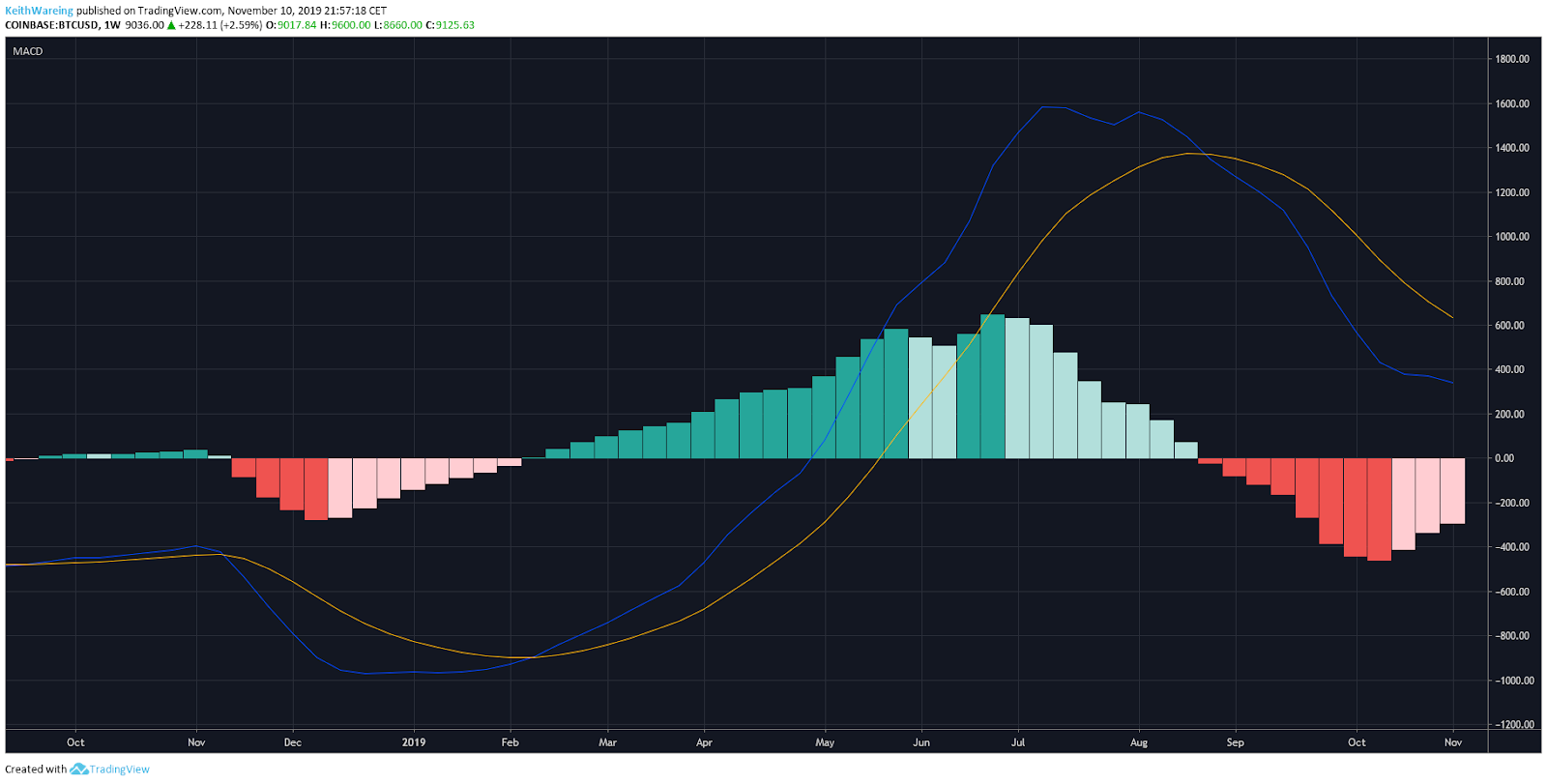 Out of all the technical indicators available, the Moving Average Divergence Convergence (MACD) is the one to watch on the weekly timeframe. The price dump on Nov. 8 caused the oscillator to alter its trajectory ever so slightly, however, thanks to Sunday’s price rally, it seems increasingly probable that a bull cross could occur in the next 2 to 3 weeks if not sooner.

When the MACD crosses bullish on this time frame, Bitcoin never fails to impress, as such this is a huge buying signal to traders. As mentioned earlier, it’s still not quite there yet, however it is on another popular crypto asset.

Ether set for a bull cross on the weekly MACD 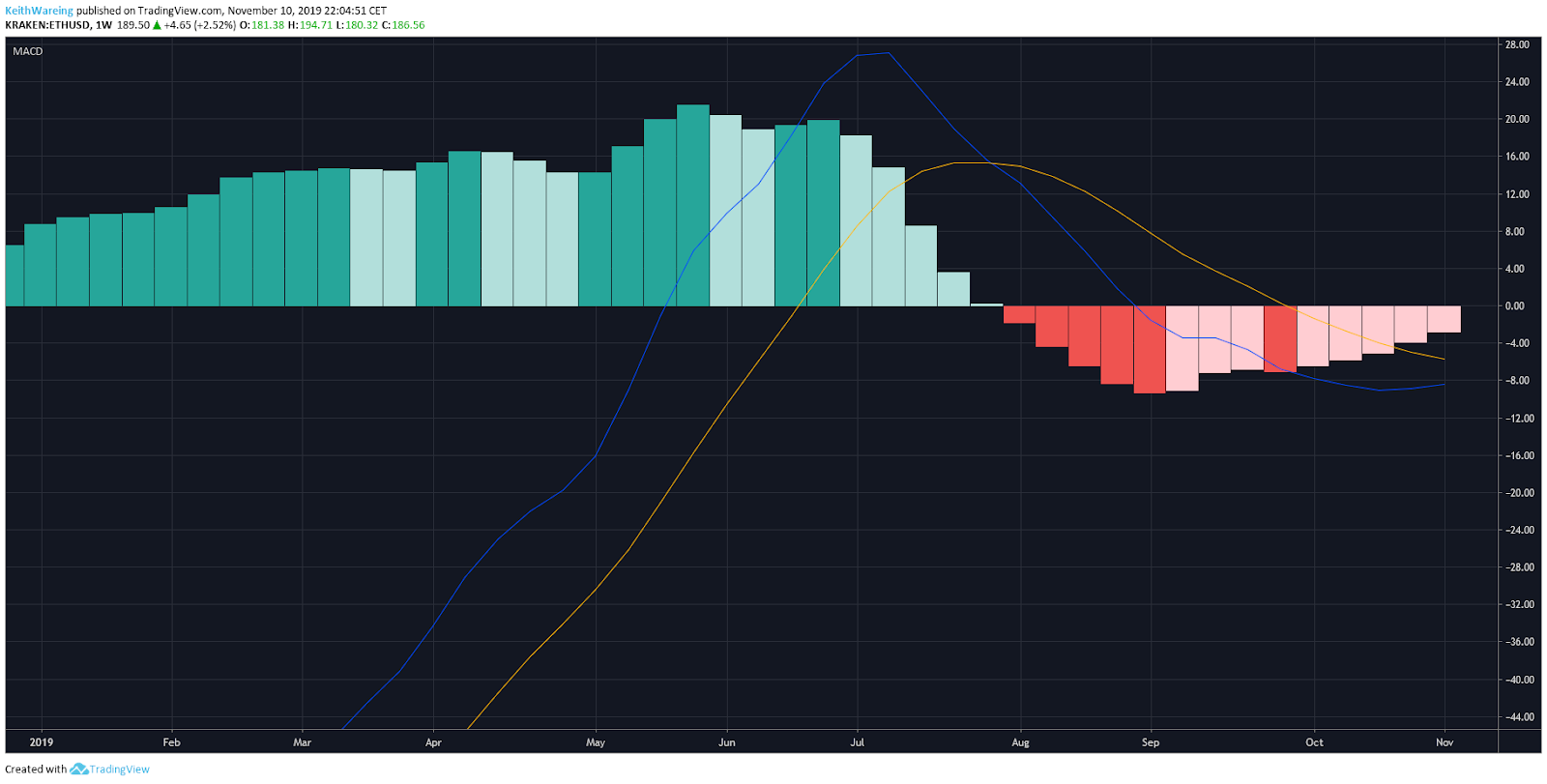 Last week’s analysis covered a similar scenario for Litecoin (LTC) and since then the altcoin increased by 13%, rallying from $57.64 to $64.27 within just 4 days. Right now, Ether (ETH) is looking almost identical from a technical perspective, with the only difference being the fact that the digital asset could catalyze a number of altcoins to rally due to their pairings across many exchanges.

Therefore, it’s safe to ask, Is this the start of the next altcoin season? Let’s take a look at where Ether price could go 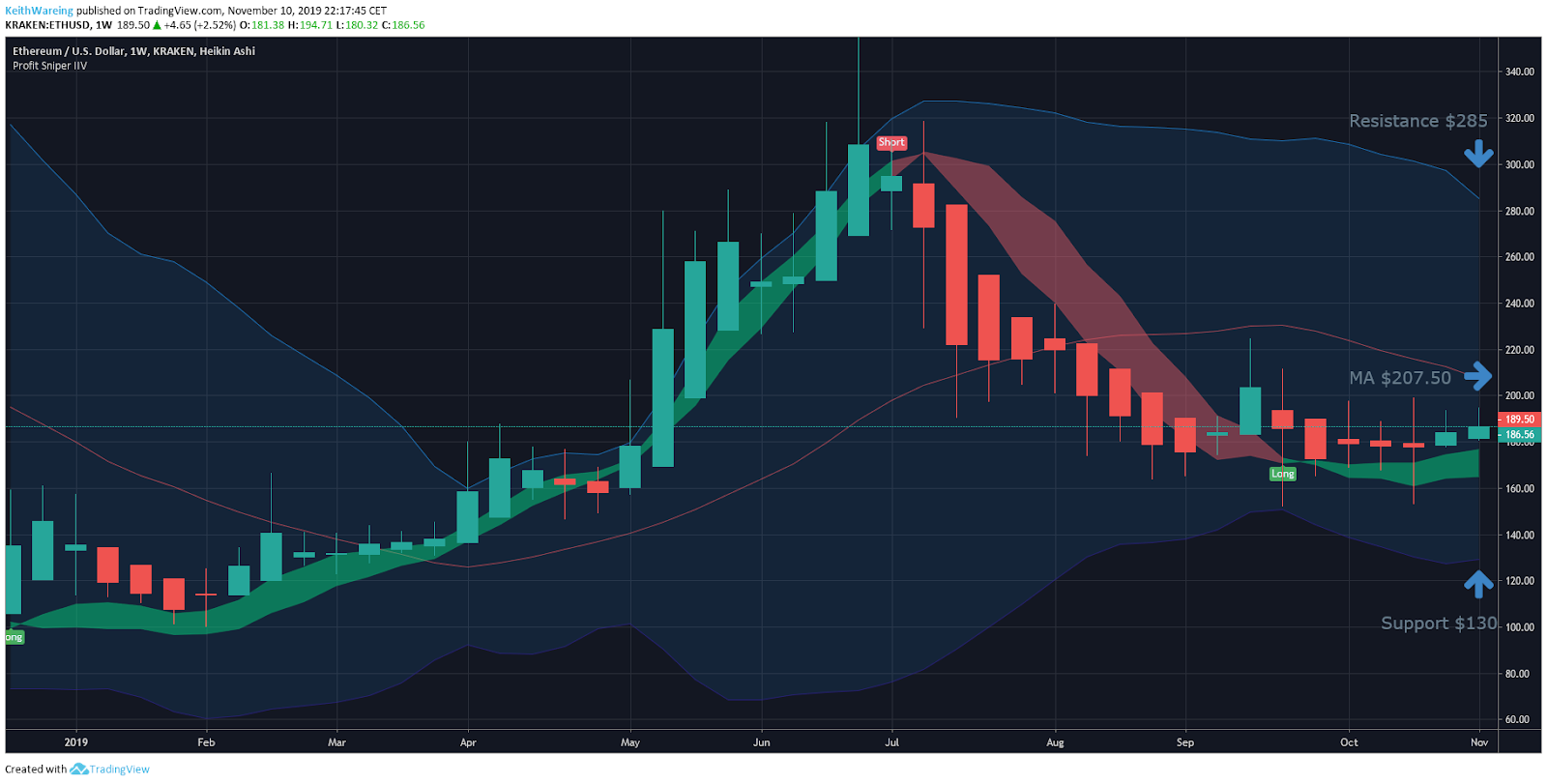 If Ether were to rally, this would be a welcome pump. Assuming that Ether tallied the same percentage of gains that Litecoin experienced last week, the price would sit $5 above the moving average on the Bollinger Bands indicator.

This could set Ethereum up for a run-up to around $285 which wouldn’t just bring the Ethereum market capitalization up by 30%, it would also potentially have a huge knock-on effect with ETH-paired altcoins which could trigger a retail FOMO phenomena similar to the one seen in 2017.

Bitcoin needs to fend off a few areas of support. Should the current support of $8,900 fail to hold, it opens up a new level around $7,800 that needs to be defended. One would hope that the days of seeing the Bitcoin price at this level are over for 2019, however, it was only a few weeks ago that the majority of Bitcoin bears on Twitter were calling for $6,000 Bitcoin this year. Should $7,800 fail to hold, this could then become a reality.

As the weekly candle closes, it is likely to send a strong buy signal to traders. Bitcoin has to first break $9,900 before investors and traders alike can expect a 5 digit Bitcoin. Should Bitcoin price exceed expectations and march past $10,000 to find support above $10,130, then the digital asset will be set for a bullish MACD cross in the immediate future. This could be the push Bitcoin requires to achieve a new all-time high.