Bitcoin price is attempting to rebound from this week’s slump as it heads into the weekend that might see a relief rally, but don’t bet the farm just yet.

The price of Bitcoin (BTC) has headed north over the last 24 hours, up over 1% at $7,272. As a result, each of the major cryptocurrencies has followed the market leader with the total cryptocurrency market cap reaching $198 billion and BTC dominance remaining steady at 67% of the total market. In other words, Bitcoin’s market cap now stands at $132 billion.

Despite a strong finish to the week, the price of Bitcoin is down 3.2% from the opening of $7,520 on Monday morning. The 50 and 100-week moving average (WMA) crossed this week, which is typically a sign of a market shifting to a more bullish trend. But as it stands, Bitcoin remains below the 100-WMA and has been unable to break through the previous support that has now turned into resistance at $7,600.

It is critical that the $7,600 level be reclaimed in order to be able to declare that there has been a fundamental shift in market structure that favors the bulls. Currently, trading volume remains in decline, showing a general lack of selling pressure in the downtrend and this may indicate a reversal could be pending.

The MACD is trending down below zero, which is another bearish signal but there is also an unconfirmed bullish divergence building on the histogram. This helps to identify that the downward momentum is in decline.

The daily timeframe shows that Bitcoin price is still supported by the point of control at $7,200; the price where the most volume has traded in recent times. This is also the middle of the current trading range and also an important level to pay attention to as a loss of support here would open the door towards retesting the range lows in the mid $6,000s.

The moving average convergence divergence indicator, or MACD, is currently below zero but the signal and MACD line are trending to the upside and crossed bullish, which can explain the attempted bullish reversal today.

The 4-hour chart clearly shows the price failing to make it to the top of the range earlier in the week and subsequently recording a lower high. This means that now there is some compression into the low $7,000s with $7,200 propping up the price.

The 4-hour MACD and RSI are both showing signs of a trend change to the upside, which implies that price may go higher over the weekend.

The one hour chart shows that Bitcoin has formed a rounding bottom, which is in the process of attempting to break out to the upside.

This — combined with a bullish MACD above zero and a breakout in the RSI — would imply that there may be an attempt by the bulls to retest $7,400 over the weekend. Since weekend price action has a history of quickly reversing into the new week any weekend opportunity may be short-lived.

The CME futures are currently trading with a small premium over spot prices whereas they’ve been trading with a discount in the week prior, implying that traders are generally neutral on the future price of Bitcoin versus today.

The commitment of traders report is a report issued by the Commodity Futures Trading Commission, or CFTC, which records the holdings of various market participants. As it stands, retail traders remain the most positive about the price of Bitcoin. Professional traders have moved from net long to net short and institutions remain short but there is a notable shift in their exposure to the downside. 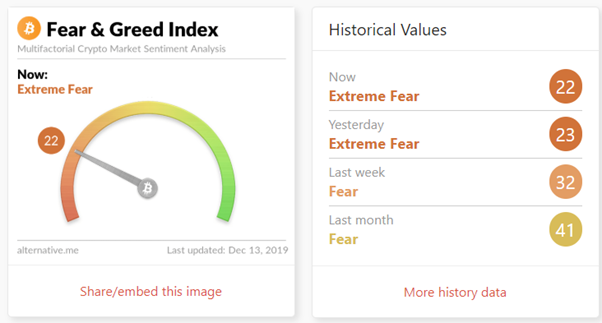 The Bitcoin Fear and Greed Index meanwhile shows that the move down to the middle of the range at $7,000 has helped shift sentiment to an Extreme Fear score of 22.

Historically there has been a correlation between low sentiment scores and reversal in price, but typically these reversals are seen when the index score is below 20 as was seen for a sustained period between December 2018 and January 2019.

Overall, there as some signs that Bitcoin may be in the early stages of reversing the downtrend that looks to be losing momentum. The market is shaping up to look as though there may be a push to the bullish side over the weekend, but this is likely to be temporary as has been seen in the past.

Sentiment and positioning of retail investors going into the end of the year would suggest that despite there being fear in the market, participants have not been shaken out. A shakeout may still need to occur before the BTC/USD pair and the cryptocurrency market as a whole can finally make a more fundamental reversal.