While Bitcoin’s value seems to have stagnated over the past few months, some believe that a price surge is just around the corner.

As the global economic engine continues to reel from the effects of the slowdown induced by the novel coronavirus, it’s still not clear how much devastation the pandemic has actually caused. For example, due to the restrictions imposed by governments all over the world, such as border lockdowns, trade limitations and import/export reductions, economic movement has almost ceased, causing many businesses, both large and small, to either face up to the losses or shut down completely.

Furthermore, traditional financial offerings such as stocks, bonds and equities have also been on the receiving end of a beating since mid-February, with many well-respected economists warning that the global economy is once again heading in the direction of a major recession — the effects of which will most likely be more profound than any of the other slowdowns witnessed in the past.

To put things into perspective, the FTSE 100, Dow Jones Industrial Average and Nikkei 225 have all witnessed value drops of unprecedented proportions over the past four months. In fact, the Dow and the FTSE saw their biggest quarterly falls in more than three decades during the start of the year. 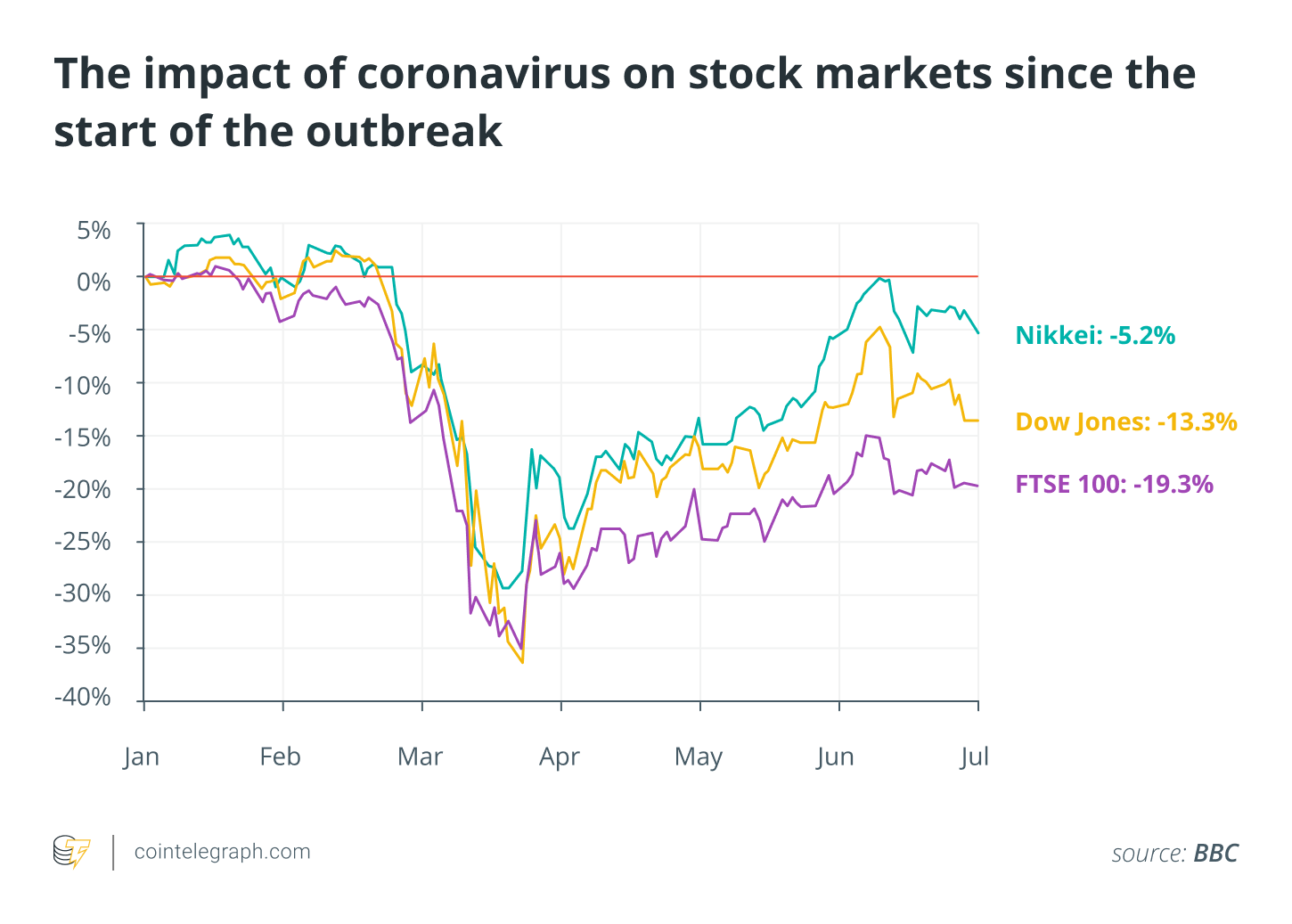 As a result of these developments, central banks all over the world have proceeded to slash interest rates to help boost consumer confidence, primarily by making borrowing easier. However, with a second coronavirus wave expected to sweep the planet by the end of the year, fears of further increased volatility still loom large on the horizon.

Despite the disorder that seems to have engulfed the global financial sector, it’s worth pointing out that since May, Bitcoin’s (BTC) value has not strayed beyond the $9,000–$10,000 range, barring a few short-lived exceptions. 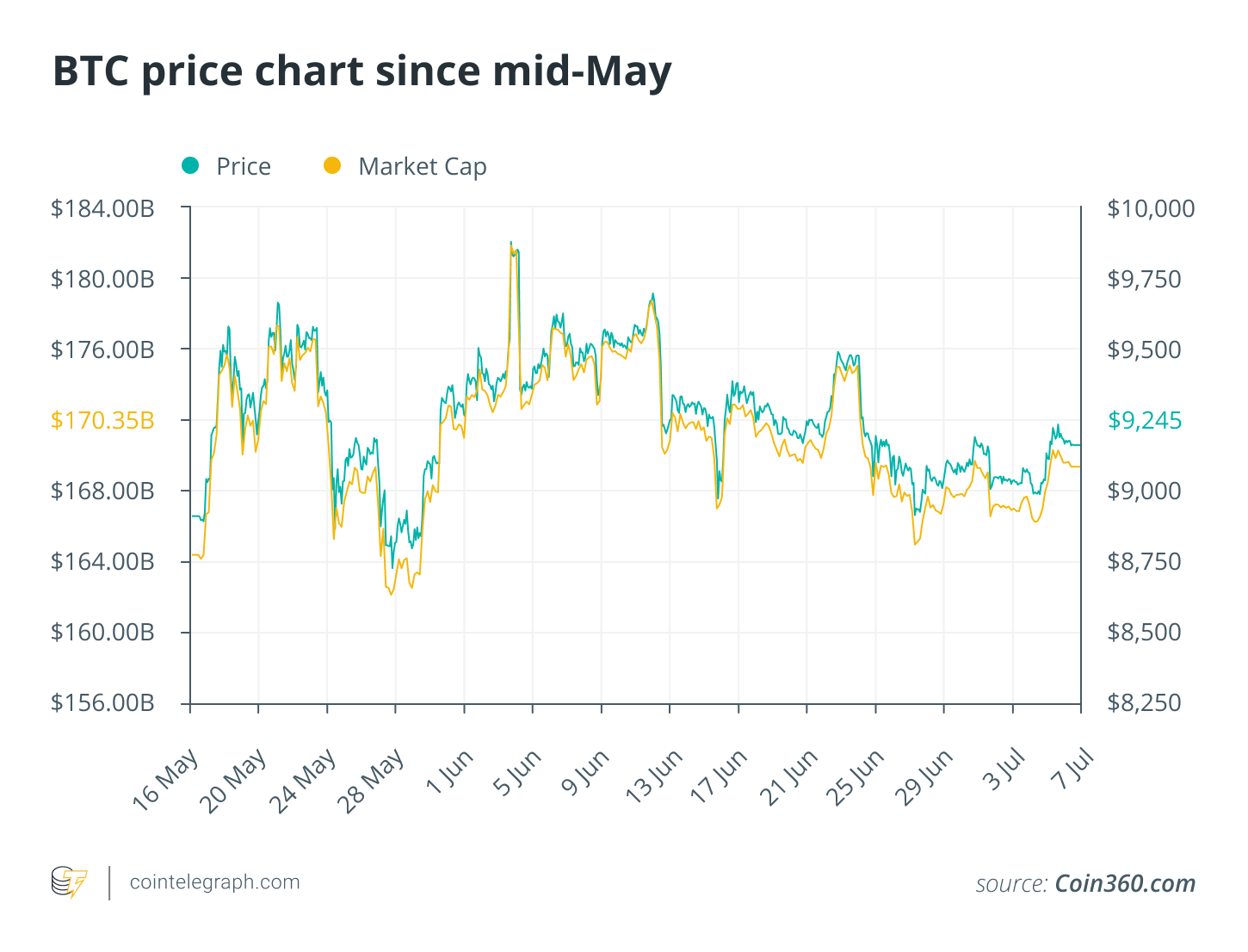 As a result of this newfound, albeit possibly temporary stability, a lot of casual investors have started to give more credence to the notion that Bitcoin may finally be morphing into the stable asset class that many had initially envisioned it to be.

Furthermore, this theory has gained even more ground since March’s “Black Thursday” crash that saw Bitcoin and gold — another well-regarded traditional store of value — exhibiting a stronger correlation following the event. Providing his insights on the matter to Cointelegraph, Jeffery Liu Xun, CEO of XanPool — a peer-to-peer fiat gateway — stated:

“No one will dispute the strengthening of Bitcoin’s perception among the traditional finance class. This is in part due to Bitcoin’s continuous market performance and resilience, but also largely due to traditional hedge fund managers like Paul Jones openly promoting Bitcoin, positioning Bitcoin as a hedge against the inflationary global financial policy.”

Additionally, according to crypto data analytics firm Coin Metrics, the above-mentioned correlation has never been observed historically and seems to suggest that more people are beginning to view Bitcoin as a digital safe haven. However, when it comes to comparing the price action of the two assets, BTC seems to have outperformed gold.

With that being said, prior to Bitcoin’s current stable position, the currency was very recently faced with periods of unprecedented volatility. Throughout the last couple of years, drops of $2,000 to $4,000 could be seen happening on a near-weekly basis — so much so, that throughout the course of 2018, BTC’s value dropped from a relative high of around $14,300 to a shade under $4,000. In this regard, during the exact same time period, the value of gold showcased a staggeringly low level of volatility, sticking to a price range of roughly $1,200 to $1,360 for the entire year.

Lastly, even though many are gushing about the renewed market confidence in Bitcoin, it is worth remembering that following the flagship crypto’s much-hyped halving event that took place in May, the currency’s value remained almost flat, and its volatility levels are now seeing record lows.

When examining the issue of BTC’s current lack of price action, it is worth pointing out that if one were to look at the currency’s value movements at this exact point following its 2016 halving cycle, it would become quite apparent that the asset was behaving pretty much in the same way as it is now. In fact, it was a year and a half after its 2016 halving, around mid-December 2017, that BTC proceeded to reach its all-time high value of around $20,000.

Additionally, the volatility and uncertainty surrounding traditional financial markets have failed to translate into a direct increase in demand for Bitcoin, as the coronavirus-induced panic has seemingly highlighted the need for alternative monetary systems rather than pushed Bitcoin to the center of the global finance stage. For example, when the coronavirus began to grip the world at the start of the year, BTC fell from almost $8,000 to around $3,600 on some exchanges all in the span of less than three days between March 11 and 13, placing its safe-haven status under question.

Similarly, when stock markets all over the world were fluctuating wildly all throughout May, BTC also followed suit by mirroring the value drops being showcased by many traditional assets and commodities across the board, thereby worsening its perceived stability in front of investors all over the globe. On top of all this, the currency’s poor usability also seems to have limited its potential for widespread adoption at the time when it counted. On the subject, Nischal Shetty, CEO of WazirX — an India-based crypto trading platform — commented:

“Let’s also not forget, this is the first time that we’re experiencing a global economic meltdown of this magnitude. Considering the global economic situation, it’s great to see Bitcoin prices being stable and strong.”

Similarly, Ethan Taub, CEO of Loanry — a platform that connects people with lenders to source funds for their projects — believes that the Bitcoin market has been partially halted because of a lack of buying and selling. Though mostly dormant, he believes that after this period of stagnation, there may be a drop in value, following which, BTC will experience a price surge.

Another potential cause for the ongoing stagnation could be due to many people recently losing their jobs and thus refraining from any risky trading activities. On the subject, the International Labor Organization has projected that during the second quarter of 2020 alone, more than 400 million people across the globe lost their jobs. The aforementioned job loss numbers are already 10 times greater than what was observed after the 2008 recession.

BTC’s future in the green?

Despite Bitcoin struggling to break past the $10,000 barrier for a few months running, the market at large seems to be quite confident in the premier crypto asset’s long-term potential. For example, a new crypto outlook report released by Bloomberg earlier in July shows that the report’s analysts are optimistic regarding BTC and believe it could very well approach the $12,000 threshold in the coming weeks or months.

To back up their claims, the analysts stated that due to the current economic climate, more people are beginning to understand the utility of crypto and how it can act to alleviate inflation-related issues. Not only that, but they also highlighted BTC’s recent low volatility in relation to major stock indices such as the Nasdaq as being a clear indicator that the currency is primed for big things in the near future. The report reads as follows: “Unparalleled global central-bank easing and rising gold values are enduring trends favoring a higher Bitcoin price.”