Financiers and investors fear that a “no deal” Brexit could spell “bust” for Ireland and the nations’ blockchain industry.

4544 Total views
161 Total shares
Listen to article
0:00
Analysis
Own this piece of history

Strong growth has returned to Ireland one decade after the banking crisis and international bailout. But, financiers and investors fear a “no deal” Brexit — in which the United Kingdom leaves the European Union without a trade agreement at the end of the month — could again destabilize Ireland’s boom-and-bust economy.

The U.K. received 11 percent of Ireland’s exports of goods in the past year, while supplying more than one-fifth of its imports. The Irish central bank conjectures that an orderly exit from the EU would decrease the gross domestic product by 1.5 percent, according to a Reuters story.

While the economic uncertainty — like in many countries — has driven curiosity in cryptocurrencies such as Bitcoin, Ethereum and others in Ireland ahead of Brexit, it casts a shadow over a burgeoning blockchain boom.

“It’s hard to see beyond the shadow of Brexit at the moment,” said Dave Fleming, global head of research and development for Mastercard Labs in Ireland. “If Ireland is affected, it will probably be similar to 2008 and the whole world might be affected so possibly blockchains might help.” The Irish will have to wait and see, he says.

If Britain leaves without agreeing to terms on the border with Northern Ireland, a more strongly enforced border could partially isolate Ireland and reignite conflict. According to Anthony Day, chief operating officer of Deloitte’s EMEA Blockchain Lab in Ireland, Brexit brings to mind the concept of a “digital border” between Ireland and the U.K. As Day explained:

“We see significant potential for Blockchain to provide the capability to enable secure, real-time and automated infrastructure to support trade, reporting, and the movement of goods and people. However, establishing the relevant working groups, governance, deploying such platforms and completing the necessary transformation within both public and private sector organizations would be a multi-year initiative, and the timescale for Brexit is immediate.”

Brexit has dampened Irish consumer confidence and stymied foreign investment. Ireland’s biggest companies are drawing up backup plans in case of a no-deal Brexit. Business owners fear tariffs, customs paperwork and delayed shipments of goods from Britain. AIB, Ireland’s biggest bank, said this past Monday that one-third of companies have canceled or postponed investments because of Brexit.

“A Brexit ‘no deal’ is clearly the biggest concern,” said Raul Sinha, a banking analyst at JPMorgan Chase.

According to Day, blockchain is flourishing in Ireland. The exchange Coinbase, development company Consensys, and Wachsman PR have all opened offices in Dublin. Deloitte deliberately chose Dublin as the home for the EMEA Lab and invested in a dedicated facility.

Day notes that the Irish government has committed 500 million euros toward its Disruptive Technologies Innovation Fund. Through the fund, business and research groups can apply for funding to progress blockchain and other technologies.

“Well, as far as I can see, there is a massive uptake of crypto inside financial firms. From people I have talked to inside the industry, I’d say most firms, including the Big 4, as well as most of the banks located here, will be moving most of their verification methods to the blockchain within a few years. People from all over the tech sector are picking up crypto and figuring it out.”

ConsenSys, which opened an office in Dublin last year, remains active in the city.

“What is surprising is the amount of blockchain activity taking place in Ireland,” ConsenSys Ireland MD Lory Kehoe told Cointelegraph. “While the blockchain eco-system is relatively new in Ireland we are seeing rapid development of the market here.” 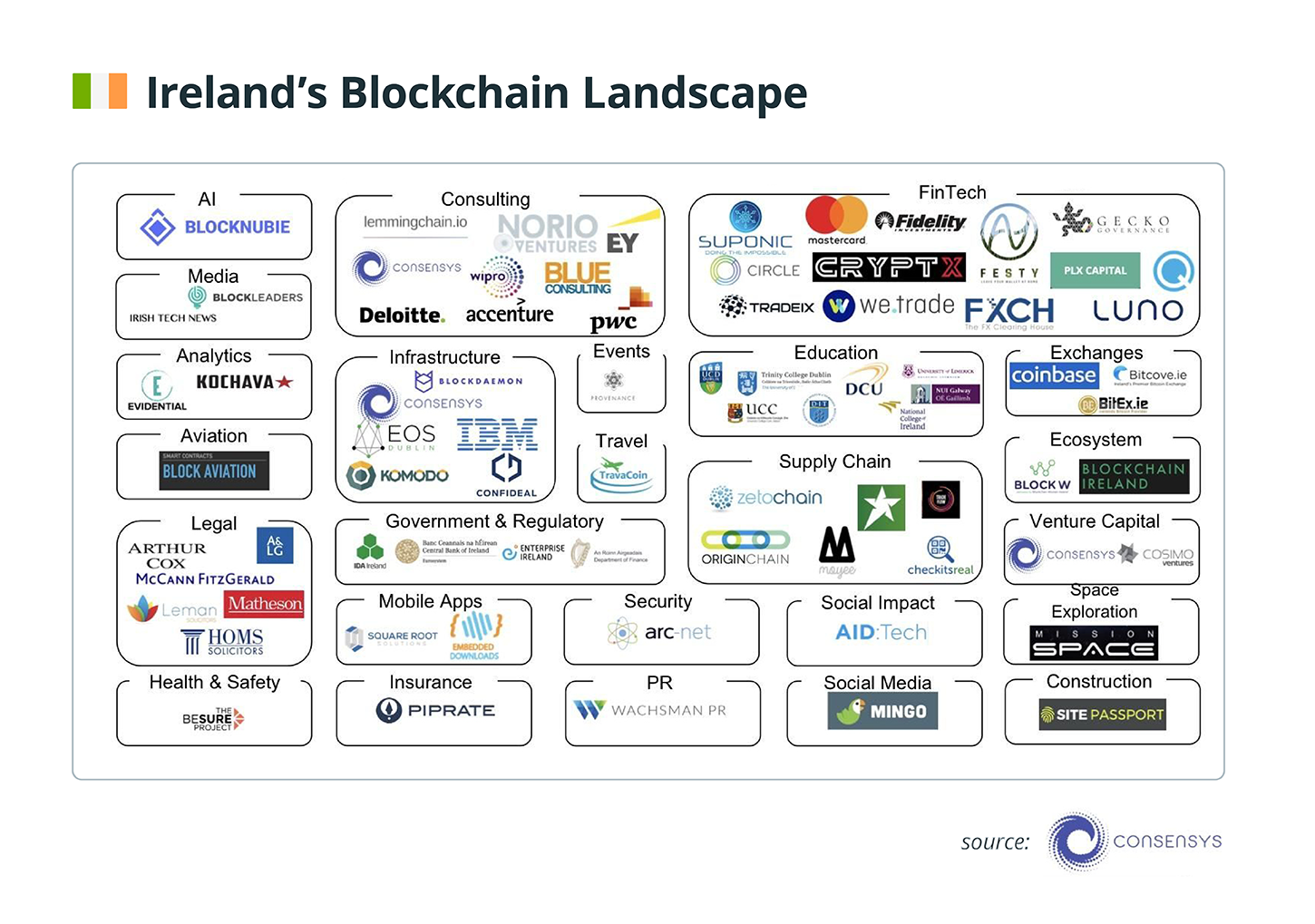 Kehoe cites working groups like Blockchain Ireland (BI), a group of government and private companies and individuals, as a big part of the development of the ecosystem there:

“Ireland has a number of fantastic third level programmes in computer science and also a talent center of thousands of people who have come to work for some of the major social and tech companies that have their EMEA headquarters here.”

He believes, however, more needs to be done to ensure that coding and developer education is introduced to the education cycle early.

“Business and government need to work together to equip Irish citizens with the skills they need to work in the economy of the future,” Kehoe said.

“The whole of Ireland will go crazy for Blockchain,” Godsil said.

The growth of the blockchain industry comes as tech and finance companies move to Dublin — many are coming from the U.K. ahead of Brexit. So, while throughout history the Irish have left their homeland to seek work, hundreds of U.K. businesses are already relocating to the Emerald Isle in order to keep operations based inside the EU, thus creating more jobs for those living in Ireland.

Barclays, Bank of America, CitiBank, Google, Facebook and more are all moving their EU headquarters to Ireland from London. Citibank and Bank of America have merged U.K.-based subsidiaries into Irish subsidiaries, bringing in billions worth of assets to the country.

Still, Brexit looms. It could decide whether Ireland’s boom continues or goes bust. In the words of Mastercard’s Fleming, we’ll have to wait and see.