Blockchain in Media: How Blockchain Can Help Advertising

Advertisers and brands are increasingly losing patience with ad agencies and other players over the lack of transparency in the digital advertising space. Digital ad revenue for the first half of 2017 came in at a record $40 billion, up from $31 billion for the previous year, and it was estimated to have reached $85 billion by the end of 2017.

The fight for transparency intensified in 2017 after The Times of London published a report about how the ads of big brands were appearing alongside racist videos on the giant video platform YouTube. Several brands paused their spending on YouTube advertising temporarily, until YouTube reassured them that it had taken measures to correct the issue.

The issue with YouTube speaks to the larger theme of a lack of transparency in the space. There isn’t enough information at the disposal of the advertiser regarding what they’re buying and how much they’re paying for viewed ads. Duracell, furious after finding out how much of its money goes to hidden fees compared to the actual amount it spent on ads, built its own advertising audit system, whereby it relates directly with a demand-side ad platform and a brand safety vendor — all in a bid to be more informed of its advertising moves. Simply put, advertisers are looking for a more transparent way to connect with their customer and audience.

How does traditional ad buying work?

Typically, the advertiser — the brand that’s looking to connect with its audience — contracts a digital ad agency to manage its entire ad campaign, with the advertiser having a set target it aims to achieve from the campaign. The advertiser pays the ad agency an amount that would cover both the overall cost of creating ad content and the cost of distributing the ad content to the brand’s target audience/customers — these two types of costs are what digital media experts call non-working and working spend respectively. One thing to note here is that an ad agency’s overhead cost is also part of the non-working spend.

The first part is fostered by the long nature of the programmatic ad supply chain, as shown in the image below. 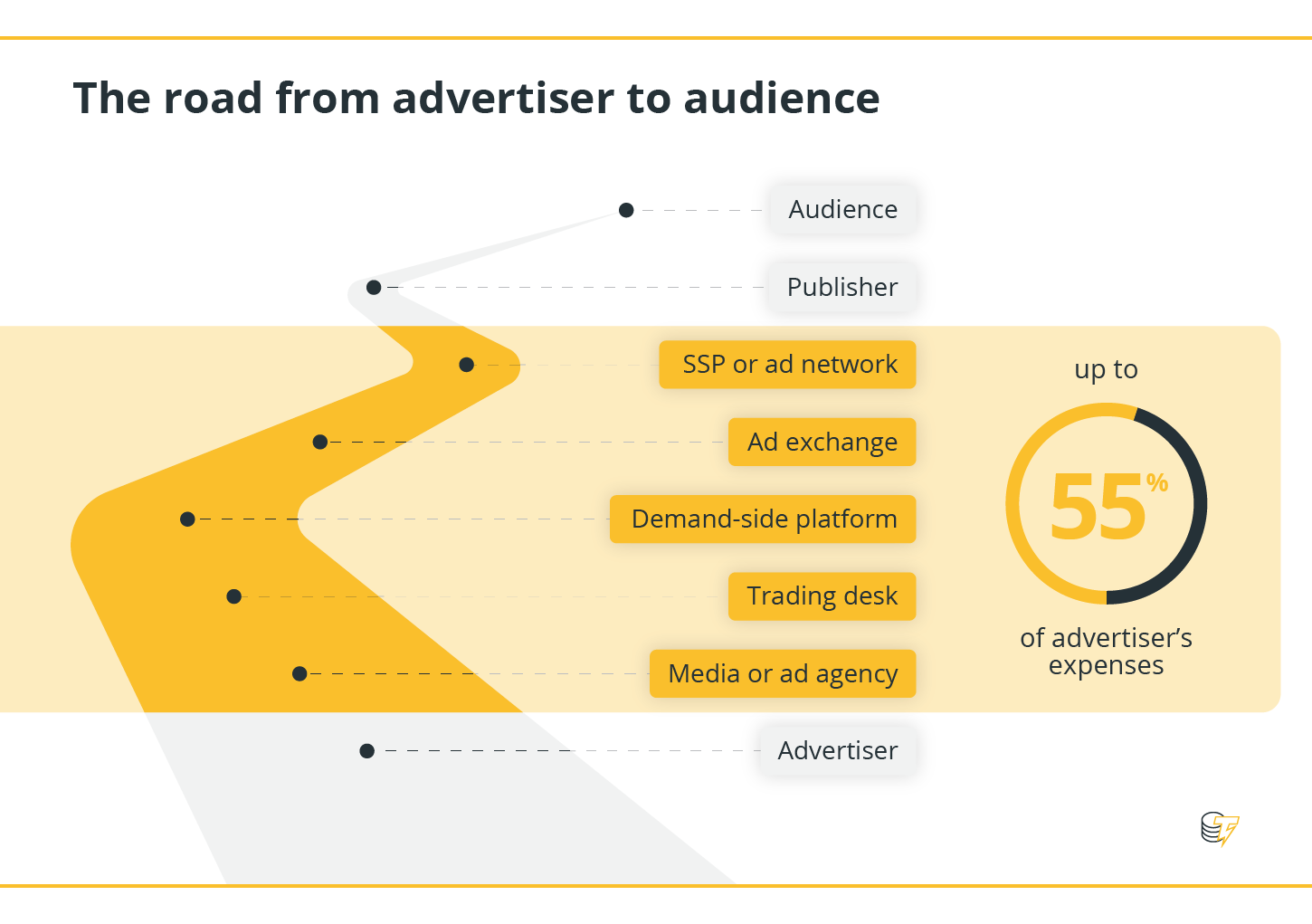 With each arrow in the image above, you can think of ad dollars being transferred diminishingly. And in many situations, the advertiser isn't aware of how much each player in this system takes. According to a report from the ad industry trade group IAB, 55 percent of programmatic ad revenue goes to ‘ad tech’ services, while publishers receive only 45 percent. The findings from IAB demonstrate that non-working ad spend (ad dollars that didn't get to the publisher) cost advertisers more than working spend. There are two problems here. First, advertisers don’t usually receive sufficient information about these costs. During a Digiday Programmatic Marketing Summit earlier in the year, an unnamed advertising executive said:

“If we have problems with [transparency] today, then it’s not because of the technology powering advertising — it’s because we’re not sharing the information needed to stop brands [from] throwing money into a black hole. We’re having these conversations about transparency over and over again, but the knowledge needed to change the situation isn’t being shared.”

The second problem is that publishers, who actually provide the platform for brands to reach their audiences, are paid less than the intermediaries.

The ad fraud and viewability part of the overall transparency issues originate from publishers selling fake impressions (fake clicks and bot traffic). Domain spoofing, whereby a publisher somehow presents his domain to be a larger publisher’s domain, is another part of the fraud problem. Ad fraud reportedly cost the U.S. advertising industry about $6.5 billion in 2017. Again, as in the case of hidden fees, sufficient information on how publishers verify their traffic, and the processes that ad agencies and other intermediaries follow to ensure that they work with publishers with verified traffic, needs to be available to everyone within the ecosystem.

Here are a few practical ways that blockchain can help bring transparency to the ad buying process.

For buy-side transparency: Blockchain for auditing

Truth Agency, founded by U.K.-based The Marketing Group, is working to help alleviate the transparency issues in programmatic advertising, mainly by rapidly auditing advertising transactions. As been stated by CEO Mary Keane-Dawson:

“We believe that advertisers are not seeing the full picture, in some cases money flows backward through the supply chain to pay for fees not exposed to the advertisers.”

Given that the problem of transparency is systemic rather than technological, Kean-Dawson believes that taking the entirety of ad buying to the blockchain is an unnecessary and complex endeavor, and that is why Truth Agency is only looking to use blockchain to audit ad transactions.

The blockchain startup looked at the ways some of the existing auditing services worked and simplified their processes by splitting it into two key parts: data collection and media contract verification.

The media contract is a ‘dumb contract’ that features the suppliers allowed within a certain campaign:

“These suppliers, along with the agreed fees (%, fixed price or CPM), whitelists, blacklists, etc. are recorded, along with what we call threads that allow us to match data between suppliers are recorded in a contract file and then transferred to the blockchain. The data collection element currently takes data from the various DSP, SSPs and publishers for the campaigns that we run, [and] this data is stored [in] the blockchain.”

Once Truth has the contract and data stored on the blockchain, it then processes each transaction from each supplier based on the rules written in the contract and publishes an audited version onto the blockchain on an hourly basis The company flags any transactions that cannot be verified through the data it has, such that both the advertiser and the team involved would be notified about the discrepancies.

Global ad software giant Mediaocean partnered with IBM in June to use blockchain to bring transparency to the “entire lifecycle of an advertiser's media dollar flow.” As the statement goes:

“From issuing of the purchase order to the execution of media and payment — [IBM’s] blockchain is used to record all media transactions in a secure, immutable, standardized and comprehensive manner.”

Transparency issues on the sell-side relate to the fake traffic count, bot clicks and domain spoofing discussed earlier. Verasity — a blockchain-based, video-on-demand platform similar to Vevue — is working to improve publisher transparency with its proof-of-view (PoV) blockchain technology. PoV, which is currently pending patent, is built to securely verify and record content consumption within the Verasity ecosystem. PoV features publicly auditable logs that contain all the view counts as well as anonymized viewer information for media buyers to view, according to Verasity. The company claims that the information included in the logs are GDPR, PCI DSS and ePrivacy compliant.

Using smart contracts to document views and who gets paid

TV-TWO, a player in the digital TV space, is also using blockchain to improve the advertising industry. TV-TWO has created a Smart TV app — currently being tested on Samsung and LG smart TVs — that allows consumers to watch a free, personalized video stream that is curated by a supervised learning algorithm, enabling more organic content variety and relevance.

Through a campaign management tool, brands are able to book their desired advertising spots on TV-TWO using TV-TWO’s tokens. The startup employs a smart contract, which single-handedly manages all the payments within the TV-TWO ecosystem. The smart contract publishes all the transactions that takes place regarding any single ad video — from advertisers to viewers and TV-TWO — on the Ethereum blockchain without any input from the TV-TWO team.

TV-TWO’s supervised learning algorithm is able to serve consumers with highly relevant videos by picking up data on each consumer’s “preferences in traditional TV, in-stream behavior, surveys and other data,” co-founder Philipp Schulz said. To offer relevant ads only, the anonymized data is used for campaign targeting by advertisers. The promise of TV-TWO is to serve consumers with personalized content on TV and offer advertisers accurate, trustless information in their campaigns.

TV-TWO recently advertised 20th Century’s recent blockbuster “Deadpool 2” on its platform — as part of its partnership with 20th Century Fox of Germany. Markus Schneider, 20th Century Fox’s German CFO, said the company is delighted with the results of the campaign, stressing the advantage of having direct access to their target groups on TV and paying for actual viewers only. It’s noteworthy that Schneider joined TV-TWO’s advisory board after the “Deadpool 2” campaign.

The Problem with incentivizing people to watch ads online

Advertisers are likely to appreciate being able to potentially know the actual number of people who “saw” their ad, but it’s not certain that Verasity’s PoV and TV-TWO’s system will be 100 percent foolproof.

With Verasity, for instance, there’s no way PoV can confirm that a user — even if they meet all the criteria mentioned above — are actually watching a video, although this shouldn’t normally be a problem. After all, if a user visits YouTube to watch a video, they mostly do it for a reason, which means they’ll actually watch the video. It’s a different story with blockchain-based, video-on-demand platforms. The lure to use blockchain streaming services is to earn money by providing your data and watching advertisements.

It’s therefore possible that a user could view videos that contain ads for the sole purpose of earning some money. This means that it’s possible for a user to play a video in a way that meets all the above criteria but stay away from their streaming device to do something else while the video is playing — and still earn money. In this case, even with the publicly available and auditable information of views, advertisers might still be unable to get a genuine sense of the value they get from advertising with Verasity and any other platform with a similar model.

One could argue that the tokens available for earning might not be valuable enough to encourage people to try to trick the system in this way. While that could be true, it’s still a downside worth noting.