Society is now witnessing the implementation of digital currencies, AI and blockchain technology worldwide. These new digital technologies require a high consumption of electric energy, which is currently produced with coal and fossil fuels that adversely impact the environment. A global shift toward green energy will require the removal of the technological, infrastructural, regulatory and tax policy barriers. In a series, my articles evaluate the tax, digital technology and solar policies (including space power satellites) of the top-CO2-emitting countries.

For the last three decades, China has been on an economic and technological growth path unequalled in size and duration in human history. Its government is playing an active role in shaping the global digital economy, serving as one of its biggest backers and building a world-class infrastructure to support digitization by acting as an investor, green-developer and consumer.

China’s leadership role in the digital payment area comes as no surprise and includes establishing the world’s first blockchain-based central bank issued digital currency — a stablecoin and mobile payment system called DCEP. After all, China pioneered the issuance of paper money during the Tang Dynasty (A.D. 618–907), which finally caught on in Europe and the United States during the 17th century, and still remains at the foundation of the modern economy.

The chairman of the China International Economic Exchange Center, Huang Qifan, explained that the organization has been working on DCEP for five to six years now, and he is fully confident it can be introduced within the next few months by the People’s Bank of China to seven institutions:

DCEP will eventually be available to the general public in 2020.

The DCEP’s partial blockchain-based design will provide the PBoC with unprecedented oversight over money flows, giving them a degree of control over the Chinese economy that most central banks do not have. DCEP will be pegged 1:1 to the Chinese yuan, with the overall objective that it will eventually become a dominant global currency like the United States dollar.

It will not be possible to mine or stake on the DCEP network.

Despite concerns from G-7 and G-20 regulators, Tether recently launched an offshore yuan-pegged stablecoin dubbed CNHT after launching a stablecoin pegged to the U.S. dollar, which is blamed for causing the world’s largest cryptocurrency bubble during 2017 by several class action attorneys in the U.S. who are suing the company for trillions of dollars in damages. Steven Mnuchin, secretary of the U.S. Treasury, supports the launch of stablecoins, including Facebook’s Libra — as long as U.S. financial regulations are followed. EU finance ministers, on the other hand, banned the launch of stablecoins in the region until the bloc has a common approach to regulation, since the EU parliament acknowledged in its latest report on “Financial crimes, tax evasion and tax avoidance” that cross-border cryptocurrency transactions remained a very high risk in terms of money laundering, financing of terrorism and tax evasion in the EU.

Users all over the world are able to earn stablecoins by mining.

Recently, Chinese President Xi Jinping passed a cryptography law and called on his country’s tech community to accelerate efforts in blockchain adoption. So far, China dominates in global blockchain patents, and according to a study conducted by the Central Committee of the Political Bureau of the Communist Party of China, there are over 700 blockchain companies in China. But according to the PBoC, the number of Chinese black market blockchain companies are about 40 times higher — at 28,000 — with 25,000 of these companies issuing their own crypto assets valued at over 110 billion yuan ($15 billion).

In its latest report, CipherTrace estimated crypto crime activity at $4.4 billion for the first nine months of the year, noting that it had risen 150% compared to a year earlier. According to the global monetary watchdog, the Financial Action Task Force, this sharp increase is due to criminals constantly developing new and more sophisticated methods to obfuscate the flow of illicit funds via blockchain-based mobile devices.

Crypto assets can be earned by mining, even on cell phones

For better or worse, mobile blockchain payment technology adoption seems unstoppable. Huawei — currently the only company in the world that can offer the fifth generation of cellular network technology, or 5G — has boldly implemented the world’s first channel coding scheme (polar codes), pioneered by professor Dr. Erdal Arikan, and is collaborating with the PBoC on mobile blockchain payment projects.

China Telecom is actively developing blockchain-enabled 5G SIM cards to become one of the world’s leading platforms for mobile-based crypto asset transactions. At the end of October, 5G services were launched in more than 50 Chinese cities, creating one of the world’s largest 5G networks, with as many as 110 million 5G users.

China’s Belt and Road Initiative (BRI), a massive free-trade plan involving over 130 other countries across Asia, Europe, Africa, and South America, is creating the Digital Silk Road of the 21st century and transforming China into a cyber-superpower. Chinese tech behemoths Alibaba and Tencent have already led the way in cross-border mobile digital payments by driving the shift away from cash, and now collectively control 90% of the $17 trillion mobile payments market, sharing a combined 1.5 billion users between them. Traders of the Digital Silk Road are sending cross-border payments from Hong Kong to the Philippines in mere seconds using blockchain-based, mobile digital wallets from Alipay and WeChat Pay. 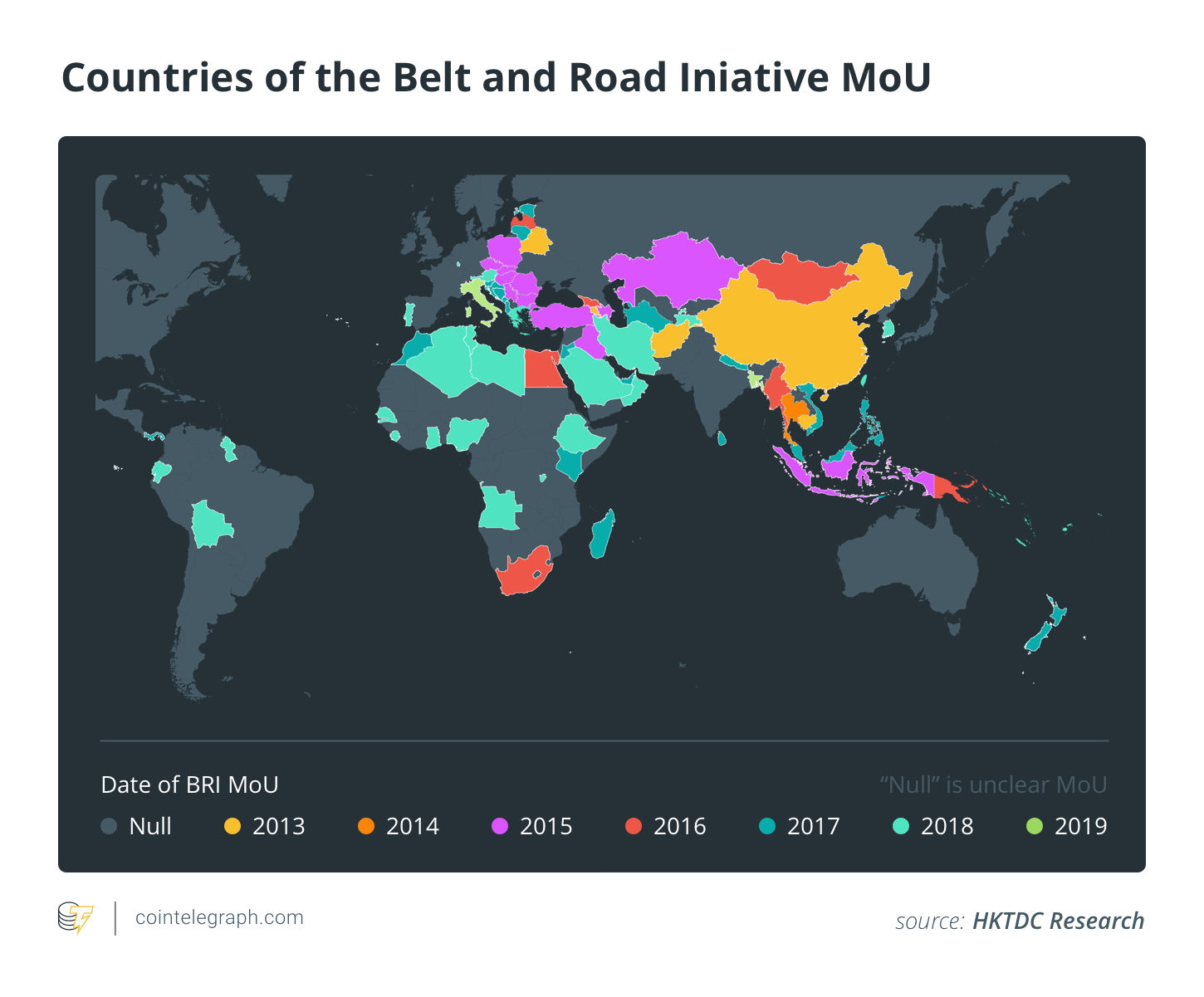 Inspired by its new focus on blockchain, China is committed to maintaining its world-leading position in cryptocurrency mining and keeping its massive mining farms in business. The specialized processors used for mining crypto (the world’s supply of which is largely provided by China) consume large amounts of electricity, mostly fueled by coal — a resource that has been fundamental to China’s unparalleled economic growth. China burns about half of the coal used globally each year. Between 2000 and 2018, its annual carbon emissions nearly tripled, now accounting for about 30% of the world’s total. China emerged as the world’s top CO2 polluter starting in 2017, when cryptocurrencies experienced an unprecedented global bubble, and continues to maintain this ranking to date.

China currently accounts for roughly 60% of the global Bitcoin hashrate, down from a previously estimated high of 90% in 2017. In a private email, Tsou Yung Chen, Global CEO of RRMine — a cloud mining company — explained, “Our platform doesn’t own data centers, we are a Hashrate service provider. We cooperate with global data centers, convert Hashrate into liquid asset and provide it to investors. Most of our cooperative data centers are in Southwest China, which has abundant hydropower for cryptocurrency mining.”

Inner Mongolia is home to the world’s largest “Ordos” solar power plant, together with Xinjiang and Sichuan, constitute the big three Bitcoin mining bases in China. All three provinces also have the worst air quality. Susanne Köhler and Massimo Pizzol at Aalborg University in Denmark found that coal-heavy Inner Mongolia accounted for 12.3% of Bitcoin mining, but resulted in more than a quarter of the total country’s CO2 emissions, which has only increased since countries signed on to the Paris agreement.

Liu Cixin, the celebrated Chinese science fiction writer, has advocated for “abolishing crude technologies such as fossil fuels and nuclear energy and keeping gentler technologies such as solar power and small-scale hydroelectric power.” During the past 25 years, China went from having virtually no solar panels to leading the world by a margin of more than 100%. The country surpassed Germany to become the world’s largest producer of photovoltaic power based on its 2011 five-year plan for energy production in 2015, became the first country to surpass the 100 GW of installed capacity in 2017. Estimates see China’s photovoltaic panel installations hitting a cumulative total of 370 GWdc by 2024 — more than double the projected capacity for the U.S.

During the past 10 years, China has also ranked number one in terms of the sums invested in renewable energy capacity by committing $758 billion between 2010 and the first half of 2019, with Chinese companies emerging as technology leaders in green transport and energy as well as digital infrastructure. Currently, China accounts for around 24% of global investment in renewables, with solar and wind capacity in BRI countries surging from 0.45 GW to 12.6 GW between 2014 and 2019 as a result.

According to an Energy Transitions Commission report, it is technically and economically feasible for China to become a fully decarbonized and green-developed economy by reaching a net-zero carbon emissions by mid-century, with solar energy comprising 44% of all renewable capacity additions until 2040, according to the International Energy Agency’s World Energy Outlook report. Subsidy-free solar projects can be built not only in most Chinese cities — and at a significantly cheaper price than coal, hydropower, nuclear and other grid-fed generation-sources — but also in the nations covered by the BRI.

The reality is, wind and solar only accounted for 5.2% and 2.5%, respectively, of China’s national power generation in 2018, and during May, the Chinese National Energy Administration announced that it would stop providing subsidies for onshore renewable energy projects, which must now compete directly at auction with other forms of power generation. Solar energy also competes with the thick, gray air pollution that dims Chinese sunlight by about 13%. Renewable energy investment in China already dropped by 39% in the first half of 2019 compared to a year earlier, and starting Jan. 1, 2020, the pricing of electricity underwent a seismic change that may impact the competitiveness of renewable energy pricing in favor of coal.

Related: Green Policy and Crypto Energy Consumption in the EU

China is very serious about the idea of building renewable-energy projects in space to beam the sun’s energy back to Earth, fundamentally reshaping the way grids receive electricity. If scientists can overcome the formidable technical and economical challenges involved, SPS projects could represent a monumental leap in combating China’s addiction to coal power sources, which worsen air pollution and global warming.  Pang Zhihao, a researcher from the China Academy of Space Technology Corporation, described SPS as an “inexhaustible source of clean energy for humans.”

The China National Space Agency has been collaborating with India Space Research Organization in fields such as lunar and deep space exploration. On Jan. 2, 2019, China made a historic first landing on the far side of the moon. The milestone marked a turning point for China’s space exploration and may factor into China’s SPS ambitions.

According to an IMF report, China ranks number one in subsidies to the hydrocarbon industry, at $1.4 trillion, and is world-third in terms of total coal reserves behind the U.S. and Russia. Fossil subsidies are used as a tool to influence the energy mix and energy prices in both China and at coal-fueled electricity plants across the BRI countries it heavily lends to and invests in.

It is undeniable that China is once again taking the lead, this time by providing the world with a new blockchain-based mobile payment system, with the steep energy requirements that come with this new payment system being electrified by coal. Taking a proactive stance on the matter, Ziheng Zhou, partner and chief scientist at blockchain company VeChain, explained:

“We recognize that traditional carbon reduction is mainly driven by administrative orders. To counter this, we rolled out a market oriented Digital Carbon Ecosystem (DCE), the world’s first blockchain-based program that incentivizes people for protecting the environment.”

Only time will tell whether VeChain’s blockchain-based, market-oriented approach will end up contributing to environmental protection and reversing the effects of climate change as China takes the global lead in the wake of U.S. President Trump’s administration formally beginning the year-long process of pulling out of the Paris Agreement. In the interim, the failure of free markets to consider environmental costs and damages is being addressed by climate change-based class-action lawsuits against governments and corporations — originally a uniquely American undertaking and historically prohibited in most other countries — have ramped up and spread across 28 countries, including China, where public interest claims for such damages have seen some success.

Selva Ozelli, Esq., CPA is an international tax attorney and CPA who frequently writes about tax, legal and accounting issues for Tax Notes, Bloomberg BNA, other publications and the OECD.