Coinbase Repeats Pattern of Shutting Down When Bitcoin Gets Volatile

Members of Crypto Twitter are speculating the busiest exchange in the U.S. may be intentionally crashing its site during volatile times.

On June 1, when Bitcoin rallied from the $9,600s to $10,380 in less than an hour, Coinbase users trying to access their portfolio were met with a message that the site is “temporarily unavailable.” 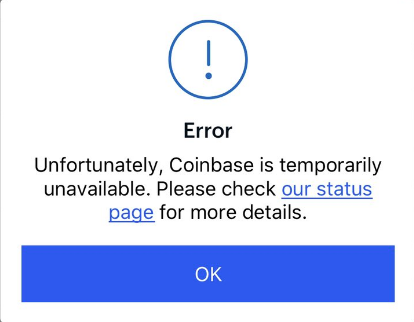 On May 9, two days prior to the anticipated rewards halving, the price of Bitcoin plummeted nearly $2,000 in under 24 hours, likely due to a massive selloff by whales and other investors. On April 29, BTC rose nearly 12% to reach the $8,600s. On both occasions, many Coinbase users once again were unable to trade any digital assets.

Alarmingly, this issue wasn’t resolved even following the crypto bloodbath in mid-March, when some users of the exchange weren’t able to sell off their Bitcoin during the price drop to the $3,000s.

Coinbase down when it’s needed most

Many users of the largest cryptocurrency exchange in the United States have reported being unable to trade during these times of peak Bitcoin volatility.

Unfortunately, huge downturns or price surges are often when traders want to buy and sell the most. Losses can mount when users aren’t able to access their accounts to sell their crypto, and potential profits can simply disappear when they can’t buy anything.

Coinbase’s status page includes updates on current outages, but cites nothing more than “connectivity issues” for June 1, May 9, and April 29, and “network congestion” on March 12.

In the absence of any kind of official statement from CEO Brian Armstrong or other representatives of Coinbase, members of Crypto Twitter have been quick to offer their two cents on the exchange going down at crucial trading times.

Twitter user CryptoWhale posted a chart to his 18,000+ followers on June 1 shortly after the recent outage, speculating that Coinbase had a built-in algorithm to automatically shut it down anytime there was a BTC price movement over $500:

Dan Gambardello from Crypto Capital Venture asked simply, "How does an exchange with an $8 billion valuation crash every time bitcoin pumps 5%?"

Crypto exchanges, even large ones like BitMEX, do have problems with user access during price swings. However, Coinbase seems to be developing a reputation for it among the crypto community. The site itself completely crashed in June 2019, causing the price of Bitcoin to fall $1,400.

Cointelegraph has reached out to Coinbase, but did not receive a response at press time. We will update this article if we hear back from them.