Contrarian View: Why Bitcoin Price May Dump After 2020 Halving

A review of Bitcoin’s long term price action suggests that the 2020 halving event could be a ‘buy the rumor, sell the news’ event.

Bitcoin’s (BTC) upcoming 2020 halving event has already posted numerous anticipatory headlines as the market waits to see how crypto’s flagship asset will react regarding its price. Additionally, speculators have filled Twitter, commenting that Bitcoin should see a jump in price, as has statedly been the case in the past.

In contrast, some of Bitcoin’s charts show that the asset could possibly dump in the days following the halving, although, historically, all-time highs have followed halving events in the long term.

Based on Bitcoin’s programming and mining, the digital asset houses a schedule of halving events (also sometimes referred to as halvenings), set to occur approximately every four years. Bitcoin already has undergone two halvings, occurring in 2012 and 2016.

Bitcoin completes a halving event approximately every four years, decreasing the supply of additional Bitcoin entering the market by 50%, acting as a type of deflationary event. Currently, 12.5 Bitcoin enter the circulating supply approximately every 10 minutes via mining. After the next halving which is expected to occur sometime in May 2020, the number will drop to 6.25 Bitcoin.

One might conclude that the added scarcity of Bitcoin, and its commonly referenced stock-to-flow model, might lead to a rise in price immediately after a halving event occurs. In contrast, however, such an anticipated event might also be subject to a “buy the rumor, sell the news” type of scenario.

Bitcoin’s first halving occurred on Nov. 28, 2012. On the halving date, the digital asset saw a sizeable wick up to $12.76, with the entire day’s price action spanning approximately 6.47%.

Bitcoin’s price remained relatively quiet in the days immediately surrounding its first halving, especially considering the magnitude of the event. Since this was Bitcoin’s early days, however, it is possible that the digital asset’s lack of media attention (compared to today’s coverage) and the smaller number of people involved in the crypto space at the time, led to the event having a less speculative effect.

Historical price data is limited, but according to the data available on Bitcoin’s BNC Liquid Index,  the digital asset hit an all-time price high of approximately $32 on June 8, 2011. Bitcoin did not decisively break through the $32 level until Feb. 28, 2013, several months after its first halving.

After breaking its all-time high in Feb. 2013, Bitcoin continued its surge to a height of $260.50 before falling into a bear market period for multiple months.

The digital asset also saw a noticeable price increase followed by a retracement during the weeks leading up to its second halving. The days after Bitcoin’s second halving remained fairly calm until a sizeable tumble took the asset down to $466.20 on Aug. 2, 2016.

In the weeks following, Bticoin did not close a daily candle above its July 9 halving day high until Oct. 27, 2016. 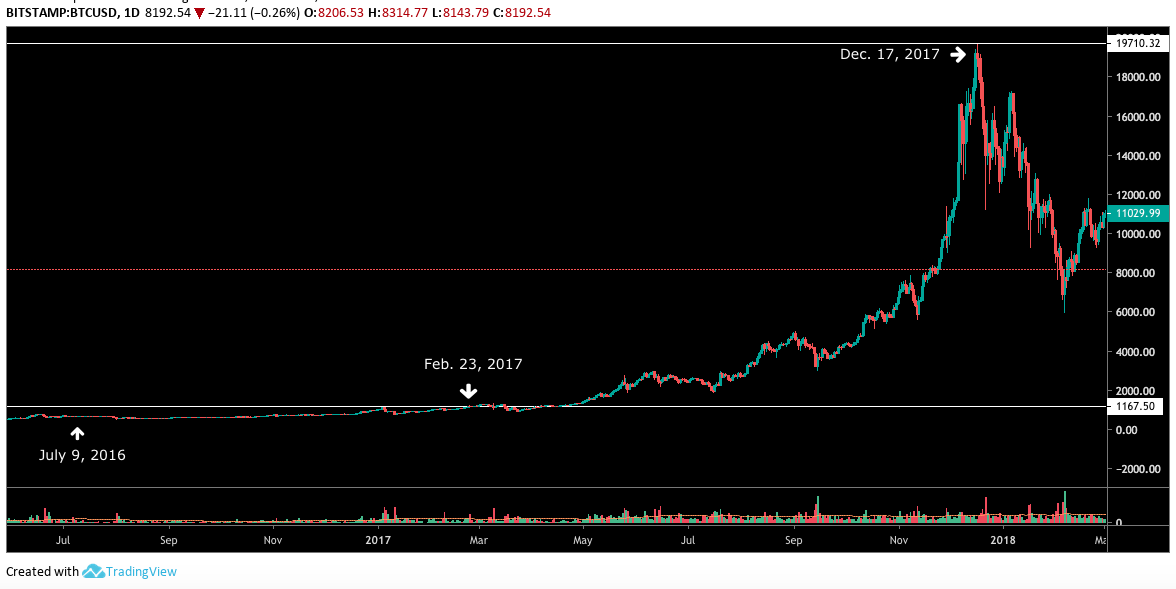 Bitcoin’s 2016 halving ultimately took its price from $664 to almost $20,000, although the charts also included some bearish and sideways price action in that time period.

At present, various media, crypto-Twitter and other involved parties continue to frequently mention Bitcoin’s 2020 halving. The majority infers that the asset will rise significantly either before or after the halving and this assumption is  based on analysis of previous halvings.

This hype and anticipation could be the perfect storm of circumstances to create a “buy the rumor, sell the news” type of situation, at least in the short term.

Essentially, in many markets, a highly anticipated event will often spike the price of related assets in the days leading up to that event. Once the event occurs, the prices for those assets often drop notably.

This type of market behavior has occurred numerous times in the crypto space, perhaps most sizeably around the Bitcoin futures trading launches for the Chicago Mercantile Exchange (CME) and the Chicago Board Options Exchange (CBOE). In the days leading up to those events, Bitcoin rose from $6,400 on the day of CME’s news announcement, to the digital asset’s most recent all-time high near $20,000. Bitcoin’s price fell significantly in the days and weeks following those launches.

The data on the charts is mixed regarding the immediate price reaction. Bitcoin’s 2012 halving did not show much downward or sideways action after the halving, while 2016 posted months of downward and sideways price activity.

Additionally, 2016 saw Bitcoin’s price pump and retrace prior to its halving, while 2012’s halving saw general volatility in the weeks prior to the event, followed by a gradual increase in price leading up to the halving event.

The data does, however, conclusively show that both halvings led to bitcoin’s price rising in the long term, leading to the coin breaking all-time highs.