Crypto and Blockchain — Following in the Footsteps of Man’s Greatest Inventions?

From the printing press to electricity, radio and the internet — here’s how cryptocurrency and blockchain stacks up to some of the most influential technologies of the modern age.

Throughout history, human civilization has gone through massive growth periods, thanks to major technological advances.

The earliest — and perhaps most notable — was the discovery and mastery of fire, which is estimated to have happened around 700,000 years ago. The American Council of Science and Health cites archaeological evidence for these figures.

Fire provided the impetus for Homo Sapiens to evolve, creating ‘revolutionary’ changes for early man, which may have led to the establishment of bigger settlements and the development of more intricate tools and a better quality of life.This very distant discovery marks the start of man’s intellectual development.

While the list of technological discoveries that have changed history are numerous, let’s narrow down our list to five of the biggest innovations in communications technology that have changed the way people access and consume information and data.

For a more comprehensive list of man’s greatest inventions, The Atlantic has put together a fantastic catalogue compiled and ranked by some of the world’s most notable historians, scientists, engineers and entrepreneurs. 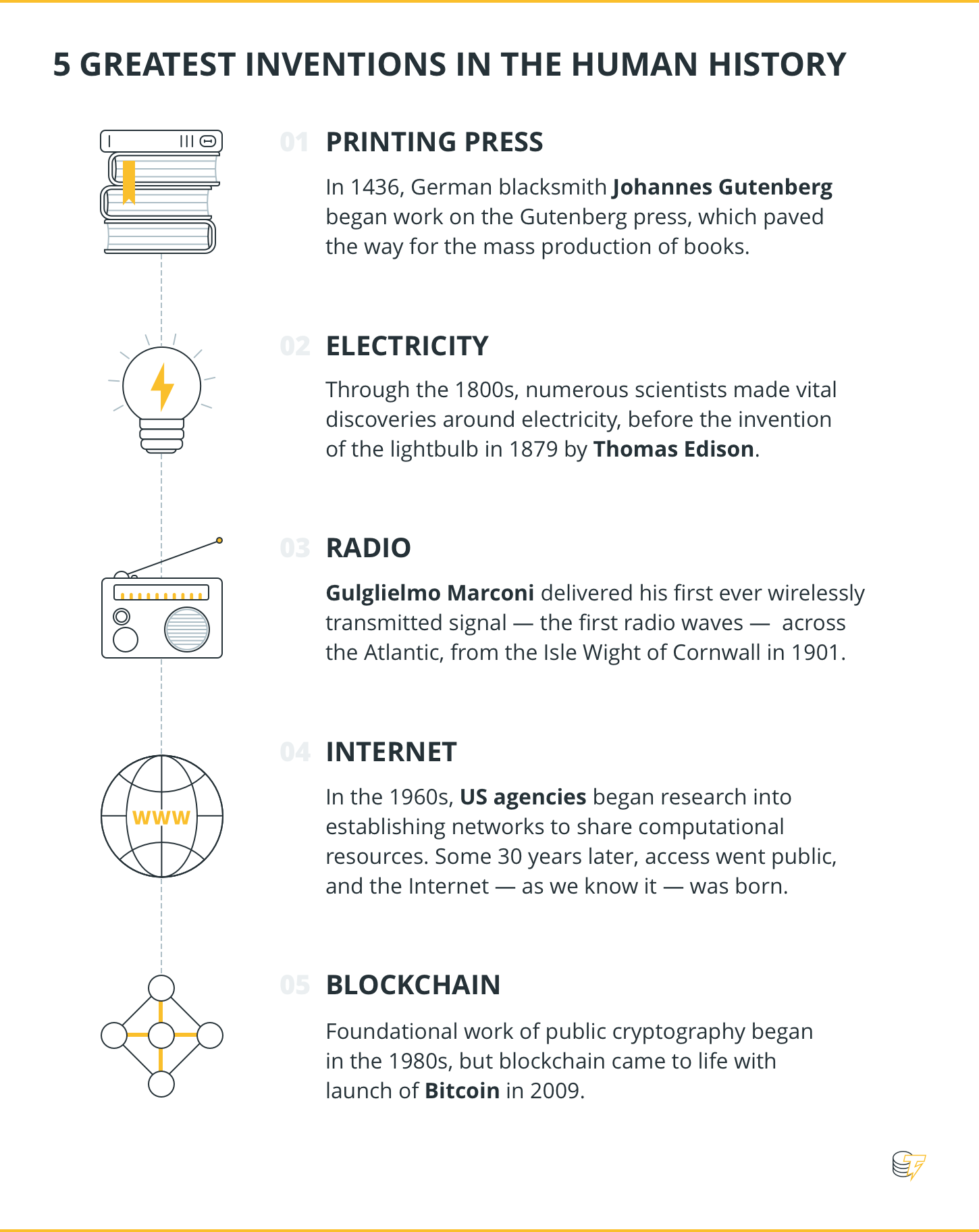 Hailed as one of the most important inventions in history, the printing press precedes the rest of our list by almost 400 years. Johannes Gutenberg is credited with the creation of what is known as the Gutenberg press.

The German, who was a goldsmith by trade, created a hand-held metal matrice that essentially created the first type-based printing press system.

It allowed the rapid and cheap printing of documents and books in short print runs. As the printing press spread around the world, more and more people had access to information — which led to an intellectual revolution and played a big role in the Reformation.

This ability to spread information had marked influences on the scientific revolution and the rise of adult literacy. It also, ironically, led to the decline of Latin and the development of vernacular languages around the globe.

The printing press literally fast-tracked the ability to create and share information around the world, and played a big role in the development of education on a grand scale.

While the printing press allowed the spread of information and knowledge around the world, people were still in the dark, per se.

That would eventually come to an end in the late 1800s, as a number of scientists came to grips with the intricacies of electricity. The invention of the light bulb, which had numerous contributors throughout the 19th century, brought lighting to the world as one of the first widely used applications of electricity.

One of its applications was developed earlier and had an even bigger role to play in communications. The electric telegraph was developed in the 1830s, which allowed people to send messages across the world with the use of an electric circuit.

This laid the platform for communication systems likes telephones, fax machines and, eventually, the internet.

The next step in the development of communication was the emergence of radio. At the turn of the 19th century, a certain Guglielmo Marconi patented the idea of a wireless telegraphy system in England in 1896.

Marconi delivered his first ever wirelessly transmitted signal — the first radio waves — across the Atlantic, from the Isle Wight of Cornwall in 1901.

For the next 20 years, radio communication was mainly used by the military. But from the 1920s onward, commercial radio was launched. The likes of the BBC started broadcasting in 1922 — providing people with news, information and entertainment.

Radio then played an important role in bringing news to the people during World War II — and then changed its focus to music and entertainment after those chaotic days. Commercialization changed the nature of radio, but it still plays an important part in keeping people informed of major events around the world.

Radio’s success lies in its wireless nature. Anyone with a receiver can tune in to a frequency that is in range to access messages and information. This also means that many people can benefit from a single receiver — making it one of the most powerful mediums for the exchange of information.

While radio and television slowly gained adoption around the world from the 1920s onward, it would take a good 70 years — until the 1990s — before the internet would be accessible to the wider public.

Its origins began in the 1960s, where psychologist and computer scientist Dr J.C.R. Licklider produced a series of documents that outlined the idea of an ‘Intergalactic Computer Network’ —  which would allow a network of globally connected computers to access and share data, as well as use programs from a number of sites.

In 1963, while serving as the director of the U.S. Department of Defense’ Advanced Research Projects Agency (known as DARPA), Licklider laid the foundation for the development of ARPANET.

Building on the concept of time-sharing, which was the sharing of computational resources to multiple users, the internet’s development was mainly driven by the use of packet switching as a means to transmit information over these early, closed networks.

From the 1980s onward, the internet as we know it began to become commercialized, as businesses looked to embrace and make use of the capabilities of a global network. This saw the emergence of internet service providers.

At the turn of the 1990s, the public had access to email services and basic web pages, and the next ten years saw an explosion of growth, which was characterized by the dot com bubble.

Nevertheless, the internet’s use has all but encompased all of the technologies listed above. Through a network of global computers and servers, people around the world have access to an almost infinite supply of information.

Furthermore, the internet now provides the platform for video and audio, which has shaken up the world of radio and television. Its applications are numerous — and the internet has reshaped the modern world.

It is also, in part, responsible for the infrastructure that blockchain technology and cryptocurrencies are built upon.

The internet is now the road that links global networks together, empowering hundreds of millions of people to be able to access information and communicate with each other around the world.

As the digital world continued to evolve after the internet became widely accessible to the masses, newer technologies were developed using its infrastructure.

With the ability to communicate and share data with users around the world via the World Wide Web, privacy and safety also became an issue.

This is where the foundations of cryptocurrency came into being — through the development of encryption technology.

The development of cryptocurrencies finds its origins in the 1980s, where ‘cypherpunks’ pre-empted threats against privacy. As software developer Jameson Lopp said in November 2017, these cypherpunks were responsible for the foundation of blockchain technology and cryptocurrency:

“The origin of the cypherpunk goes back to the 1980s. A bunch of nerds who saw the promise of the internet and these new communication technologies, but they also saw the dark side.”

“They wanted to bring privacy-enhancing technologies into the internet itself, on top of the internet protocols and it just so happens that digital money was one of those interesting things the cypherpunks thought was important for society to have. A number of cypherpunks worked on it for decades and it wasn’t until 2009 that Satoshi came along with an elegant solution.”

Encryption technology was pioneered, once again, by governmental and military agencies in the 1960s, while the origin of encryption dates back way further. Nevertheless, once digital data-encryption was developed, it was released to the public in the late 1980s, and during 1990s, the cypherpunk movement was officially formed by Eric Hughes, Tim May and John Gilmore.

With access to previously classified technology, these technologists were able to continue the work being done on data privacy. This encryption technology then became a vital part of the Bitcoin protocol.

Satoshi Nakamoto’s Bitcoin white paper even credits the work of Dr. Adam Back and his Hashcash proof-of-work — which is an algorithm that can be used to safeguard against denial-of-service attacks.

The work of b-money creator Wei Dai, computer scientist Ralph Merkle — who invented cryptographic hashing — and a number of other scientists that have worked on digital time-stamping technology, all contributed to the eventual creation of Bitcoin.

Bitcoin was birthed in 2009, on that fateful day of January 4, when the genesis block was mined. While its uptake was slow in the first few years, things have changed dramatically since.

2017 was arguably the breakout year for Bitcoin and cryptocurrencies in general. A spiralling bull run saw the pre-eminent cryptocurrency break past the $20,000 mark.

This cast a spotlight on Bitcoin and cryptocurrencies in general, and they’re no longer an obscure technology that nerds talk about on lunch break in Silicon Valley.

Bitcoin and its blockchain still rule the roost, while the likes of Ethereum have brought a new dimension to the applications and possibilities of blockchain technology.

Like the early years of electricity, radio and the internet, the uses of this technology are still being figured out. But as more people come to grips with the possibilities of cryptocurrencies and blockchain technology, the faster adoption occurs.

While the crypto space is constantly evolving, with a number of big movers having entered the scene in the past few years, blockchain technology is being harnessed by private companies around the world as well.

Ironically, this is where blockchain technology differs from the predecessors mentioned above. Radio and internet technology was developed and harnessed by government and military operations first.

Bitcoin, on the other hand, was released to the public in 2009, and since then it has been adopted by millions around the world and has birthed numerous blockchain projects — both public and private.

The applications of blockchain technology are still being explored and the sky's the limit in terms of the effect it could have on society.