A prominent analyst believes Tether issuance and market cap are pretty good indicators of where Bitcoin price is headed.

Bitcoin price charting on a longer timeframe, market structure and the issuance of 1 billion Tether so far this year are making crypto and equities analyst FilbFilb incredibly bullish on BTC/USD in the run up to the 2020 halving.

The first took the bearish perspective and predicted a pullback to $8,500-$7,500, often citing the CME gap.

The second envisioned a lengthy period of consolidation where Bitcoin price would remain pinned between $9,000 and $12,000, providing the opportunity for savvy traders and institutional investors to accumulate prior to the 2020 halving.

The third group interpreted the parabolic breakdown as nothing more than a blip and remain steadfast in their belief that the digital asset will eventually rally back to $13,500 and higher.

According to popular crypto and equities analyst FilbFilb, Bitcoin price has undergone a structural shift for several reasons, he explained in his weekly newsletter.

A break above $14,000 also represents a new 2019 all-time high and the news event surrounding this event could lead to an influx of capital from investors of various ilk.

In combination, these factors make a strong bullish case for Bitcoin price in the run up to the May 2020 halving.

However, FilbFilb also cautions that:

“On lower time frames, the Adam and Eve target remains to play out, with $12.9k being the target.”

As discussed previously, there is a noticeable lag between Tether issuance and Bitcoin’s corresponding price action.

By starting at Tether’s market cap bottom and comparing this against the time it took Bitcoin to reach its 2018 bottom, FilbFilb’s notes that there is an approximately 32-day delay between Tether and Bitcoin’s price action.

Therefore, when applied to Tether’s current market cap of $4.34 billion, the model suggests that the price of Bitcoin should be somewhere around $20,000.

Admittedly, there are a few caveats which the analyst sufficiently addresses:

Ultimately, what is worth noting is that there is a statistically significant correlation between Bitcoin price and Tether’s market cap. 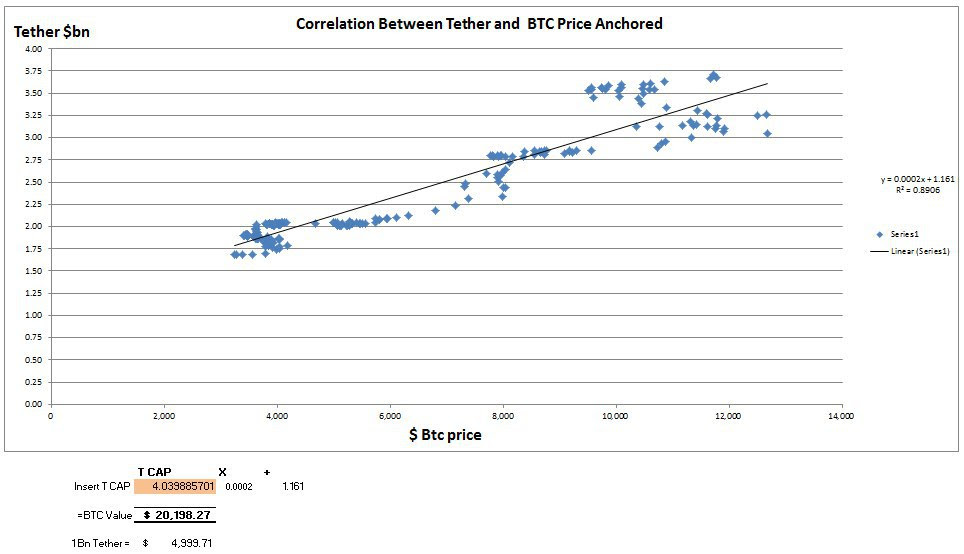 Thus, one can infer that Bitcon’s price could be correcting upwards from its current value of $11,500 given the market cap of Tether and the 1 billion in USDT issuances this year.

But while FilbFilb cautions that he is not comfortable making prediction of a $20,000 Bitcoin price today, he is confident that:

“There’s statistical evidence to suggest that there are enough Tethers in issuance to make a directional move towards it, should they get deployed in that way.”

Macro-economic factors support the case for a bullish Bitcoin

As previously reported by Cointelegraph, a series of worsening macro-economic factors are presenting challenges for traditional markets. But these issues also appear to be supporting Bitcoin’s allure as a store-of-value investment and hedge against market volatility within traditional markets.

“The relative size of Bitcoin’s market value compared to the investible gold market, for example, makes it a tempting opportunity for investors starving for assets with above-average growth potential as well,” the researchers note.

Therefore, it’s no surprise that investors may be increasingly turning to Bitcoin — and Tether as an easy way to access this digital gold — in the coming months as storm clouds continue to gather over the global economy.