A comparative analysis of indices and cryptocurrencies movement.

The cryptocurrency  market data is provided by the HitBTC exchange.

The Hang Seng has been on a tear, up seven weeks in a row and closing at a new record high for the second week in a row. Meanwhile, the S&P 500 continues its ascent into a new record high and closes strong, at the high of the week, while the BSE 30 Sensex, does the same. The Sensex finished its eighth week up in a row.

It’s interesting to note that the order the equity markets lined up last week is similar to the relative performance year-to-date. This seems to be a good reminder of the importance of trends and the significance of relative performance. A trend, once set in motion, tends to continue for a while, and the relative position of markets have a tendency to be maintained over some period of time.

Let’s now take a look at a few of the charts that may have something to tell us. We’ll leave the Hang Seng, S&P 500, and Sensex alone since they are in clear and strong uptrends into record highs.

First, we look at the Nikkei 225 Index, which can best be observed with the weekly chart. For the past few weeks, the index has been stalled around the 150 percent extension, 150 percent retracement, of the prior downtrend that started from the 2015 peak, and the top parallel trend channel line. Last week it again attempted to continue its rally with a brief new high of 24,129.34. The attempt was quickly reversed with a close near the low for the week. That’s the third consecutive week that the Nikkei ended in the red and reflects the building of selling pressure. Also note that two weeks ago there was a bearish doji candle, not perfect but close enough. Further, the Stochastics momentum oscillator has turned down after being overbought for most of the rally coming off the August lows.

A break below the three-week low of 23,577.07 increases the chance for further selling, with a daily close below confirming a bearish signal. 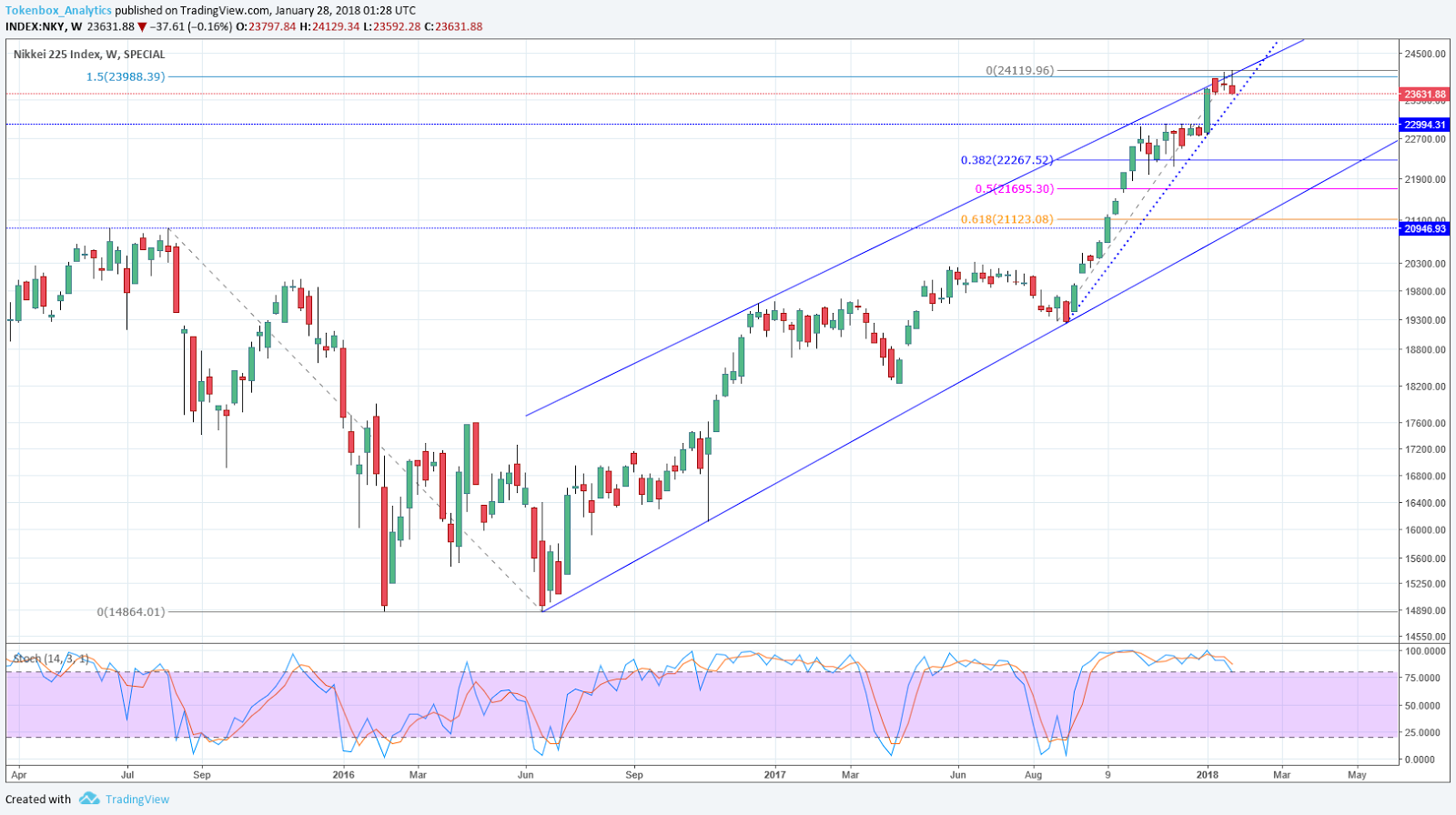 This next chart is a daily chart for the FTSE 100. The FTSE found resistance at 7,792.60 two weeks ago and has since pulled back. This follows a decisive breakout of a six-month basing period that took the form of a bullish ascending triangle consolidation pattern. When markets break through resistance at some point they pullback to test prior resistance as support, at least to some degree. We see that happening now with the FTSE. Note that prior resistance at the top of the triangle at 7,599 is almost an exact match with the 38.2 percent Fibonacci retracement of the most recent upswing. In addition, Stochastics has turned up from being well oversold. This makes the 38.2 percent Fibonacci price support zone a good place to start to look for potential entries, relative to your own strategy. Either way, the overall behavior of this index is bullish and the uptrend can be expected to continue following the retracement.

Ethereum is the only crypto with a positive performance for last week and year-to-date, and it has done so by a long shot. Year-to-date ETH is up 42.1 percent, and it was 1.4 percent higher last week. Nevertheless, overall the cryptocurrency market remains in a consolidation phase with lower volatility and therefore less predictable price patterns. What’s happened is that ETH had been lagging the other cryptocurrencies on the way up and therefore they topped and began to correct earlier. Most have not recovered much after hitting recent lows. The cryptocurrency, on the other hand, pulled back, found support and quickly recovered, and it has maintained its recovery. The other cryptos continue to face downward pressure.

What this all means is that Ethereum can now be watched as a possible leading indicator for the crypto market. A sign of strength should help maintain or improve bullish sentiment in the crypto market, while signs of weakness could trigger declines below support.

Here is a four-hour chart for Ethereum (ETH/USD): ETH has been forming a potential rising measured move following a greater than 45 percent retracement off the peak at 1,424.30 on Jan. 13. The advance off that low found resistance around the 61.8 percent Fibonacci retracement and the subsequent decline found support also at the 61.8 percent level. This sets the stage for a potential Gartley completion around the 1,295.21 price area at the earliest. The potential resistance zone happens to coincide with two other Fibonacci resistance levels as noted on the above chart.

Nevertheless, a breakout above the prior 1,160 swing high triggers a bullish trend continuation, and this may provide some upside enthusiasm, even though short-term, to the wider crypto market.

Several of the other cryptocurrencies have been forming symmetrical triangle patterns on their four-hour charts, including BTC/USD, DASH/USD and IOTA/USD. A breakout of the triangle consolidation patterns will point to the next direction of momentum.

Let’s now take a look at Ripple (XRP/USD). Ripple is the weakest performer year-to-date, down 38.5 percent, and for the week it declined 21.4 percent. Since hitting a 3.34 peak on Jan. 4, Ripple fell as much as 74 percent before finding support at 0.85. That low completed a 78.6 percent Fibonacci retracement of the near-term uptrend, and it was followed by a 61.8 percent retracement of the internal downtrend.

What’s interesting about its chart is the relationship of price to the downtrend lines. There are a couple of clear trend lines that define dynamic resistance of the downtrend.  A decisive breakout above the line will provide a bullish signal with strength confirmed on a move above the minor swing high of 1.457, and then again on a rally above the next higher swing high at 1.722. Fibonacci price levels are listed for use as potential short-term targets. The charts for the cryptocurrency analysis are provided by TradingView.