Fintech ‘As a Bridge Out of Poverty' to Fight Financial Exclusion

Beyond the business opportunities, financial innovations have a larger socio-economic role to play and could help pull billions of people out of poverty, according to a new report.

Beyond the business opportunities, financial innovations have a larger socio-economic role to play and could help pull billions of people out of poverty, according to a new report.

Both corporate and VC firms have put their bets on the burgeoning fintech industry, which seeks to reinvent the way people bank and transact, all thanks to technological innovation. The growing interest in financial technologies has led investors to pour billions into the space. And the amount is not expected to decrease any time soon, according to a recent report from Accenture.

The attractiveness of fintechs can be explained by many factors, among which are changing consumer behavior and the accelerating adoption pace of innovative technology.

A report from Goldman Sachs, one of the largest corporate investors in the industry, revealed that 33% of millennials, the generation born between 1980 and 2000, said they won't need a bank in 5 years, a finding that should mark the death of retail bank branches. According to Peter Diamandis, executive chairman and co-founder of Singularity University:

"Finance will be the most disrupted industry in the next 10 years. Bank branches will most be gone [...] this decade."

Additionally, estimations from PHD Ventures, found that at least 66% of the global population will be online by 2020, meaning an addition of 3 billion global consumers.

"That's 3 to 5 billion new customers not accounted for in the global economy today entering it. I don't know why financial services companies don't get it," Diamandis said at the Exponential Finance conference on June 2.

But the fintech industry extends much beyond the banking sector. These startups, which often focus on one specific niche, are literally attacking every product and service line typically offered by banks and financial institutions, from payments, stock and trading platforms, to lending - and the list goes on. By integrating technology, they aim to provide cheaper and more efficient products.

Apart from the business opportunity, however, innovation in finance is believed to have a wider socio-economic implication and has been argued by many to be a solution to financial exclusion.

According to the Global Findex, a tool created by the World Bank to track the progress of financial inclusion, between 2011 and 2014, the number of unbanked individuals dropped 20% to 2 billion adults, a significant process that has been witnessed across all parts of the world.

According to Jim Yong Kim, president at the World Bank Group:

"Access to financial services can serve as a bridge out of poverty. We have set a hugely ambitious goal – universal financial access by 2020 – and now we have evidence that we’re making major progress.

"This effort will require many partners – credit card companies, banks, microcredit institutions, the United Nations, foundations, and community leaders. But we can do it, and the payoff will be millions of people lifted out of poverty."

Between 2011 and 2014, the percentage of adults with a bank account increased from 51% to 62%, a trend driven by a 13% point rise in account ownership in developing countries and the role of technology. 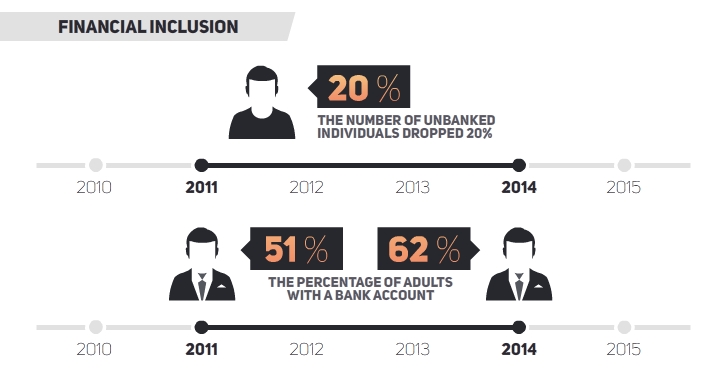 In particular, mobile money accounts in Sub-Saharan Africa are helping to rapidly expand and scale up access to financial services.

Anne-Marie Chidzero is a consultant at FinMark Trust and the CEO of AfriCap Microfinance Investment Company. Her company has made several investments into tech companies, with a particular focus on mobile banking platforms.

"Mobile banking is promising due to the low population density in Africa and the low costs and high penetration of cellular service on the continent," she said in an interview for the Center for Financial Inclusion.

According to Robert Annibale, global director of inclusive finance at Citi, the rapid expansion of global connectivity, combined with the high adoption rate of mobile phones in developing countries, provide an opportunity for businesses to help make significant progress in financial and technological inclusion.

6 areas where fintechs can make a difference

Financial inclusion, which consists in delivering affordable financial services to disadvantages and low-income groups, has significantly increased during the past few years, but still faces challenges, Annibale argued.

In a post published on June 6, the executive lists 6 areas where fintechs can make a difference for underserved populations:

Distribution channels: "Solutions that move small business owners away from cash and onto mobile payments, points-of-sale and other logistics systems," which would allow entrepreneurs to track more accurately the flow of money and help them connect with large players, including corporations and governments.

Financial capability: Introducing safe and accessible financial products can "empower individuals with the knowledge, skills and behaviors to manage their finances, save for the future and build a healthy financial identity," he argues.

Micro-enterprise access: Accessibility to safe and affordable credit is "a key factor for small businesses in developing countries," said Annibale. "There is broad demand for scalable, accessible solutions for supply-chain financing, micro-lending and other services that enable small business owners to weather income fluctuations, buy equipment or inventory, create jobs and thrive."

"An innovative technology can only succeed if it is well embedded into the financial ecosystem, with the right business model and the right incentives for stakeholders."