The International Monetary Fund has argued that network effects could spark the blaze for the mass adoption of new digital money.

The International Monetary Fund (IMF) has argued that network effects could spark the blaze for the mass adoption of new digital money.

In a fresh report published on July 15, the IMF aims to create a conceptual framework for categorizing new digital money such as Facebook’s Libra and stablecoins as well to think through the implications of their emergence for central bank policy.

In its analysis of e-money— including but not limited to blockchain-based assets — the IMF identifies six factors that could drive their rapid growth for payments: convenience, ubiquity, complementarity, low transaction costs, trust and network effects. The report states:

“The first five reasons may be the spark that lights the fire of e-money; the sixth is the wind that could spread the blaze. The power of network effects to spread the adoption of new services should not be underestimated.”

To bolster its claims, the IMF points to the rapid switch from email to SMS and from SMS to social messaging platforms such as Whatsapp, noting that adoption of the latter was exponentially faster than the initial switch to email — noting that its 1.5 billion user base is attributable more to word of mouth than to formal marketing strategies.

The IMF also creates a taxonomy indicating its view of the thriving digital money sector, notably adopting the blockchain industry’s cornerstone principle of decentralization as one of its principle classificatory parameters: 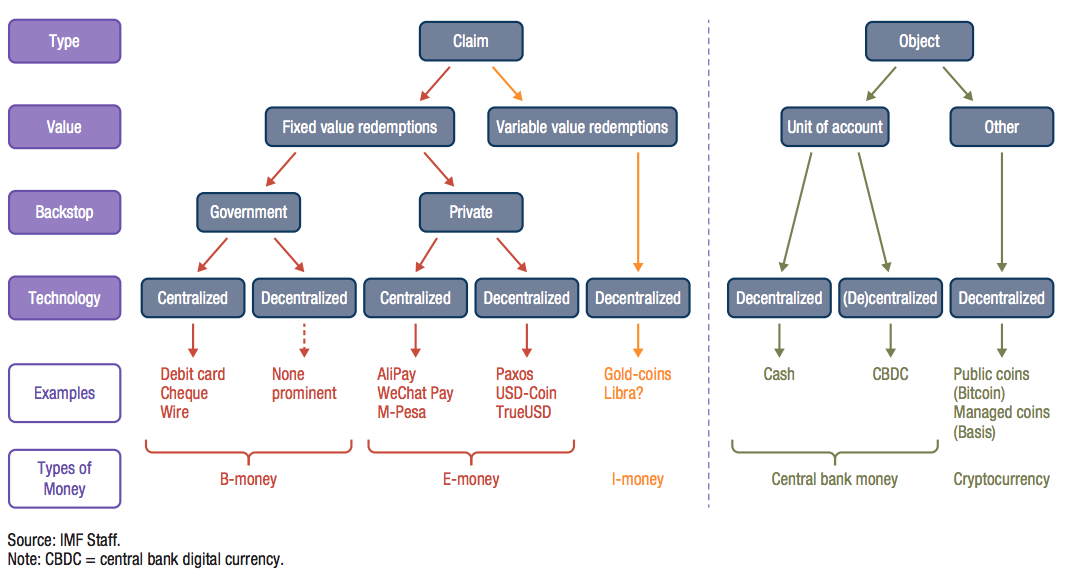 Devoting a section of its analysis to the question of central bank digital currencies (CBDCs), the IMF proposes a hybrid approach that would be established by a public-private partnership — defining the proposed asset as a synthetic CBDC (sCBDC).

A central bank would have limited responsibility as regards a prospective sCBDC, offering settlement services — including access to its reserves — to e-money providers, who would, in turn, be robustly regulated. This hybrid — and not full-fledged — sCBDC would stand to benefit from the comparative advantage of the private sector to innovate and interact with consumers while relying on the central bank to provide trust and efficiency, the report argues. The IMF concludes:

“Much lies in the hands of central bankers, regulators, and entrepreneurs [...] but one thing is certain: Innovation and change are likely to transform the landscape of banking and money as we know it.”

This spring, the IMF managing director Christine Lagarde said that blockchain innovators are shaking the traditional financial world and having a clear impact on incumbent players, having previously acknowledged that the organization could potentially release its own digital asset in future.