Institutional Interest in Bitcoin to Keep Rising After BTC Halving

Having recently gone through the third halving, one of the most important events in the ecosystem, Bitcoin (BTC) continues to establish itself as a new asset class and a worthy contender to gold as a new store of value for the digital age. Having seen a dip in price from the $10,000 levels to $8,500 just a few days before the halving, the Bitcoin price has remained below $10,000 even after the event.

Seeing its production cut in half in a matter of seconds, Bitcoin’s scarcity and low stock-to-flow ratio makes it an attractive investment for those looking to shield themselves from the inflation associated with fiat currencies and from political instability. Institutions seem to be no different, as regulated Bitcoin derivatives volumes started to post growing numbers in the midst of the halving.

The Chicago Mercantile Exchange’s volume for Bitcoin options reached an all-time high on May 11, at over $15 million, and has since been growing, reaching $40 million on May 13, according to data from Skew. The BTC futures market also recorded high volumes, reaching a three-month high on May 11 and registering just over $900 million worth of contracts exchanged for the day. 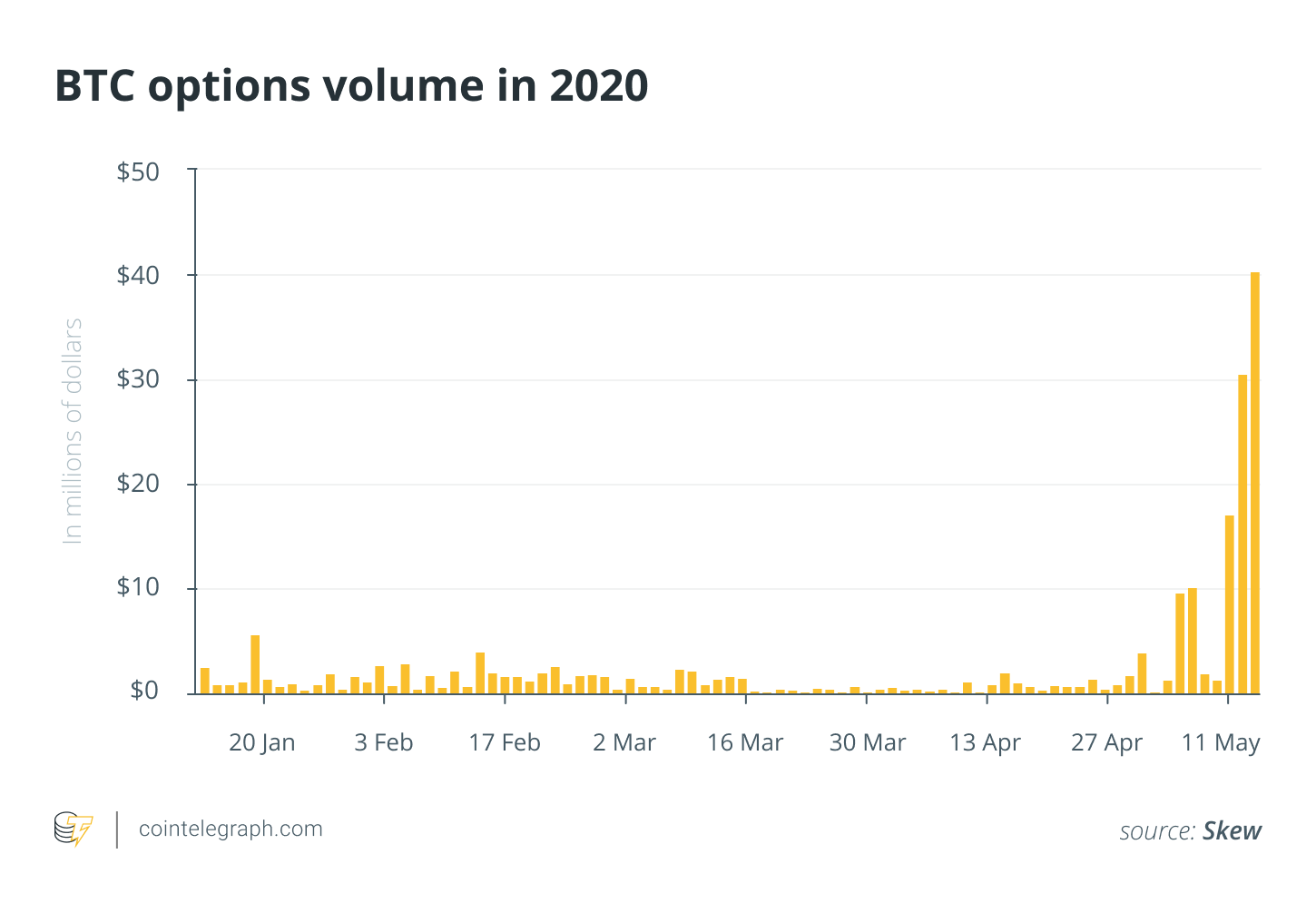 Institutional interest leading up to the halving

According to data by CryptoCompare, CME Bitcoin derivatives products have seen declining interest since the Bitcoin price crashed on March 12 and March 13, decreasing a further 11.1% to $4.5 billion exchanged in April. The recent volume spike could signal a change in the trend for CME Bitcoin products. CME Bitcoin derivatives data is just one of the many metrics through which institutional interest for Bitcoin and digital assets can be observed, and everything seems to point toward a growing interest from institutional players.

On May 8, just a few days before the halving, 3iQ Corp announced the completion of a $48 million offering of its Bitcoin Fund, which recently began trading on the Toronto Stock Exchange, or TSX, relying on custodian services by Gemini and index services from VanEck’s MVIS and CryptoCompare. The Bitcoin Fund is the first public Bitcoin fund listed on a major global stock exchange, as noted by Tyler Winklevoss.

Another piece of data pointing toward growing institutional interest is Grayscale’s recent Q1 report. The world’s largest digital currency asset manager posted record-breaking numbers in terms of capital inflow to its GBTC product, which currently holds 1.7% of the total BTC in circulation. Grayscale’s crypto funds brought in over $500 million in Q1, the majority of which comes from institutional players. Rayhaneh Sharif-Askary, Grayscale’s head of investor relations, recently told Cointelegraph, “Our recent conversations with investors reinforce the idea that now, more than ever, investors are going to be looking for ways to build resilient portfolios.”

In April, Fidelity Digital Assets, the cryptocurrency services division of Fidelity Investments, confirmed that it has seen an increased interest in digital assets. As Bitcoin continues to establish itself as a store-of-value asset, the “digital gold” narrative seems to resonate with more clients, Fidelity Digital Assets observed. An increased interest from pension funds and family offices has also been noted.

This “digital gold” classification is becoming increasingly important for Bitcoin as it continues to carve its identity among other assets. What was once looked as a rebellious attempt to overthrow fiat currencies and central banks is possibly turning into a level-headed investment asset class.

Just last week, the veteran hedge fund manager Paul Tudor Jones showed his appreciation for Bitcoin, stating that it reminds him of gold in the 1970s and that the digital asset may be the best hedge against growing inflation brought about by the coronavirus pandemic. The well-known manager estimates that around 1%–2% of his assets are held in Bitcoin.

Endorsements from respected figures like Paul Tudor Jones can also have a big impact on how fast other institutions jump on board the Bitcoin or digital asset wagon. Matt D’Souza, CEO of Blockware Mining and hedge fund manager, told Cointelegraph just how important the recent nod was:

“Paul Tudor Jones is the first domino to fall. Most Traditional finance and fund managers are followers. They will follow Paul Tudor Jones. Most managers don’t want to be the first but now they have to strongly consider bitcoin to assure they’re competitive.”

BitMEX CEO, Arthur Hayes, has also noted the importance of the endorsement from a figure like Paul Tudor Jones, stating that he expects a lot of “beta fund managers to begin cooking some copypasta.” Karen Finerman, co-founder and CEO of Metropolitan Capital Advisors and a CNBC Fast Money panelist, likewise believes this is a positive development:

“Nobody wants to get outed having owned Bitcoin if it completely falls apart. But if you can say that Jones owns it also, maybe that gives you a little bit of cover.”

Although it is becoming clear that institutional demand for Bitcoin is beginning to grow, investing in such a novel asset can be tricky for these corporations. With new, regulated options such as the aforementioned TSX-traded Bitcoin close-ended fund, this interest is being met, which allows institutional investors to begin dipping their toes in the Bitcoin market.

For example, Renaissance Technologies’ Medallion Fund — a hedge fund with $10 billion worth of assets under management — recently received approval from the United States Securities and Exchange Commission to offer CME-regulated Bitcoin futures products and services to its clients.

Bitcoin’s new-found attractiveness in the eyes of institutional investors goes way beyond the hype that motivates retail investors. A recent study by Bitwise shows that having a small percentage of holdings in Bitcoin in an institutional portfolio can be extremely profitable.

The report shows that, even if bought at its highest point, a Bitcoin allocation made in 2014 would have contributed positively to a portfolio’s returns (assuming quarterly rebalancing) due to Bitcoin’s unique return profile, which combines significant volatility and a lack of correlation with other assets.

A similar study was published by United Kingdom-based digital asset hedge fund Ecstatus Capital in April this year. The paper analyzed the impact of adding different allocations of Bitcoin to traditional portfolios over the five-year period from January 2015 through January 2020. Ecstatus’ study showed the potential diversification benefits that can be found with some exposure to Bitcoin using monthly rebalancing as opposed to quarterly.

Both studies highlight the importance of portfolio rebalancing when owning Bitcoin as part of a broader portfolio made up of a collection of other assets, as rebalancing effectively forces investors to buy low and sell high. According to a planned strategy, rebalancing a portfolio is reset back to its target weights when the investor sells a portion of the assets that did well over the period and buys more of the assets that did worse. The long-term effect of rebalancing is perhaps best summarized in a phrase coined by John Nersesian, head of advisor education at Pimco Asset Management: “Rebalancing doesn’t work every time, it works over time.”

While predicting Bitcoin’s next move is almost impossible, the road ahead seems bright for Bitcoin as institutions begin to slowly thread it. While institutional interest has been present for a while, it is now beginning to materialize and may even be accelerated by Paul Tudor Jones’ endorsement.

As institutions continue to eye Bitcoin, 2020 may finally be the year we see a Bitcoin Exchange-Traded Fund hit the market, a factor that will surely influence institutions’ perception and interest in Bitcoin.