CNBC’s Brian Kelly outlook on crypto in 2019, Bitcoin ETF in 2020, and inevitable recession. 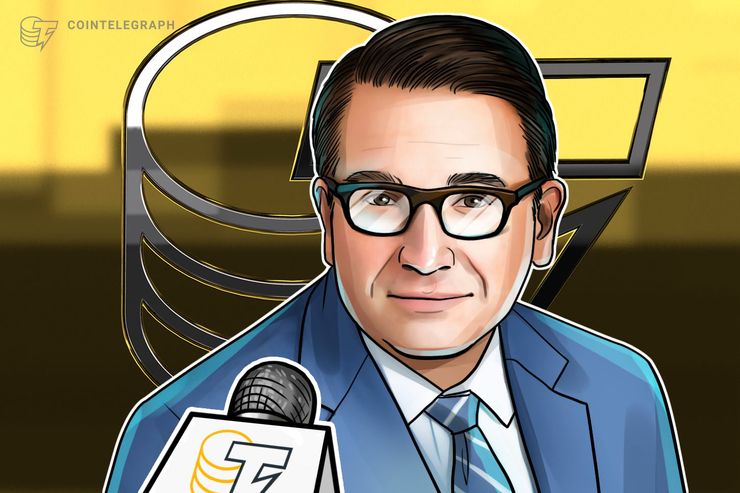 The author of the "The Bitcoin Big Bang — How Alternative Currencies Are About to Change the World," Brian Kelly calls himself an optimist when it comes to the future of the cryptocurrencies. CNBC’s prominent commentator, who is also the founder and CEO of digital currency investment firm BKCM LLC, analyzes markets on an everyday basis and tends to be 50 percent right “trading-wise.”

We met with Brian Kelly at the Crypto Finance Conference in Switzerland and talked about Bitcoin ETFs, the next financial crisis, and the best and worst jobs at the same time.

Catherine Ross: The most obvious question to you is, what is 2019 going to look like for the crypto industry?

Brian Kelly: That's a great question! The trillion dollar question. I think it's going to be better than 2018, which is a pretty low bar.

BK: As an investor, my number one concern is price. I look at the price and I say that we've seen three or four of these kind of boom-and-bust cycles in Bitcoin. If you look at the most recent two or so, we're following roughly the same path as we’ve had, which means we're somewhere closer to the end. We might have another dip lower — it wouldn't surprise me at all.

CR: And you feel it's going to be short term?

BK: I think very short term. And I think we're coming to an end. Here's the thing, the sellers that we've seen recently are almost forced sellers. Some CEOs had to raise cash because they say they “can't hold it in crypto all the time.” These are signs of the end. I don't know if it [the end of the cycle] is here or it's a little bit lower, but those are the signs of the end.

In 2019, if I'm looking at it, the focus will be on the currency — Bitcoin, Litecoin, some of those — because we have quite a bit of geopolitical tension in the world.

CR: And you feel it is contributing to the price?

BK: Yes. We're starting to see some global macro players use Bitcoin as an alternative to their gold position or as a way to hedge against fiat currency fluctuations and volatility.

CR: Using Bitcoin instead of gold?

CR: But is it stable enough?

But they're not looking for stability, right? They're looking for a safe haven that's uncorrelated to every other asset. So, for an investor and a speculator, the stability is actually not what you want.

You want that volatility because you're trying to get good returns. You're trying to get something that's uncorrelated to everything else. And that persists through 2019, and it starts to get to be more of a quote-unquote mainstream asset within the investment community.

One of the most anticipated events in the crypto industry is the approval of a Bitcoin ETF, which hasn’t happened yet, despite the numerous attempts. Last year alone, companies and institutions like the NYSE, VanEck, SolidX, Proshares and internet entrepreneurs the Winklevoss brothers (whose first attempt in 2017 failed) all filed with the United States Securities and Exchange Commision (SEC), but were rejected or are awaiting a decision.

The most recent development on the matter is the SEC’s review of a NYSE Arca’s Bitcoin ETF rule change proposal on Feb. 11. The proposal suggests “to list and trade shares of the Bitwise Bitcoin ETF Trust under NYSE Arca Rule 8.201-E.” This might end up being positive for the market, given the latest statement from SEC Commissioner Robert J. Jackson Jr. Speaking to Washington D.C.-based publication Roll Call on Feb. 6, he said, “Eventually, do I think someone will satisfy the standards that we’ve laid out there? I hope so, yes, and I think so.”

CR: One more very important question for you — will there be an ETF in 2019?

BK: That’s fine! I would bet against it. I don't think it’s going to happen this year. There's too much unresolved that is going to take longer than a year to resolve and before the SEC gets comfortable with what's going on.

CR: What kind of time frame are we talking about?

CR: Sounds promising! But major companies, like ShapeShift and Consensys had to lay off a lot of employees recently. What does this indicate?

BK: This is a part of the maturation process. We all got caught up in the big bubble. That being said, this is just a very natural part of the process. There are, unfortunately, some very good people that had to be laid off just because of market circumstances.

It doesn't feel great right now, but it will make the industry stronger.

CR: From the trading point of view, what are the major signs or indicators of bullish and bearish markets?

BK: You look at the bottoms and the tops.

I can remember in November and December — and even frankly in January, a year ago — I was getting phone calls daily like “How can I get into your fund?” “I need to get into that.” And we [at BKCM LLC] do a monthly entry and it's not something that you get into every day.

That was happening at the peak. At the bottom, the phone does not ring. It's the exact opposite. The euphoria that we saw last year is a mirror image of the pessimism we're seeing now. And so, what you want to look for at bottoms are extreme pessimism.

CR: And what about fundamental analysis? How does it look for the crypto industry?

BK: It's interesting! We have a proprietary model that gives the fair value for people.

So, you could have a significant upside. That being said, we've seen that a couple of times in the last year. We saw that in April of 2018 — a huge run in Bitcoin.

And that's what I'm talking about sentiment. So, the sentiment in the market has pushed the price of Bitcoin well below what you would consider a fair value — or at least, what I would consider fair. And that's another sign that we're near a bottom.

In the traditional currency world, supply and demand might be impacted by central banks. In the crypto world, the supply-demand being impacted by the miner-supply versus the investor-demand at this point in time. So, it's a little different.

There's a big learning curve to getting into analyzing cryptocurrencies. It's not like if you were analyzing airlines or the auto industry and you could immediately jump over and apply the same tools — these are very different tools.

CR: And how did you start in the financial world?

BK: I started as one of those annoying cold callers back in the 1990s. And I'd describe it as the best job on the worst job I've ever had in my life.

CR: Can you elaborate?

BK: It was the worst job because every day I would come into the office. I worked at Lehman Brothers [Eds: Lehman Brothers was the fourth-largest investment bank and global financial services firm in the United States. In September 2008, it filed for bankruptcy, which, many believed, started a global economic crisis]. They would hand me a stack of 700 phone numbers — I was supposed to dial two phones at once. My only job was — I wasn't allowed to pick stocks or anything like that — to connect the person on the other end with the broker.

I did that all day long as a summer internship, and then I did it a little bit after I graduated. But despite it being mind-numbingly boring, it taught me a lot about sales and human interaction. It didn't teach me too much about the stock market. But it did give me a really good foundation in how people think about the stock market and investing. That's where I started.

Then, I was an equity sales trader. Then, I started a company called MKM Partners, which is an institutional broker dealer. After that, I started a global macro fund, trading foreign currency — and that got me into the Bitcoin world.

CR: How many times were you right in your analysis or predictions?

BK: Generally speaking, if I'm right slightly more than 50 percent of the time, I consider that good. On a longer-term basis, trading-wise, I'm generally right about 60 percent of the time — there's some good periods and some bad periods. But it's important for people to understand that...

You have to have that ratio right. You could be right only 30 percent of the time and still make a lot of money as long as you make three times more on your right predictions as you do on your losses.

CR: You’ve mentioned that you started at Lehman Brothers. Can I ask you how many years ago it was?

BK: I wish I could say I saw that. I knew something was wrong, but I can’t say that I predicted that.

CR: Have you seen any indicators of the real estate bubble [Eds: the housing and credit bubble most analysts call the reason for the 2008 financial crisis] back then?

BK: Without question — the real estate looked like a bubble! Not too dissimilar from what we saw with the crypto ICOs bubble. So yes, you could see the signs of trouble. The problem with seeing them is that it’s very hard to predict when they're going to end.

CR: And the real consequences, probably.

BK: Yeah, the real cost. For me, in 2007, when Bear Stearns [Eds: the now defunct New York-based investment bank, securities trading and brokerage firm] got bailed out by the Federal Reserve, that was the first signal for me that something was very, very wrong.

CR: Is it at all possible to predict the next financial crisis? There are a lot of headlines about the looming recession and upcoming financial crisis. Should we prepare ourselves for the worst?

CR: It's just the way the market works, right?

BK: Yes, but this one is going be a little different than the other ones we've had.

Because what we've done lately is taken all the risk off of the private balance sheets and put them onto the government balance sheets. And so that's a very different scenario. And that's very positive for crypto. If you think about what backs a fiat currency — [it’s the] full faith and credit of the government.</