Patrick Byrne, founder and CEO of U.S. retail giant Overstock, is planning to sell the retail arm of his company to focus on blockchain by early next year, The Wall Street Journal (WSJ) reports Nov. 23.

Byrne, known in the blockchain industry for his commitment to the technology, did not disclose the details of the agreement, nor did he name potential buyers; he did however tell the WSJ that he expects to have the deal closed by February 2019.

The WSJ reports that Byrne has been planning to sell his e-commerce business since 2017 to fully devote himself to blockchain projects.

According to WSJ, Overstock’s blockchain-focused subsidiary Medici Ventures is the cause of visible losses for the company. In 2017, Medici lost $22 million, while in the first nine months of 2018 it has already lost $39 million. The overall losses for Overstock amounted $163.7 million for the reported period of 2018.

Byrne, however, remains stalwartly optimistic about his blockchain ventures. “I don’t care whether tZero [one of the projects backed by Medici] is losing $2 million a month. We think we’ve got cold fusion on the blockchain side,” he explained in the interview. 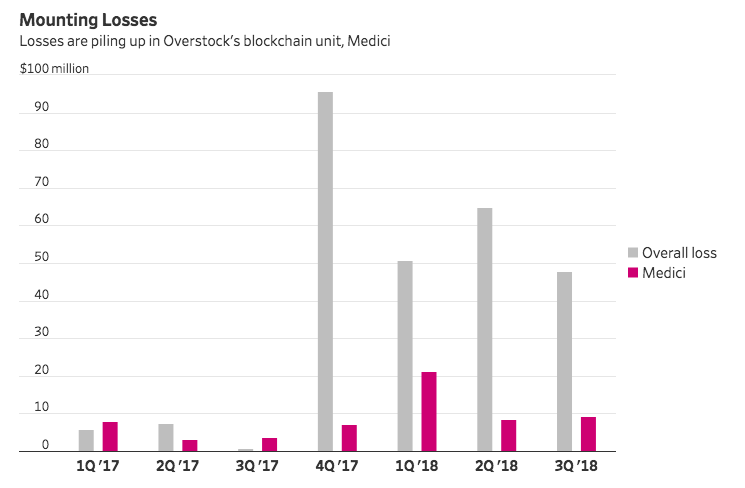 Overstock was launched back in 1999 to sell surplus and returned merchandise online and became a “pioneer” in the crypto space by becoming one of the first major companies to accept Bitcoin (BTC) in 2014.

According to WSJ, a remote blockchain-driven voting in U.S. state of West Virginia was among the projects that Medici backed this year. As Cointelegraph reported following the matter, in the 2018 midterm elections, 144 military personnel stationed overseas from 24 counties were able to vote via a decentralized mobile platform Voatz. Despite the concerns about the security of mobile voting, West Virginia’s officials considered the experiment a success.

Another project supported by Overstock’s blockchain division is a land registry platform in Zambia. In August, Medici Land Governance partnered with the Zambian government to develop a system of decentralized land ownership, allowing rural landowners to legitimize their estates and gain access to the financial world.