Silicon Valley VC Peter Thiel has put millions of dollars into BTC via his venture capital fund, the WSJ reports.

The Fund reportedly invested $15-20 million into Bitcoin, which has grown into hundreds of millions in the past year. Since Jan. 1, 2017, BTC has risen by almost 1,400 percent.

The WSJ report was unclear on whether or not Founders had sold any of its holdings to date.

Thiel, co-founder of PayPal and an early Facebook investor, also serves on President Trump’s technology advisory council. At an investment conference in October, Thiel spoke positively about cryptocurrency, and in particular about Bitcoin, saying:

“While I’m skeptical of most [cryptocurrencies], I do think people are a little bit underestimating bitcoin, specifically, because it is like a reserve form of money. If bitcoin ends up being the cyber equivalent of gold, it has great potential.”

Since the WSJ reported on the Founder Fund’s BTC investments, the price of the leading cryptocurrency has gone up, growing almost 14 percent in the past few hours to a peak of $15,444 a coin. BTC has been trading sideways since, priced at around $15,000 at press time. 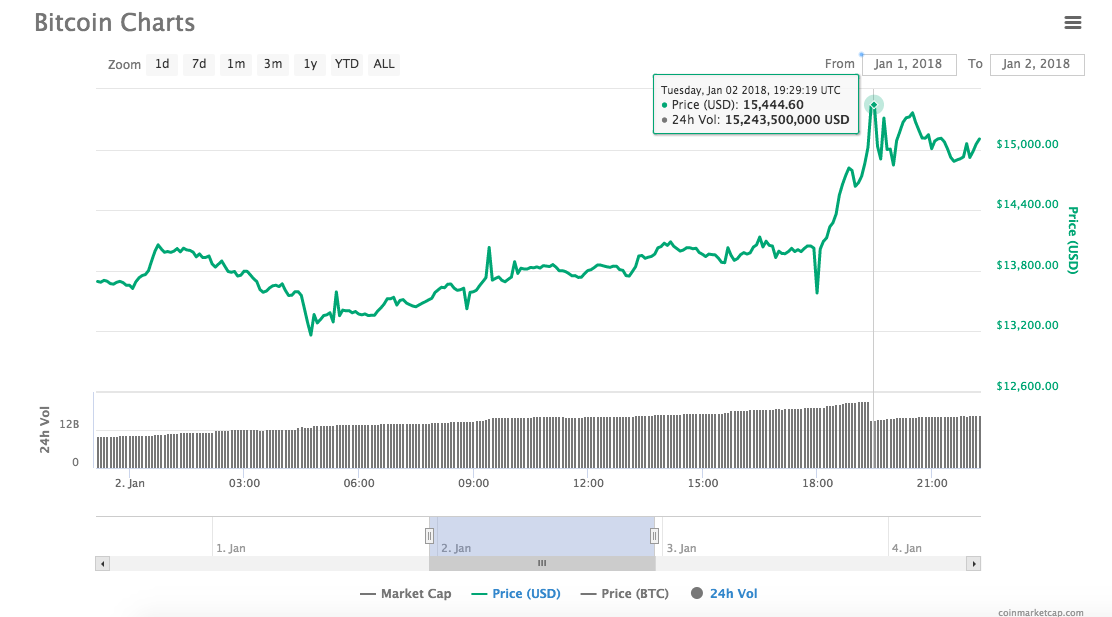 The price boost today follows a volatile past few weeks, after the coin hit an all-time high of over $20,000 in late December and then crashed to as low as $11,833 on December 22. Today, BTC dominance reached a new all-time low of 34.97 percent, reflecting an increased market interest in altcoins.

Other well-known mainstream investors to bet on Bitcoin recently include Bill Miller, who told reporters in mid-December that 50 percent of his hedge fund’s money was invested in the leading cryptocurrency.