A new report from the Bank for International Settlements (BIS) shows that 2020 is the year that momentum behind central bank digital currencies (CBDCs) has truly taken off.

“Attitudes about whether central banks should issue them [CBDCs] have changed noticeably over the past year,” the paper’s authors write. Their research includes a striking analysis of public interest in CBDCs over time. BIS’ data shows that in 2020, worldwide internet searches for CBDCs decisively outflanked searches for Bitcoin (BTC) and Facebook’s Libra. 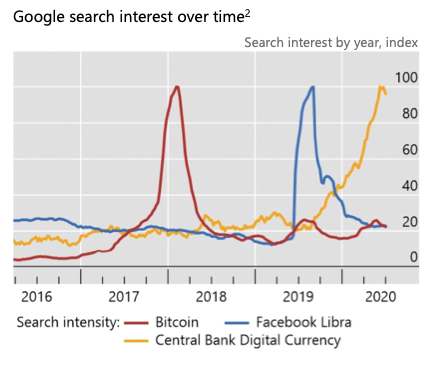 The data vindicates the report’s claim that even though the concept of CBDCs was proposed decades ago, “CBDCs have seized global attention” in 2020.

BIS provides several hypotheses as to why this may be. First, it points to the announcement of Facebook’s Libra and the subsequent public sector response in 2019 as an unmistakable “tipping point.”

Further data backs this up: as of late 2019, “central banks representing a fifth of the world’s population reported that they were likely to issue CBDCs very soon.” Moreover, the share of central banks likely to issue a retail CBDC over the medium term (1-6 years) doubled in 2019.

A crucial factor quickening this trend, in BIS’ analysis, is the advent of the coronavirus pandemic:

“Social distancing measures, public concerns that cash may transmit the COVID-19 virus and new government-to-person payment schemes have further sped up the shift toward digital payments.”

BIS draws attention to the United States, where early versions of Congressional bills on fiscal stimulus referred to the potential for a digital dollar to hasten the disbursement of government aid to citizens. In the Netherlands, China and Sweden, central banks are keeping their CBDC research work a high priority during the pandemic.

All these factors could be enough, in BIS’ view, to overcome the “great inertia” typical of retail payment behaviors. The flipside, however, is lasting impact:

“When behaviours change, they often do so quite persistently. In the same manner, changed payment behaviors caused by the COVID-19 crisis, such as a greater use of digital payments, could have far-reaching effects in the future.”