The settlement of monthly futures contracts points to bullish short-term performance for Bitcoin, which has already begun reversing its downward trend.

Bitcoin (BTC) is statistically likely to gain in the coming week as a new futures expiration event comes and goes, according to new data.

Compiled by trader an analyst Luke Martin on Nov. 25, figures charting Bitcoin price performance before and after each expiration show that overall, higher levels appear afterward.

Martin used CME Group’s monthly futures as a basis. Among the first futures to hit the market in December 2017, their settlement dates — of which Friday was one — have already attracted attention as a force for moving price. 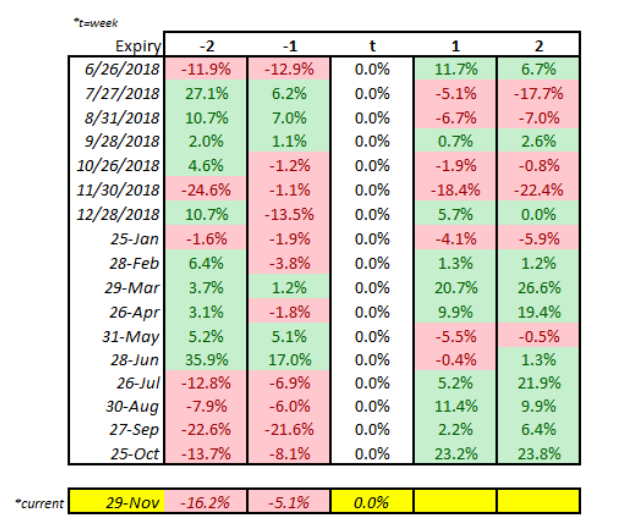 “Takeaway: Generally experience selling pressure before and positive returns after,” he summarized.

Per the calculations, a negative return for Bitcoin investors a week before futures payout results in a positive return the following week — 73% of the time.

On average, says Martin, post-settlement returns are positive the following week at 2.9%. The week after that fares better still, with an average 3.9% increase.

By contrast, the week before each event sees average losses of 2.4%. So far, last week’s performance was worse than usual at 5.1%, but settlement week conversely produced 7.7% gains.

Since Friday, CME Bitcoin futures are up around 2% with a settled price of $7,800, according to the latest data from the company.

No bears in futures markets

As Cointelegraph reported, futures markets, in general, continue to see strong performance despite bearish sentiment which has characterized Bitcoin price action in recent weeks and months.

This week, fellow operator Bakkt saw a clear record high for its futures trading volume. The personal best came on Nov. 27, when $42.5 million worth of contracts changed hands.