Social Innovations and Secret Conversations (on the Blockchain)

New ways to communicate through coded conversations and secret languages are being implemented on blockchains.

There’s a novelty in finding new ways to communicate through coded conversations and secret languages. How is this being implemented for good — or otherwise — on blockchains?

Since its beginnings, blockchain technology has led to many movements, including the formation of a unique crypto community. This blockchain community is forming its own lexicon (including a more formal vocabulary that industry opinion-makers are creating and debating and Twitter-based crypto slang like hashtagging Lambos and Bitcoin whales.)

There is also another language that has developed, the one in blockchain platforms themselves — developed through a “glitch” in the blockchain system — through a coded instruction that was meant for something else entirely. This is a conversation created through transaction signatures — the method of transfer — with coded messages built into the hash.

What started this trend? In part, it came from necessity, the need to find an anonymous way to converse with each other — to complete a private transaction. It may also be rooted in psychology. “Groups of people form their own private lexicons because coded language is exclusive, exciting and defiant,” Gary Nunn wrote. An exclusive argot gives ownership, pride and a sense of being part of something greater than oneself.

A coded language can be used for harmless activities such as in-jokes or conversations, but they are often developed by a person or people in need of a way to communicate as anonymously as possible. And so, it stands to reason that transaction signature conversations have been used for harmless fun between online friends and also for illicit activities between bad actors.

What are some of the ways that transaction signatures have been used for conversing, for better or for worse? Let’s start first with a description of how a conversation actually works using blockchain technology.

Signed on the dotted line, with a public and private key

A digital signature or transaction (TX) signature is the detail of an electronic document that is used to identify the person transmitting data on a blockchain. The signature acts as a transaction validation, linked to the public key of the entity involved. It’s a confirmation that the transaction has not been tampered with in any way — a trustless transaction. Here’s how it works: 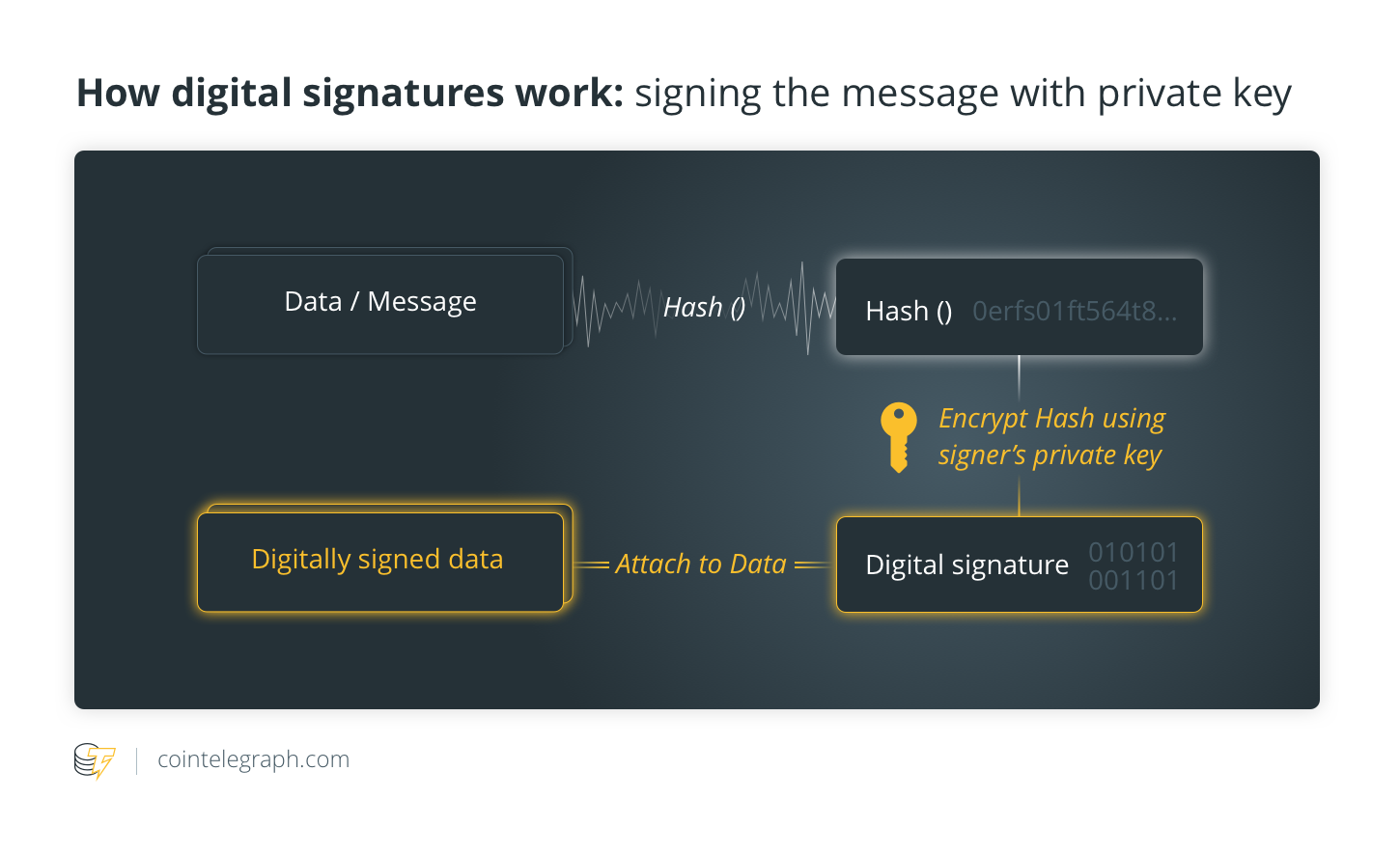 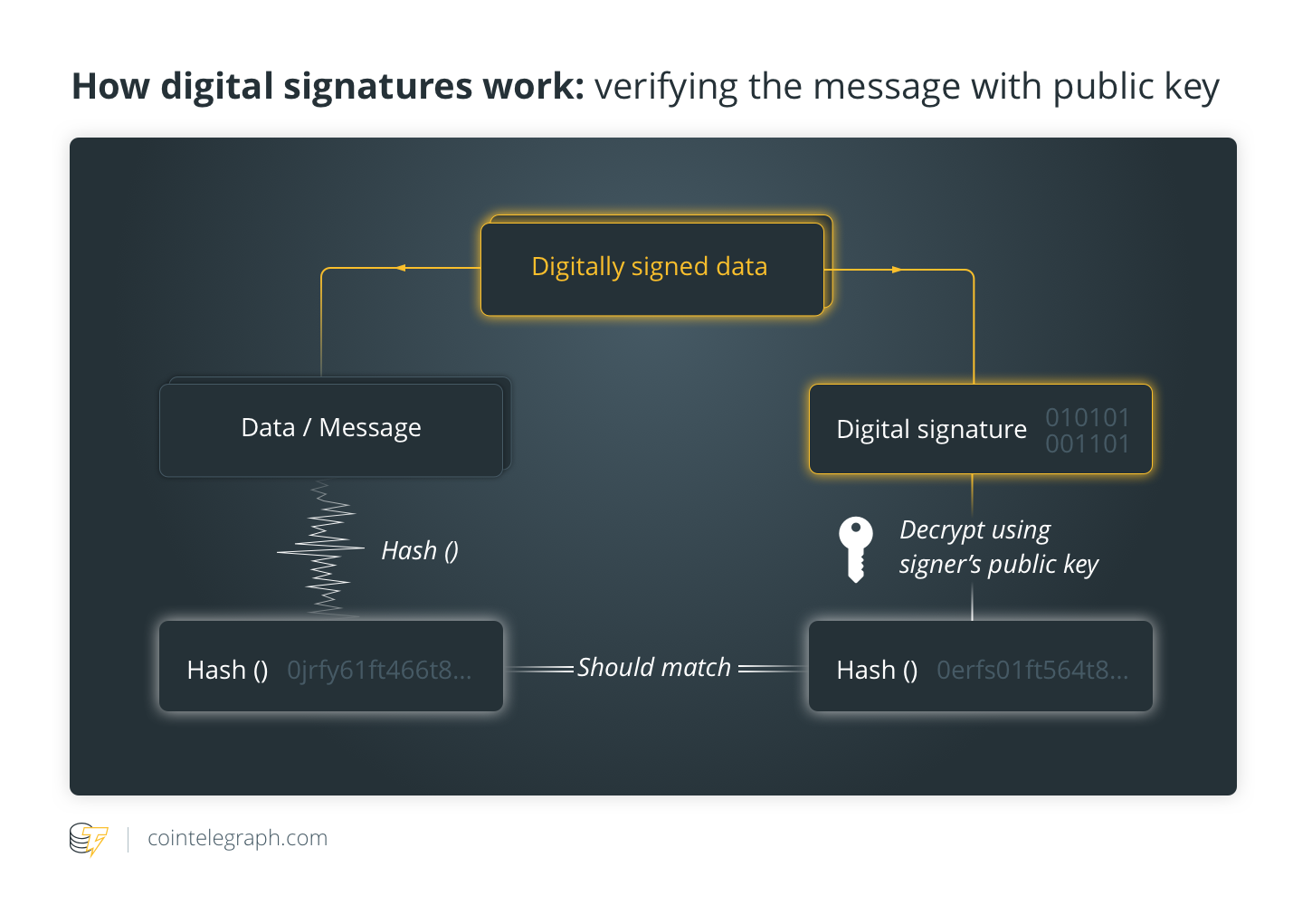 Coded conversations through a “glitch” in the tech

Users of the technology at some point or another realized that it's possible to add a so-called “OP_Return output” to the transaction — an instruction coded into the Bitcoin blockchain by Bitcoin developers. This output would be nonspendable, the data attached to it, however, would remain on the blockchain forever. And so, coded conversations on the blockchain began.

Some believe that this is an irresponsible use of the technology, as the Bitcoin blockchain was created solely for financial transactions and not a record for arbitrary data. Either way, it has become a function used by transactors, whether it was initially intended as such or not.

Here are some of the more novel ways that the OP_Return output has been used so far:

One of the first OP_Return messages that gained notoriety was the use of the lyrics “Never Gonna Give You Up” by Rick Astley (following the theme of the well-known rick-roll meme) to play pranks on users. A hacker, for example, who demanded payment by blackmail was rick-rolled by a prankster who used the first few symbols of addresses to spell out the lyrics of the song and send only tiny amounts of Bitcoin. Each transaction made by the prankster was worth 0.001337 BTC, and was effectuated in homage to leet, a code of modified spelling using numbers in place of letters. 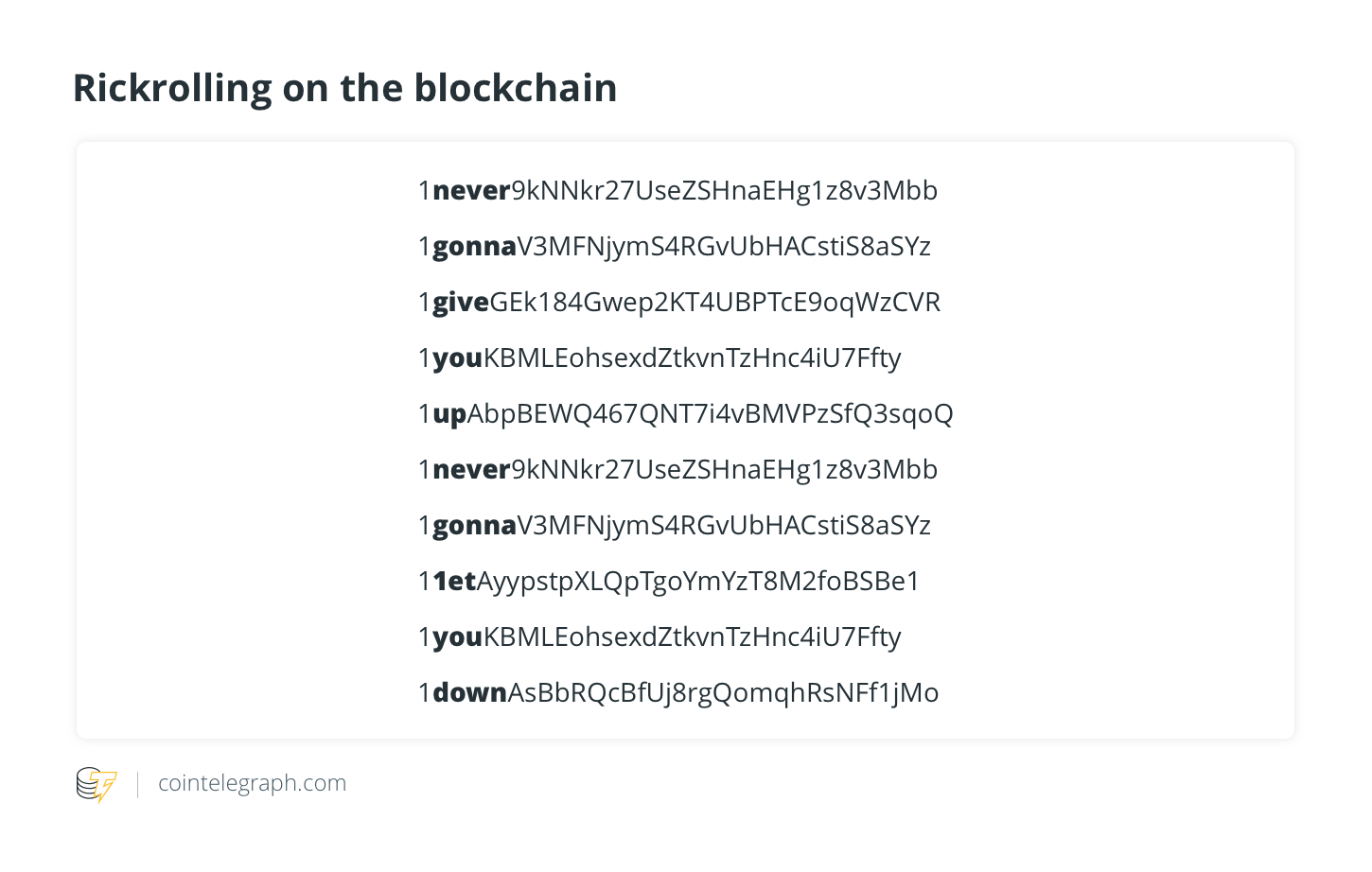 A relatively slow uptake in decentralized application (DApp) adoption might be due to users having to pay a transaction fee to complete an action — Mahesh Murthy of Zastrin noted the fee as a pain point in a blog post he wrote about a voting DApp he created. He mentions an idea by John Backus as a solution to this bottleneck using a similar function to OP_Return for Ethereum DApps through a private key. 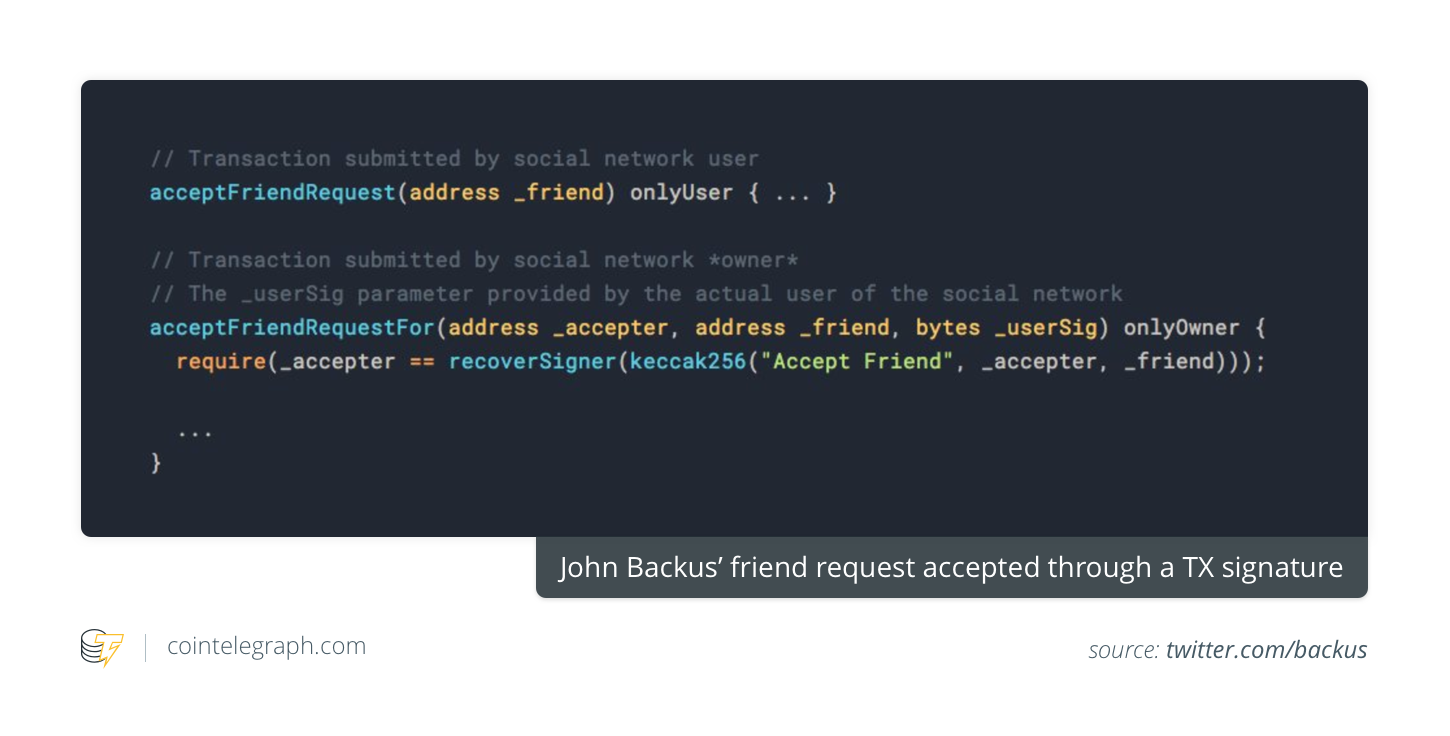 Eternity Wall, a service for writing short messages on blockchain, is mostly used for writing proverbs, jokes and love declarations, but it can also be used to reply to a message sent via the service, so conversations may be created. 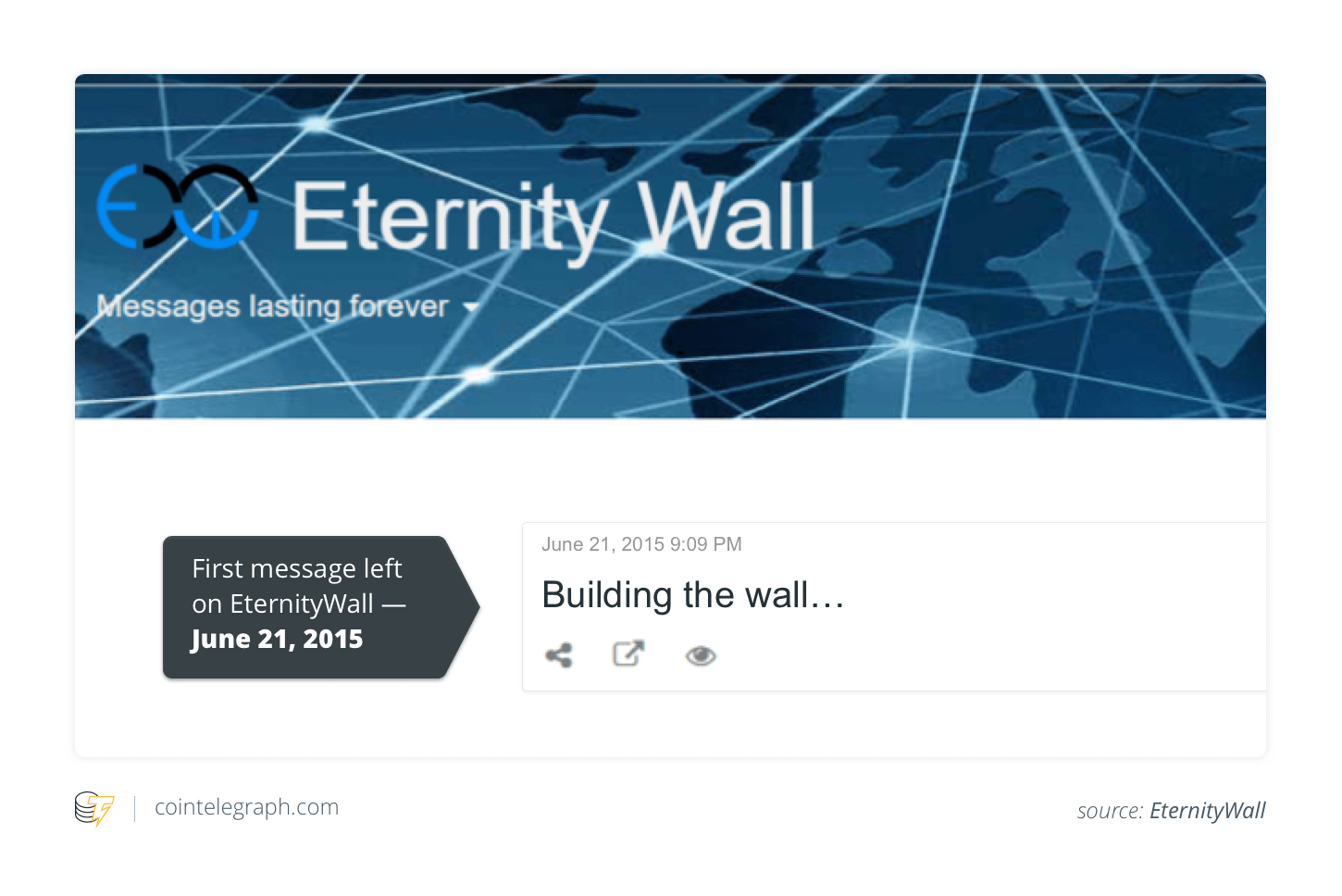 Ricardo Casatta, creator of Eternity Wall, has also promoted the potential political use case for such a tool as an uncensorable means of communication, having written in a post, now unavailable:

"If you live under a dictatorship, you could use it for saying something that your government would remove or block."

An entertaining way of using OP_Return is to organize quizzes on a blockchain. The address 1HoTZGKwXY2HM8UBpiBKtBUd8otPpsJ5Pc has sent several riddles via OP_Return messages, for example.

Here's what was sent by the address:

And probably the answers lead you to some private key, since the last message was: 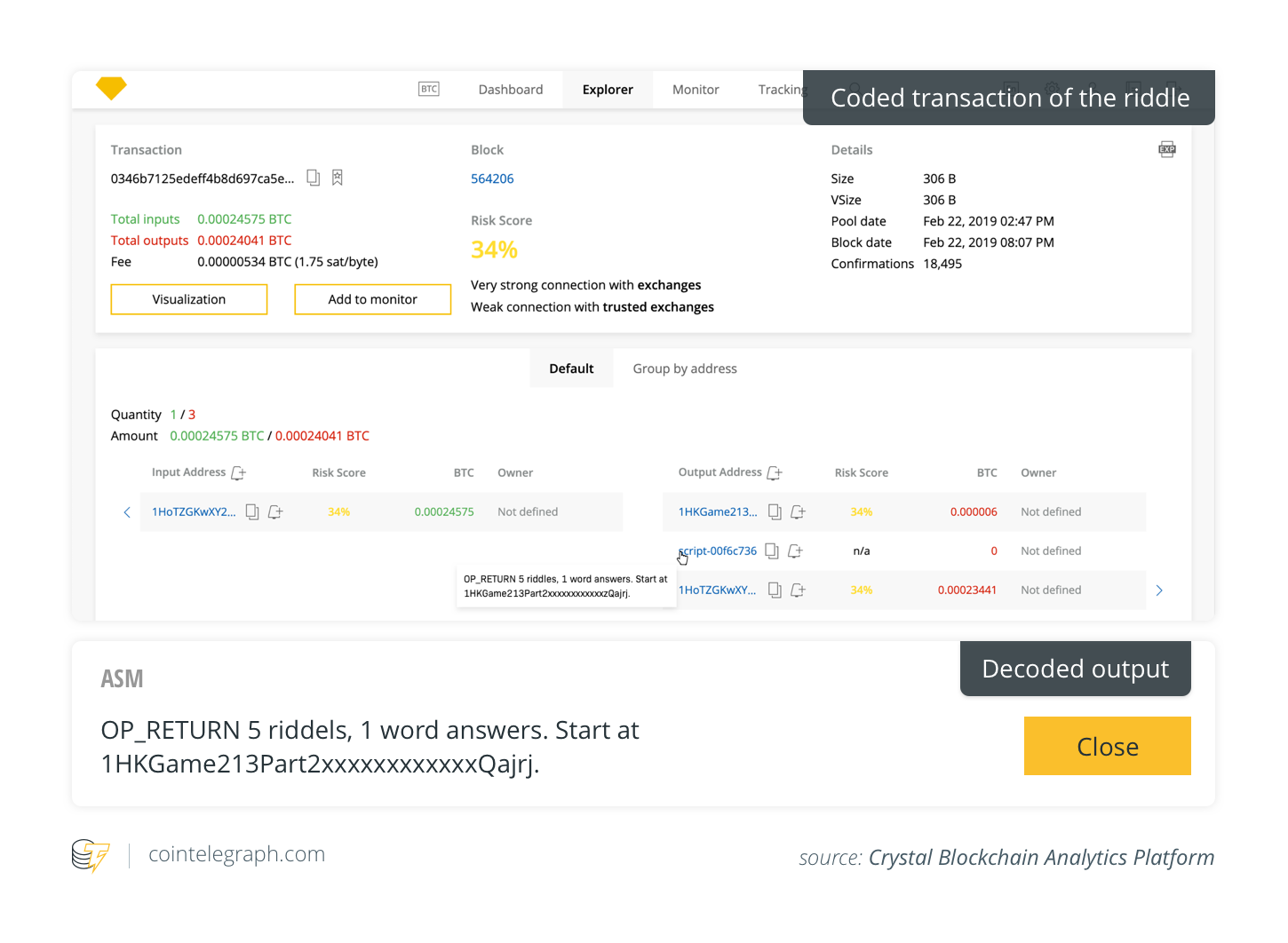 The webpage Bitscribble was created as a simple interface that could be used to write messages on a blockchain via the OP_Return script.

In January 2019, Parisian-based street artist Pascal Boyart created a mural with a hidden Bitcoin prize, announcing the treasure hunt on Twitter to participants eager to win the coveted reward. The stunt was a celebration of the 10th anniversary of the first mining of a Bitcoin block. If you’re wondering if it’s been solved yet, you can find out here. 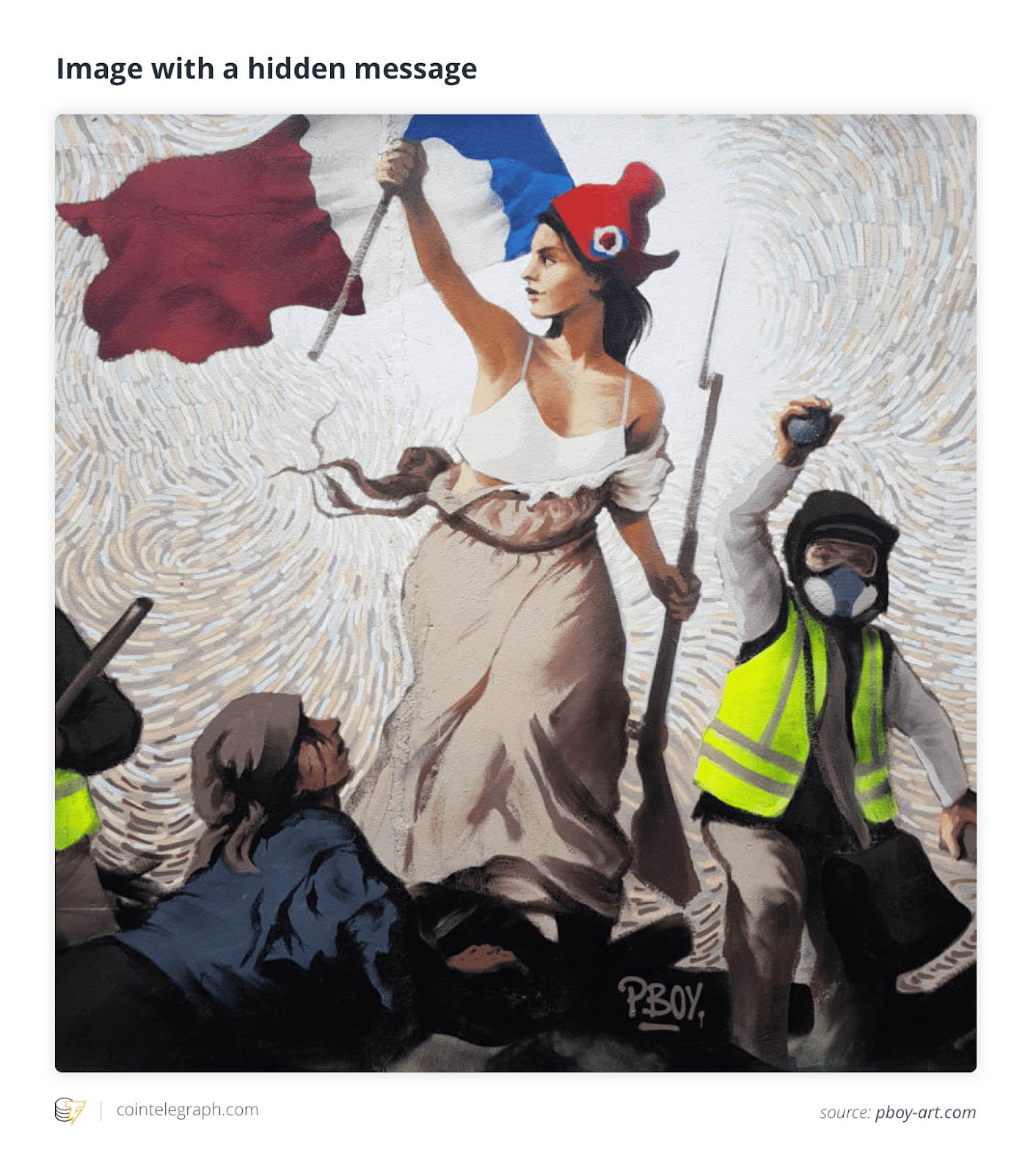 There has been everything from marriage proposals to cryptic clues to messages supposedly written by Satoshi encrypted on the Bitcoin blockchain.

If you’d like to learn how to write a blockchain message yourself, here’s a step-by-step guide.

The OP_Return script may be used to contact a person on the Bitcoin blockchain if you only know their Bitcoin address. There are some incidents in which this tool has proven very useful for transactors: For example, a person may be contacted if they received stolen funds for some reason or if someone accidentally sent them a transaction that needs to be returned.

When communicating with a hacker following a security incident in August 2016, Bitfinex offered the OP_Return instruction as a potential method for anonymous communication, should the hacker wish to get in touch with the exchange and find a compromise in return for a bug bounty.

Going back as far as 2014, the OP_Return script has often been used by spammers.

Bitcoin Cash as a messaging service

There is, in fact, a social network called Memo in which all networking actions are recorded to the BCH blockchain. Bitmain co-founder Jihan Wu has publicly tweeted that he has an account on Memo, inviting his Twitter followers to sign up for an account and get in touch with him.

CryptoGraffiti is a solution that allows anyone to easily decode and read arbitrary messages that have been saved to the blockchain. The tool detects transactions that contain either “human-readable text messages or files of known formats” and publishes it under a reader tab.

With the advent of social media as a powerful communication and advertising tool, the conversation has inevitably — and regularly — returned to how a decentralized technology like blockchain can be harnessed to provide enhanced social networking opportunities. Realistically, though, until the user interface and user experience are at the level of major current social networks, the tech won’t appeal to those who already have easy-to-use messaging applications at hand.

Not only that, but the question of whether people want their private (or indeed public) conversations permanently imprinted on a ledger remains to be seen. Transparency is important, but people still want to feel a certain sense of privacy.

That being said, the world is no longer a private forum, with public data becoming so available as users sign their rights away. Perhaps it’s not such a stretch to envision a decentralized, international social networking platform on a public and permanent ledger.

The article was co-written by Kyrylo Chykhradze and Pavel Mischchenko.

Kyrylo Chykhradze is the Head of Product at Crystal Blockchain, Bitfury’s analytics tool for blockchain and cryptocurrencies. He joined Bitfury after having worked as an academic researcher for five years, where his areas of focus were graph theory and real-world network analysis. Along with being deeply involved in forming the global product strategy for Crystal Blockchain, Kyrylo is also leading its internal forensic investigation department.

Pavel Mishchenko  is the Head of R&D at Crystal Blockchain. He joined Bitfury in 2015 after obtaining a master's degree in Advanced Mathematics at the Ecole Normale Supérieure de Lyon. His primary areas of interest are statistics, data analysis, and probability theory. Pavel actively participates in mathematics competitions and has been awarded gold medals at the International Mathematical Olympiad. Pavel is the Research & Development Lead at Crystal, and is also heavily involved in the development of algorithms for efficient cryptocurrencies data analysis.

The views and opinions expressed here are solely those of the authors and do not necessarily reflect the views of Cointelegraph.