An analyst says the Tesla stock chart looks similar to the weekly fractal of Bitcoin in 2017 when it achieved $20,000.

Julian Bridgen, the co-founder of the macroeconomic research firm MI2 Partners, believes Tesla stock (TSLA) shows signs of a bubble. He compared the stock Bitcoin (BTC) in 2017 when it hit $20,000 and dropped 58% in two months.

From the yearly high to the month’s bottom, TSLA price dropped by 33.74%. The stock has recovered in the past 48 hours, posting a considerable recovery of 12.46%.

Bridgen shared a chart of Tesla stock with a fractal of Bitcoin’s weekly chart from 2016 to 2019. He demonstrated some of the technical similarities between the two charts and explained:

“What defines a bubble? A great story is essential. In fact, the better the story the bigger the bubble. Then lots of liquidity and finally a classic bubble chart. For example, #bitcoin in 2017. In TSLA we have all three.” 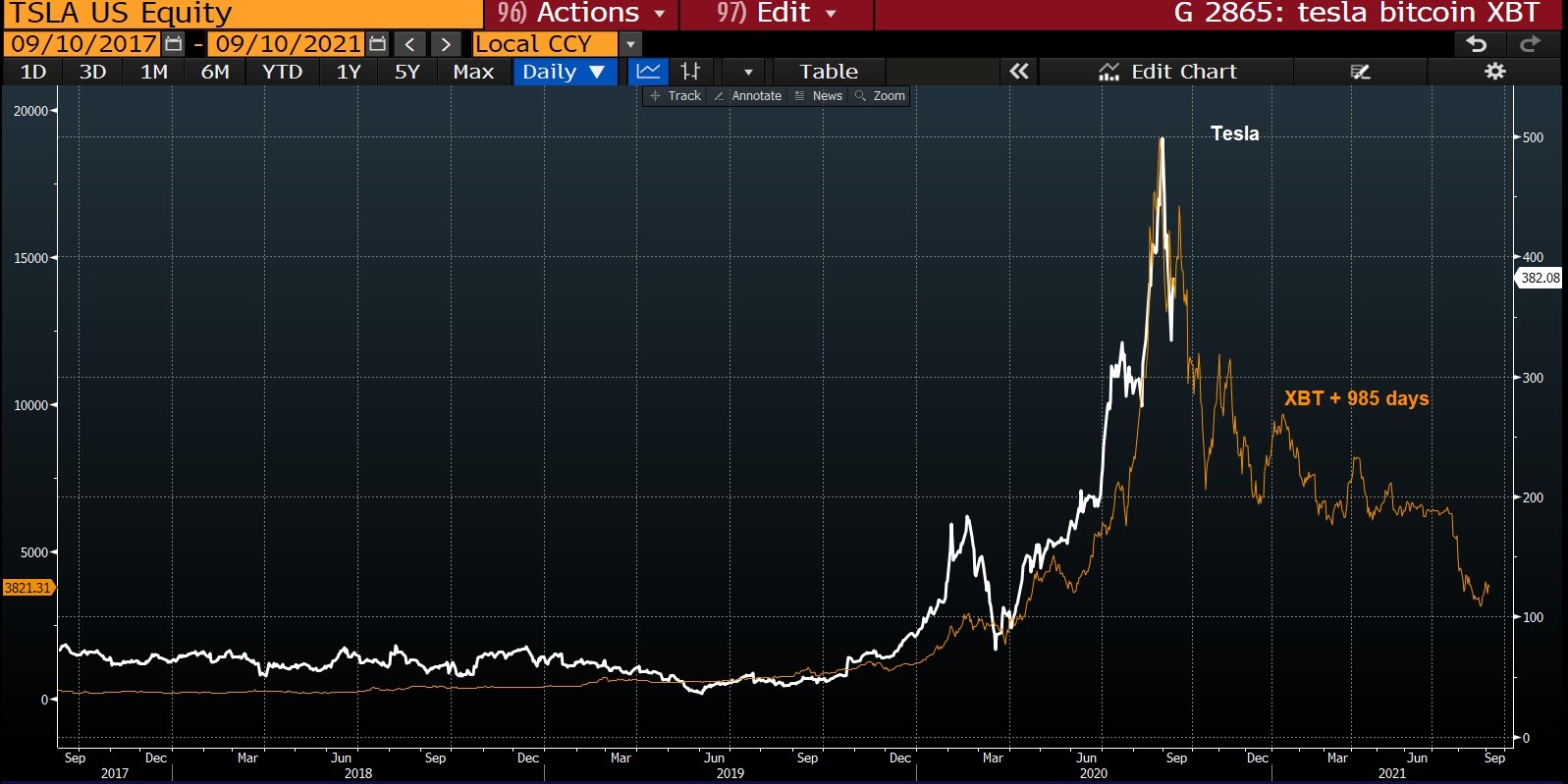 While the similarities between the Tesla and Bitcoin charts exist, there are several key differences. First, the chart compares the daily chart of Tesla stock to the weekly chart of BTC. Second, Tesla, as a public company, is fundamentally different from Bitcoin, a digital peer-to-peer network.

Moreover, Bitcoin is becoming increasingly seen as a store of value, often referred to as “digital gold.” Investors, both institutions and individuals, utilize BTC as a means to store and transfer value. For instance, MicroStrategy purchased $250 million worth of Bitcoin on Aug. 11, adopting it as the firm’s primary treasury asset.

In contrast, Tesla is the world’s most valuable carmaker whose stock price massively depends on the company’s performance.

But while there may be technical similarities between the Bitcoin and Tesla charts — especially since the correlation between BTC and stocks hit new highs this summer — fundamental factors likely affect the TSLA stock more than technicals.

Variables such as the release of new technologies and an S&P 500 inclusion of the Tesla stock in the medium term could lead to the stock’s recovery.

At the same time, some analysts have predicted inclusion in the S&P 500 may see significant challenges solely due to the size of Tesla. Levy said on Sept. 2:

“Of course, there is no guarantee Tesla will be included in the next add given challenges in adding a company of Tesla’s size.”

As such, an argument could be made that the Tesla stock’s pullback was expected, and was largely intensified by the Nasdaq’s recent slump.

What do analysts say about the long-term outlook of BTC?

The chart of Bitcoin in late 2017 is often used to compare with other charts portraying vertical rallies.

Some investors, including Three Arrows Capital CEO Su Zhu, said he was surprised by the stability of BTC above $10,000, expressing optimism towards its macro price trend.