Demand for USDC and PAX has grown but USDT still leads among stablecoins, fiat and cryptos when it comes to volume into Bitcoin.

While Tether (USDT) is currently the most popular stablecoin by far when it comes to trading volume and market capitalization, the latest Exchange Review from CryptoCompare shows that other stablecoin projects such as USD Coin (USDC), Paxos Standard (PAX) and TrueUSD (TUSD) have gained modest ground in the last few months, reducing USDT’s market share in monthly Bitcoin (BTC) volume traded into stablecoins from approximately 98% in July 2019 to 92% in March.

The price of Bitcoin is currently sitting at $7,002, having largely recovered from the “Black Thursday” crash of March 12. Although some traders point to a possible pullback, USDT’s growing supply may signal more buy pressure, a somewhat bullish sign for Bitcoin, although investors may also be looking to get exposure to the USD through crypto. 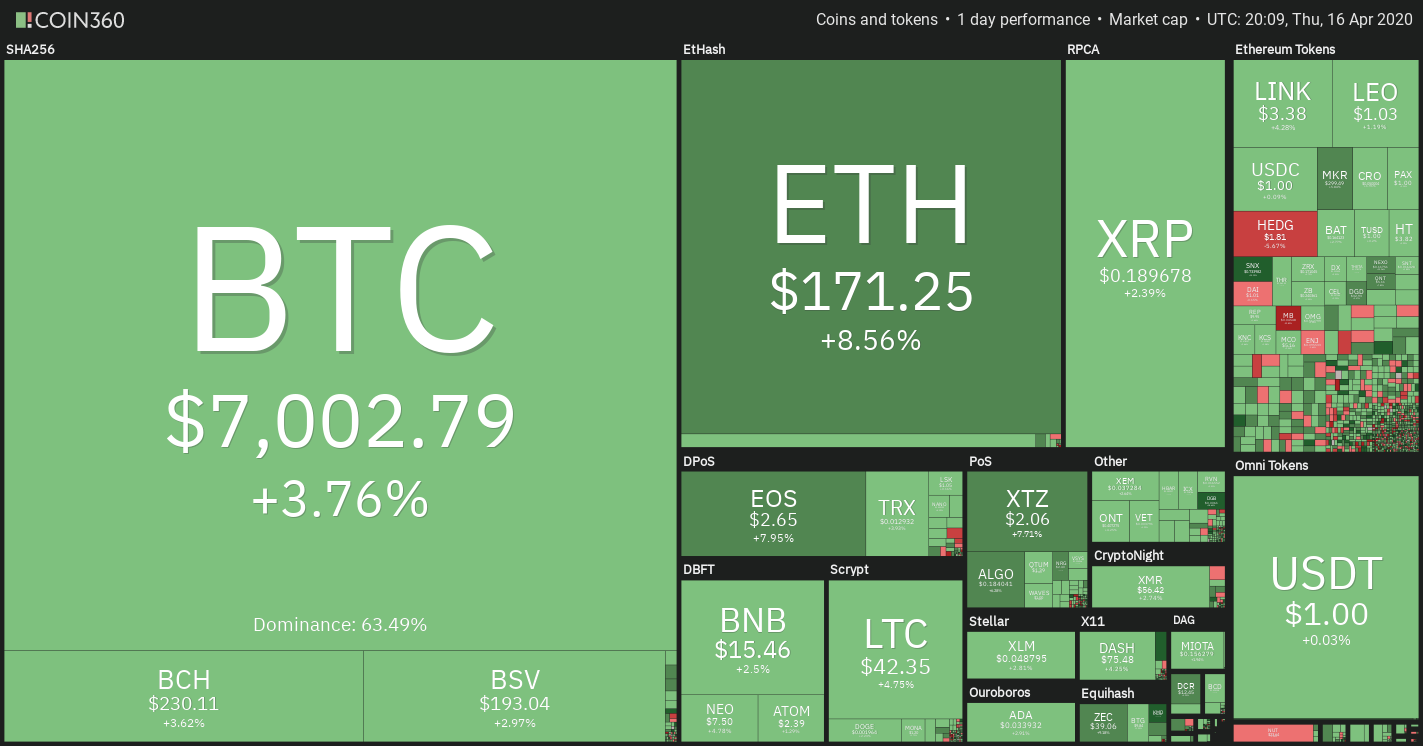 Nevertheless, both stablecoins have become increasingly popular in recent months, with USDC representing approximately 5% of BTC volume into stablecoins and PAX with 2.5%. 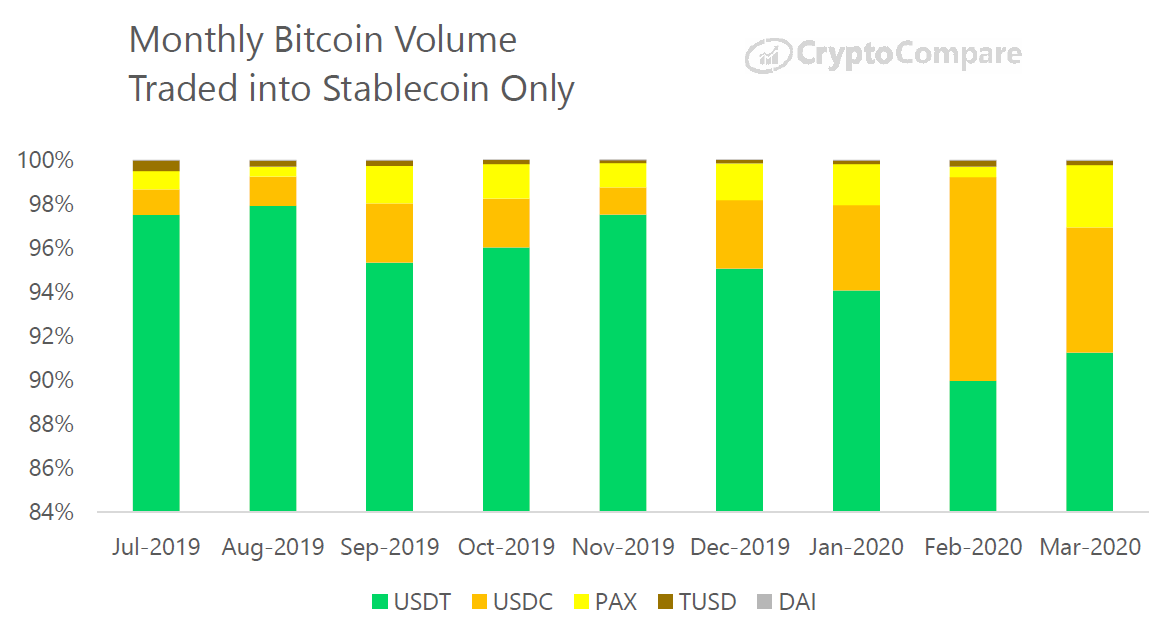 While USDC and PAX have gained some market share over the last few months, especially in February, the BTC–USDT pair still represents the majority of BTC traded into stablecoins with an overwhelming 92% of the volume, approximately.

USDT saw over 21 million BTC in volume during March and now represents 73% of total BTC traded into fiat or stablecoin. 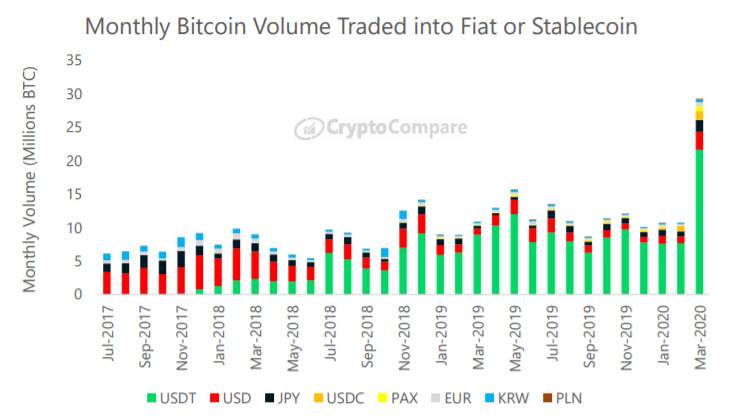 Other stablecoins are also beginning to surpass major fiat pairs, with both USDC and PAX overtaking the pairs of BTC–euro and BTC–South Korean won in terms of total volume.

Stablecoins play an important role in the cryptocurrency world. Traders can get exposure to the price of fiat currencies and precious metals without leaving the cryptocurrency world, which allows for fast, cheap and censorless payments. Most importantly, users can actually “own” their assets, which are not prone to the risks of leaving funds with a third-party exchange.

Demand for stablecoins can be observed in the USDT supply, which has grown by $2 billion since March 12, the largest inflow in USDT’s history. According to Glassnode, the USDT balance on echanges has also reached an all-time-high of 1,661,769,830.684 USDT. A 2018 report found that large purchases with Tether were "timed following market downturns" and resulted in increases in the Bitcoin Price.

USDC also saw its biggest monthly inflow by four times. Increased demand for stablecoins can mean buying pressure for Bitcoin but also demand for alternative ways to store and transfer fiat currencies and to move into other stablecoin assets.

Moreover, exchanges like Binance also offer double-digit interest rates on stablecoins, which makes them even more attractive as a store of value and alternative to fiat. Recently, the Group of 20’s Financial Stability Board issued a study on stablecoins, citing this very factor as the main concern. The study reads:

“During periods of stress, households in some countries might come to regard GSCs [stablecoins] as a safe store of value over existing fiat currencies and exacerbate destabilizing capital flows. Volatile capital flows can have a destabilizing effect on exchange rates and on domestic bank funding and intermediation.”

The G20’s FSB has also expressed some concern for decentralized stablecoin protocols like MakerDAO’s Dai. But despite seeing an all-time high in terms of active unique wallets during March, decentralized finance stablecoins are still too small to pose a serious threat.

Stablecoins’ role in the COVID-19 pandemic

The importance of stablecoins became evident during the March 12 crash when liquidity was key. Bitfinex, which is the most liquid exchange in terms of order book depth, saw the most volume at the exact moment the crash started. This outweighed the volume recorded at Binance and Okex. During the crash, Bitfinex handled volumes in the magnitude of $11.8 million worth of trades per minute.

However, stablecoins may also have a role to play in the larger scheme of things, especially during the current coronavirus pandemic. For example, stablecoin projects like Celo and Saga aim to bring additional stability by providing an asset pegged to an underlying basket of fiat currencies. This technique can help individuals further hedge their bets, as they are not exposed to a single country’s currency, which can be a very attractive proposition in the current climate. Keren Orian Nadel, Saga's managing director, told Cointelegraph:

“The SGA model starts by being fully reliant on the value of a trusted basket of currencies — replicating the configuration of the IMF’s SDR (Special Drawing Rights), which has been successfully trialed for over five decades now. But unlike all other stablecoins, SGA aims to eventually separate from the SDR and become an independent currency with its own value. We believe this answers a vital need: for the global economy to be served by a global currency tailored to its needs — and independent of any single nation’s fiscal and monetary agenda.”

Meanwhile, some have even suggested using stablecoins as a readily available alternative to the digital dollar for COVID-19 U.S. dollar stimulus payments. Stablecoins and cryptocurrencies alike are already providing advantages, such as the ones previously listed, for those who want to hedge against the current economic downturn.