Stablecoin Tether has just surpassed XRP as the third-largest cryptocurrency and is now the second-largest altcoin behind Ethereum’s Ether (ETH).

Tether’s USDT has just surpassed XRP in market capitalization, becoming the third-biggest cryptocurrency in the moments leading into the Bitcoin halving.

Sitting with a market cap of $8.79 Billion, it is now bigger than XRP, whose market cap is roughly $8.6 billion. USDT is currently second only to Ether (ETH) as the largest altcoin in the cryptocurrency market.

The market cap rise comes as a result of the constant increase in the supply of USDT, the majority of which circulates on the Ethereum blockchain. There have also been huge inflows of USDT into exchanges in recent weeks in the run-up to the Bitcoin halving. 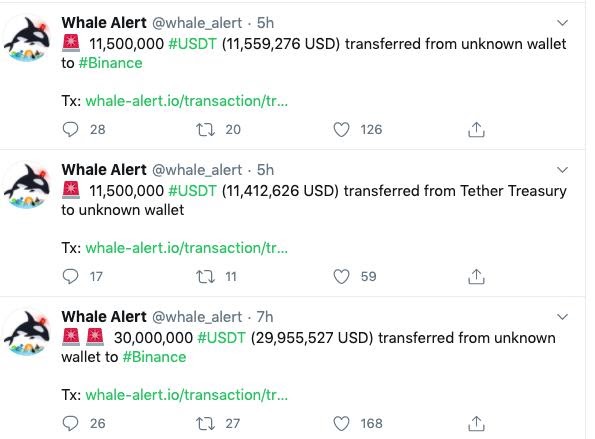 While it is normal for exchanges to hold large amounts of USDT, especially ahead of a big event like the halving, it can also be considered as a bullish sign for Bitcoin as investors may be preparing to buy cryptocurrencies with USDT.

Most USDT isn't just being taken off exchanges to be stored in wallets or cashed out through a FIAT-based platform like Coinbase. When people aren't using USDT, they most often put it in Bitcoin. And what's cool is the fact that this USDT percentage often fluctuates a few hours or days in advance of BTC's price reacting to it. So monitoring this metric in advance can end up producing a tremendous advantage by catching a sudden fluctuation early enough.

Tether USDT dwarfs other stablecoins by market capitalization, trading volume, users and every other metric. Tether has also expanded beyond the dollar and has launched stablecoins pegged to the Chinese yuan, the CNHT, the euro as well as gold.

Other stablecoins like USDC, PAX and TUSD lag behind, with USDC having a market capitalization of $707.64 million. USDT is also the most popular BTC pair and comprised an overwhelming majority of 74% of the total Bitcoin traded into fiat or stablecoin in April.

Nevertheless, despite the impressive growth of USDT, other stablecoins like USDC and PAX are also growing in popularity and have consistently captured small bits of market share in the stablecoin market, with both representing around 4% of all BTC-to-stablecoin volume.

Regardless of the growth of other stablecoins, the BTC/USDT pair still represents 90% of all BTC traded into stablecoins today. 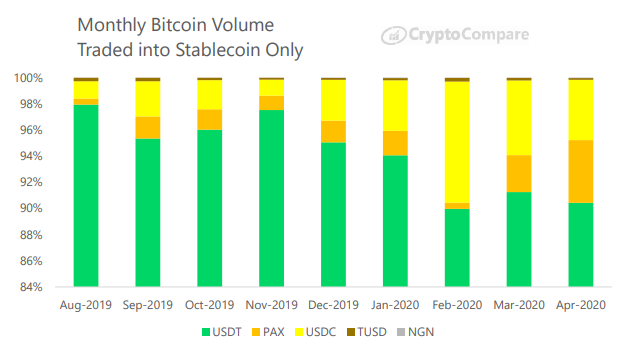 While the market cap of USDT has been growing, trading volume has decreased when compared to March, the month in which Bitcoin reached breaking numbers all across the board, including in terms of BTC traded into USDT and other stablecoins.

Following the large drop in Bitcoin and other cryptocurrencies in March and largely fueled by the coronavirus outbreak, BTC trading into USDT has decreased 26% from 21.6 million to 16.1 million BTC in April. 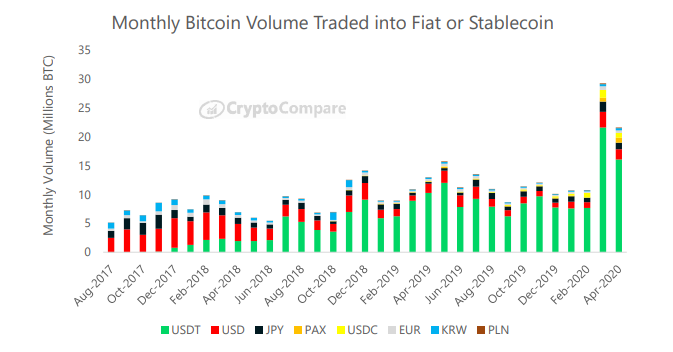 Other stablecoins like the USDC saw a similar trend, its trading volume reducing by 39% in April. PAX, on the other hand, saw 0.85 million BTC worth of volume during April, a 27% increase from March. Both stablecoins, although not as big as USDT, beat direct fiat pairs like BTC/EUR and BTC/KRW, showcasing the popularity of stablecoins.

It is likely that stablecoins are continuing to grow in popularity due to their usefulness even to those that are not invested in the cryptocurrency market themselves. However, it is also possible that the continued interest can be seen as a bullish sign for Bitcoin, as research has shown there is an inverse correlation between USDT on exchanges and the Bitcoin price.