The Saber Case: How Complementary Currencies Can Go Crypto And Change The World

Complementary currencies is a time-tested alternative to regular money dating back to Ancient Egypt. Now that they can go crypto, there's a real chance they may change the world.

In the past few years we’ve been witnessing the new massive waves of cryptocurrency adoption — you can now pay in Bitcoin for almost anything from coffee to real estate. But the ideas were always above money in community and there is still so much untapped potential from decentralized digital coins. A history of Saber — a Brazilian complementary currency project, developed in early 2000s to promote the educational system, is an important example of the social potential we tend to forget keeping up with the rates of exchange.

Complementary currencies (CCs), also known as community currencies, are basically an alternative (or, indeed, a compliment) to conventional money. Their purpose is usually to strengthen the local economy at times of recession by stimulating additional transactions and therefore keeping the economic cycle in motion or to achieve certain social, environmental, or political goals.

In most cases CCs are not legal tender - i.e. they are not accepted at a national level; you can’t buy whatever you want using it - they only function as a quasi-monetary exchange medium for certain purposes within a restricted area. In theory, CCs should stimulate the local economy and encourage people to act collectively intelligent. Although replacing conventional money and undermining national currency is not usually the goal of a complementary currency, the state often appears to be reluctant to the idea, and the model has developed the reputation of an experiment, not a proven method.

The first complementary currencies could be traced back to ancient Egypt, where local people used otrakas — pieces of pottery — to issue receipts for the amount of harvest farmers would put into storage. Those pieces, in turn, could have been traded for local services. Similarly, in medieval Europe people would regularly turn in bracteates — pieces of jewelry — for new coins, although always with a deduction. The system was designed to prevent people from hoarding coins and keeping them out of the financial ecosystem. That, in turn, would increase the velocity of regular money. 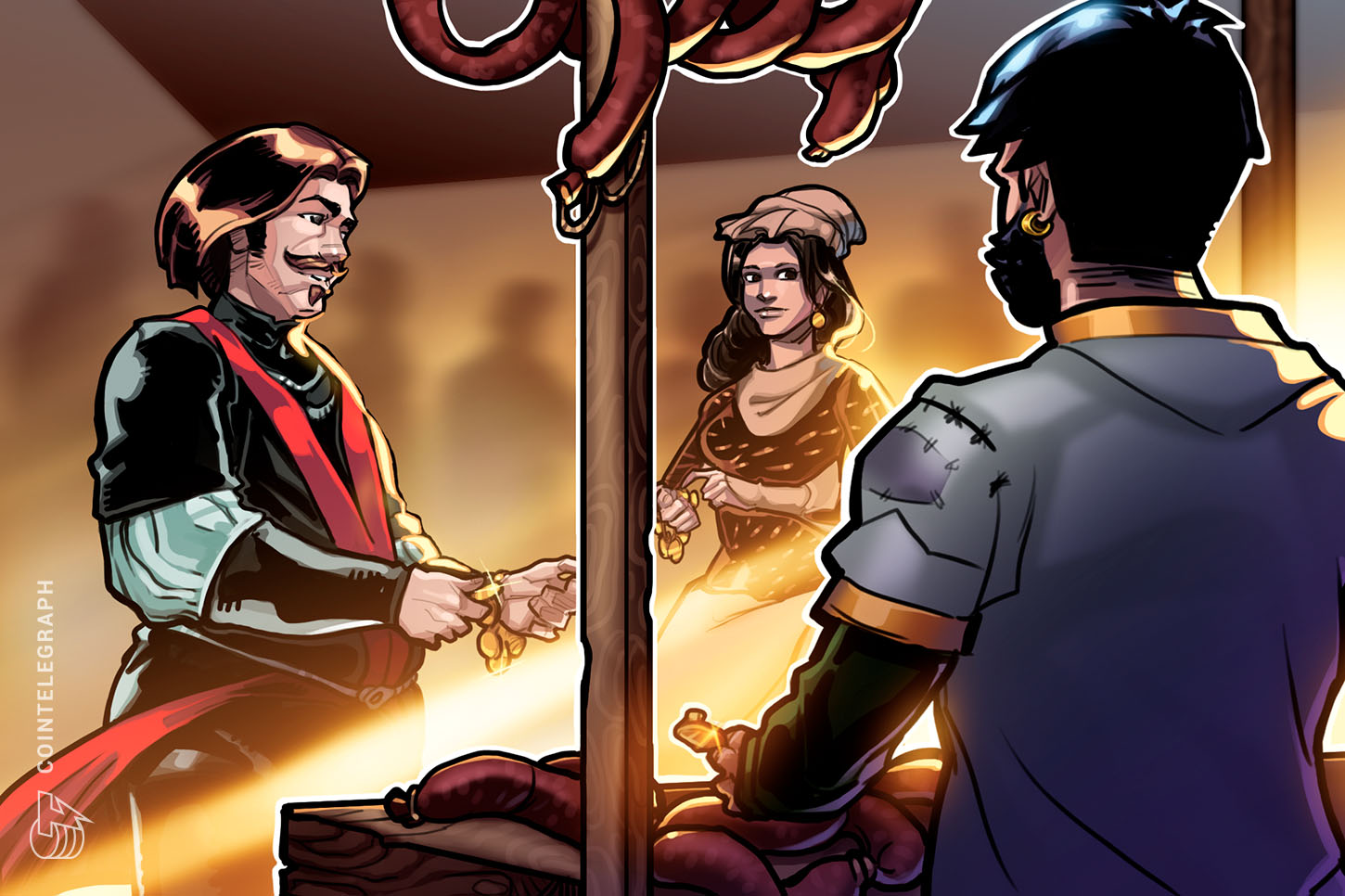 In recent history, CCs started to appear in the first half of the 20th century. One of the most notable example is the Wära free economy experiment held in Germany. The Wära was a currency introduced by Hans Timm and Helmut Rödiger, followers of a German merchant, theoretical economist and anarchist Silvio Gesell. During the course of the experiment, Wära banknotes were printed, available in denominations of 1/2, 1, 2, 5, and 10 Wära (one Wära would be equal to one Reichsmark) to support the economy of a mining town Schwanenkirchen, which had been hit with massive unemployment. Like otrakas in Ancient Egypt and bracteates in medieval Europe, Wära was a demurrage-charged currency, which means that each banknote had a monthly cost fee of one percent of its nominal value. This prevented people of Schwanenkirchen from storing the currency and putting it out of active circulation. It had its benefits for users too: for example, people who bought coal (the local economy’s staple) using Wära received a discount.

During the course of the experiment, Wära allowed local services to continue despite the fact that the national currency was scarce. As a result, new jobs were created and taxes were paid. However, the scheme ended abruptly: the finance ministry of the Reich forbade the currency, and the town returned to its previous decadent state.

Similar experiments were held in other countries around that time: local currencies were used in Wörgl, Australia (1932 - 1934), Alberta, Canada (1936) and in the US during times of Great Depression.

In 2003 a Belgian economist Bernard Lietaer collaborated with Brazilian professor Gilson Schwartz of São Paulo University - who has previously worked as an economist at various public and private financial institutions including BankBoston - to submit a proposal for a complementary currency called The Saber to the government of Brazil.

Saber was aimed to help Brazilian schools provide greater educational opportunities “without creating any new financial pressure on the economy”. The educational vouchers were designed to launch a substantial “learning multiplier” so that a given amount of money can produce more learning for a bigger number of students. In other words, The Ministry of Education would allocate Sabers among schools in economic areas where normally there is no funding for higher education. Local students at the age of 7 were to receive a certain amount of Sabers on the condition that they must choose a mentor among older students (they can later earn more Sabers by giving those lessons at the rate of 5 Sabers per hour). At the end, when they turn 17 and graduate from school, they could spend the gathered Sabers to pay (fully or partly depending on the available amount) university tuition fees. 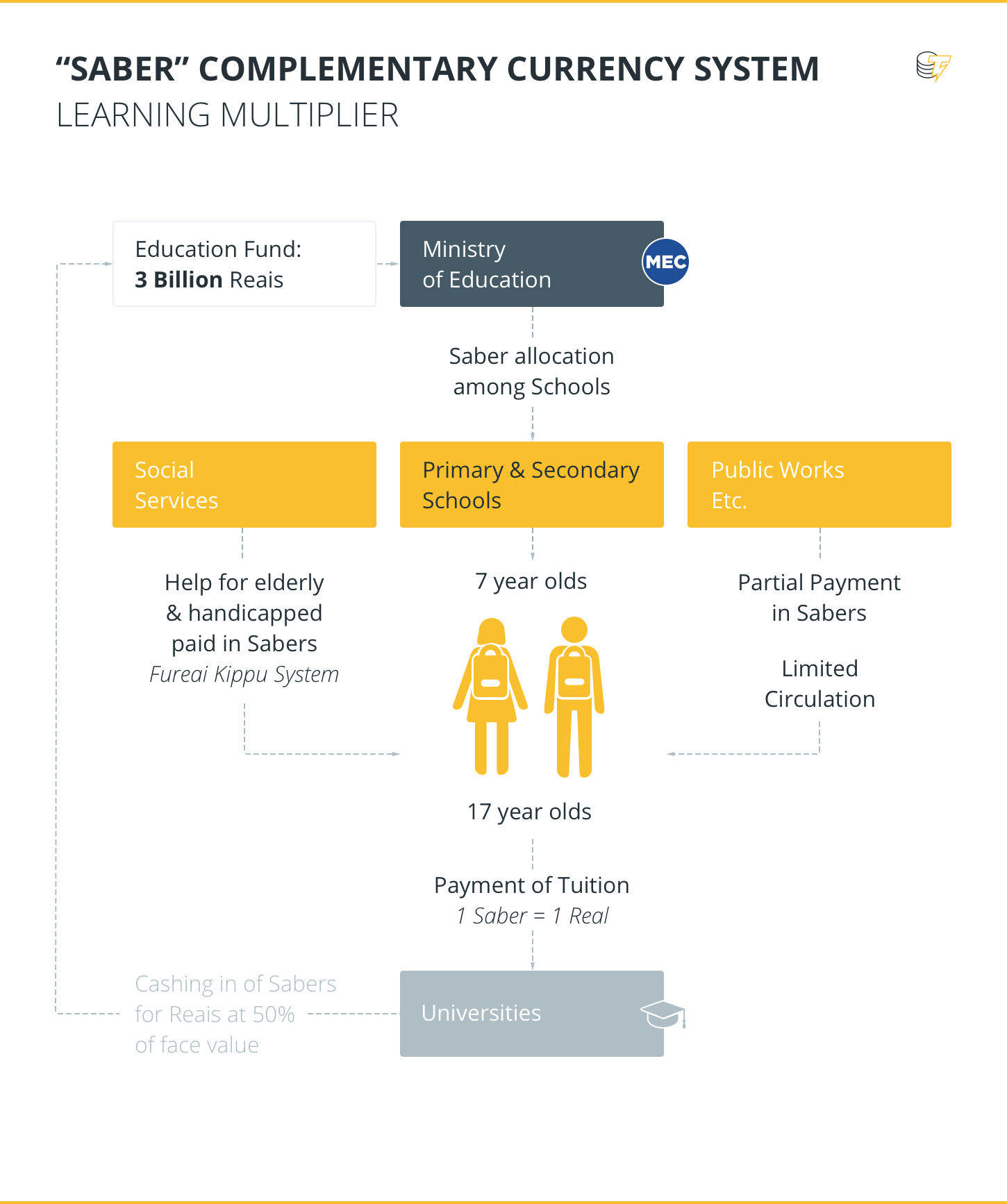 The mere idea of an alternative to the local currency sounded rather controversial. As  Schwartz remembers over a Skype call with Cointelegraph:

“Pioneers are doomed to see the other side of Jordan river, but never make it there. Maybe I was researching [the concept of creative currencies] too early, but anyway it’s not about anyone’s idea, it’s more about the zeitgeist”.

The Brazilian government declined the project at the review stage. However, 18 years since Schwartz's team first started doing the research on CCs, things have changed considerably. Now, the rise of Bitcoin allows more room for experiments in the financial area. Schwartz notices:

“I think it’s a learning process for everyone. Now the private banks, as well as some departments at a federal level are discussing blockchain technology here. Sao Paulo’s stock exchange has also been one of the pioneering institutions [in that regard].

Now it’s becoming much easier to explain to my partners, local leaders or young people what a creative currency could be, because there’s Bitcoin and all that discussion whears 10-15 years ago that would be seen as completely out of question — how can you even dare to substitute the real currency?”.

What’s next? A global creative cryptocurrency to promote education, culture and arts worldwide

These days Schwartz is busy creating a CC that goes beyond the regional — the project was launched in Brazil last November, although at its most initial stage. “We lack a monetization platform for creative processes which already exist [in our society]. [The world] should be more democratic rather than autocratic and technocratic”, — he says, while stressing the popularity of state-reinforcing technologies like mass surveillance in modern society as well as fluid stability of global currencies over the past few decades.

The platform called DarVoz got inspiration from UNESCO’s MIL CLICKS’ (a project Schwartz joined in 2006) agenda, which is based on the idea that responsible consumption and production of online content worldwide could be rewarded with digital currency. As professor explains:

“We’re working on the idea that we can share digital toolkits that may include the creative currency. It’s a concrete example of this idea of a great creative community that is leveraged by universities, artists, citizens into a whole new sphere for information exchange and local development. Whilst it doesn’t involve governments, it’s not against [the idea of] governments”.

Why not issue a new coin straight away, while it seems so easy to do in the world where even memes almost accidentally become successful currencies? Well, according to Schwartz, it contradicts the whole idea. “It makes no sense to go for an initial coin offering (ICO) if you don’t have the other ICO, which is Initial Community Organization. You need [to establish an] organic connection between community and the currency first. The idea is not that we want hundreds of new ICOs, we’re aiming at a currency system with diversity being an important part of its dynamics. It’s really complementary, it’s not antagonistic to the existing currencies and infrastructures. We’re not going backwards in terms of globalization — that’s for trade barriers advocats. Instead, we’re going forward, towards more interconnectivity but with a balance between the technological and the humanitarian”.

Acknowledging that conservative governments of the world wouldn’t be particularly happy about the idea that a regular, state-approved currency can be in any form substituted by decentralized ones, Schwartz seeks support among more open-minded institutes: universities, research groups and outreach projects.

“So far we haven’t leveraged enough support… there’s a funding issue here” admits Schwartz: “In order to develop something like a running currency, confidence is required. To get that confidence, you have to be trustable as an institutional body or as an organization. We still haven’t been able to convince any policymaker". However, DarVoz has found an alternative solution: these days Schwartz and his team are discussing their concept with other universities all over the world: "That way, we should be able to have a global social currency that connects different cultural and educational projects”.

To run such currency, DarVoz needs a platform. Schwartz’s team is currently negotiating with Holochain, an open source framework for peer-to-peer applications. “We’re going to hold a meet up with their team to brainstorm at the end of March. [But the] political situation in Brazil is very unstable at this point. In 21 years that I’ve been working with those projects at University of São Paulo this is the worst time to start” the professor laughs. Some caution wouldn’t hurt, Schwartz believes:

“It’s important to hold an open dialogue with the central bank as to what kind of currency that is and what kind of sphere it’s connected to… all kinds of walls are being built these days. It’s kind of like going back to the middle ages in that sense”.

The currency’s purpose is part of its value, as opposed to regular currency, which, according to Schwartz, “is useful for whatever — [with regular money] you can buy a gun, you can buy a glass of water”. His team is looking to achieve NGO levels of transparency — the activities circulating within the currency must be traceable and accountable for in order to be monetized. Such digital records are supposed to be stored within the Blockchain-type backbone of the currency:

“It naturally evolves into the public sphere of shared audiovisual content … Say, you held a lesson with 15 kids in Bolivia and took care of the garden around the church. You connect to the global network and share the record of your activities… Basically, it’s about how you translate knowledge into acknowledgment on a democratic [platform]”.

Despite the complexity of his concept and low interest among policy-makers and investors, Schwartz remains optimistic. “This is a learning process. The issue here is not about the currencies, it’s about all countries reaching a new level of understanding that can be at least comparable to the post-war welfare consensus. We’re now probably living through the last stages of the crisis. A new consensus is very likely, because we have much more tools to discuss, share and use. However, on the other hand, those very tools are very useful for control, censorship and oppression as well. You can use a knife to kill or to slice the bread and share”.