A third transaction with a transaction fee worth thousands of Ether has confirmed as experts suggest foul play again.

6074 Total views
31 Total shares
Listen to article
0:00
News
Own this piece of crypto history
Collect this article as NFT

A third intriguing transaction has taken place, this time with a 2,310 Ether (ETH) transaction fee valued at over $540,000 at time of press. Occurring less than 24 hours after the first two transactions with over $5.2 million (10,668.73 Ether each) in fees were processed on the Ethereum blockchain, this new transaction has raised the question of whether there is more than one person involved. 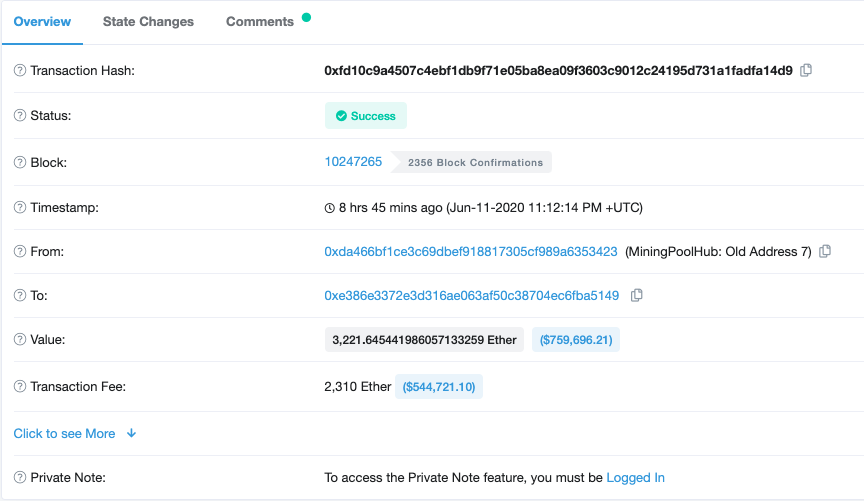 Unlike the previous two transactions, this one had a substantial transaction volume of 3,221 Ether with a value higher than the fee. Adding to the controversy, this was not sent from the same address, but brought an entirely new address into the equation, one that had (MiningPoolHub: Old Address 7) next to its name.

This new address had many smaller transactions going out to the same recipient around the same time, however all other transactions were only a couple of Ether with fees varying from 0.0005 to 0.29 Ether. Normally 0.29 would be an expensive transaction, however, they are barely noticeable compared to the one with fees exceeding half a million.

Founding partner at Primitive Ventures Dovey Wan has taken part in the conversation, suggesting this is less likely to be a mistake and looks like a message:

“WOW another abnormal ETH transaction with over 2K ETH fee just emerged, following the previous two incidences each with over 10K ETH fee. This to me is NOT a bug, more like a MESSAGE. A wild guess is certain exchange/wallet/ETH services is being ‘kidnapped’ by hacker.”

Lots in but none out

The receiving address has over 2,000 transactions dating back to three years ago, with almost all of them transferring minimal amounts of Ether into the wallet. Its only outgoing transfers occurred more than two years ago, the last of which participated in the EOS token sale.

The address also has received at least four other transactions over the last 12 months with transaction fees in the thousands of dollars.

A high fee is due to the fact that hacker’s gas price is a function of the amount of stolen funds. pic.twitter.com/GMh9Ob6YFa