As crypto regulation is accepted in UAE blockchain projects could stand to benefit.

The Securities and Commodities Authority (SCA) in the United Arab Emirates has drafted a resolution on regulating crypto assets, providing greater clarity for crypto-related projects in the Middle East nation.

With the focus usually on China, Japan or the United States, the Middle East is an area that doesn't often get the attention it deserves when it comes to blockchain and cryptocurrencies. However, barring a few highly restrictive countries, such as Iraq and Kuwait, the region generally exhibits a very progressive and supportive stance when it comes to the blockchain industry.

Speaking to Cointelegraph, Sukhi Jutla, a blockchain author as well as a Financial Times and Google Top 100 European Digital Champion, commented that by drafting this resolution, the UAE is sending a positive sign to the world, adding that:

“They are signalling that they are open to exploring this area and by creating guidelines they are giving more reassurance, confidence and stability to businesses owners who may want to enter this field.”

This move by the UAE could potentially lead to other nations moving in a similar direction, which would help remove a lot of the obstacles that the industry currently faces. She went on, saying:

“The UAE has been smart enough to understand that this innovation will grow in years to come and they don’t want to miss it. I wouldn’t be surprised if the UAE becomes the leading nation in this space just as they did with the oil and property space."

Related: From Qatar to Palestine: How Cryptocurrencies Are Regulated in the Middle East

While countries like Turkey, Iran and Israel are in the process of investigating the advantages of blockchain technology, the UAE, along with both Bahrain and Saudi Arabia, is leading the charge when it comes to positive crypto and blockchain legislation. The UAE, in particular, already hosts several blockchain initiatives that stand to benefit significantly from the new regulations.

As reported at the start of October, the Dubai Chamber of Commerce announced a partnership with one of the UAE's largest state-owned banks, Emirates NBD. The agreement aims to help drive progress of the Dubai 10X initiative, which hopes to digitize the trade process in what has become known as the "Digital Silk Road." Developed in collaboration with Dubai Customs and the cargo handling service DP World-UAE, the project is scheduled to go live in 2020.

The Digital Silk Road is not the first blockchain-based trade finance project to be developed in the UAE. In April 2019, local blockchain startup Perlin partnered with the International Chamber of Commerce (ICC) to form the ICC Blockchain/DLT Alliance. The Paris-based ICC is now the world's largest business organization, boasting 45 million members. The partnership with Perlin reportedly represents the single largest exposure of blockchain technology to global business, reaching companies in 130 countries around the world. The Dubai Chamber of Commerce officially joined the project in June this year.

The Dubai telecommunications service provider Du has partnered with Avanza Innovations to develop the country's first financial document exchange platform based on blockchain technology. The platform is built on Du's proprietary “Blockchain Platform as a Service,” a shared environment that was created last year to host blockchain-based proof-of-concepts put forward by companies hoping to adopt the technology.

The document exchange platform, dubbed the "Bank Trust Network,” will serve as a means for banks and other financial institutions to safely and securely share digital paperwork. Historically, it's been challenging to share sensitive financial information over telecommunications networks due to the high potential for fraud or interception.

The nature of a blockchain-based system provides a network that is intrinsically resistant to corruption, theft or alteration. Going paperless also helps Dubai to stick to its environmental commitments and sustainability goals.

The first customer to join the Bank Trust Network was the independent investment and financial services firm Finance House. Headquartered in Abu Dhabi and with offices in Dubai, the company is recognized as one of the first independent financial firms to be established in the United Arab Emirates.

In September 2019, Dubai's National Bank of Fujairah (NBF) joined the international blockchain-based trade finance network Marco Polo. Launched in 2017, the network brings together some of the leading financial institutions and technology giants in the world, including Mastercard, Natwest, Microsoft, Oracle and Bank of America.

Created as a collaborative effort between blockchain development firm R3 and open finance platform TradeIX, the Marco Polo network has proven to be an impressively fast-growing trade and capital finance network. Developed on the popular and highly successful R3 Corda enterprise blockchain technology, the network is focused mainly toward large corporate clients but can support small- and medium-sized businesses too. The central part of its application software, the Marco Polo Platform, is built and licensed through TradeIX's open framework, making it more easily accessible and customizable for clients.

NBF's head of global transactions services, Subramanian Krishnamurthy, noted how the partnership complements the bank's desire to explore emerging technologies such as blockchain:

"We are thrilled to join the Marco Polo Network and support the collaborative effort to create and advance these new technologies in the trade finance ecosystem. As a dedicated financial partner, we will continue to leverage forward-thinking platforms that respond to our clients' needs, enhance their customer experience and add value to their businesses."

The platform is a powerhouse of distributed technology for both trade and supply chain finance, offering products to support receivable discounting, factoring and payment commitment. The open model means any member can develop and improve upon the system, with the benefits of distributed ledger technology creating a real-time flow of data connectivity that reduces typical failure points.

As a member of the Marco Polo network, the National Bank of Fujairah has access to the Universal Trade Network, an international initiative created by Marco Polo with an aim to develop blockchain trade finance standards. The network hopes to improve interoperability between global blockchain networks from around the world.

The Middle East and North Africa region reportedly has the second-highest rejection rate for trade finance applications. While still in its early development stages, the UAE Trade Connect platform hopes to eventually develop solutions to these issues with the additional integration of artificial intelligence and machine learning.

Trade Assets is a Dubai-based blockchain marketplace launched in February 2019 as part of the Dubai Multi Commodities Centre, a “free zone” company initiative. The DMCC was formulated in 2002 by the government of Dubai to provide financial infrastructure and stimulate interest in the global commodities trade.

Since its inception, the Trade Assets platform has been adopted by RAK Bank in Dubai, Yes Bank in India, Banque Misr in Egypt and 22 Bangladeshi banks including Mercantile Bank, Dutch Bangla, Prime Bank and Dhaka Bank.

The marketplace aims to provide a platform through which banks can capitalize on the $1 trillion secondary trade market that exists due to the limited amount of trade finance banks are willing to carry on their books, as less-desirable portfolios are often sold to make space for newer clients. While this can be a profitable exercise for both sellers and buyers, it is also a disorganized and time-consuming process.

The Trade Assets platform aims to reform the slow and antiquated system that currently supports the secondary trade market with a blockchain-based digital marketplace. The solution offers a fast, highly secure and transparent system that is accessible to all and easy to integrate into any existing framework.

Co-founder and chief marketing officer Sumit Roy, an ex-Deutsche Bank exec, is optimistic about the company's future. He believes it has a good chance of attracting a wealth of initial clients and will achieve recovery of investment by the end of its third year of operation.

According to a press release on the launch, he said: "Trade Assets will offer exceptional economies of scale and ROI and will acquire over 100 clients in 2 years, aiming to reach $1 billion in transaction volumes."

The Silsal shipping and logistics blockchain

Abu Dhabi Ports subsidiary Maqta Gateway launched its Silsal blockchain project in October 2018 with the intention to provide greater security, transparency and efficiency. The project was tested in collaboration with major shipping and logistics company Mediterranean Shipping Company (MSC) to evaluate its capabilities.

The Belgian Port of Antwerp was one of the first international ports to partner with Maqta Gateway and MSC to test the Silsal blockchain.

With the creation of the project, Maqta Gateway envisioned a system that can support the seamless exchange of shipping documentation between multiple international ports securely and autonomously. In addition to documentation exchange, the Silsal blockchain gives port authorities the ability to record transaction details on a digital ledger that is transparent and accessible across the trade industry.

Just a tip of an iceberg

While the above represents a large section of the UAE's blockchain enterprises, it is in no way a comprehensive list. In the first quarter of 2019 alone, UAE-based blockchain startups raised $210 million, making the country the largest beneficiary of blockchain investment in the world. 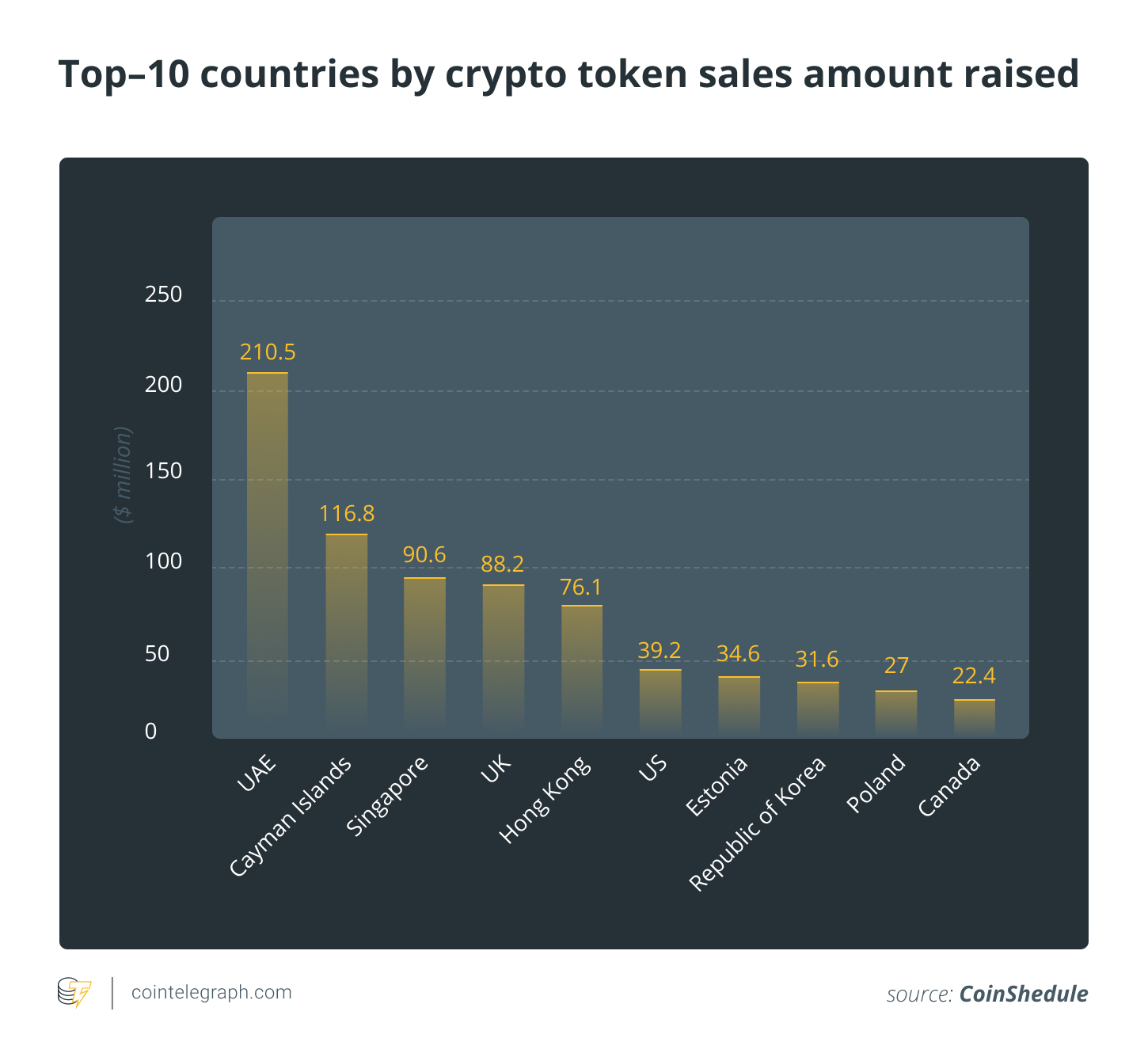 Now, with favorable crypto legislation, are we are likely to see the UAE emerge as a leading blockchain nation in 2020? Miles Paschini, founder and director of crypto investment app B21, commented to Cointelegraph that:

“Clear regulation will enable this jurisdiction to be in a good position to become a regional leader. With this said, the devil is in the details, regulations can't stifle innovation. This will be a delicate balance of allowing innovation to occur while protecting consumer and sovereign interests."