Texas ups its aspirations to become the go-to place for crypto in the U.S., forming a new blockchain council and highlighting the state’s mining capabilities.

37461 Total views
50 Total shares
Listen to article
0:00
Analysis
Own this piece of history

Everything is bigger in Texas, and now the state with the second-largest geographical area in the United States is aiming to prove that it can lead the way in blockchain innovation.

While well-known companies like Hedera Hashgraph and Bitmain have already established a strong presence in Texas, the state has recently formed its own blockchain committee. Known as the Texas Blockchain Council, the organization was established as a trade association, or business league, serving as a nonprofit intended to make Texas a leader in national blockchain growth, education and business development. The council’s president, Lee Bratcher, told Cointelegraph that Texas will soon become one of the most favored jurisdictions for U.S.-based blockchain businesses and investments:

“What states like Wyoming have done for blockchain innovation is truly amazing and we certainly want to emulate that. We just want to come behind these states with Texas’ trillion-dollar economy, which will ultimately allow us to become the next big place where blockchain innovation happens.”

Bratcher further noted that a number of Texas-elected officials are in support of the initiatives being put forward by the Texas Blockchain Council. These objectives include passing legislation; raising awareness for Texas blockchain companies or other industry verticals that utilize blockchain; devising use cases that will launch independently in partnership with the committee and council members; and providing educational and research opportunities for Texas academic institutions.

Is a trillion-dollar economy enough to drive innovation?

A big factor that makes Texas ripe for blockchain innovation is the state’s $1.9-trillion economy, which is the second-largest in the U.S. — behind California. With such a large economic footprint, along with support from key Texas government officials, Texas may very well become the nation’s next blockchain hotspot. Texas Representative Tan Parker, one of the Texas Blockchain Council’s legislative champions, remarked in a statement shared with Cointelegraph:

“Texas has a long history of technological innovation and free-thinking entrepreneurs. From the invention of handheld calculators by engineers at Texas Instruments to the development of 3-D printing at UT Austin, Texas has always been on the forefront of technological change. We’ve now set our sights on becoming the jurisdiction of choice for investors, entrepreneurs, and enterprises to build and deploy blockchain technologies applications and other emerging tech innovations.”

Yet even with its trillion-dollar economy, 2018 data from public policy organization “The Brookings Institute” showed Texas to be a “reactionary” state in terms of blockchain engagement. 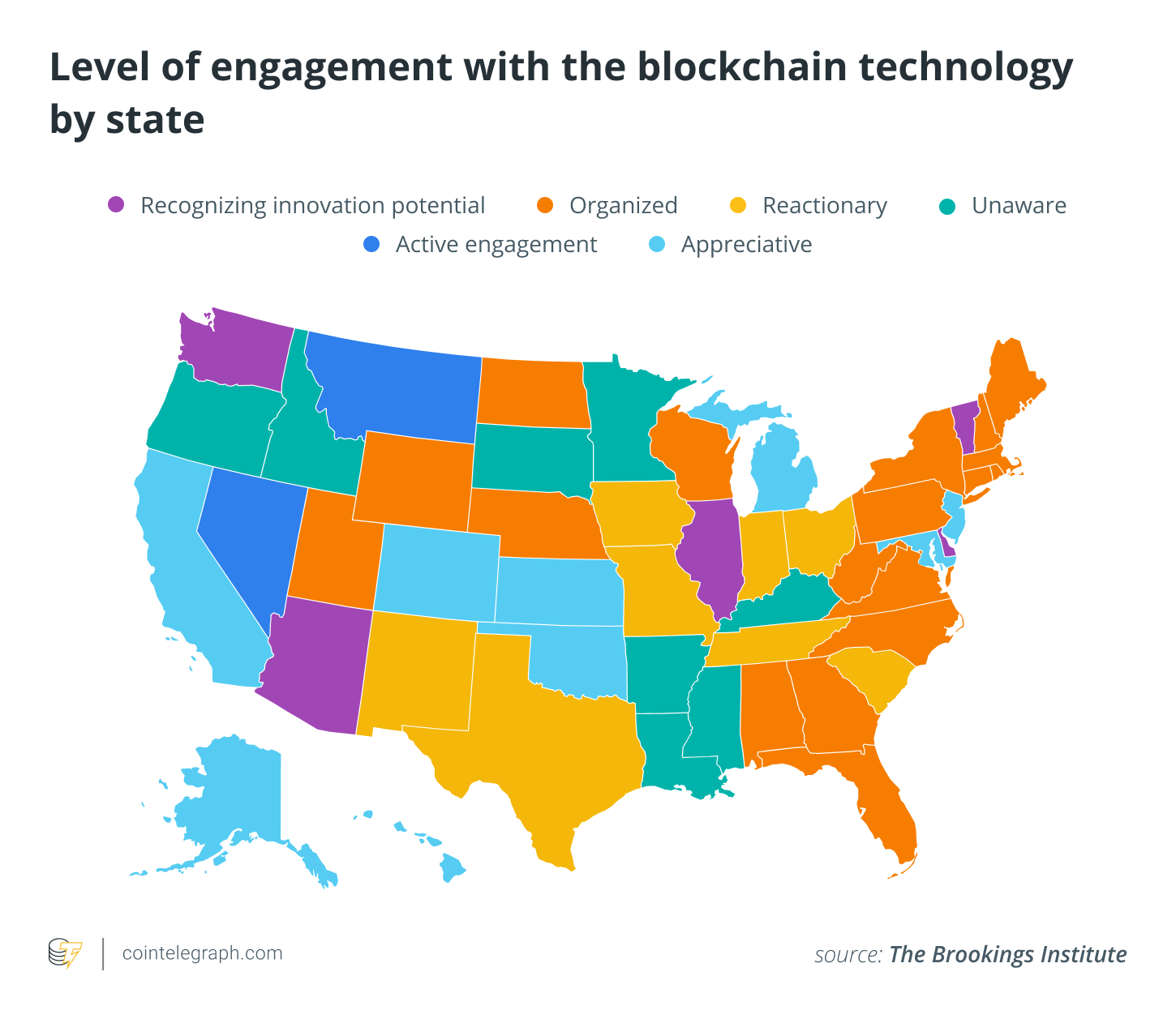 Based on these findings, Bratcher, along with other innovators in Texas, has seemingly acknowledged that the Texas business community hasn’t had a unified enough voice in the Texas Legislature in relation to emerging technologies. Commenting on states like Wyoming, Arizona and Delaware, which have paved the way for thoughtful blockchain regulation and legislation in the U.S., Bratcher noted:

“If Wyoming can do it, why can’t Texas? Texas brings to bear a nearly 2 trillion-dollar economy, world-class research institutions, a tech- and energy-oriented workforce, and an innovative spirit that can lay the groundwork for a transformation in the way we exchange value and conduct commerce.”

It’s also important to point out that innovation at a state level is just one piece of the puzzle for the Texas Blockchain Council. According to Bratcher, a lack of innovation from states like Texas, California and New York has hampered blockchain development for the entire nation. He noted that both the U.S. Congress and the Securities and Exchange Commission have been looking toward the nation’s states to drive innovation for a national blockchain strategy, saying:

Although the Texas economy and Congressional Delegation is much larger than other states, a number of legal steps are still required in order for the state to drive blockchain innovation. Caitlin Long, a blockchain pioneer and member of Wyoming’s blockchain committee, told Cointelegraph that the most important step any state can take when it comes to blockchain adoption is to clarify the legal status of digital asset transfers under state commercial law: “Without doing this, almost everything else could be built on a foundation of sand because commercial law is the ‘protocol layer’ of the legal system, so it’s a crucial foundation for every ‘application’ built upon it.”

Long further pointed out that while existing commercial laws are already being established regarding digital asset transfers from one intermediary to another, it’s estimated that only 20%–25% of Bitcoin (BTC) and Ether (ETH) are held in a custodial manner. When it comes to the other 75%–80% that are held in self-custody, Long explained:

“Wyoming is the only state to address the legal status of these self-custodied assets thus far. The good news is that there’s a lot of work underway to fix this issue — both in the states and collectively at the Uniform Law Commission. If Texas wants to join Wyoming as a leader, this is the first place it should start — don’t wait for the national process to grind to a conclusion, which will take years, and jump out ahead. South Carolina and Missouri are looking at doing this as well. So, Texas may already be supplanted as a fast follower.”

In addition, Long noted that Texas, like Wyoming, has no state income tax. Therefore, she recommends that Texas clarify that digital assets aren’t taxed in Texas. Finally, Long pointed out that Wyoming’s special-purpose depository institution law, or SPDI, provides a big competitive advantage for the state. An SPDI functions similarly to a regular custody bank, only without the ability to lend. SPDI banks regulated by the Wyoming Division of Banking can provide services for digital assets without oversight from the U.S. Federal Deposit Insurance Corporation. Long commented that “standing up a new type of bank charter will take a minimum of 2–3 years, whether at the state or national level, so Wyoming has a big lead.”

Unsurprisingly, Bratcher is aware that innovating in Texas will be challenging. However, he explained that the council is being judicious and working with partners who want to champion blockchain technology in a politically sensitive way:

“Many of our members know how to speak to officials in the Texas House and Senate and can translate this industry into the political vernacular these individuals are familiar with. Of course, we are being more conservative because this is a heavier lift in Texas. We are currently shooting to pass three bills for the session starting in January and are talking to legislators about the bills in development.”

Politics aside, one major advantage Texas has over almost every other state in the U.S. is access to cheap electricity — a unique characteristic that is quickly catching the attention of major cryptocurrency mining operations.

In October 2019, Chinese cryptocurrency hardware manufacturer Bitmain opened what it claimed to be the “world’s largest” facility for Bitcoin mining in Rockdale, Texas. Shortly after this facility was established, German tech company Northern Data AG announced plans to build a large mining facility also in Rockdale.

According to an MIT Technology Review article, Northern Data plans to devote a full gigawatt (1,000 megawatts) to crypto mining. To put this scope into perspective, a recent estimate from the University of Cambridge shows that Bitcoin’s network is currently using just over five gigawatts of power. Bratcher explained that Texas will most likely see an increase in hash power and hash rates due to the state’s cheap electricity, natural gas and boom in the development of wind power. “We’ve got a lot of cheap power in Texas and have been talking to some companies already about the Bitcoin mining process here,” he said.

William Szamosszegi, the CEO and founder of U.S.-based mining operation Sazmining, told Cointelegraph that the firm has a current joint venture project in Beeville, Texas. Szamosszegi further explained that the cheap, abundant power in the state can generate larger profit margins for miners, adding that energy production is deregulated in Texas, which means there are fewer restrictions on the grid compared to other states:

“There’s less red tape around crypto and crypto mining in Texas, which means there are fewer barriers to entry and higher overall crypto acceptance, making it easier for miners to operate. Lastly, there is an emerging trend of crypto miners becoming energy producers themselves or partnering with existing energy producers. The more favorable regulatory environment in Texas makes it the ideal state to launch these kinds of operations.”

Also interesting to point out is that a survey released on July 16 by Fidelity and crypto research firm BitOoda revealed that China is now only responsible for 50% of Bitcoin mining, rather than 65%. Findings further show that 14% of mining now comes from the U.S. Bratcher noted that the council is aware that Texas could play an important role in helping the U.S. lead in innovation:

“This is clearly the next race for innovation. Just as Texas played an outsized role in helping the U.S. win the space race, Texas elected officials, state agencies, business, universities and entrepreneurs are teaming up to put a man on the moon in the race for dominance in blockchain innovation and the coming internet of value.”