Even in a red market, solid gains can be made. Here’s how Cointelegraph’s unique trading tools highlighted the assets with the strongest historical outlook.

Last week was challenging for crypto traders, with Sept. 24’s FUD-triggering crypto-ban news out of China wiping out much of the gains that investors had managed to rake in earlier in the week. Between Sept. 18 and 25, the top 100 altcoins shed as much as 14.4% of their aggregate value, while Bitcoin (BTC) lost 12.5%.

The number of altcoins posting double-digit returns was unusually low as well. Data from Markets Pro, Cointelegraph’s subscription-based data intelligence platform, shows that only eight assets out of the hundreds tracked gained more than 10% against the United States dollar.

While trading is an activity marked by a steady flux of gains and losses, how can investors spot the coins that are well-positioned to weather the storm ahead of time?

The top performers of a tough week

The table below lists the eight altcoins that managed to secure a robust return even amid the sea of red that swept through the market last week.

COTI continued its winning streak, boosted by the recent release of the Coti Treasury white paper, the asset’s listing on Crypto.com and anticipation of a new stablecoin partnership with Cardano.

CELR’s momentum accelerated following the launch of Celer Network’s cross-chain cBridge 2.0, which is designed to facilitate the transfer of digital funds between major blockchains.

The third best performing asset of the week, Trace (TRAC), is the native token of OriginTrail, a blockchain ecosystem and protocol that aims to improve global supply chains by providing infrastructure for trusted data exchange. The token’s valuation has recently been growing on the back of a series of bullish developments, such as United States home improvement business Home Depot’s adoption of the SCAN Trusted Factory solution built on OriginTrail. 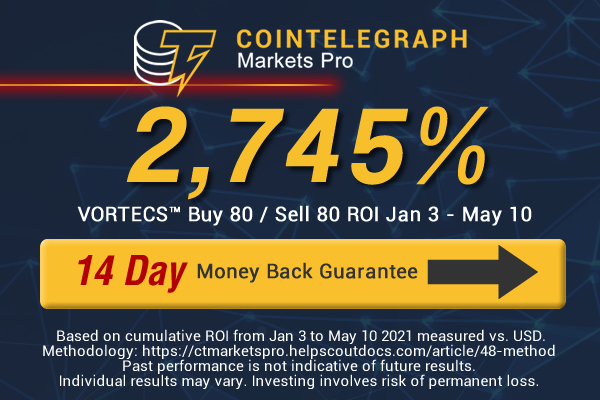 The model considers a host of quantitative indicators — including market outlook, price movement, social sentiment and trading activity — to generate a score that assesses whether the current conditions for a coin are historically bullish, neutral or bearish.

Here is how it worked for TRAC and REN last week.

VORTECS™ caught the early signs of a breakout

The VORTECS™ model is optimized to detect patterns of social and market activity that in the past have consistently appeared 12 to 72 hours before the coin’s price shot up. A score of 80 or higher indicates that the observed conditions have a strong history of preceding price increases.

The price of TRAC was volatile throughout the week against mostly favorable — low to mid-seventies — VORTECS™ Scores. The peak score of 81 briefly flashed late on Sept. 21 (red circle in the chart), indicating the model’s rising confidence that the patterns of market and social activity around the coin looked historically bullish.

Despite a price downturn that had begun shortly after the peak VORTECS™ Score was registered, TRAC soon saw its fortunes reverse, kicking off a two-day rally from $0.37 to $0.56.

The price of REN had been steadily declining in the first half of the week against the backdrop of a sequence of very strong VORTECS™ Scores.

REN eventually bottomed out at $0.70 before starting to climb again, and the week’s second sequence of VORTECS™ Scores registering 80-plus showed up shortly thereafter. Savvy traders know that an asset whose VORTECS™ Score remains high for a long time — even while the price is flat — can present an excellent profit opportunity.

Digital assets do not always behave in ways similar to what has been observed in the past, especially during market downturns.

After all, out of last week’s eight best performers, only two coins generated familiar bullish patterns before their prices exploded. However, the additional insight that the VORTECS™ Score supplies to traders can be indispensable in a situation when very few coins can be expected to beat the struggling market.

Cointelegraph is a publisher of financial information, not an investment adviser. We do not provide personalized or individualized investment advice. Cryptocurrencies are volatile investments and carry significant risks including the risk of permanent and total loss. Past performance is not indicative of future results. Figures and charts are correct at the time of writing or as otherwise specified. Live-tested strategies are not recommendations. Consult your financial advisor before making financial decisions.