15917 Total views
90 Total shares
Listen to article
0:00
Market Analysis
Own this piece of crypto history
Collect this article as NFT

The latest research from ZUBR derivatives exchange published June 29 found that participation from retail investors is increasing despite the longstanding narrative that institutional adoption would be required to propel crypto prices higher.

With the recent halving being nothing more than a distant memory and the Bitcoin (BTC) price lingering in the $9,100 range, the current price action is far from the post-halving surge that many retail and institutional investors expected.

Despite the lackluster price action, a multitude of bullish factors like record growth in the number of Bitcoin whales, a new all-time high in the number of wallet addresses containing less than 1 BTC, record BTC outflow from exchanges, and Bitcoin recently achieving its third-best Q2 performance ever show remarkable growth of investor participation in the top-ranked digital asset.

Moreover, increasing Bitcoin demand from Grayscale Investments, Square and other companies suggest that demand is coming from both institutional investors as well as retail. 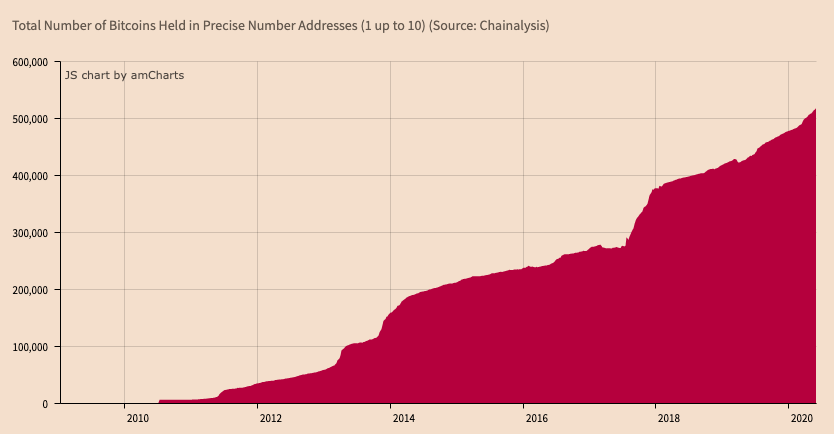 Meanwhile, sourcing data from Chainalysis, ZUBR observed that in April 2020, wallet addresses containing 1 to 10 Bitcoin had risen past 500,000 and that “these addresses have been growing every month since the start of the 2018 bear market after the price of Bitcoin hit its peak.”

“By the time the next reward era comes around in 2024, retail could potentially account for eating up over 50% of the physical supply.”

In 2020, much discussion has been dedicated to the perceived correlation between equities markets and Bitcoin. As markets tanked in March 2020, risk-on assets like Bitcoin swiftly followed suit.

Typically, a sharp drop in value such as the 50% Bitcoin price drop that occurred on March 13 would dampen demand alongside the downturn in equities markets. But data from ZUBR shows the opposite.

Even as the Bitcoin price dropped more than 50% on Black Thursday, demand from retail investors remained strong and there was no discernable decrease in the amount of Bitcoin held in wallet addresses associated with retail investors.

Currently, 900 Bitcoins are mined each day, and this figure is slated to drop to 450 by the next halving in 2024. ZUBR forecasts that by the 2024 halving, retail demand could exceed 250 BTC per day on average, or half of the new available daily supply.

What’s more, this retail demand figure could actually exceed ZUBR’s estimate as their data only focused on wallet addresses with whole numbers instead of including accounts with fractional BTC holdings.

While it’s difficult to forecast Bitcoin’s future price evolution, it is clear that retail investors are not being pushed out of the sector by the influx of institutional funds.

If the forecasts by ZUBR and Chainalysis come to fruition, smaller investors will actually play a larger role by 2024 in Bitcoin’s network and value dynamics.