$300 ETH? Ether Looks to Be Next Major Crypto to Follow Cardano

Ether's price is set for a major breakout, and hitting as high as $330 next shouldn’t be ruled out.

Recently, several altcoins have been showing strength. A few good examples are Theta Token (THETA), Zilliqa (ZIL) and Elrond (ERD). However, the large caps are lagging heavily, and the only large cap performing well has been Cardano (ADA).

As smaller-cap altcoins begin to lift off, some investors might be wondering exactly what is needed for a significant surge in the large caps? Does the market need confirmation from Bitcoin (BTC), the top-ranked digital asset on CoinMarketCap, or is the top altcoin Ether (ETH) the signal? 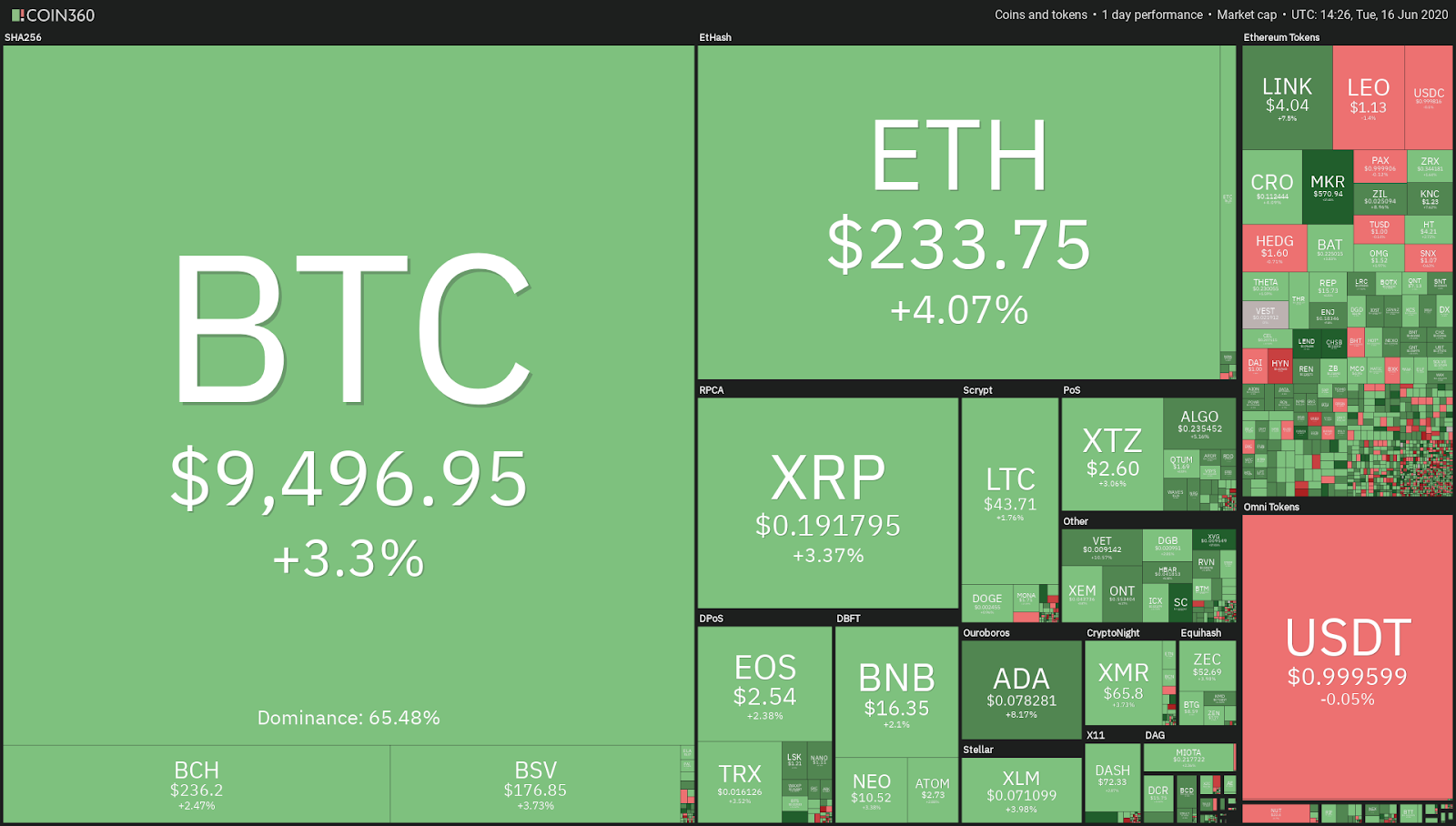 ETH/USD rallied from $195 to $250 in the last month, but it also corrected alongside Bitcoin in the previous days. As Bitcoin's price pulled back this week, Ether endured a test, and the green area between $271–$222 is the zone that is needed to hold as support. 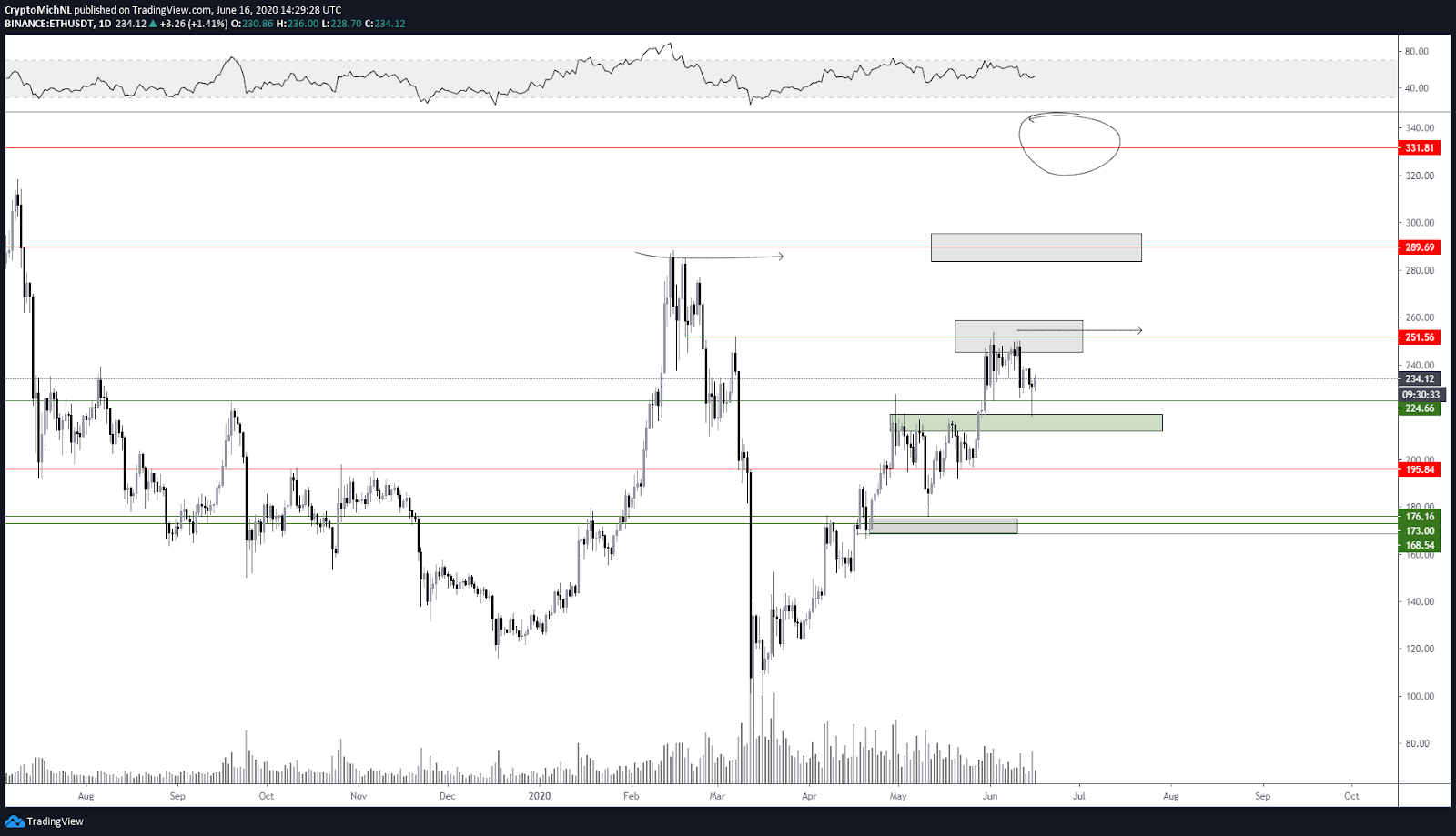 As shown on the chart above, the bounce succeeded and confirmed that the $217–$222 level is a support level, whereas it was resistance throughout May.

The chart is also showing an apparent resistance at the $250 level, where a range appears. This range has support between $217–$222 and resistance at $250. As the range is determined, the conclusion can be drawn that a breakout leads to a trend.

ETH/USD has been in an uptrend since the crash on March 12, after which it’s more likely to see further upside above $250. 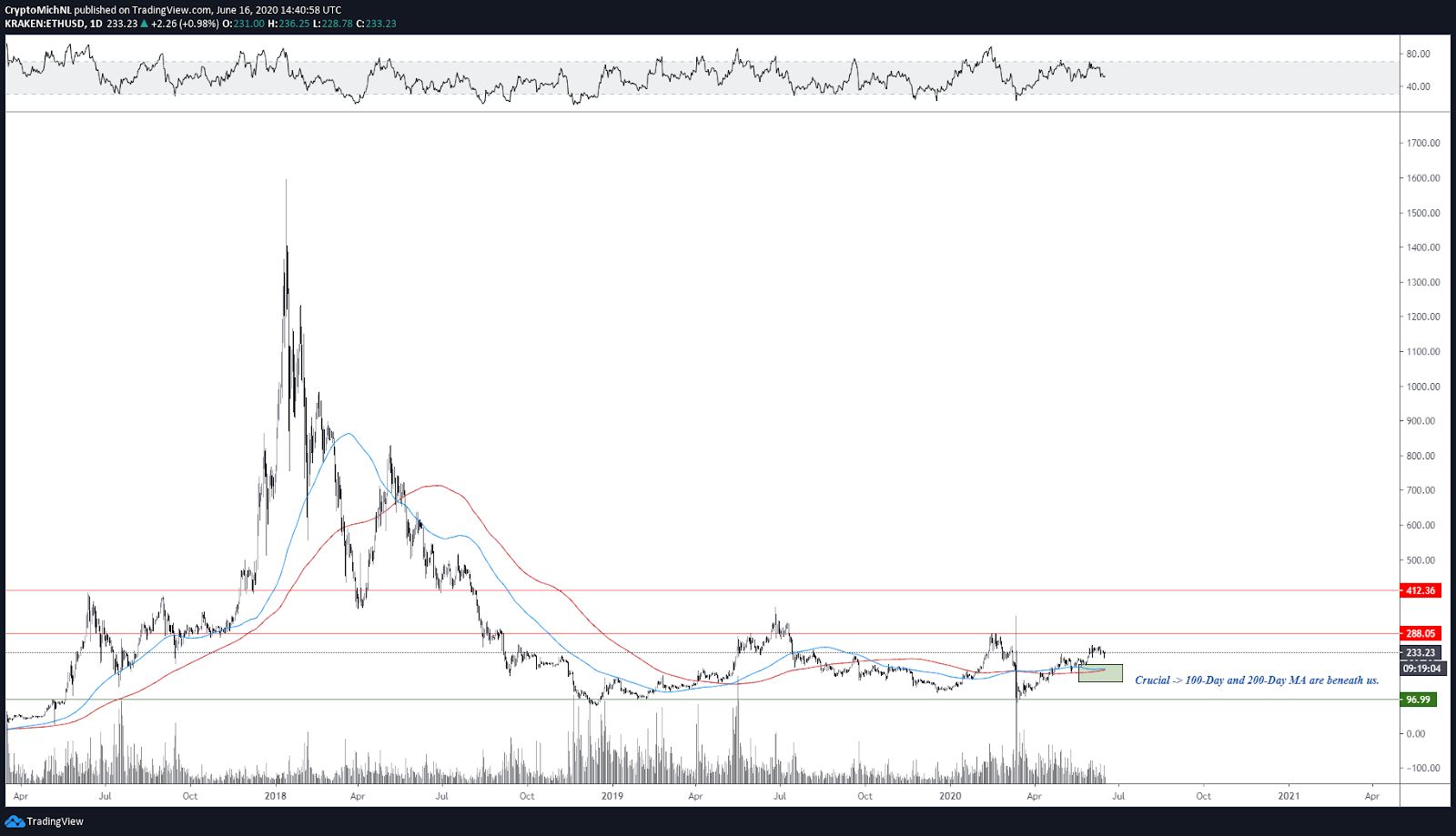 The bigger picture is showing a clear accumulation period for ETH/USD, and since July 2018, the price of Ether has been hovering between $100 and $300 — a range of two years — ready to break out.

The longer such a range sustains, the heavier the breakout likely becomes. Additionally, such a long accumulation period warrants an excellent risk/reward opportunity as well.

What’s crucial in this chart? The 100-day and 200-day MAs are beneath the current price, which warrants support and warrants further upward momentum.

Another argument for further gains comes from the increased volume inside this accumulation. As is often said, volume precedes price, through which accumulation is often spotted by an increase in volume. Ether is currently showing this signal.

The total market capitalization of cryptocurrencies is showing a clear breakthrough in the 2018 support level. The $215$222 billion levels have been support earlier in the cycle and have again flipped to become support. 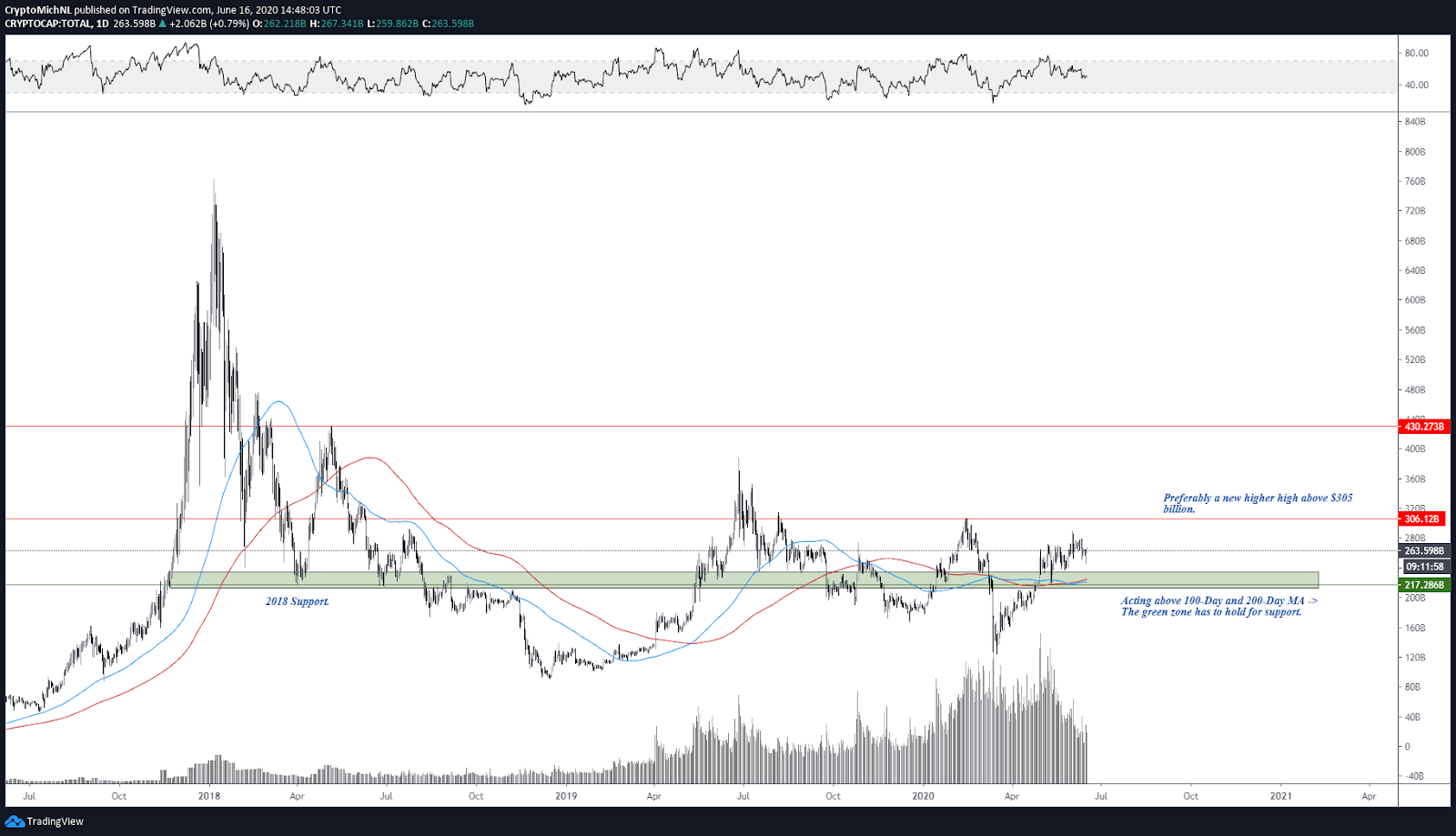 Similar cases are found in the market capitalization and ETH/USD charts. Increasing interest through rising volume is also a signal that accumulation is taking place.

The main priority for the total market capitalization would be a breakout above the $305 billion resistance, as that would indicate a new higher high and another positive bullish argument for the start of a massive new cycle. 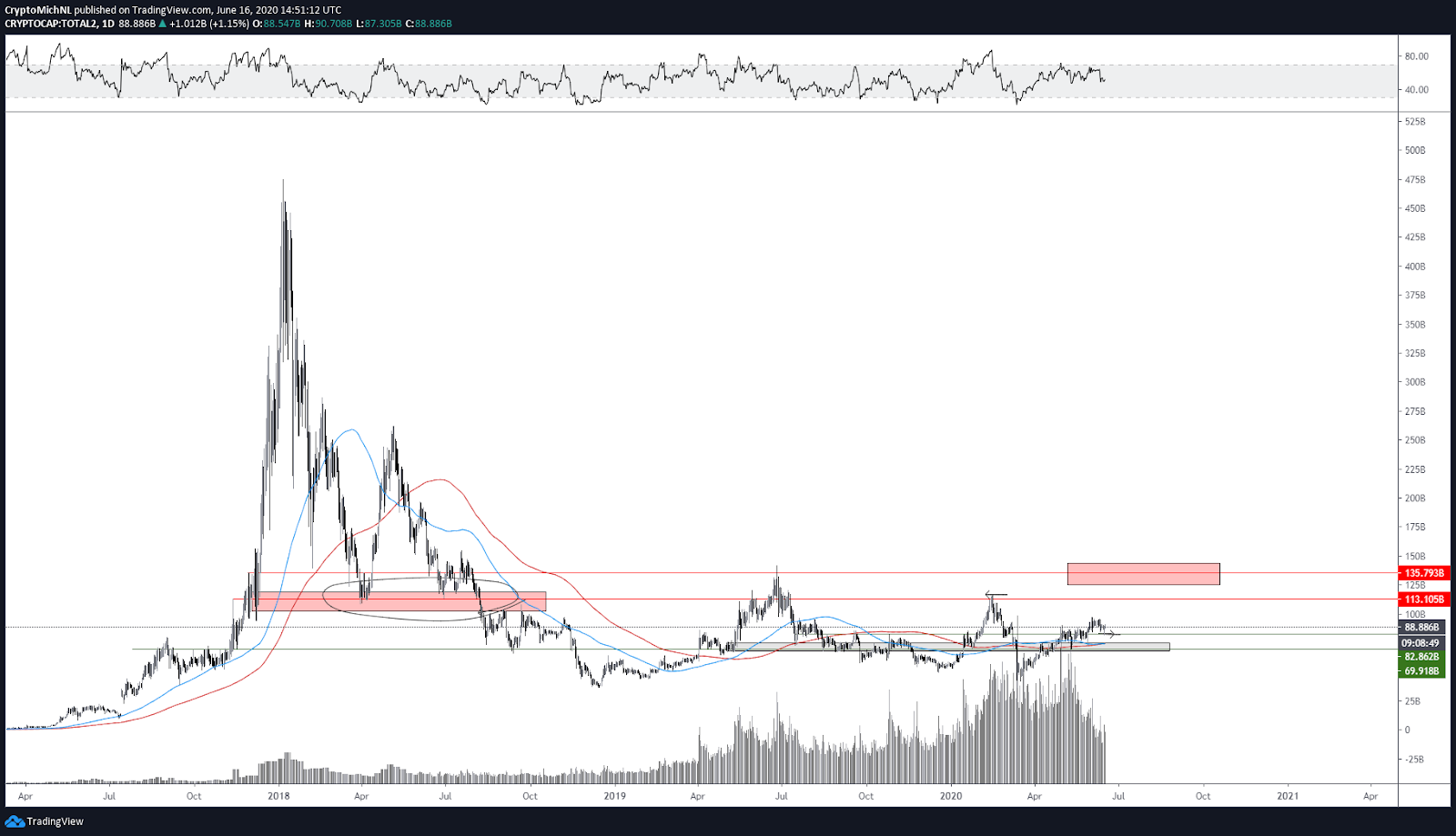 What’s crucial again is that the 100-day and 200-day moving averages need to provide support in the same way they did throughout the entire cycle before the peak in December 2017.

If that happens, a breakout is likely above $113 billion and a sustainable rally toward $135 billion or even $200 billion. To date, the resistance at $113 billion has been tested several times.

As a rule, the more a resistance gets tested, the weaker the level becomes. Another test would likely create enough strength for a breakthrough and a surge to the upside.

In that regard, $200 billion is not an impossible level to expect in the next rally. 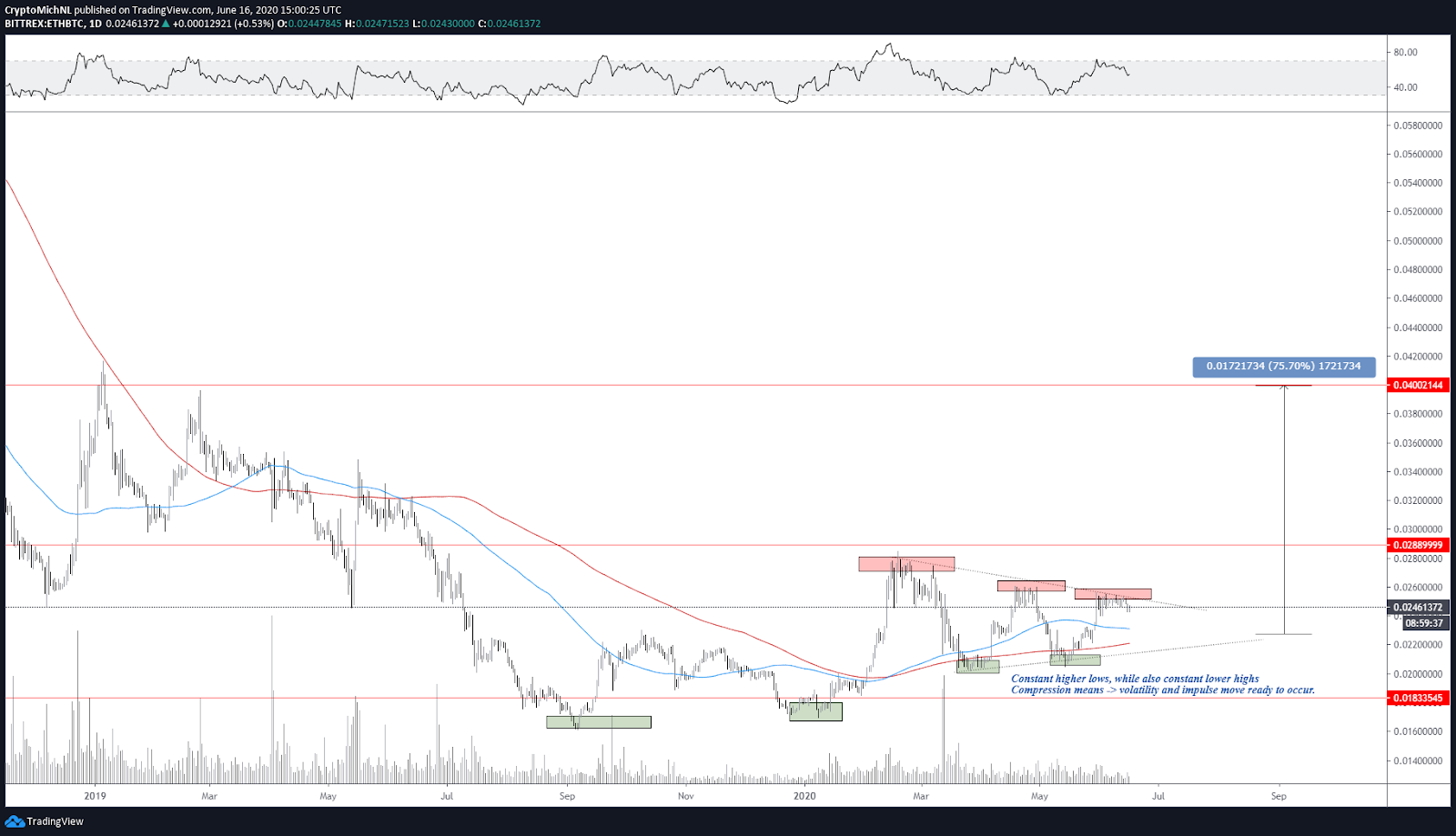 The ETH/BTC chart is currently showing compression, but what does this mean? Basically, it means that the price is moving within narrowing ranges, and as the price moves inside these narrow ranges, a breakout typically results in a heavy volatile move.

In the case of Ether, it’s likely to expect this breakout to occur to the upside. A similar accumulation range is happening here, through which the BTC pair is hovering above the 100-day and 200-day MAs.

The levels to watch on the USD pair 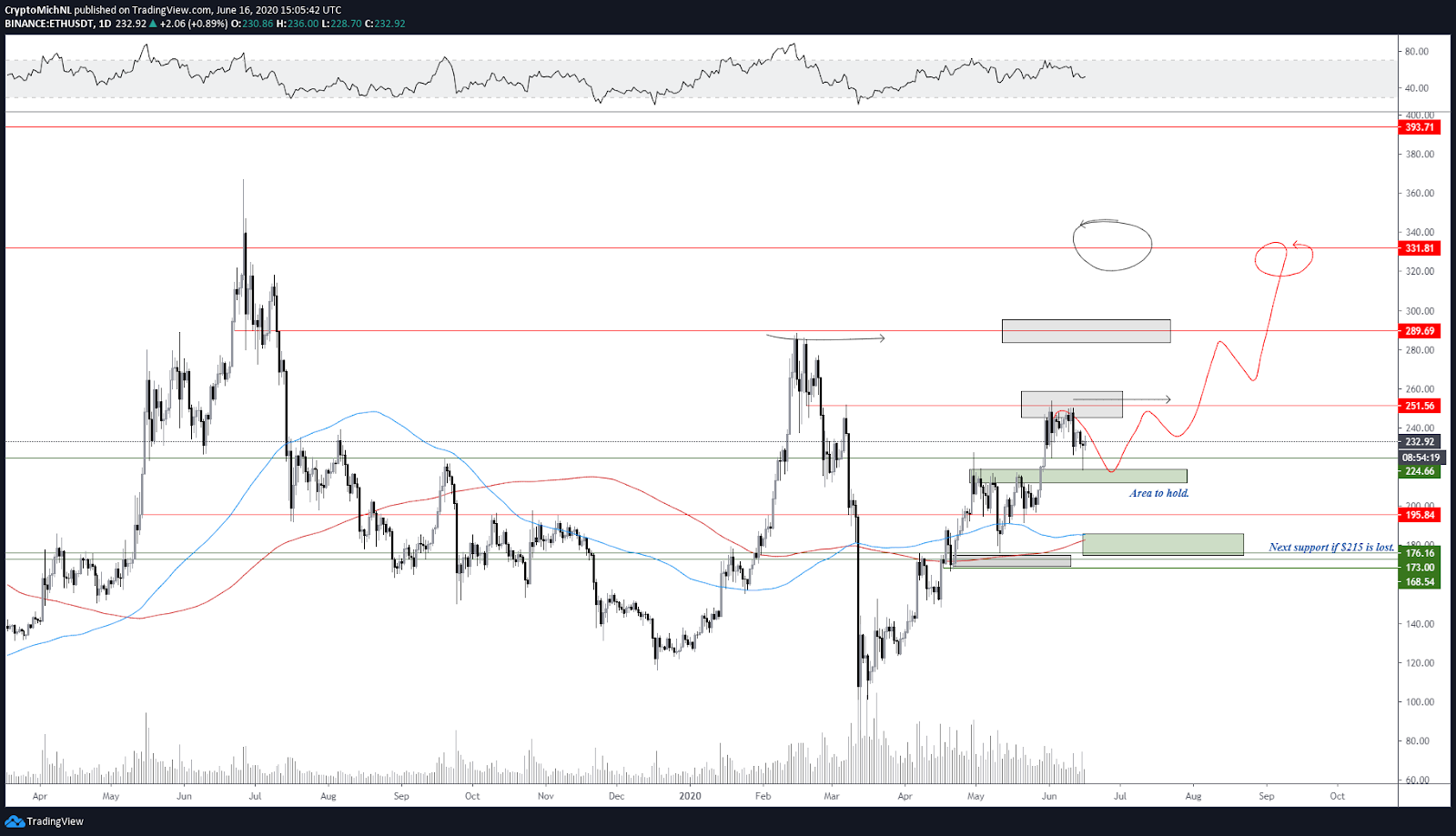 The most likely scenario is shown in the chart above. As the previous resistance of $217–$222 is confirmed as support, a continuation to the upside is likely to occur.

As discussed earlier, the previous rally to $215 showed that consolidation is the most likely occurrence here. In this consolidation, strength can be gathered before the next massive impulse wave starts.

Once Ether's price breaks above the $250 barrier, further continuation toward $290 and $330 are on the tables. In this case, the major resistance area to watch is at $330.

This zone has to remain a support in order to sustain further upward momentum. Otherwise, retests of $100 can even become likely.