The crypto market saw a significant correction today and Ether (ETH) price did not escape the carnage. In the last 24 hours, the top altcoin recorded a 12% drop as the price fell to $331. In the same period, Bitcoin (BTC) price slipped by 6.3% to find support near $10,300.

Ether’s decline comes after a head and shoulders pattern became clear on the daily timeframe and the price slid into a shart downtrend over the past four day. 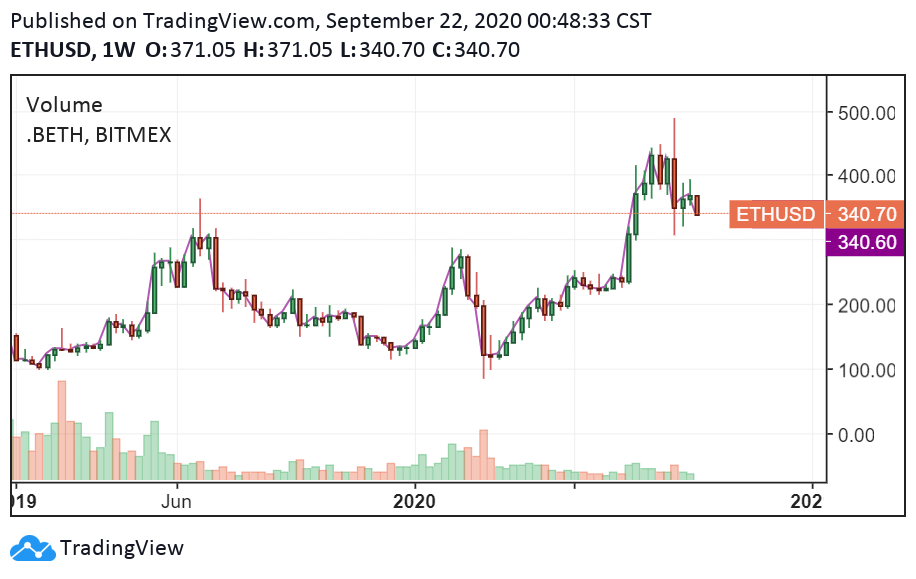 When Ether’s weekly candle opened on Sept. 21 a few technical analysts suggested the likelihood of a bearish retest.

A pseudonymous trader known as “Cred” said Ether might retest the $390 level before seeing a potential pullback. He explained:

“Weekly time frame still looking like a bearish retest of the previous range ($390s). Bitcoin is looking better on the weekly, but also pulling back from daily resistance.”

Since then, Ether’s price declined from $372 to as low as $331 across major cryptocurrency exchanges.

Michael van de Poppe, a Cointelegraph contributor and full-time trader at the Amsterdam Stock Exchange, raised a similar point. Van de Poppe emphasized that the $385 to $395 resistance range signalled that a strong rejection could be on the cards.

Eventually, the rejection of a key multi-year resistance area led the selling pressure on Ether to intensify.

Ether was already facing a clear rejection at a key resistance level before Bitcoin even started to pull back sharply. It appears that Bitcoin’s rejection at $11K simply amplified the near-term downturn of Ether.

In the past three months the Ethereum network has thrived as user activity skyrocketed and various on-chain metrics demonstrated significant demand for Ether.

The explosive growth of the DeFi sector led to overwhelming demand on the Ethereum blockchain network to the point where it started to clog and transaction fees exploded to new highs.

Data from Cryptofees.net shows that Ethereum is processing around $3.77 million in daily fees to miners. In comparison, Bitcoin has been settled around $369,000 in daily fees on average in recent weeks.

Much of the optimistic sentiment around Ethereum revolved around the fast growth of the DeFi space. Hence, when DeFi tokens crashed, it likely placed additional selling pressure on Ether.

On average, DeFi tokens recorded a 40% drop over the past week. Even DeFi giants, like Yearn.finance (YFI), dropped by 46% within the last ten days.

Even before the Bitcoin price drop, Ether was noticeably lagging behind BTC. The price continued to stagnate throughout the past two weeks, while BTC managed to rally from $10,300 to $11,100.

Despite this, over the long term, on-chain analysts remain generally optimistic about the trend of Ether and the Ethereum network.

Ki-Young Ju, the CEO of on-chat data platform CryptoQuant, said the number of weekly Ethereum active users is rising. This data underlies the continuous increase in demand for DeFi platforms and shows that the fundamentals of the network are strengthening.