Despite the large number of opponents and rumors of collusion between Ethereum developers and GPU producers, the ProgPoW algorithm has been supported by 94 percent of the community.

6483 Total views
107 Total shares
Listen to article
0:00
Analysis
Own this piece of history

Ethereum (ETH) network users have unanimously supported the ProgPoW algorithm, which is expected to make the platform resistant to application-specific integrated circuit (ASIC) miners. Initially, opponents of the update prevailed over supporters by a margin of 96 percent, according to a Cointelegraph report on Feb. 15. The current scenario is exactly opposite, with 94 percent of voters favoring the implementation of ProgPoW, as evidenced by the Etherchain charts.

Simply put, ProgPoW is a version of the proof-of-work (PoW) algorithm, which is supposed to smooth the transition of the Ethereum network to proof-of-stake (PoS). As a part of this process, developers are exploring and proposing different solutions to fight off the mining difficulty bomb and make the network stable and resistant to attacks.

One of them is ProgPoW (programmatic proof-of-work), being designed by Ethereum developers to eliminate the gap in efficiency between Ethereum ASIC miners and graphics processing units (GPU) by making ASIC mining less efficient. This is necessary to protect the Ethereum network against a monopoly of ASIC hardware manufacturers.

The principle of the ProgPoW operation is slightly different from other algorithms that are resistant to ASIC miners. It is supposed to make the production of ASICs unprofitable since the manufacture process itself will require more financial and labor resources, and thus won’t pay off.

Making GPU cards more competitive and reducing centralization will be possible through making the task condition for mining impermanent and using all the resources and potential of video cards. The issue is that ASIC miners are designed for one specific task in mind: calculating blocks for mining cryptocurrencies. Meanwhile, video cards are flexible and can perform a number of tasks 一 from mining to transmitting an image.

Using a random task sequence eliminates the possibility of creating a fixed pipeline, as it happens with ASIC miners. In other words, to work with ProgPoW, miners need to be flexible.

Developers plan to reach such results with five innovations, under which the algorithm work will be based on computational capabilities, bandwidth and memory capacity. 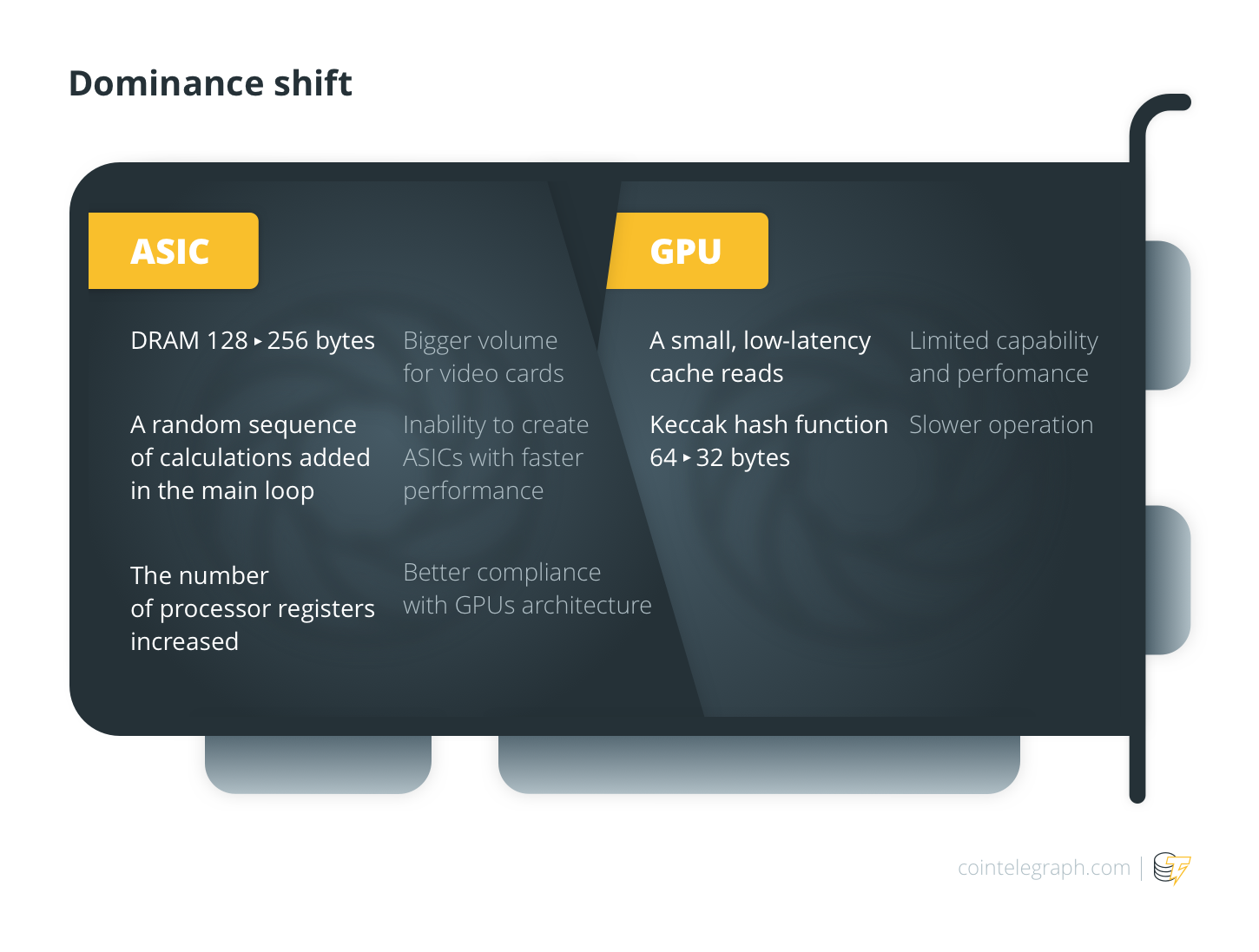 Keccak changes: The Keccak hash function size has decreased from the 64-bit keccak-f1600 to the 32-bit keccak-f800. The latter has been optimized for 32-bit platforms for better compliance with the architecture of video cards.

Increased mix state: This is the number of processor registers in which intermediate values ​​can be stored. They are significantly faster than RAM, because they are located inside the processor. In ASIC miners, chips are small and the number of registers lags behind graphic processors in performance. As a result, ASICs are forced to use RAM to work with this feature, which is several times slower.

Adding a random sequence of calculations in the main loop: The chip makes it impossible to create an ASIC device with a fixed pipeline, which could increase the speed of work or reduce consumption.

Adding reads from a small, low-latency cache with random addresses support: This causes ASICs to follow GPU memory hierarchy rules and limits their capabilities and performance.

DRAM increased from 128 to 256 bytes: Bigger volumes favor video cards. Specialized ASICs are not able to optimize a memory controller for the sake of improved performance.

Why do we need ProgPoW?

The main reason for developing the ProgPoW algorithm is the influence that ASICs have on the cryptocurrency sphere, which jeopardizes the main principle of cryptocurrency 一 decentralization 一 for the sake of making larger profits. Both giants like Bitmain and Innosilicon, and new companies like ASICMiner and Spondoolies, which monopolized the market, became the main reason for finding solutions to prevent centralization.

At the moment, Ethash, which is expected to be replaced by ProgPoW, is considered the most ASIC-resistant algorithm. Meanwhile, among the most vulnerable to attacks algorithms 一 Equihash, CryptoNight, X11 一 the efficiency of using ASICs exceeds that of GPU cards by several times. Ethash ASIC miners give users only a double advantage over video cards.

On April 3, 2018, Bitmain officially announced Antminer E3, capable of producing 180 mega-hashes per second (MH/s), with only 800 watts of power consumption. The ASIC miner model designed to mine ETH inspired other companies to join the ASIC hardware production, with unpleasant consequences for the Ethereum community 一 mainly related to the issues of security and integrity. 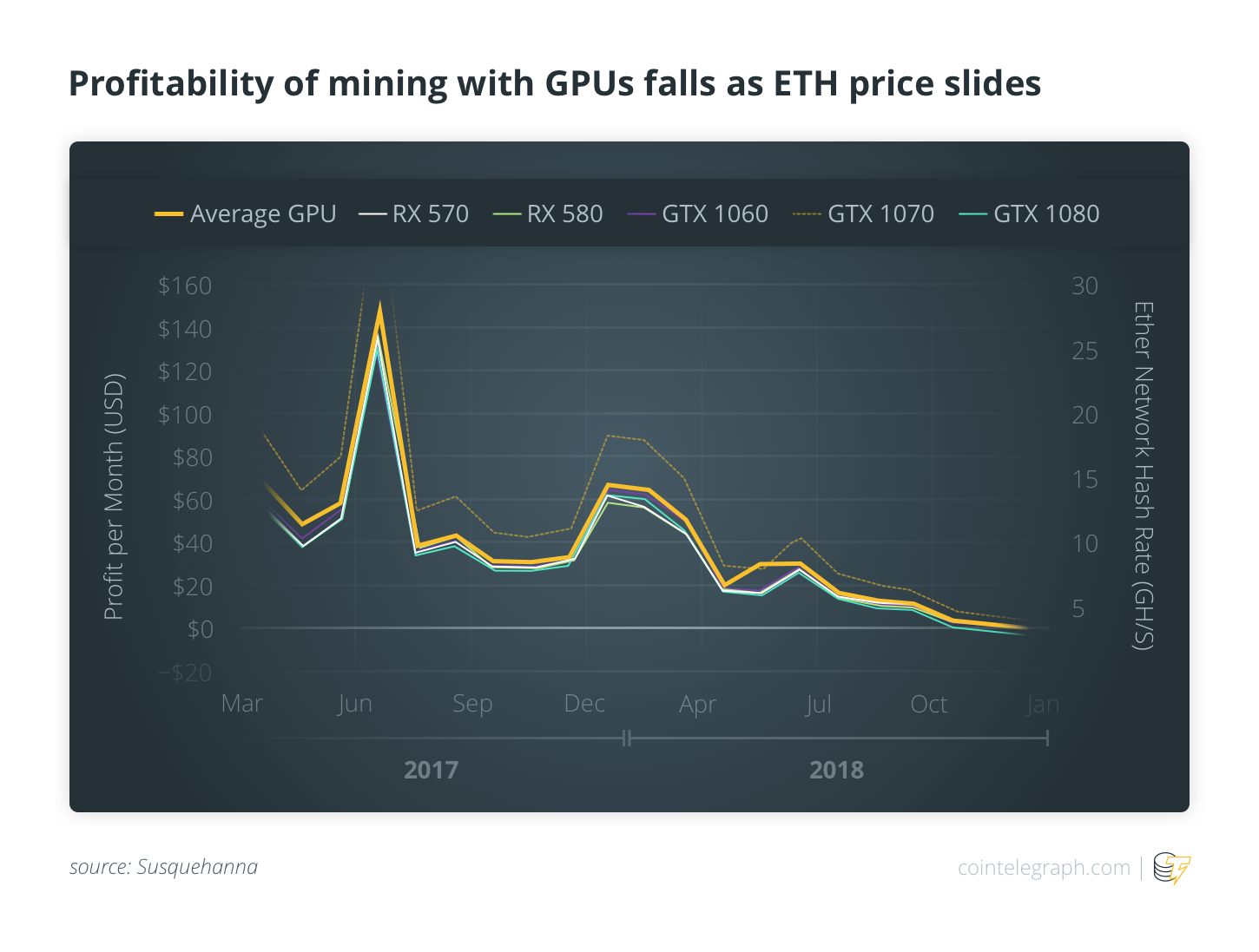 Moreover, hash rate and power became concentrated in fewer hands, which puts the network’s decentralization and security at risk. The reason is the market dominance of such mining giants like Bitmain, which built up its monopoly by producing new ASICs for top coins. The ecosystem has become increasingly centralized and vulnerable to attacks since then.

As new coins appeared on the CoinMarketCap charts, Bitmain stamped mining devices, one after another, for Monero, SiaCoin, ZCash, Bitcoin Cash. Coin developers began to worry about the threat of a 51 percent attack 一 a phenomenon when an attacker with 51 percent of a network’s mining hash rate in their hands is able to manipulate the network.

The last straw was on April 3, when Bitmain developers announced the release of the "world's most powerful and efficient EtHash ASIC" for mining Ethereum and Ethereum Classic.

Since then, the Ethereum Foundation has been working on solving this problem, and as a result, the ProgPoW proposal appeared.

At the moment there are not many programs for mining cryptocurrencies on the ProgPoW algorithm, possibly because of the existing equipment optimization problem. The first cryptocurrency on ProgPoW was Bitcoin Interest (BCI), which was switched to a new algorithm in September 2018. Its developers presented the first miner for the new algorithm.

One of the latest miners that received support from ProgPoW was the TT-Miner chip. It is closed-source software, available only for Windows and running on new Nvidia video cards. Additionally, this miner supports Ethash, UBQhash and MTP algorithms. The developers charge a commission of 1 percent, which is already included in all the devices.

The new algorithm has caused a lot of controversy in the community since it not only protects the network against ASIC mining, but also allegedly gives an advantage to Nvidia video card owners over users who have AMD devices. Vitalik Buterin called it a distraction, while many other developers are skeptical of the new algorithm. In the guidelines for voting, Ethereum developers claimed that, due to a number of trolling messages appearing on social networks, they cannot understand which voting accounts are real:

“We have noticed a lot of trolling and shills on both sides of the debates from anonymous accounts on forums, youtube, telegram, glitter, reddit and twitter. There is no way to know if these accounts are real people who actually have economic stakes in ethereum, or are simply fake troll or shill accounts funded by one side of the debate.”

The developers also don’t exclude a probability of resistance from miners, some of whom may be dissatisfied with the decline in already small incomes. This is evidenced by the relatively small support among the mining pools: Only 35 percent of them supported the upcoming update of the algorithm 一 though Ethermine votes made up 36.5 percent and Sparkpool 27.6 percent of the total number of votes.

Ethermine is the largest Ethereum network pool, which controls 27 percent of its entire hashrate. It is not known how the voices are distributed within the pools, but it can be assumed that the users are divided approximately equally. Thus, for each person who loses revenue as a result of ProgPoW, there is one who may benefit from other miners leaving the network.

Ethereum users have reacted differently to the new algorithm, with some of them being concerned about the possible drop in revenues and others doubting whether this step will be efficient. Martin Koppelmann, CEO and co-founder of Gnosis, thinks that such a radical update should be implemented only if it’s really necessary:

I am against a #progPOW hardfork.
To me there are only two legitimate reasons to hard fork Ethereum.
1) Address an existential threat
2) Bring Ethereum one step closer to a long term sustainable stable state#progPOW is tinkering in favour of one group (GPU miners) vs another.

Jorge Izquierdo, co-founder of Aragon, agreed that ProgPoW is not the number one task for the development of the Ethereum network:

Is anyone really considering changing the POW algorithm of Eth 1.0 now?

I'm not interested in debating whether it is a good idea, just the fact that it shouldn't be a priority at all for Ethereum in 2019. Let's put all our energy towards POS pls. https://t.co/Pk1hPs0zTv

Some experts and users believe that the solution of making ASIC mining unprofitable may lead to more dramatic consequences than the reduction of miners.

For example, Eric Conner, developer of Ethhub.io, suggests that ProgPoW could lead to a chain split:

If ProgPoW causes a chain split, which is worse?

1. ASIC use on the Ethereum network.

2. Brand dilution of the Ethereum name via a chain split? https://t.co/HZXFPK2z8m

Another opposing point of view refers to using GPUs in countries with expensive electricity:

Still not a fan of ProgPoW, it's not good to run GPU's at this high power usages for countries with higher electricity costs than 0.20$/kwh, it might eliminate whole Europe this way amd gets kinda centralized in USA, Iceland and Chinese farms due to low power costs

A number of miners and companies are also concerned about the fact that dominant ASIC producers may manufacture new hardware capable of working on ProgPoW. In particular, the co-founder of Sia, David Vorick, suggested that the new algorithm release won’t stop ASIC producers, and some of them might be able to secretly develop suitable devices in order to prevent possible hard forks.

Alexey Akhunov, one of Ethereum developers, said in a reply message:

“If we want to obsolete the current EtHash mining devices, but at the same time not to induce more secretive behaviour on the part of ASIC manufacturers, we need to ‘embrace’ it and switch to an ASIC-friendly algorithm now instead of an ASIC-unfriendly algorithm. Which [is] the opposite of what we are doing.”

Vorik also assumed that there are several large companies interested in producing special hardware for mining ETH, and the release of such devices would only be a matter of time.

The conspiracy theories are vigorously discussed on the internet, and according to one, the team allegedly working on ProgPoW represents the interests of the leading manufacturers of GPUs 一 Nvidia and AMD.

If you would learn (and I am not claiming that), that #progPOW development was funded by @nvidia or @AMD - would that make a difference in your willingness to support it?

Fuel was added to the fire by a statement of a team representative, who admitted that they have communicated with both Nvidia and AMD:

“We were lucky enough to have an email review that included engineers from the Ethereum Foundation, Ethereum Core Devs, Nvidia and AMD. The Nvidia and AMD engineers gave the algorithm a generally positive review.”

However, the allegations related to any agreements or conspiracies haven’t been proven, yet.

Despite the fact that the update launch date is still unknown, the preparation for it is well under way. Ethereum Cat Herders, the group working on Ethereum hard forks, is going to audit the ProgPoW code once the voting ends. At the moment, developers are searching for companies to do the audit and are trying to raise $100,000 to perform it.

Meanwhile, Parity Technologies already integrated full ProgPoW support into its client, and other clients are testing the update, which means that the release may be just a matter of weeks away. Developers are also discussing the possibility of including the ProgPoW update in the next Istanbul hard fork in case two third-party audits doesn’t reveal any significant bugs or potential threats to the network.