As markets began reacting to sentiment from China on Friday, Bakkt was already capitalizing on fresh institutional interest, transforming its trading activity.

Compared to just 331 contracts ($3.1 million) on Thursday, the increase in just 24 hours was 257%, dwarfing previous jumps, which themselves had resulted in all-time highs earlier in October. 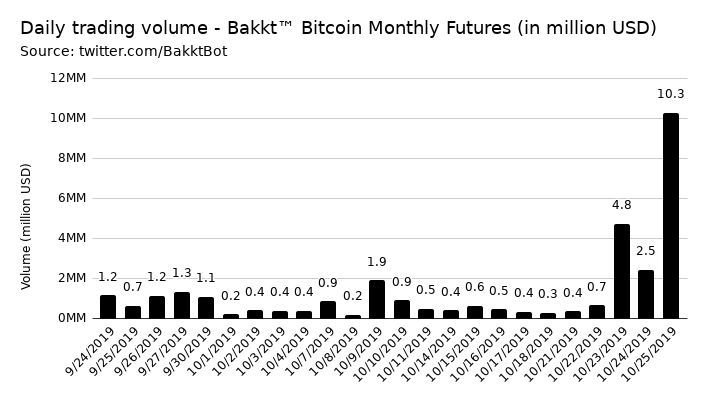 At press time Monday, daily trading amounted to 240 BTC ($2.3 million), with the majority of the trading day still to come.

Bakkt’s performance clearly benefited from the news that China had opted to officially embrace blockchain technology. When it broke late last week, Bitcoin reacted immediately, going on to reach local highs of $10,500.

Nonetheless, compared to its launch in September, Bakkt’s success is all the more remarkable. As Cointelegraph reported at the time, opinions were split on Bakkt’s futures — day one saw just 71 BTC (around $700,000 at the time) traded.

In the near future, industry players believe institutional tools will continue to support Bitcoin. In particular, the appearance of custody solutions for investors should spur additional influxes, serial investor Mike Novogratz forecast in an interview last week.

Bakkt is preparing to debut a custody service, having announced Bitcoin regulated options trading on Wednesday. Novogratz is also bringing his own to market.