Bear Cross on Key Indicator Could Push Bitcoin Price to $7,300

Bitcoin remains pinned below $8K as the 128 and 111-day moving average are on the verge of a bearish cross which could drop the price below $7,700.

At the moment, not too much is happening with Bitcoin’s (BTC) price action. The price continues to drop and a series of lower highs occur even as bullish news hits the press week after week. The news of Bakkt Bitcoin futures trading volume increasing by 796% failed to positively impact Bitcoin price and Fidelity Investments’ announcement that it has launched crypto custodial services also did little for the market.

The general sentiment amongst Bitcoin traders seems relatively unenthusiastic and many traders view Bitcoin’s current price action as an opportunity for accumulation at $7,800 and below.

This conclusion is supported by the Crypto Fear and Greed Index (CFGI) which currently shows investor’s fear level as being flat throughout the month of October. If the $7,800 support fails to hold and Bitcoin drops to $7,300 and below, then one would expect the fear index to rise. 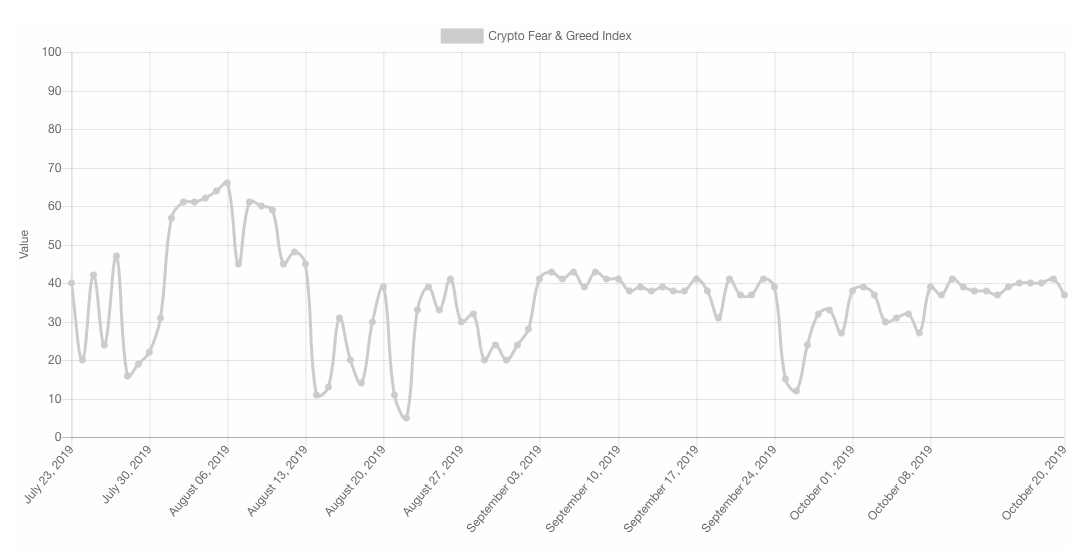 Below are the top altcoin performers compared against Bitcoin:

With that said, Bitcoin is again approaching an important point and it seems likely that volatility could increase over the next 24 to 48-hours. Let’s take a closer look at the charts to see where Bitcoin stands.

Bitcoin is bearish on nearly all time frames 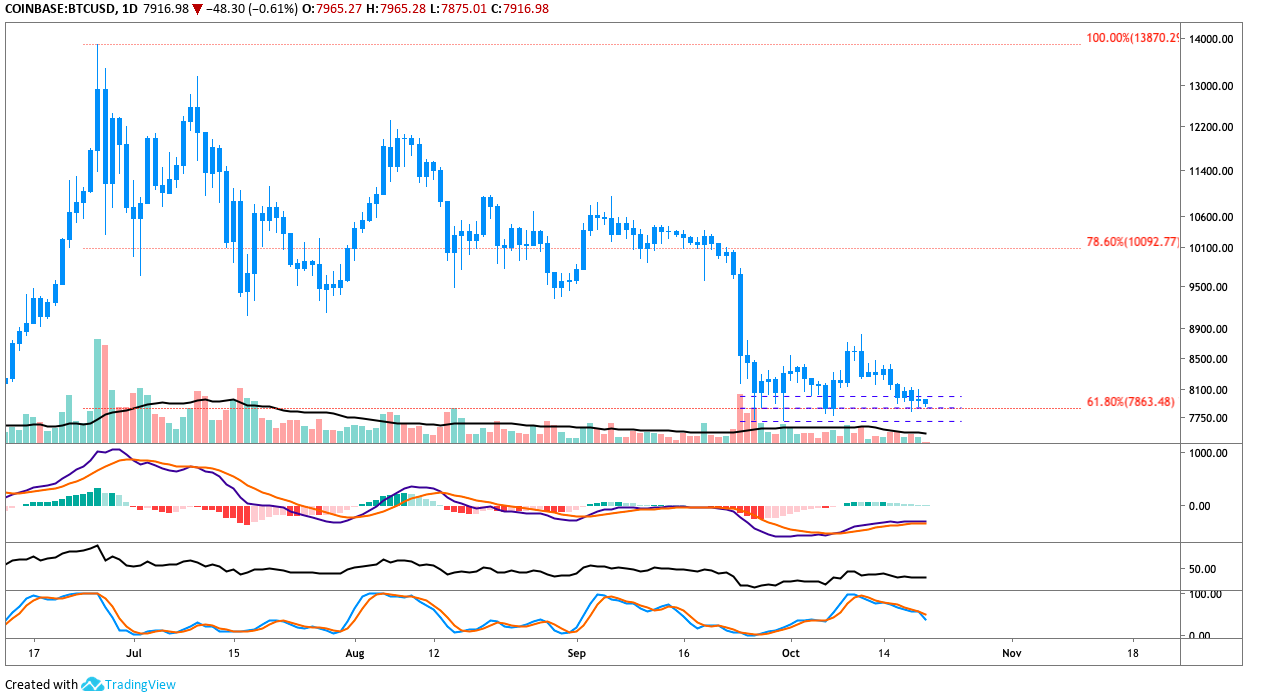 As shown by the daily chart, Bitcoin price is approaching the double bottom at $7,775 and $7,714. As mentioned previously, a drop below these levels could see the price slink down to $7,300.

The pattern of lower highs could eventually give way to lower lows as was demonstrated in September when Bitcoin’s price was in the low $9,000s. Multiple retests of supports tend to give way to downside breaks and this could be weighing on investors’ appetite for making purchases around the $7,800 area.

One will also notice that the 200-day moving average has flattened and Bitcoin price continues to peel away from the indicator which many traders describe as being crucial. 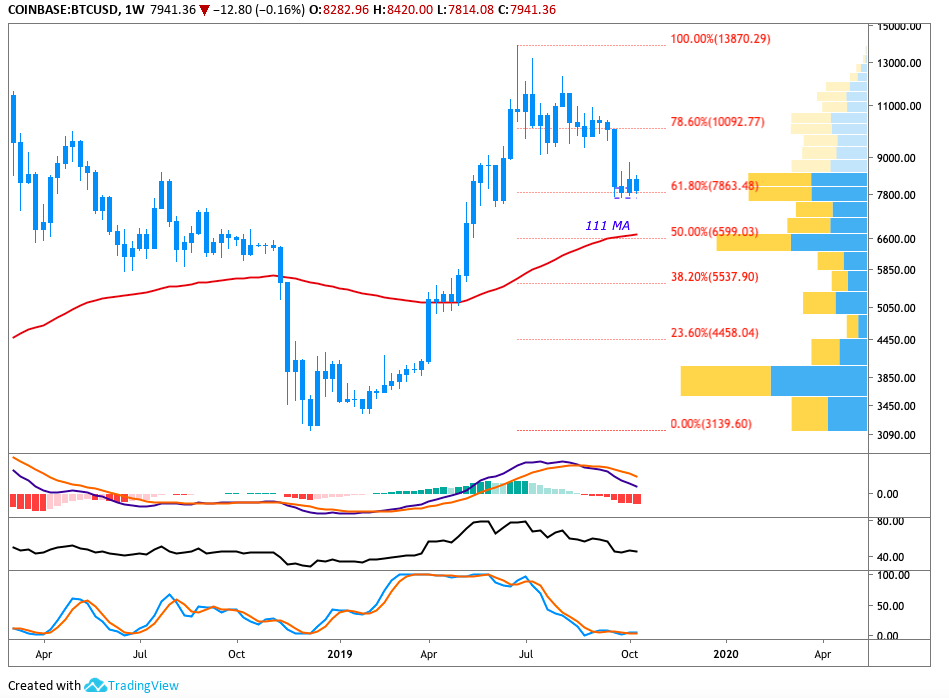 On the weekly time frame the 111-day moving average lines up with the 50% Fibonacci Retracement level at $6,600 and the volume profile visible range (VPVR) also shows an increase in purchasing volume at this price.

The weekly Stoch RSI still shows a bull cross which is a slightly encouraging sign.

Earlier this week market analyst Philip Swift suggested that it was time to pay closer attention to the longer-term moving averages and he pointed out that:

“When these two moving averages cross it causes a significant directional market move...as seen here the last two times they crossed...and they are about to cross again!” 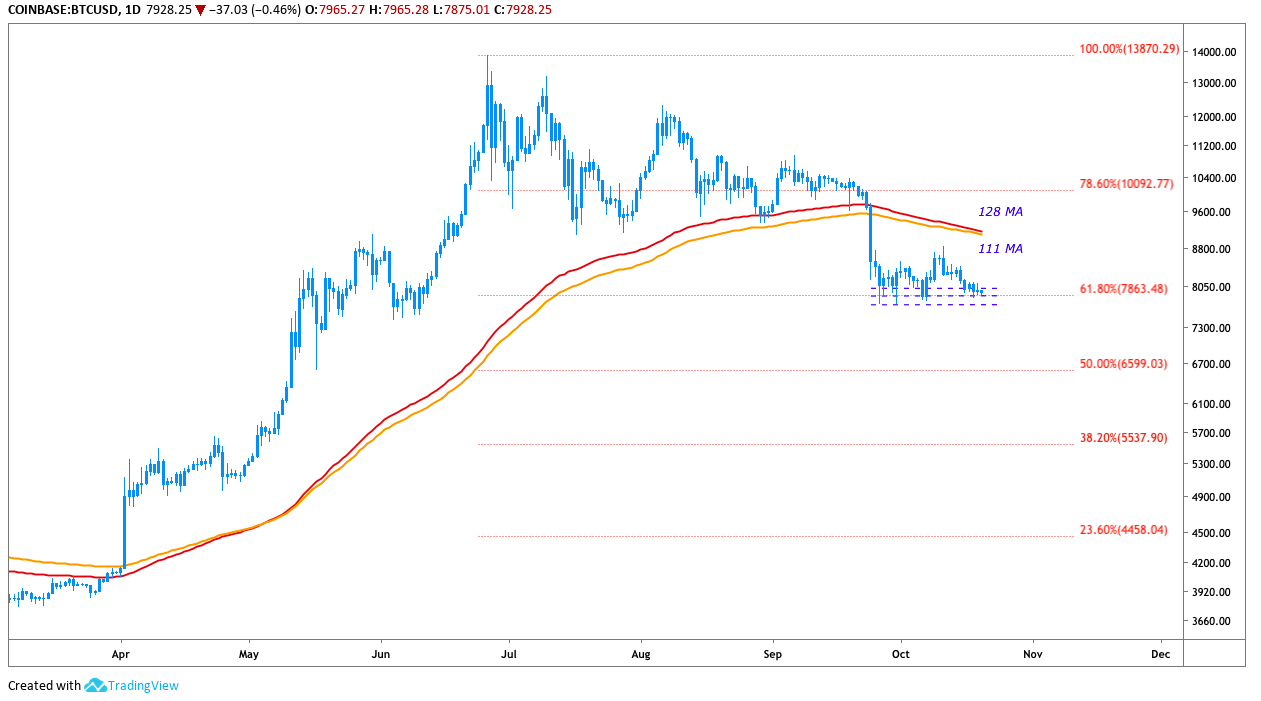 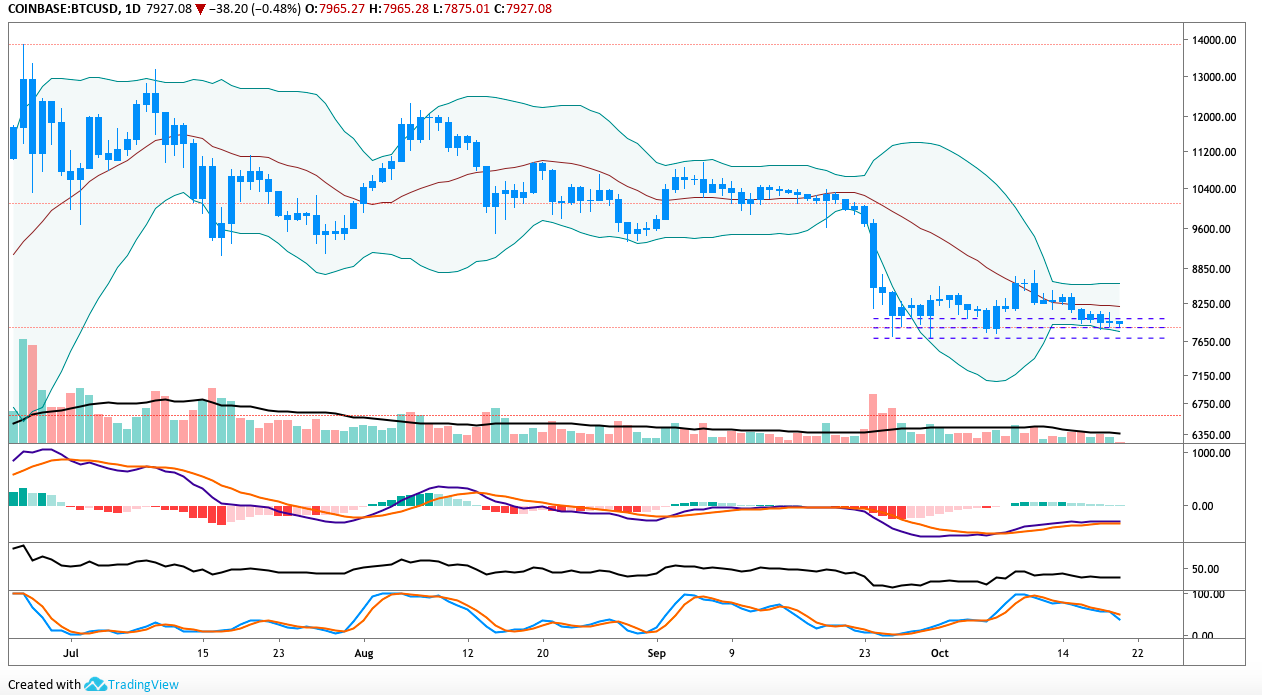 As the week progressed, buy and sell volume has slowly tapered off and the Bollinger Bands have tightened as price constricts to a narrowing range. These are all indicators that the price is on the verge of making a move.

Throughout 2019 high volume spikes tended to occur on weekends near the weekly close so here we find ourselves in yet another familiar trading predicament. Some traders have pointed to the bullish divergence currently seen on the daily moving average convergence divergence (MACD) as a sign of positive price action for Bitcoin but the MACD is also on the verge of dropping below the signal line.

Traders who swear by the MACD should keep an eye on this impending convergence, along with the MACD histogram to see if it drops below zero and flashes pink.

Over the past two weeks Bitcoin has frequently revisited the zone around the double bottom and while this shows that there is buying interest at this price, failure to rise above $8,000 to $8,500 also shows that sellers wait overhead. The near-equal buy and sell volume on the VPVR also supports this interpretation.

Lately, not much has changed with Bitcoin’s market structure and the price seems to be ranging. Lower lows have yet to be set but if the price below the support areas (dotted lines) on the daily chart the situation could rapidly change.

As mentioned earlier, Bitcoin bulls need to push the price to $8,450 and then knock out last week’s high at $8,835 to flip the short-term trend bullish. Until then, it seems likely that traders will be taking up positions in the larger cap altcoins.