There’s been plenty of drama on the crypto markets this week — Bitcoin surged to $12,000 only to crash spectacularly, and Ether has continued to rally.

After weeks of stagnation, Bitcoin finally roared to life this week. Late on Monday, the world’s biggest cryptocurrency surged to a new 2020 high of $11,394. The bull run meant almost 95% of Bitcoin’s supply was in profit. Bloomberg released a mid-year report predicting BTC could soon rise above $12,000, with on-chain and off-chain indicators suggesting that the asset will appreciate. Indeed, hodlers didn’t have to wait long for the next surge. As the weekend began, BTC surpassed $11,600 for the first time in 12 months, prompting some investors to believe there would be little resistance until $15,000. There was further excitement as Bitcoin surged even further to $12,000 — but unfortunately for the bulls, the market drama was far from over. On Sunday, Bitcoin plunged by 13% within minutes, taking it as low as $10,550. Low trading volumes on weekends and a market that was heavily swayed to longs or buyers might have been to blame for the sudden cascade in liquidations. With the Fear and Greed Index hitting a score of 80 — indicating “Extreme Greed” — the question now is whether the crypto world needs to brace itself for a larger pullback.

The other big story has been Ether’s extraordinary march from $225 to $400 in the space of two weeks, coinciding with its fifth anniversary. Many investors believe ETH’s momentum has been buoying the entire market — and possibly even pushing BTC upwards. Three factors appear to be triggering the strong rally: decentralized finance, the upcoming Ethereum 2.0 upgrade and the prolonged rally in the altcoin market. With Ether reaching two-year highs, some crypto traders have warned that a pullback may be on the horizon. Edward Morra said: “Yeah, parabola coming out of another parabola is a sight to behold tbh. Also, this isn’t sustainable and will correct. If you are new to this space — buy dips, don’t FOMO at the top.” According to the market data aggregator Messari, Ether is now the best-performing asset class of 2020. However, there could be some clouds on the horizon. Kosala Hemachandra, the founder of MyEtherWallet, has told Cointelegraph that the fully-fledged version of Ethereum 2.0 could be years away after suffering repeated delays.

Bitcoin and Ether aren’t the only digital assets posting outsized gains. Just look at XRP, which has managed to reclaim its position as the world’s third-largest cryptocurrency in terms of market cap. Its value has risen by 32.74% in the past week — that’s more than BTC and ETH put together. The number of accounts holding more than 1 million XRP (about $287,000 at the time of writing) has increased by 3.7%, with 30 new whales appearing over the last two weeks. There’s no obvious reason behind the recent increase in whales except for speculation. Despite XRP leapfrogging Tether in the rankings, it is worth remembering that Ripple is also the currency in court facing a class-action lawsuit from investors.

U.S. printed more money in one month than in two centuries

Now here’s a stunning statistic: The U.S. printed more money in June than in the first two centuries after its founding. That’s according to Pantera Capital CEO Dan Morehead, who has been looking into the levels of quantitative easing that the Federal Reserve has deployed to combat the economic fallout from the coronavirus pandemic. In a letter to investors, he said: “[In June] the U.S. budget deficit — $864 billion — was larger than the total debt incurred from 1776 through the end of 1979.” Morehead made it clear that his company sees Bitcoin as a solution for the current crisis — and said the inflation caused by rampant QE as the main reason people should “get out of paper money and into Bitcoin.” 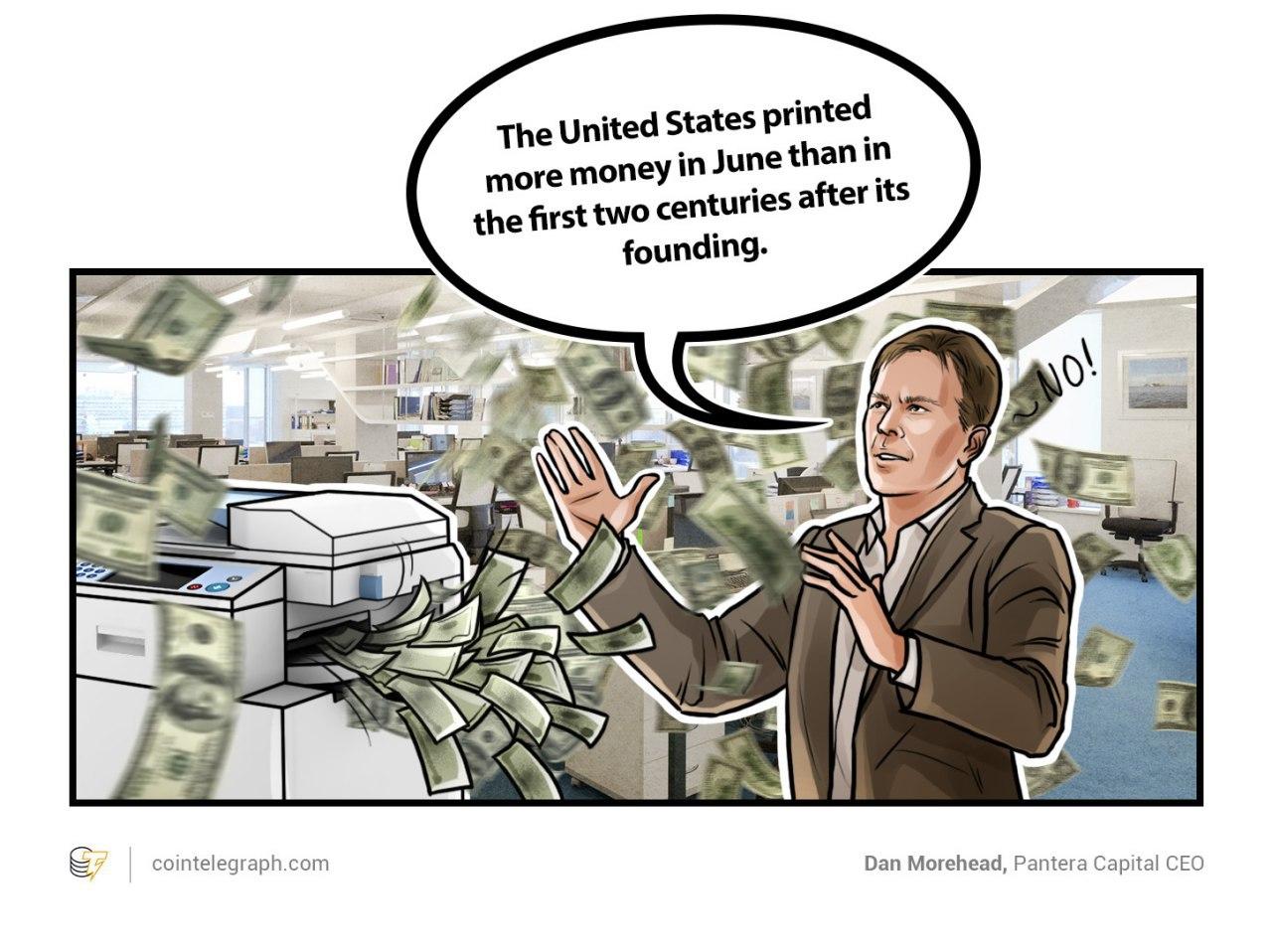 It’s emerged that a teenager is among those who have been taken into custody in relation to Twitter’s massive hack. The 17-year-old was arrested in Tampa, Florida, and has been accused of being the mastermind behind the biggest security and privacy breach in the social network’s history. The devastating exploit saw many top Twitter accounts breached on July 15 — including profiles belonging to Elon Musk, Joe Biden and Bill Gates. Hillsborough State Attorney Andrew Warren said: “Make no mistake, this was not an ordinary 17-year-old. This was a highly sophisticated attack on a magnitude not seen before. It could have been an extremely high amount of loss.” Two others have been arrested. One of them is 19-year-old Briton Mason Sheppard, also known as “Chaewon.” The other is 22-year-old Nima Fazeli, who lives in Florida and is also known as “Rolex.” 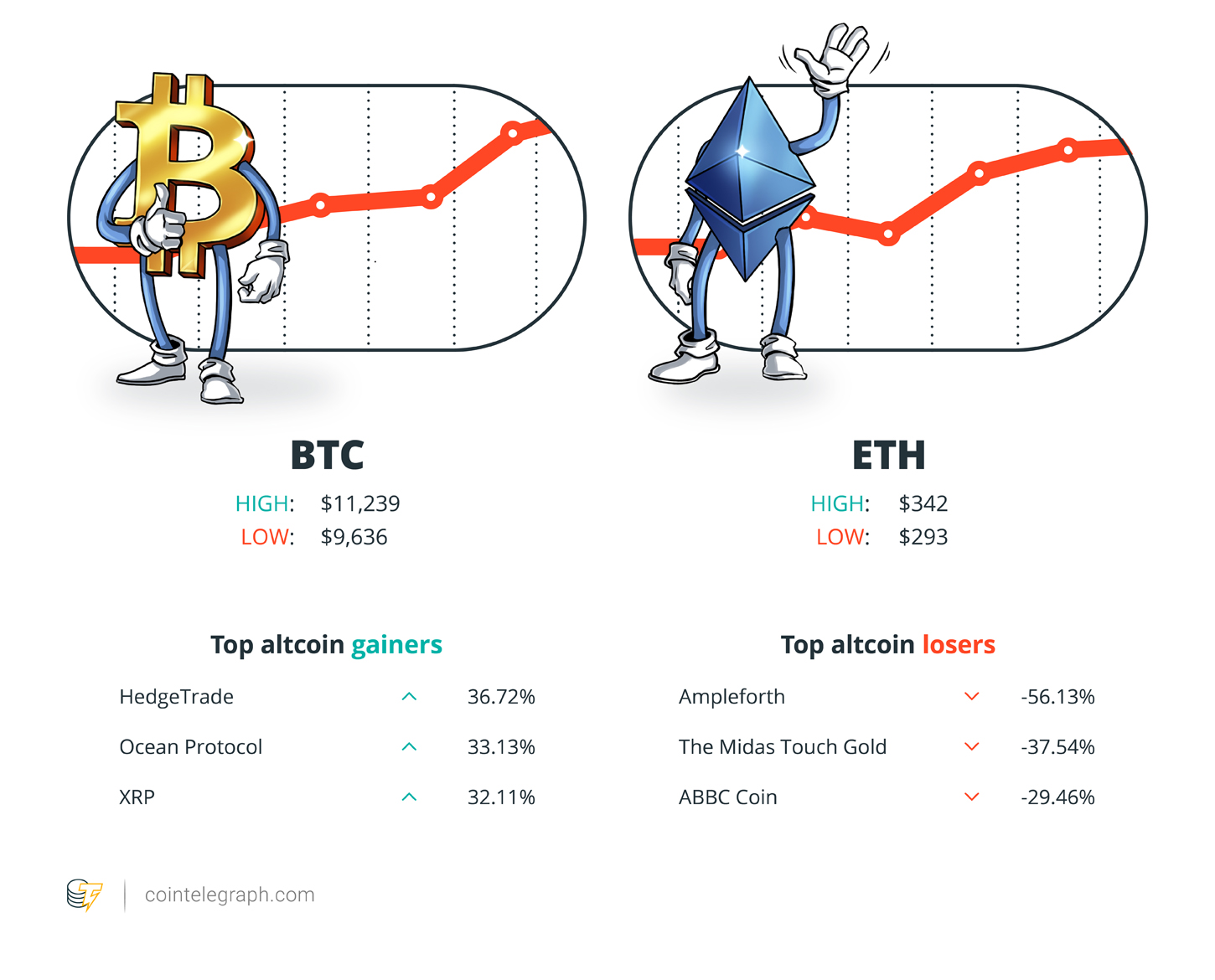 “I think the full reality of ETH 2.0 is at least a couple of years away.”

“It’s been very slow going with blockchain in real estate, despite it being touted as a game-changer for a number of years now.”

“With innovations and hype around DeFi, we started to see prices decouple within the crypto space. Ethereum is an enabler and we saw a much stronger gain over the last few weeks, alongside gains from other DeFi tokens.”

“Gold is absolutely transportable and harder to confiscate than Bitcoin.”

“The 2019 Bitcoin end-of-day high was $12,734, based on Bloomberg pricing. Unless advancing addresses abruptly reverse, history suggests Bitcoin may gravitate toward that level.”

Winklevoss twin: Next Bitcoin bull run will be “dramatically different”

Cameron Winklevoss, the founder of the Gemini crypto exchange, has predicted that Bitcoin’s next bull run will be “dramatically different” to what we’ve seen before. On Twitter, he wrote: “Today, there’s exponentially more capital, human capital, infrastructure, and high-quality projects than in 2017. Not to mention the very real specter of inflation that all fiat regimes face going forward. Buckle up!” Earlier this week, the billionaire warned that “not owning Bitcoin today will be a worse investment decision than not investing in AAPL, GOOG, AMAZN and MSFT in the early 2000s.” His twin brother, Tyler, has also been getting involved in the tweeting spree, writing: “Bitcoin is not just an investment, it’s an indication of who has a growth mindset and who doesn’t.” 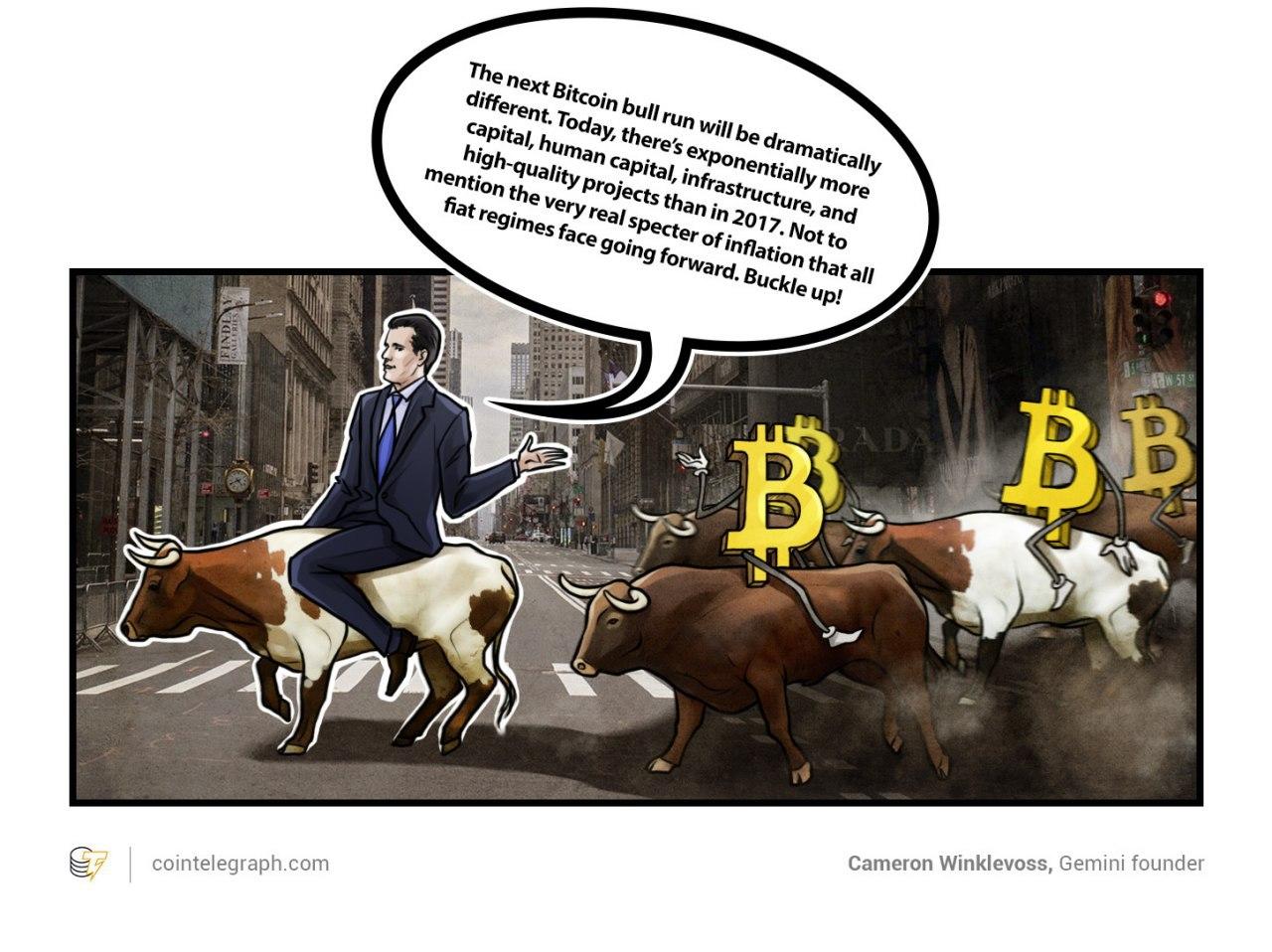 As many as 27 core PlusToken team members have been arrested by police in China. It’s a significant development in the case, which has gained infamy for being one of the largest scams in the crypto industry’s history. Estimates suggest that investors lost $5.7 billion — and local industry publication ChainNews has reported that another 82 core members of the scheme have also been arrested. PlusToken was initially presented as a South Korea-based exchange offering high investor returns. Eventually, the entire operation was exposed as a scam after several million participants found they were unable to withdraw their investment.

Hackers are actively relying on the Dogecoin blockchain to expand a malware payload called “Doki,” according to cybersecurity researchers at Intezer. It’s claimed Doki is a fully undetected backdoor that abuses the DOGE blockchain “in a unique way” to breach cloud servers. Intezer says that using Dogecoin to deploy a crypto-unrelated malware may be “quite resilient” to both law enforcement and security products. That’s why Doki has managed to stay undetected for over six months, despite having been uploaded to the VirusTotal database in January. The researchers added that such an attack is “very dangerous,” as it can take just a few hours to be infected by this campaign.

As the initial coin offering boom subsided and the 2018 crypto bear trend began to set in, many analysts predicted that security tokens may drive the next market cycle. The vast capital locked in the real estate sector was eyed hungrily for tokenization — but with the industry’s attention focused on the Bitcoin halving, Ethereum 2.0 and DeFi, it appears tokenizing property is no longer the flavor of the month. Matthew McAuley, the director of global research at JLL, wrote in The Investor: “It’s been very slow going with blockchain in real estate, despite it being touted as a game-changer for a number of years now.” Despite properties being sold using crypto in 2017, with fractionalized ownership in a five-star resort being offered the following year, a lack of institutional appetite meant projects dried up in 2019. McAuley warned: “I find it difficult to believe blockchain will be as used, or as useful, in real estate as was thought initially.” 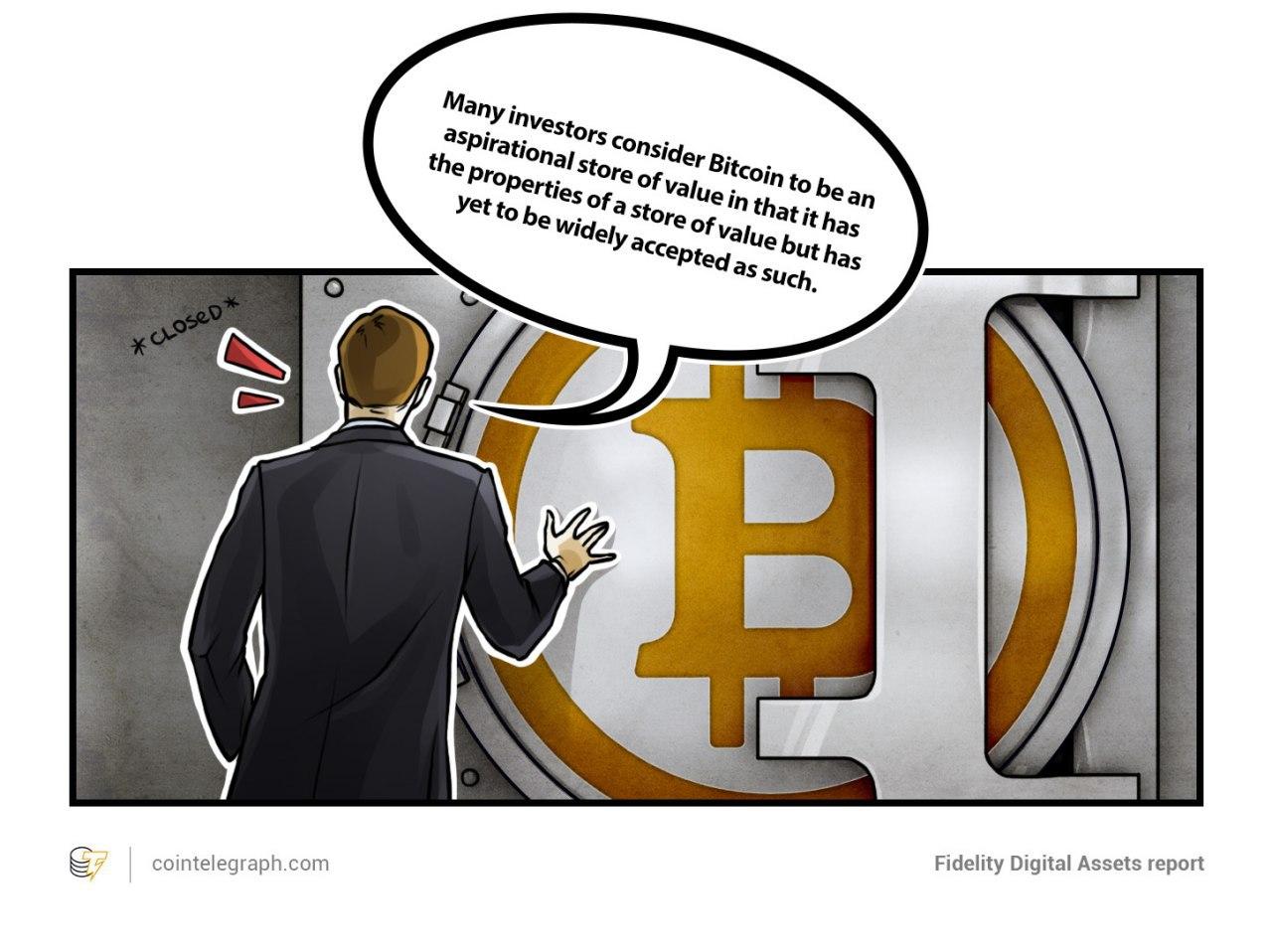 Five years since launch, is Ethereum creating a new boom?

The Ethereum network turned five years old this week. António Madeira takes a look at whether ETH is creating a new boom — and whether DeFi will suffer the same fate as ICOs.

After the U.S. Senate pros and cons on digital money — What do we do with it?

Andrew Rossow argues that the crypto industry has the best historical moment to change the discourse about digital assets and transform its reputation.

Global payment processors Mastercard and Visa are laying the foundations for crypto support that may drive adoption on a global scale. Gareth Jenkinson has more.