Bitcoin Miners Made $14 Billion to Date Securing the Network

There’s more money in the game for miners than ever before, as all-time revenue for Bitcoin mining tops $14 billion.

All-time revenue for Bitcoin (BTC) miners has topped $14 billion, according to fresh data from Coin Metrics.

As Yahoo! Finance reported on Aug. 30, despite the massive increase in the network’s hash rate — a factor that depresses the profitability of mining — there’s still more money in the game for miners than ever before.

The report notes that as of the Bitcoin network’s inception, it took eight years for miners’ total revenue to break past the $5 billion mark; the next $5 billion were exponentially faster, taking only a further eight months for revenue to break $10 billion.

If current mining profitability remains on track, the $20 billion revenue mark will be broken sometime in early 2020. 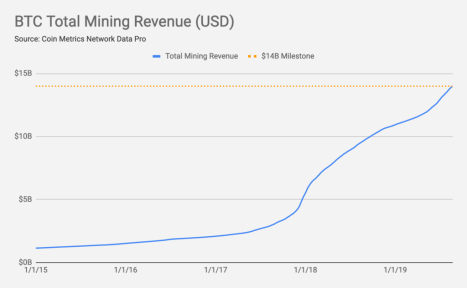 The $14 billion figure is all the more impressive given that the network’s hash rate has been on a tear for several months now: continuing to break previous records throughout summer — with a new all-time-high posted just today, at 83.5 TH/s by press time.

A higher hash rate indicates that miners are expending record levels of computational processing power to solve and validate blocks — and pocket their rewards.

Higher compute intensivity translates into higher operational costs for miners — yet the robust revenue increase indicates this factor has not critically dented profitability.

Looking ahead, Bitcoin is under a year away from its next halving — a pre-coded 50% reduction of block rewards for miners — which is slated for May 2020.

While the halving can have bullish implications for a cryptocurrency’s price (by increasing scarcity), its impact on miners is keenly watched, with some concerned that lower block rewards will deter network participants and thus adversely impact the network's hashing power.